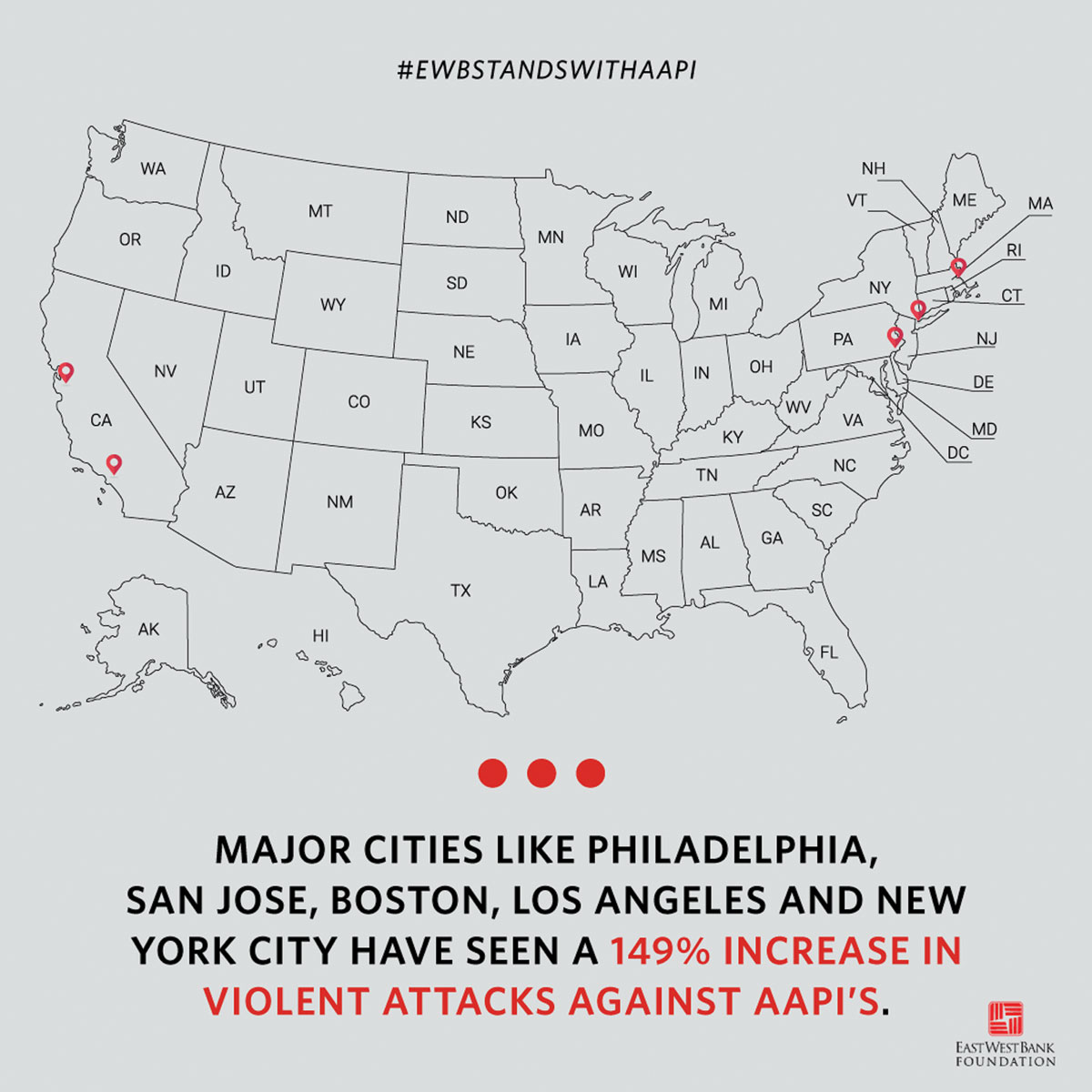 The East West Bank Foundation is supported through East West Bank, one of the top 25 largest banks in the U.S, and the largest minority depository institution in the nation.

Founded in Los Angeles Chinatown in 1973, East West Bank was created with a mission to serve the banking and financial needs of Asian Americans and other underserved communities.

The recent rash of violence and hate crimes is tragic and particularly alarming as the victims are from the communities that East West Bank serves. “When our customers, co-workers, family, friends, and innocent members of our community are being attacked and are the victims of hate, we must stand together and support each other,” stated Dominic Ng, Chairman and CEO of East West Bank.

“East West Bank has a long-standing history and commitment to the AAPI community, and they are a great corporate citizen. Their willingness to provide assistance and stand with us is a testament to their leadership and that of their CEO Dominic Ng,” said California Assemblymember Evan Low, Vice Chair of the California Asian Pacific Islander Legislative Caucus.

Violent incidents are occurring throughout the country, and the AAPI community needs resources to stem the rising tide of hate. According to an analysis released by the Center for the Study of Hate and Extremism, anti- Asian hate crimes increased by nearly 150 percent last year. The unprecedented scale of these incidents is so dramatic, President Biden recently condemned the violence against AAPIs in his first national primetime address, stating that “at this very moment, so many of them, our fellow Americans, are on the front lines of this pandemic trying to save lives and still — still are forced to live in fear for their lives just walking down streets in America. It’s wrong, it’s un-American, and it must stop.”

The East West Bank Foundation will provide financial contributions to organizations leading the fight to stop the hate and advance the civil and human rights of AAPIs throughout America, including: Stop AAPI Hate; Asian Americans Advancing Justice; Asian Pacific American Leadership Foundation; Asian Pacific Community Fund; OCA-Asian Pacific American Advocates chapters in California, New York, Texas, and Georgia; and Center for Asian Americans United for Self-Empowerment, among others. Promoting diversity and fighting discrimination have been a focus of giving by the East West Bank Foundation since its founding, and these contributions are a continuation of that focus.
Stop AAPI Hate was founded in March of 2020 to track and respond to incidents of hate, violence, harassment, discrimination, and child bullying against AAPIs in the United States. “Violence against AAPIs is an ugly stain on America and unfortunately is part of our country’s history. We are outraged by the sheer number of incidents across our country, and East West Bank’s generous support goes a long way to support our grassroots efforts,” said Vincent Pan, Co-Executive Director of Chinese for Affirmative Action, a founding organization of Stop AAPI Hate.

Asian Americans Advancing Justice (AAAJ) has created the Stand Against Hatred platform to empower AAPIs to share their stories and “document hate” to educate, inform and motivate action. “East West Bank’s contribution is consistent with the bank’s history and involvement in the community. Their support will enable us to expand our reach throughout America to help address the hatred and institutional racism that plague every community,” said Connie Chung Joe, CEO, and Stewart Kwoh, President Emeritus, of AAAJ-Los Angeles.

Leadership is important in setting the proper tone for the nation. When leaders embrace diversity and inclusion, it makes for a better America. The Asian Pacific American Leadership Foundation was founded in 2004 to foster leadership and civic engagement among AAPIs. “Until we have leaders that look like us across America, we will always be second-class citizens in our own home. Our elected leaders have the power to enact policies, create new anti-discrimination laws and help enforce our laws. We applaud East West Bank for their corporate leadership – they are a model for other companies to follow,” said James Lau, Executive Director of the Asian Pacific American Leadership Foundation.

Assemblymember Bonta said “all leaders have a role in creating a safer and more just world. This announcement by East West Bank and CEO Dominic Ng is great news, and I hope more can follow in their example.”

PH, US to celebrate 75 years of diplomatic relations

Report: 1 in 5 AAPIs experienced a hate incident in the past year