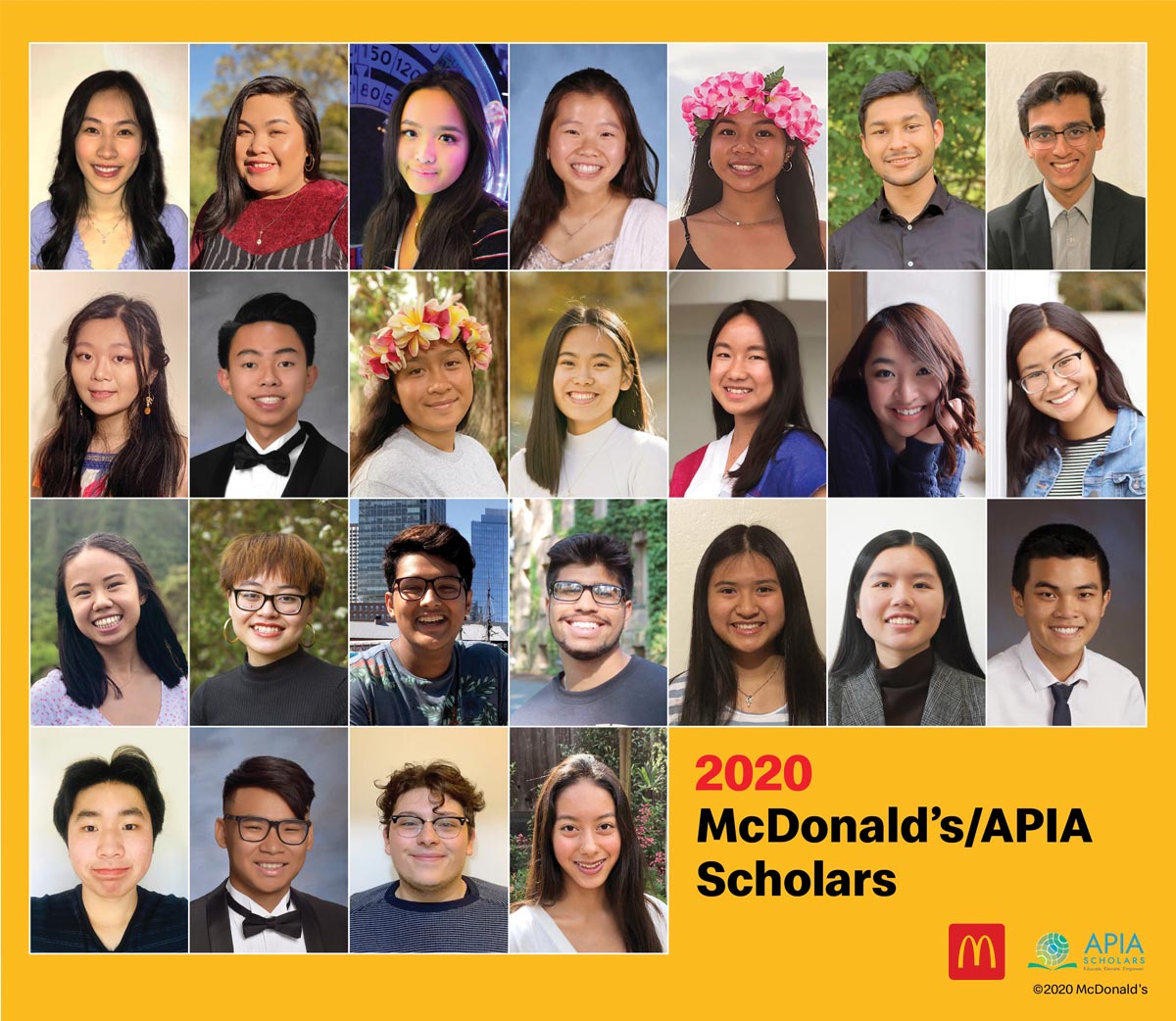 CHICAGO – McDonald’s USA is thrilled to announce the inaugural class of McDonald’s/APIA Scholars. Through this program, the company is awarding $500,000 in scholarships to 55 Asian and Pacific Islander American (APIA) college students.

Established in November 2019 in partnership with APIA Scholars, the scholarship underscores McDonald’s commitment to educating and supporting future leaders, a commitment that remains unchanged during the COVID-19 pandemic.

The McDonald’s/APIA Scholarship recognizes the disparities within the community and seeks to help bridge the gap, while providing much needed financial support and opportunities for APIA students.

“When we created the McDonald’s/APIA Scholarship program last year, we had no idea that the need for educational support would become greater as a result of the pandemic,” said Jimmy Ferguson, a Texas-based McDonald’s Owner/Operator and APIA Scholars board member. “McDonald’s has always invested in the education of students and future leaders, so we couldn’t be happier to lend a hand and provide financial support for APIA students who are making their dreams of higher education come true.”

While back-to-school plans remain unclear for many, APIA students also face other limiting factors in their education attainment journey. The APIA community has been hit disproportionately with economic hardships as a result of the pandemic, with one-in-five likely to be unemployed according to Pew Research Center, which directly impacts students and their family’s ability to pay for higher education. Often labeled as a model minority, there are tremendous educational and economic disparities within the APIA community that are often overlooked. According to APIA Scholars, the top 10% of APIAs earn more than 10 times the bottom 10% of APIAs. And while half of the community have college degrees, only 25% of all Native Hawaiians, Pacific Islanders, and Southeast Asian Americans finish higher education.

The scholarship application period is currently open and runs through January 14, 2021. Students and parents are encouraged to learn more or apply at http://www.apiascholars.org.

McDonald’s education programs include the HACER® National Scholarship for Hispanic students and the McDonald’s Black and Positively Golden Scholarships for students attending Historically Black Colleges and Universities. McDonald’s has also increased education access to over 55,000 and awarded more than $100M in tuition assistance for restaurant employees through Archways to Opportunity.

McDonald’s USA, LLC, serves a variety of menu options made with quality ingredients to nearly 25 million customers every day. Ninety-five percent of McDonald’s 14,000 U.S. restaurants are independently owned and operated by businessmen and women. For more information, visit www.mcdonalds.com, or follow them on Twitter @McDonalds and Facebook (www.facebook.com/mcdonalds).

APIA Scholars works to create opportunities for students to access, complete, and succeed after post-secondary education; thereby developing future leaders who will excel in their career, serve as role models in their communities, and ultimately contribute to a vibrant America. Since 2003, APIA Scholars has awarded more than $150 million in scholarships to deserving APIA students. APIA Scholars manages three scholarship programs: APIA Scholarship, the AANAPISI Scholarship, and the Gates Millennium Scholars/Asian Pacific Islander Americans funded by a grant from the Bill & Melinda Gates Foundation.