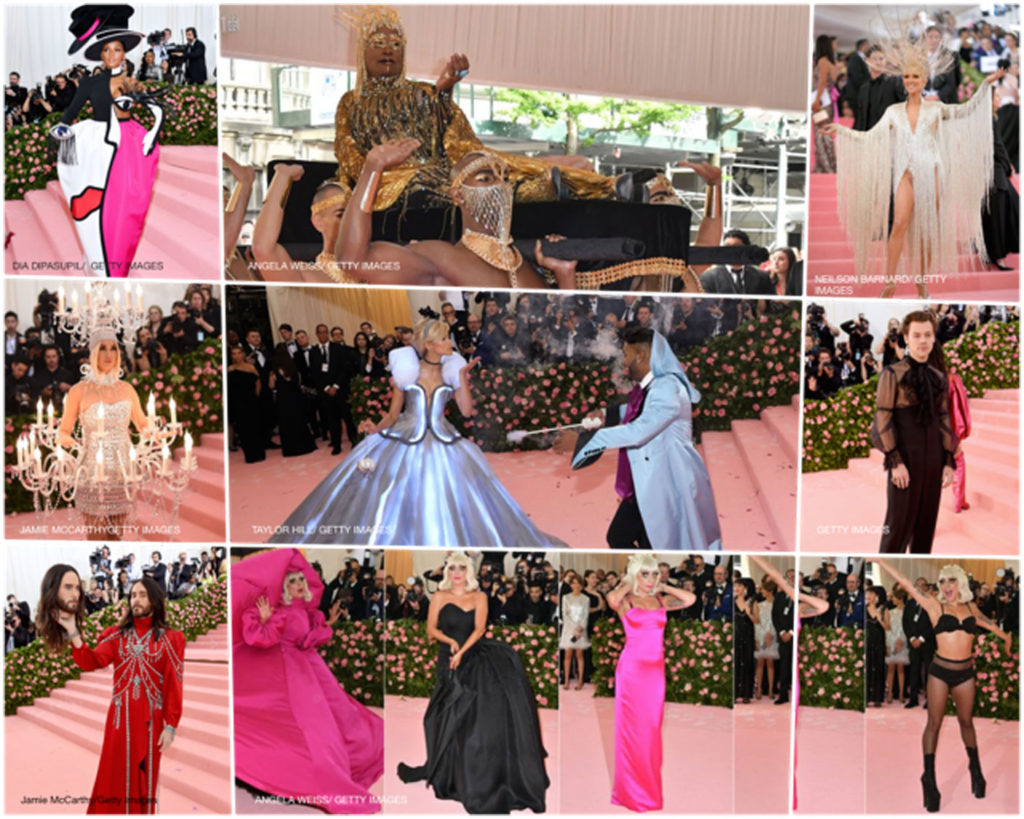 YOU have never seen the most outrageous and flamboyant outfits in your lifetime until you been to “the Met.”

And guaranteed, it’s always bigger, bolder and crazier than the last time!

Every year, the brightest stars of Hollywood gather (and by gather, I mean go crazy!) for a spectacular display of creativity, guts and out-of-this-world compliance to the event’s theme.

The themes have ranged from Heavenly Bodies: Fashion and the Catholic Imagination, to Manus x Machina, Punk: Chaos to Couture and China: Through the Looking Glass. This year’s exhibition theme is Camp: Notes On Fashion.

This gathering of theme-abiding guests is called the Met Gala. It is an annual fundraising event benefitting the Costume Institute of the Metropolitan Museum of Art. In accordance with the theme, “Camp: Notes on Fashion,” celebrities arrive in head-turning, over the top red carpet looks. This year’s gala was held on May 6th in New York City.

Known as the biggest event on the fashion fundraising calendar, The Met Gala was founded by publicist Eleanor Lambert and was first held in 1948 to encourage donations from New York’s high society. In its modern incarnation, the most famous faces from the realms of fashion, film, music and art come together to raise money for the Met’s Costume Institute and celebrate the grand opening of its latest exhibition.

The night is centered on the theme of the new exhibition. So, what celebrity would pass up the chance to give it their best shot at a legitimate high-profile costume party, even it means wearing a chandelier or posing with a severed head in your hand. True story.

Let’s lead on with that scene, shall we?

As previously mentioned, somebody went in and decided the best way to celebrate the theme is to walk around carrying “yourself.” That somebody is none other than Jared Leto who arrived with a mannequin of his own head, apparently inspired by Gucci’s Fall-Winter 2018 show, where the fashion house sent models down the runway with heads.

If that is not enough to “turn heads,” I don’t know what will.

On second thought, I do. And that is by wearing four looks in one! She’s done it again! And still never ceases to stop anyone dead in their tracks. Lady Gaga truly knows her way around the Met Gala. With a long history of exaggerated looks, the woman is unstoppable!

This year she showed up in a Russian nesting doll of a dress – revealing four outfits in one, each layered under the other, requiring a village (including designer Brandon Maxwell) to help her unveil each style. It started with a voluminous bright pink dress by Brandon Maxwell, she then stripped down to a black gown, pink slip dress and finally into a crystal bra and panties. Well played, Gaga. Well, played.

Some of the subtler looks were Harry Styles’ flamenco-inspired, gender-fluid look designed by Gucci, and Rapper Cardi B’s dramatic burgundy gown that extended into a full quilted circular train. The dress, trimmed with feathers, was designed by Thom Browne and said to have taken more than 2,000 hours to make.

Speaking of making a massive intricate dress, who can miss the 22-pound gold Oscar de la Renta dress that Celine Dion showed up in? I mean, hers took 53 master embroiders to build. That’s sheer work of art, right before your eyes!

And that’s not the only one that caught our eye – featuring Janelle Monáe in the most eye-catching Christian Siriano dress. The pun was very much intended, thank you very much.

Enormous angel wings or a spray-painted dress, Katy Perry always does the Met Gala theme like nobody’s business. This year was no surprise, but this is just epic! Perry was a human chandelier! In case that wasn’t clear enough, she actually went as a life-sized chandelier complete with electric candles and dripping with crystals, designed by Moschino’s Jeremy Scott.

As if that’s not theatrical enough, get this: a man was carried onto the red carpet by six shirtless men. Now, how is that for theatrics? That man is actor Billy Porter dresses in a gold bodysuit and matching headpiece that apparently can’t be shown in any other way but by being transported by six shirtless men.

Well, there’s old-fashioned-king-and-men-carrying-man sort of entrances and there’s a fairytale entrance by actress and singer, Zendaya, who wore a black Tommy Hilfiger gown, and walked up the stairs as her stylist, Law Roach, waved a wand and transformed her dress into a glowing version reminiscent of the iconic baby blue gown worn by Cinderella.

And there you have it. The Met Gala scene of 2019 unraveled in 800 words or less. It’s like being in an alternate universe where people have an elaborate and intense definition of “dress to impress.”

Either way, it was a great night and for a good cause. So, in my most theatrical tone and form, I am extending my congratulations for a successful event and immensely entertaining show.

***
Monet Lu is a Marikina-born, award-winning celebrity beauty stylist with his own chain of Monet Salon salons across Southern California and Las Vegas, Nevada. Ultimately, Monet is known as an all-around artiste who produces sold-out fashion and awards shows as well as unforgettable marketing campaigns. Monet is also the founder of the revolutionary all-natural beauty products such as Enlighten, your solution to discoloration. To contact Monet, please visit www.monetsalon.com or email him at monetsalon@aol.com.

Smiles and tears of motherhood

John Ablaza: From nature and culture to couture