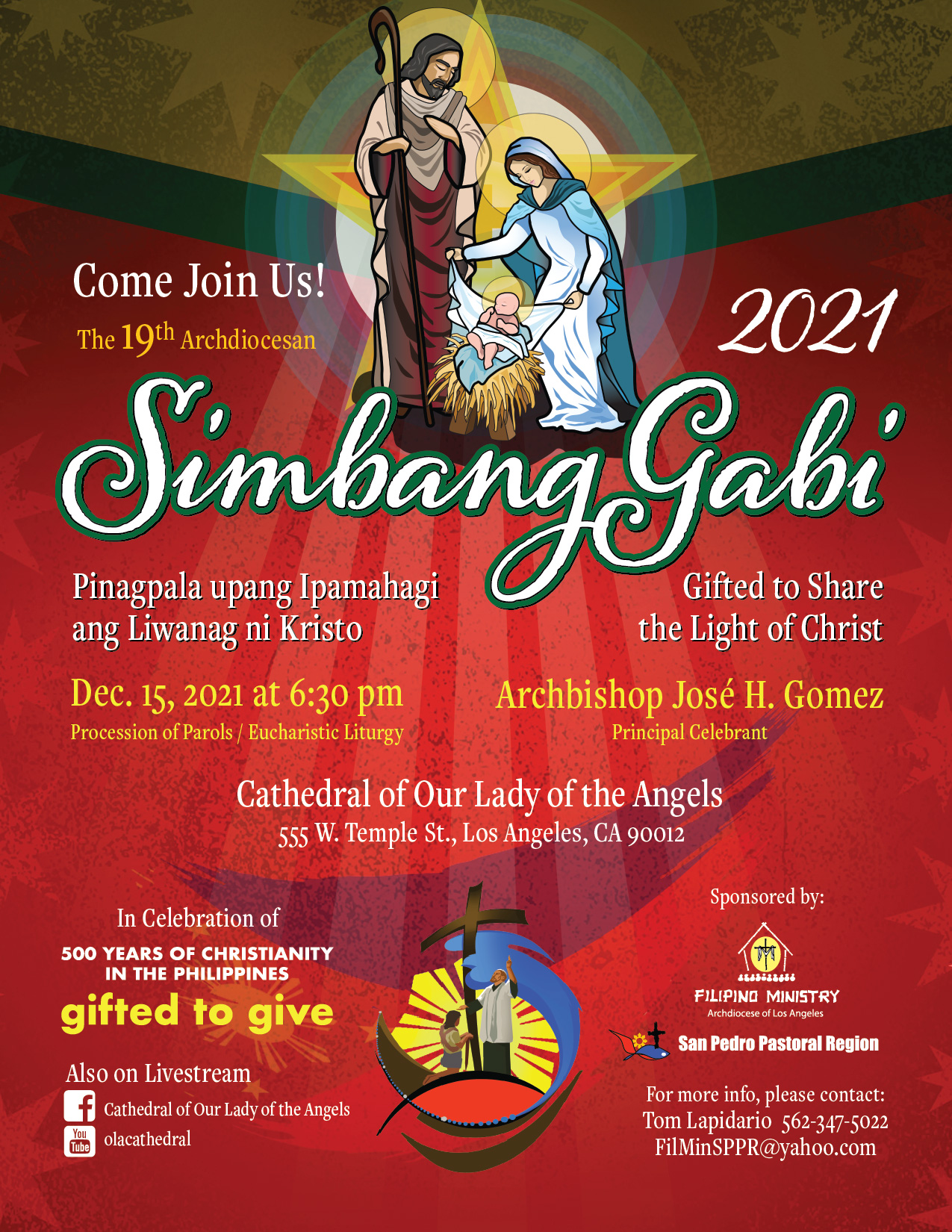 IN the Catholic Christendom, it’s that time of the year again to express the rich Filipino tradition of attending a nine-day novena of masses at dawn known as Simbang Gabi or Misa de Gallo (Spanish Mass of the Rooster) because Philippine masses are held at 4 a.m. from Dec. 15 to Dec. 23.

The tradition was introduced by the Spanish friars stationed in the Philippines to allow farmers to hear mass before going to the fields early in the morning. It is also the preparation for Christmas and commemorates the birth of Jesus Christ.

This depth of Catholicism among the Filipino people and filial devotion to Mary, the Mother of God had reached the U.S. and elsewhere where Filipinos overseas await the birth of her Son for nine consecutive days.

Sponsored by the Filipino Ministry of the Archdiocese of Los Angeles, Simbang Gabi 2021 begins on December 15 at 6:30 p.m. at the Cathedral of Our Lady of the Angels on Temple St. with His Excellency Archbishop Jose Gomez as presider. Other parish churches in the Archdiocese comprising 128 as of press time will participate in this Christmas tradition.

This year’s celebration will commemorate two landmark anniversaries among Catholics in Los Angeles. First, the 500th year anniversary of the gift of Christian faith to the Filipino people from Spanish missionaries who planted the Cross of Christ on Philippine soil during the celebration of the first Mass on Limasawa Island on March 31, 1521. “Gifted to Give” is the theme chosen by the Catholic Bishops Conference of the Philippines (CBCP). After 500 years, the evangelized Filipinos are recognized and called to evangelize others wherever they are.

Second, 2021 is the jubilee year celebrating 250 years of the Catholic faith in Los Angeles on the anniversary of the founding of Mission San Gabriel Archangel, the first church in what is now the Archdiocese. Simbang Gabi 2021 will be an occasion to respond to the Jubilee’s call to “raise up a new generation of missionary disciples.” “Gifted to Share the Light of Christ,” the theme of Simbang Gabi 2021, epitomizes the call to the mission of both jubilees.

The celebration is replete with a procession of parols, or Christmas lanterns, which makes the dawn masses a festive gathering of the faithful.

In Los Angeles and in several hundred other dioceses and parishes all over the United States, many pastors, most not even Filipino priests themselves, have fully embraced Simbang Gabi and have in fact made it a parish-wide celebration. Diocesan bishops support and encourage the devotion. They joyfully preside at either the opening or the closing mass and mingle with the parishioners during the receptions.

In this country, where Christmas has become a highly commercialized secular holiday, Simbang Gabi is a refreshing breath of fresh air which brings Jesus Christ back to the center of the Christmas season. Although Filipino Catholics are on the cusp of visibility in the American Catholic Church, this faithful community of Catholics has been grace-bearers to the Church in this country and elsewhere in the world.

[COLUMN] Termination during approved medical leave may be illegal