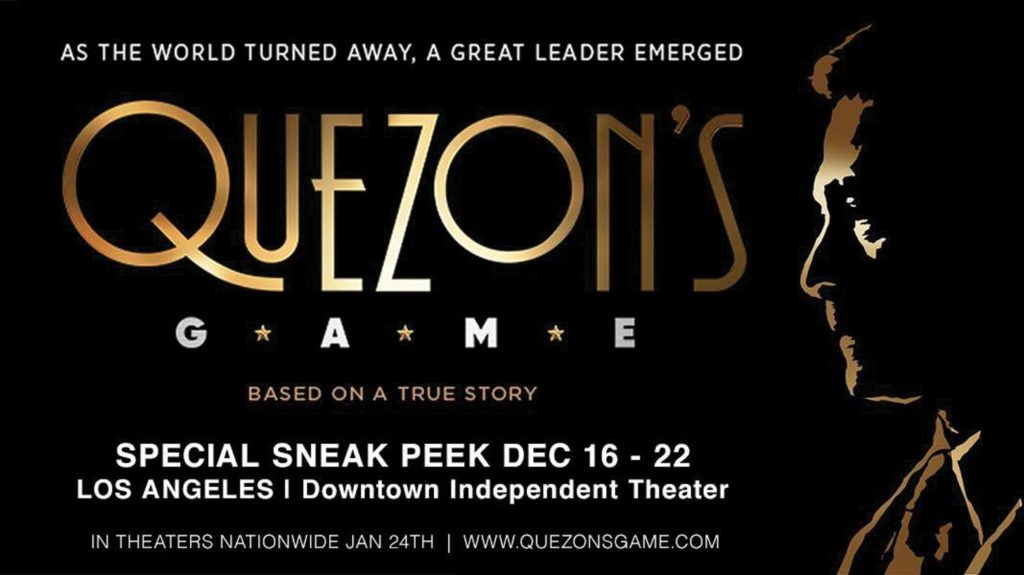 Critically acclaimed during its multi-award-winning festival run and successful May 2019 theatrical release in the Philippines, “Quezon’s Game” will have sneak peek screenings Dec. 16-22 in Los Angeles.

There will be three screenings every day from Monday, Dec. 16 to Sunday, Dec. 22 at the Downtown Independent, which can be found at https://quezonsgame.bpt.me/.

A true story of Holocaust heroism during World War II in the Philippines by Filipino President Manuel L. Quezon—who rescued as many persecuted Jews as Oskar Schindler at a time when most countries were turning their backs—the release of Quezon’s Game also marks the landmark 75th anniversary on Jan. 27 of the liberation of Auschwitz, the Nazi’s most-notorious concentration camp. Once forgotten to history, the incredible tale of what just one man can accomplish when defeat isn’t an option … a miraculous feat of human triumph.

A Star Cinema/ABS-CBN Film Productions , in association with  iWant  and  Kinetek,  “Quezon’s Game ” is the feature film directorial debut of Matthew Rosen  (also serving as cinematographer) who has directed television, music videos and more than 700 commercials over 25 years, winning more than 50 international awards. Rosen—a British national residing in the Philippines since 1986—and his Filipino wife, Lorena “Lori” Rosen, who co-produced the film, heard the little-known story of the film from members of the Jewish Association of the Philippines in 2009 and instantly realized they needed to retell this extraordinary and moving story on the big screen.

Comments the director, “I am a Jew who grew up in England and have experienced bigotry, but after 37 years in the Philippines, to this day, I have never come across prejudice, dislike or distrust because I am White or Jewish. I’m pinoy at heart and this was truly a passion project for me. The story behind Quezon’s Game remains a reflection of the Filipino people today, a warm and welcoming culture.

“In a time of war, when the rest of the world was in despair and apathetic,” Rosen continues, “the Filipino people—who were suffering their own hardships—shed a light on justice and morality to lead others. Quezon fought a lonely battle for what was right up until his untimely death. The message of this amazing story, which was largely forgotten, is more important than ever to in today’s growing climate of intolerance—and my wife, Lori, and I wanted to tell it. It’s my ‘thank you’ to the Philippines.”

As WWII loomed and the 1930s drew to a close, desperate Jewish refugees seeking to flee German/Austrian ghettos and the escalating atrocities of the Nazi regime found little help from countries around the world.

Willing to risk it all, it was a moral obligation the Filipino leader was determined to fulfill … despite astronomical obstacles, the Philippines struggling, U.S.-reliant economy and his own gravely failing health due to a relapse of tuberculosis.

Instrumental as well was an ambitious, young U.S. Army Colonel, future president Dwight D. Eisenhower (David Bianco), then chief aide to General Douglas MacArthur, serving in the Philippines, a U.S. territory at a time when Filipinos (even diplomats and officials), like African-Americans, were required to use “Colored” bathrooms at the White House.

Although Quezon’s intent to rescue 10,000 Jews was abruptly curtailed by the Dec. 8, 1941 invasion and three-year occupation of his country by the Japanese, he, his wife, Aurora (Rachel Alejandro), and daughter, Baby (Kate Alejandrino), succeeded against all odds to welcome more than 1,200 refugees, initially housing them on his own family’s property, Marikina estate. Yet in his final days in 1944, as president in U.S. exile, he regretfully turned to Aurora and asked, “Could I have done more?”

“Quezon’s Game” runs 126 minutes in English and Tagalog (with English subtitles). For theater locations when it opens in the U.S. on Jan. 24, visit https://www.quezonsgame.com/screening.