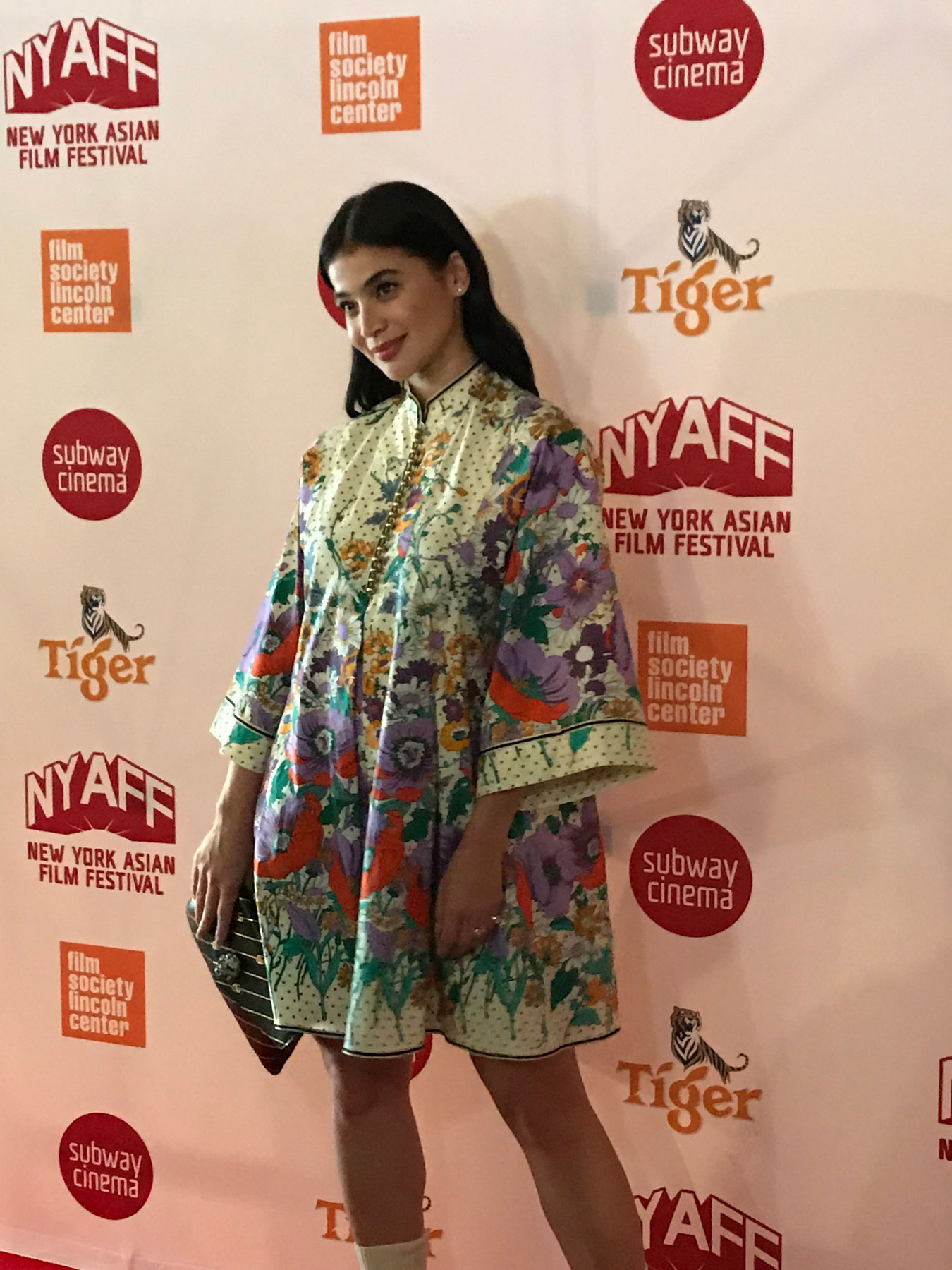 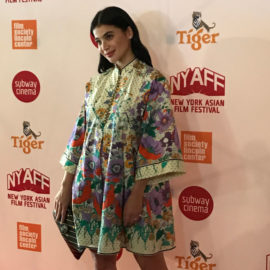 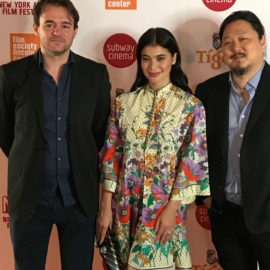 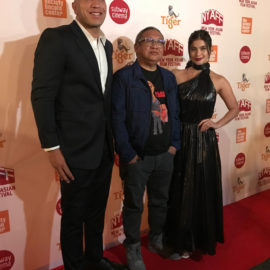 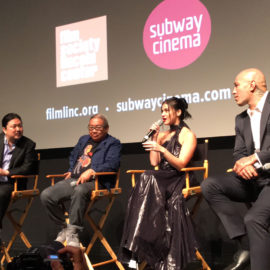 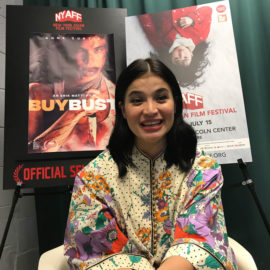 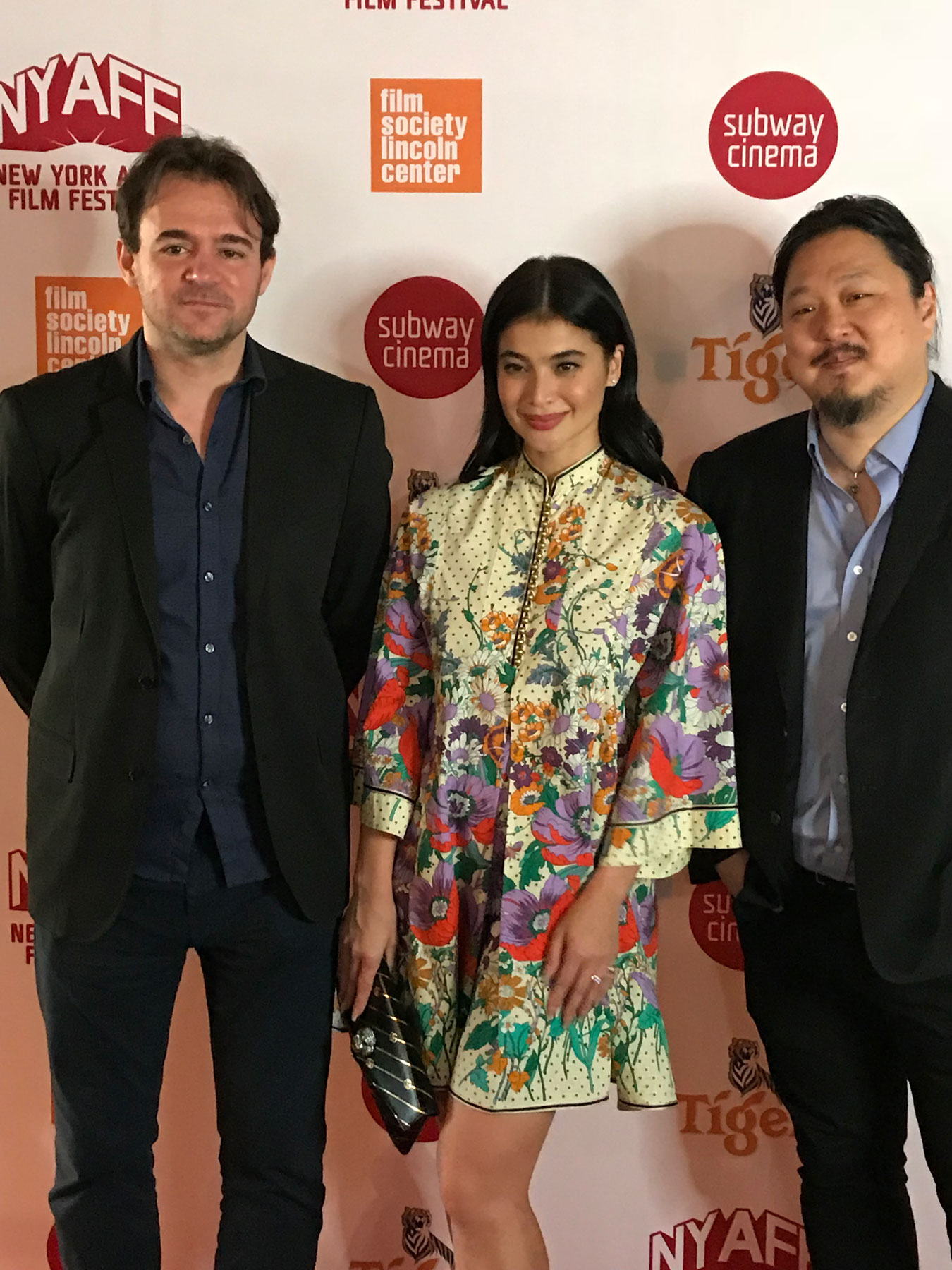 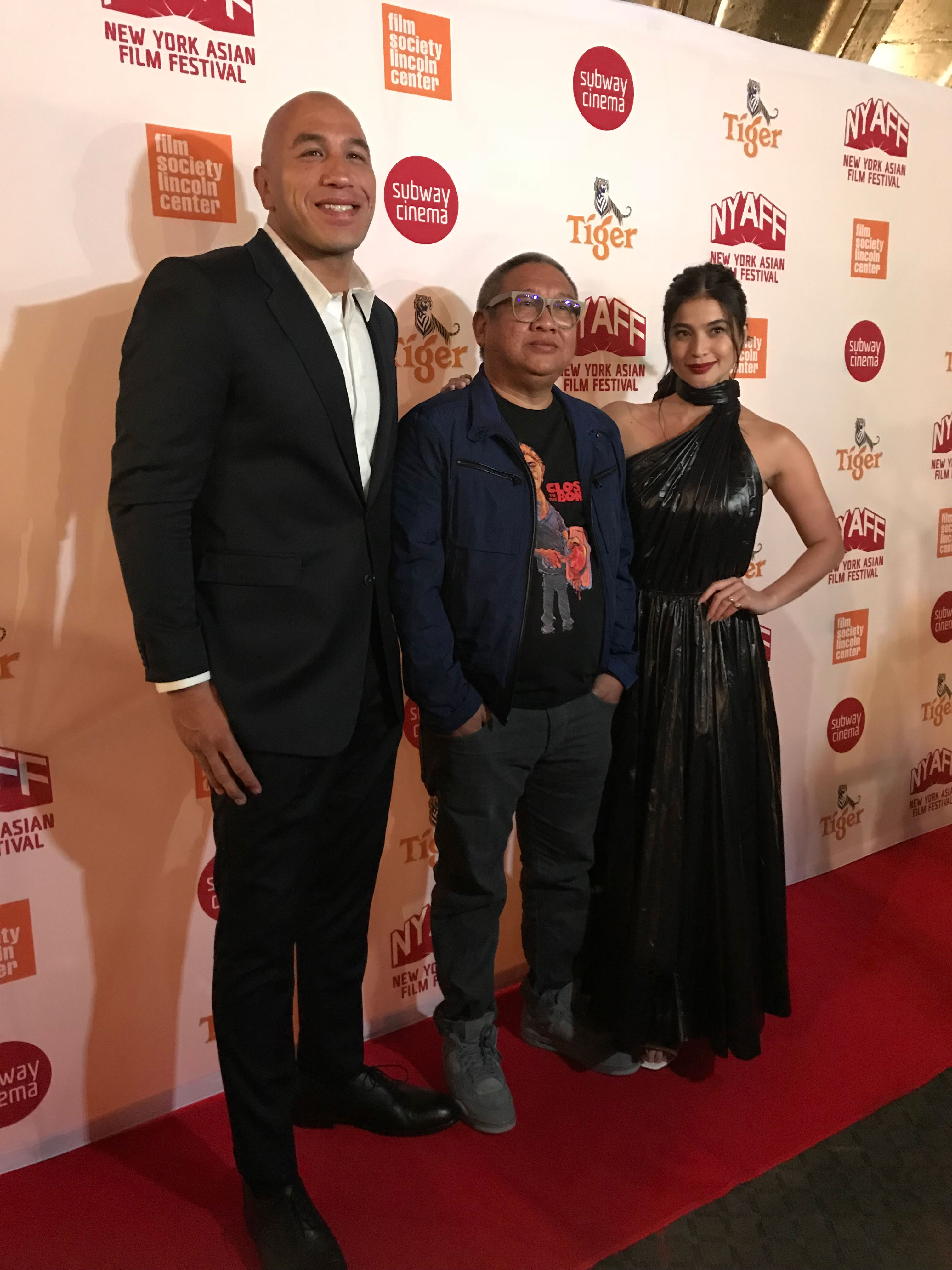 Brandon Vera, director Erik Matti and Anne Curtis on the red carpet at the world premiere of BuyBust in New York. The movie was the closing night film of the 2018 New York Asian Film Festival 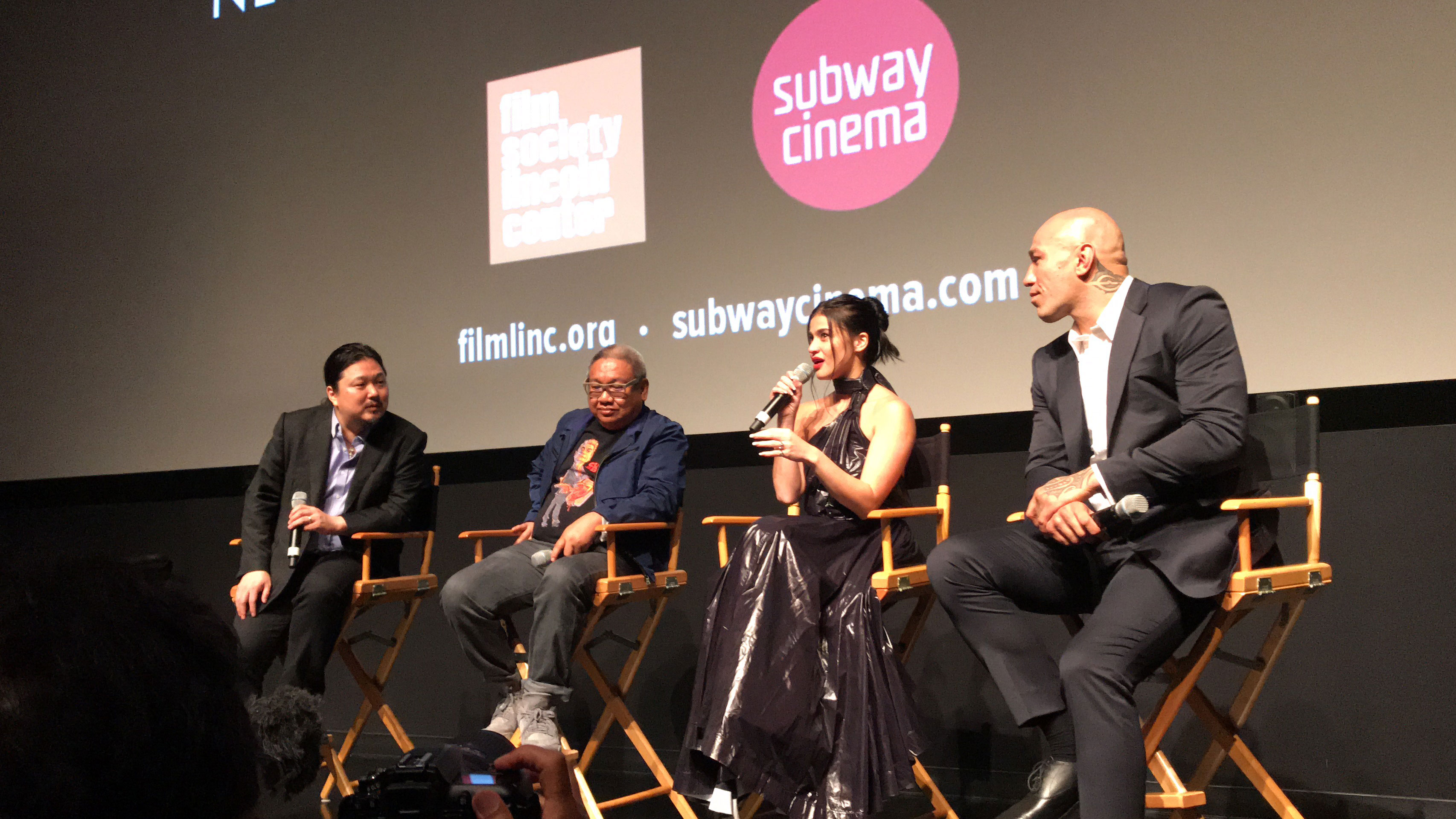 Q and A with BuyBust cast after the screening 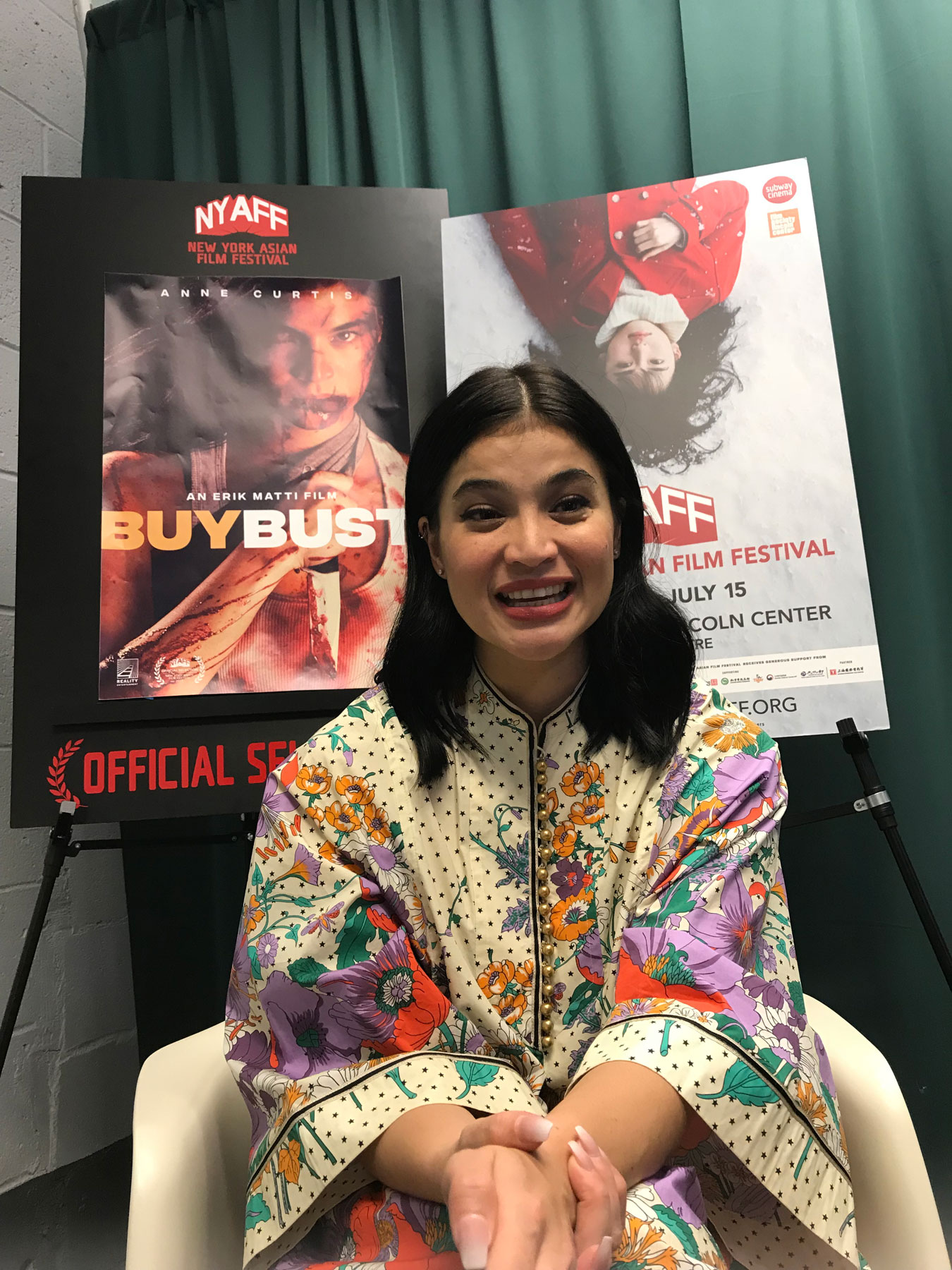 The film was sold out as of Saturday morning and by 6:00 pm on Sunday, a line has formed outside the SVA Theater in Chelsea for standby tickets. The crowd grew to almost a hundred moments before the 8:30 pm screening started.

In separate interviews with director Matti and the film’s lead star Anne Curtis, both shared how they felt screening the film before a New York audience, two full weeks before the film opens in the Philippines.

“I’m excited and nervous at the same time to hear what people have to say. This is my first ever world premiere,” Curtis said.

Matti expressed his trepidation as well. He and Curtis have a reason to be nervous.
It has been quite awhile since the Philippines saw an all out action flick. Gone are the days when action kings such as Fernando Poe, Jr., Ramon Revilla, Lito Lapid, Phillip Salvador, Robin Padilla, among others, made films that lorded it over the box office.

Which is why coming up with an action movie — with a female lead star, no less — during this time is a big and calculated risk for producers.

It is a big gamble, indeed, and it was tough to sell the idea.

“We eventually found a partner, Viva, which became our co producer, and in 2016, the new government happened,” Matti said. “It started out as another popcorn film, a buybust operation gone wrong. It is still a popcorn entertainment movie but we didn’t want to do a film that doesn’t put into consideration what’s happening in the country. ”

The idea for the film started when he was still doing his film “On The Job.” They were shooting then in a slum area in Caloocan when a drunk guy started to make a mess in the set.

“I thought then, if all hell breaks loose here, how do we get out? That’s where the germ came from,” Matti shared.

The idea became the major plot point of “BuyBust” and the story revolved around how a team of police operatives got caught in a war inside an enclosed slum neighborhood called Gracia ni Maria, where there is only one way in and one way out.

“BuyBust” shows Anne Curtis like you’ve never seen her before.

She did not do any films with her mother studio Viva Films for the past two years because she did not like the scripts that were falling into her lap. She felt that she has done numerous drama films where she played either the wife or the other woman, or romantic comedies or even fantaseryes on television.

Then one day, the prospect of an action movie was broached. Direk Erik pitched the project to her, over the phone, and right there and then she said yes.

“I really wanted to do an action film. It is something that I have never done before. I felt that it would really challenge me,” she shared. “Direk Erik explained what the film is about and the story and I was sold.”

Anne then went on to train for four hours a day for four to six months.

She did everything from proper gun handling to parkour and trained with Scout Rangers and Special Forces. For martial arts, she did PTK or Pekiti Tirsia Kali, a style specific to Filipino martial arts that focused on combat and it is the preferred combative training program by elite military and law enforcement units around the world.

There is a three‐minute scene in the film that took three days to make, five if we include the rehearsals. It took them 57 takes to come up with the scene that made the final cut.

On the actual shooting day itself, Anne was covered in blood, it was raining and they were on a slippery roof.

“I ended up vomiting out of tiredness. I was so tired, it was crazy,” she revealed. “It was hard to get that one shot. On the first day, I didn’t realize how hard it was going to be.”

When Anne said yes to the film, she knew what she was getting in to. More than the rigid training, she knew she had to give everything, including sleep.

“The whole film was hard to shoot. May rain effect, we were shooting after Showtime every day, I’d be on set at 5:00 am and once madilim na, we’d start shooting hanggang sa may araw na. Then, Showtime uli. That was the hardest part doing ‘BuyBust’ because it was a graveyard shift shoot,” she shared.

Thankfully, there were no major accidents while shooting. There were some minor mishaps though.

“I have mga peklat, ganyan,” she said, showing us some of the battle scars she acquired during the shoot and fondly calls them her memorabilia.

And did we mention that while shooting the film she was also amidst her preparations for her wedding?

The couple got engaged in 2016, after Anne did the New York Marathon.

She recalled that it became a running joke that she’d already be Mrs. Heussaff and they’d still be shooting “BuyBust.”

Which is exactly what happened.

But when she saw a rough cut, she cried. All the sacrifices she made were worth it.

“I felt like I couldn’t breathe while I was watching it,” she said. “I’m very happy, I think it’s about time. Kaya namin, no? It just takes that one director, one writer and one studio to invest on it.”

“We try to find every year the best films we could find. From the Philippines, year after year we find stronger films and the energy from these films is incredible,” said Stephen Jamier, executive director of New York Asian Film Festival.

Six films from the Philippines were shown at the NYAFF, including “BuyBust,” “Neomanila” directed by Mikhail Red, “On the Job” also directed by Matti, “Respeto” directed by Treb Monteras II, “Sid & Aya (Not a Love Story)” directed by Irene Villamor, and “We Will Not Die Tonight” by Richard Somes.

“It is one thing that these six films have in common is the craftsmanship, the story telling and all the elements you find in great cinema is there, particularly in genre cinema,”

Jamier added. “What we found is that action films from the Philippines are truly incredible and you see some cinematic feats in them.”

Typically when it comes to Asian film festivals, one would expect to close with a Korean or Japanese film.

“It is unusual to close with a Southeast Asian film in general but considering the quality of the film “BuyBust,” it deserves a prominent spot in the festival or any festival for that matter so it seemed natural for us to do that,” Jamier added.

Last Sunday was Anne Curtis Day at the NYAFF since aside from “BuyBust,” her other film “Sid & Aya (Not A Love Story)” was screened as well.

Giddy and excited about that news, Curtis told us, “I did not expect this to be happening so hindi ako nakakadama ng pagod. I am enjoying it and I am thrilled to be here. I am so happy for both my directors and everyone who is part of both films.”

Sid & Aya (Not a Love Story) is the highest grossing local film in the Philippines for 2018 so far. The film earned P132 million in its first two weeks of screening.

Up next for her is Aurora, an entry to this year’s Metro Manila Film Festival this December.
“It’s such an honor and I am very happy for the Filipino movie industry that we have more entries in festivals around the world. Nakaka proud,” she said.

Asked about what roles she wants to tackle next, the actress paused.

“I’d love to something like a psycho thriller, very ‘Girl, Interrupted’. I think that would be fun. I already did my ‘Reality Bites’ movie which is Sid & Aya and now, action sa ‘BuyBust,’” she said.

She is praying that Filipino fans watch “BuyBust” in droves when it opens in the Philippines on August 1 and across North America on August 10.

“I am hoping that the Filipino audiences realize that girls can also be badasses when it comes to action films,” she said. “I hope they enjoy the film and the ride with us. It is not a light ride, it will definitely leave you with a heavy feeling but I am just proud of the two years we spent in making this film and I think it showed.”

Would she say that this has been the hardest thing that she has done in her entire career so far?

Anne responded with an unequivocal yes.

Which we gently followed up with ‘More than singing?’ in reference to her other career as an aspiring singer and concert performer.

In the end, the “BuyBust” experience gave Anne Curtis a big lesson, one that she hopes she can use again in the future: “Go all out or go home!”B

Blood Ransom: Anne Curtis stars in her first US film