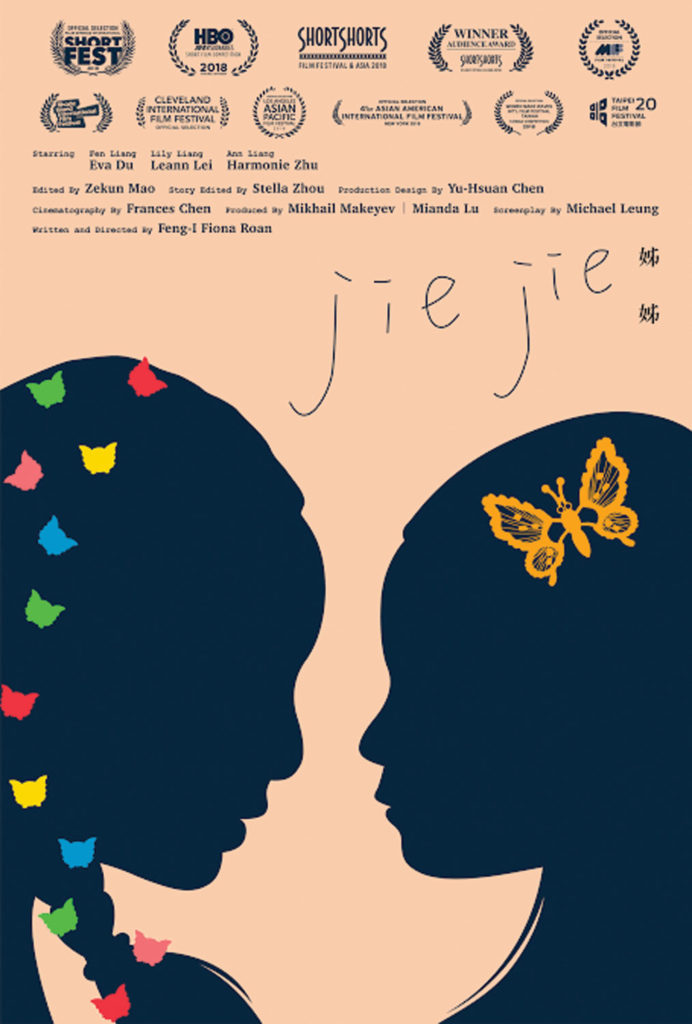 IN the autobiographical short film “Jiejie” (Chinese for “older sister”) by Taiwanese filmmaker Feng-I Fiona Roan, a 7-year-old girl named Fen (Eva Du) looks at a cover of an American magazine for teen girls, which features a girl wearing butterfly clips in her hair.

The year is 1997 when the United States is in the throes of one of the largest influxes of Asian immigration. Fen, her younger sister Ann (Harmonie He) and their mother Lily (Leann Lei) have just migrated to Los Angeles and are settling into their new lives in a country distant in geography and culture from their motherland.

Studying the magazine cover, Fen recreates the look with her own fashionable butterfly hair clips. Like many younger sisters, Ann copies everything Fen does, much to the elder sister’s chagrin. They fight over said butterfly clips in an argument that ends with Ann purposefully breaking one of the butterfly clips.

The film follows the family, showcasing the minutiae of a typical Sunday afternoon, but through these seemingly mundane situations – going to church, shopping for shampoo and sibling arguments and the parental scolding that follows – there is a deeper impetus.

Although the film is only 14 minutes long, it captures the nuances of an identity crisis familiar to many young immigrants: the internal conflict of Eastern customs vs. Western sensibilities, reconciling the feeling of cultural isolation and the desire to fit in, and how both those ideas fit in within the unique dynamic between sisters.

“Jiejie” was one of the finalists in the 2018 showcase of HBO Asian Pacific American (APA) Visionaries, a short film competition hosted by HBO that gives filmmakers of Asian and Pacific Islander descent a unique opportunity to exhibit their work and, more importantly, share stories of the APA experience that have yet to be told on screen.

“Monday” – which won first place at the 2017 HBO APA Visionaries showcase – follows a young Asian American hustler who makes ends meet by delivering drugs and other miscellaneous paraphernalia to different communities within LA. “Halwa” is a short drama that won first place in the 2019 HBO APA Visionaries that explores the desires and dreams deferred by an Indian housewife and mother.

In the last few years, major Hollywood studies have heeded that call for diverse representation by giving the spotlight to films and filmmakers from an array of backgrounds, and what was once a niche talking point among minority communities is now a mainstream effort to vary the output of talent and the narratives told on screen.

In regard to the Asian and Pacific American community, many point to the 2018 film “Crazy Rich Asians” as the mainstream breakthrough for Asian American cinema. Directed by seasoned filmmaker Jon M. Chu and based on the successful book series by Kevin Kwan, “Crazy Rich Asians” is on track to be the most financially successful romantic comedy of the decade.

Soon after, not only did the call for API representation in Hollywood amplify but so did the urge to showcase the diversity within the API community. Though the three films showcased by HBO last week all fall under the umbrella of API cinema, each film represented tonally different lived experiences from three vastly different cultural upbringings.

The success of “Crazy Rich Asians” paved the way for the successes of API films that came out this year, like Lulu Wang’s “The Farewell,” Nanatchka Kahn’s “Always Be My Maybe” and Diane Paragas’ “Yellow Rose,” signaling a seismic turn toward other API filmmakers. The emergence of these films, the personal and authentic nature of each of them, also pointed to the unearthed trove of API stories yet to be unpacked.

Hollywood’s shift toward API filmmakers and API stories shows no signs of slowing down, but, as each of the filmmakers at the HBO showcase emphasized, that shift needs to be in the hands of the API community to avoid painting the community with a broad brush, as it historically has been by non-API filmmakers.

“We can only do so much sitting in a corner at Starbucks to keep writing and writing and pushing out content, but we need collaboration,” Bhakta shared during a Q&A portion of last week’s showcase. “Even if we, specifically, aren’t your collaborators, [we need you to] help lift up our voices. We’re often sidelined, especially South and Southeast Asians right now. The diaspora voices are so often sidelined, even to the behemoth of Bollywood in Indian cinema.”

“I only speak when I have something to say, and I have so much more to say,” Bhakta added.

How to be a successful trader