THERE’s no denying that Asian Americans are having a moment in mainstream entertainment after years of being marginalized or stereotyped into narrow roles.

Last year, Asian Americans rejoiced at the August release of the romantic comedy “Crazy Rich Asians,” which was the first major Hollywood studio release since “The Joy Luck Club” in 1993. Featuring an all-Asian cast, the film proved to be a major breakthrough when it came to representation, receiving a 100% rating on Rotten Tomatoes soon after it hit theaters.

From each film, Asian Americans found a little bit of something to relate to — whether it was dealing with potential in-laws, nervously navigating young adult relationships, or simply dealing with cultural identity and conflict.

But in light of the burgeoning screen time both on the big screen and on television, Asian American storytellers see now as high time they make sure their presence in mainstream media goes beyond their ethnic demographic. 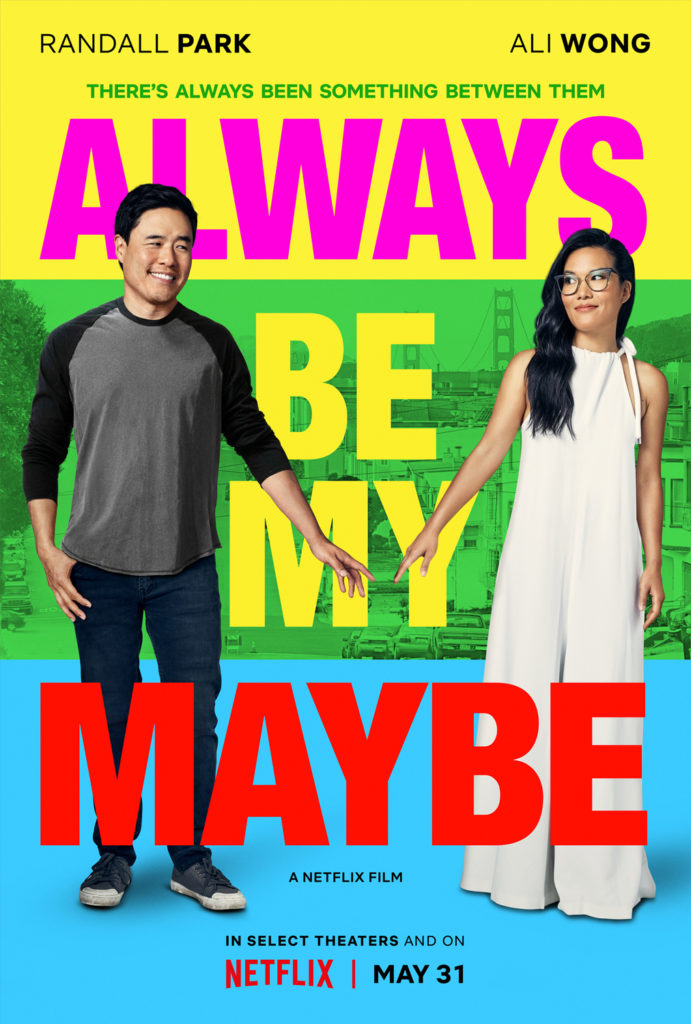 Netflix’s new original film “Always Be My Maybe” does well in proving that viewers can enjoy funny films featuring authentic Asian American experiences without relying on cheesy stereotypes to do so.

Starring the hilarious Ali Wong and Randall Park — both writers and producers of the film — “Always Be My Maybe” is a fun romantic comedy set in San Francisco to the throwback tunes of the late 1990s and early 2000s.

The film follows the lives of two childhood best friends Sasha (Wong) and Marcus (Park) from their years spent frolicking around the city and eating homemade comfort food, to their unexpected reunion 15 years later.

In true rom-com fashion, the two end up living out completely different lives during their time apart. Sasha becomes a successful celebrity chef walking red carpets and living her best life in Los Angeles. She’s engaged to a wealthy man played by Daniel Dae Kim, and is ambitious and fearless when it comes to making her mark in the world and moving to new places.

As for Marcus, not much has changed. He raps in the same band, lives with his dad, and choose to stay in the community where life has always been more comfortable and familiar. Playing his quirky girlfriend is the very funny Vivian Bang.

In further rom-com fashion, life has its way of bringing things together and it does so by placing the characters in often awkward but also often hysterical scenarios.

For the people behind the making of the film, making “Always Be My Maybe” was really just about telling an authentic and familiar love story.

Making her directorial debut was Iranian-American writer and producer Nahnatchka Khan, also the producer of ABC’s sitcom “Fresh Off the Boat.” Writing the story alongside Wong and Park was Filipino-Chinese writer Michael Golamco.

“I think that a lot of us these days, as we become adults, think about that one person way back in our past and if there is a possibility there,” Golamco told the Asian Journal. “I think for a lot of us, you want to make sure that you’ve really given those things a chance and when opportunities pop up again, you have to ask yourself if maybe this was it.”

He added, “It’s like, people kind of getting over themselves and their own egos and being vulnerable — opening themselves up and it’s a hard thing to do. But you can’t let that hold you back, because when you’ve got a chance at real happiness, you’ve got to take it.”

Golamco — Manila-born, but moved to Canada and then to the San Francisco Bay Area at the age of 10 — is not new to telling Asian American stories.

A playwright, Golamco has written a number of stage plays featuring Asian leads and Asian-centric story plots. In fact, Golamco and Park met each other while studying at the University of California, Los Angeles when Park started an Asian American Theater Company and Golamco was a charter member.

Wong and Park called Golamco up when they decided to go ahead and write the film.

Golamco said that during the writing process, there really wasn’t any conscious intention or strategy in their minds for making sure that the film would be perceived in any certain way in terms of property representing Asian Americans.

To them, they were just writing from what they knew from their own personal experiences.

“It came about organically because these are our lives,” said Golamco.

In one scene, for example, visitors to a birthday party are seen taking off their shoes before coming into the house, carrying them through the house, then putting them back once they get to the backyard.

Golamco mirrored that with a recent visit he made to Park’s house when he naturally chose to wear shoes easy to take off, knowing that they’d be coming off once at Park’s home.

“It’s natural to us because that’s how we live, and so when you tell a story about these people, it just comes out organically,” said Golamco.

For Golamco, the key to good storytelling — regardless of primary intention — is about making sure to convey an emotional journey.

“The audience needs to be able to access the story, and not just the plot of the story, but the actual emotion so that they’re there with the protagonist. You put them in the protagonist’s point of view and they live that life for a bit,” said Golamco.

He said the ability to convey a protagonist’s perspective is especially important for Asian Americans because there isn’t enough representation.

“These days [representation] is growing which is great, but that representation is important because it puts non-Asians into the point of view of an Asian American protagonist. It allows access to that protagonist’s emotions and everything that they’re going through,” said Golamco, adding that he hopes that people will ultimately be able to share in each other’s heartaches and triumphs and grow together.

Michelle Buteau, who played Sasha’s best friend and assistant Veronica, said that for a long time, films got away with having one ethnic person, which often resulted in stereotypical jokes.

“I think there’s no time better than now to be like, ‘Hey, guess what? We’re people, we’re out here, and we’re just having conversations and going through [things] like everybody else,’” said Buteau.

Being a child of Caribbean parents, Buteau shares in the hopes that movies will just be known as good movies and not be hyper-focused on an ethnic demographic.

“It’ll be so great to finally have one day where it’s not a Black movie, but just a movie. It’s not an Asian cast, it’s a joke cast,” said Buteau, who is also soon to be seen in the remake of the “First Wives Club.”

The book follows the character growth of a young Fil-Am boy named Virgil Salinas who is shy and gets bullied at school, and eventually finds himself stuck in a well where he learns how to speak out for himself and dealing with people in the process.

“That’s what I love about this book, that these begin in the story isolated, but the universe brings them together,” said Golamco.

“Going back to what I said earlier, it’s that thing — putting the audience into the point of a view of a kid that normally is not the hero,” he added, referring to the character of Salinas.

As for “Always Be My Maybe,” Golamco said that it’s a must watch because it presents an incredibly familiar community — one we all live in.

“It’s kind of great to see yourself reflected on the screen because it lets you know that your life has merit — that somebody saw that and decided that these characters belong on the movie screen deserve the full Hollywood treatment to tell their story. You need to see yourself reflected in the culture. All of us do. Every single person in this country. Their stories are waiting to be told and this is one of them,” said Golamco.

“And it’s really funny,” he added, encouraging people to watch it with their family, make a party out of it, or use it as a “subtle hint to your crush.”

“Always Be My Maybe” was made available on Netflix on Friday, May 31, with limited released in select theaters.