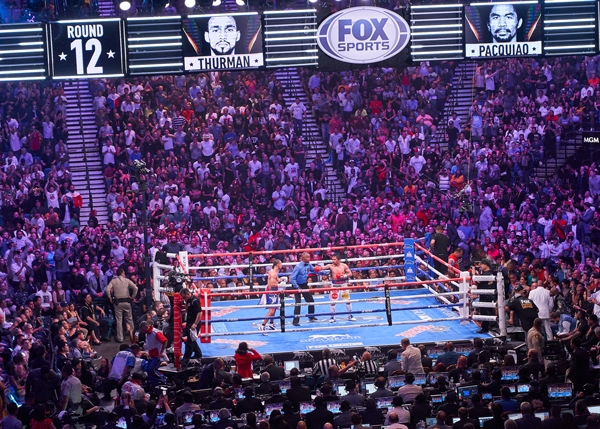 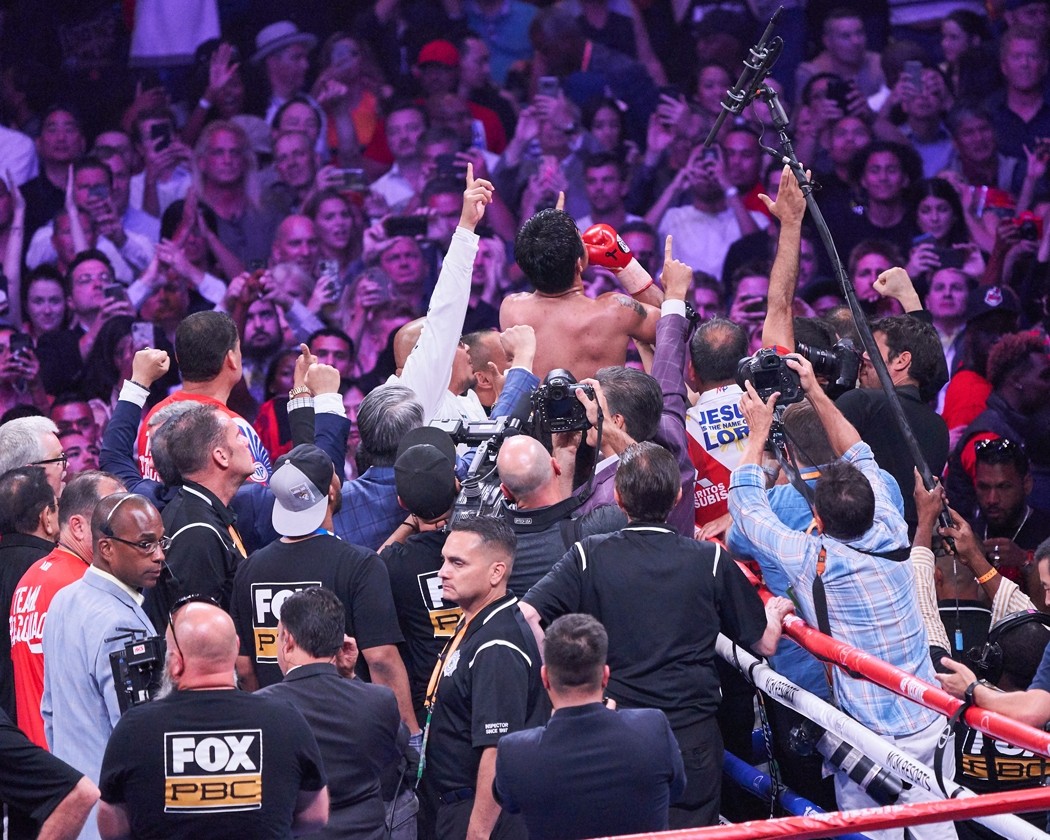 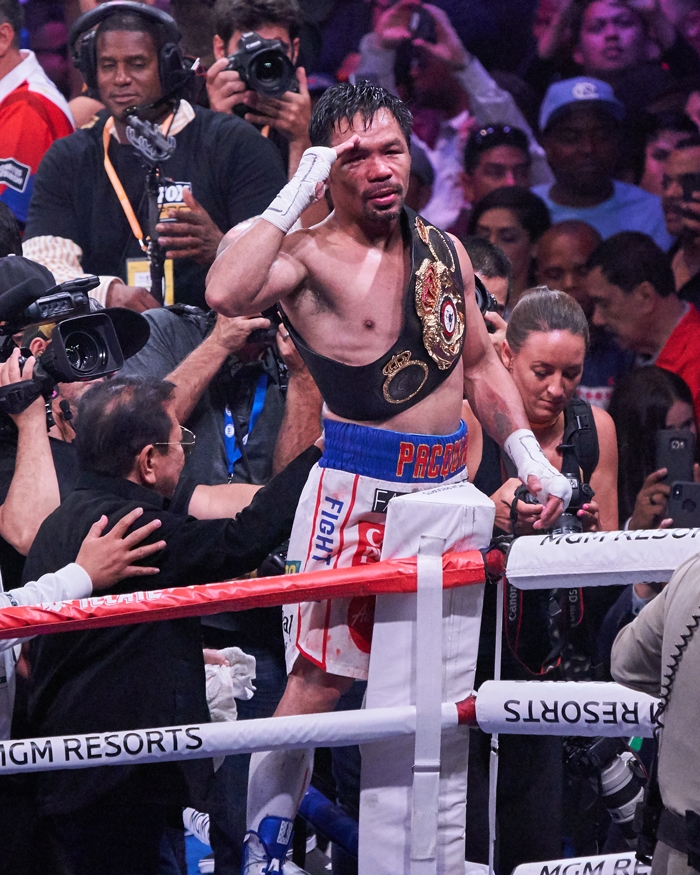 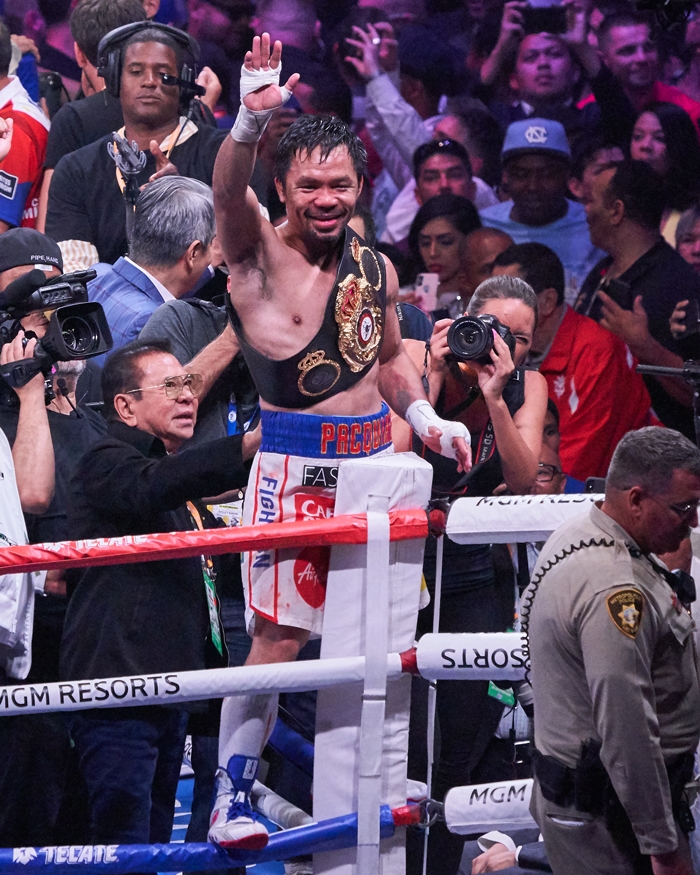 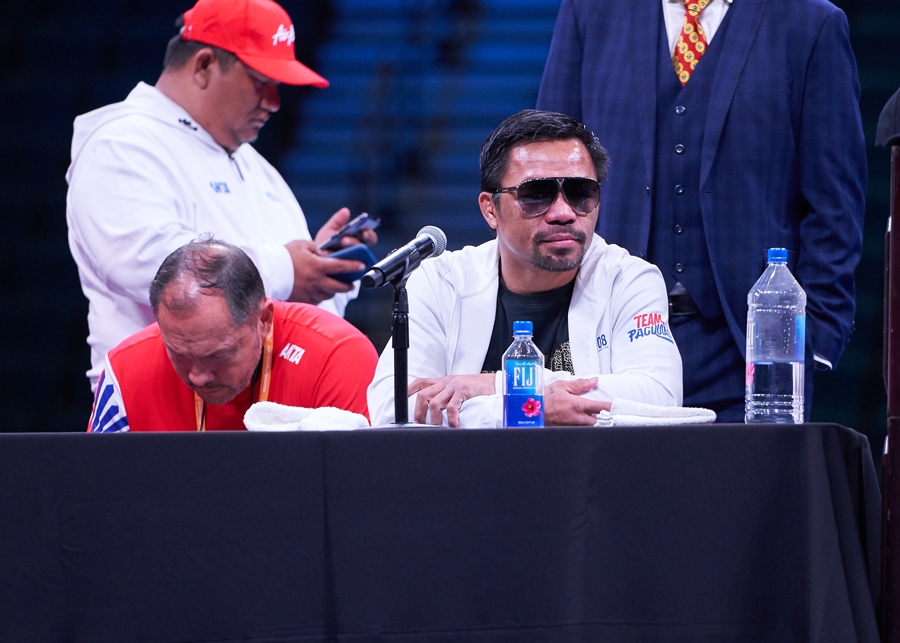 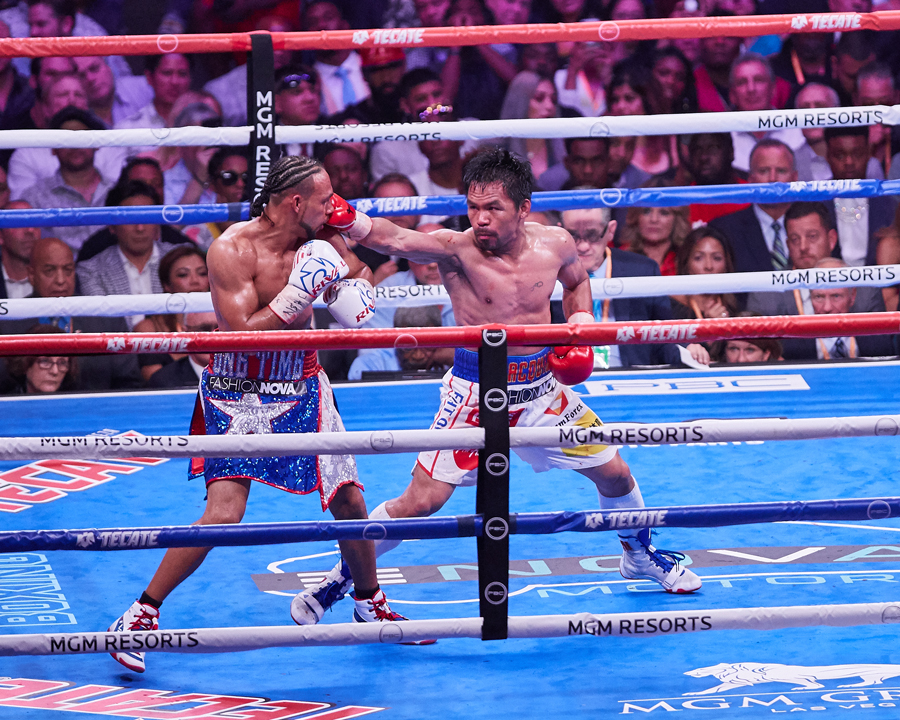 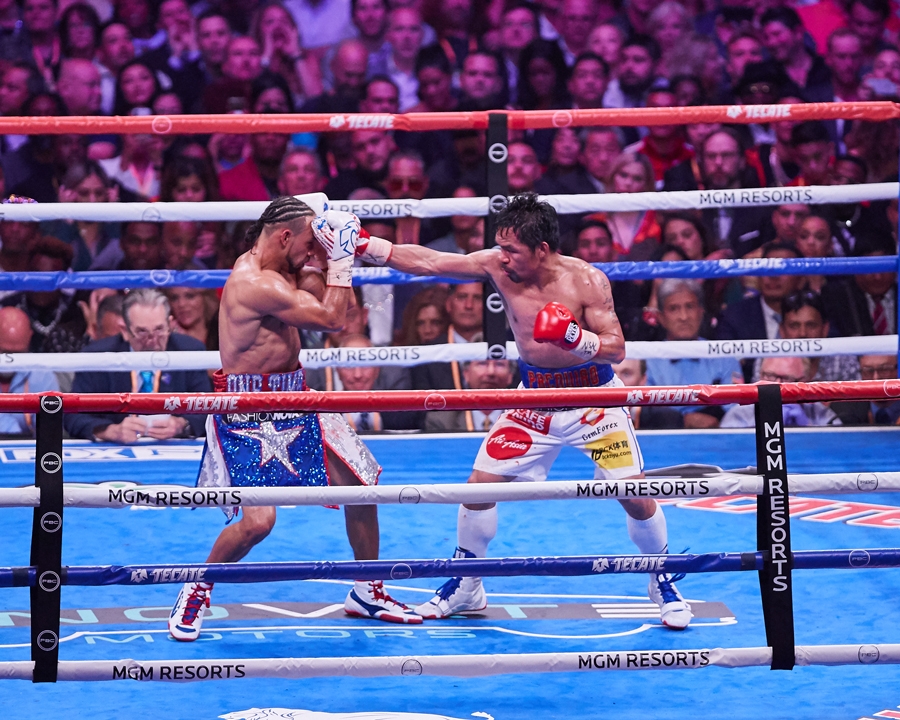 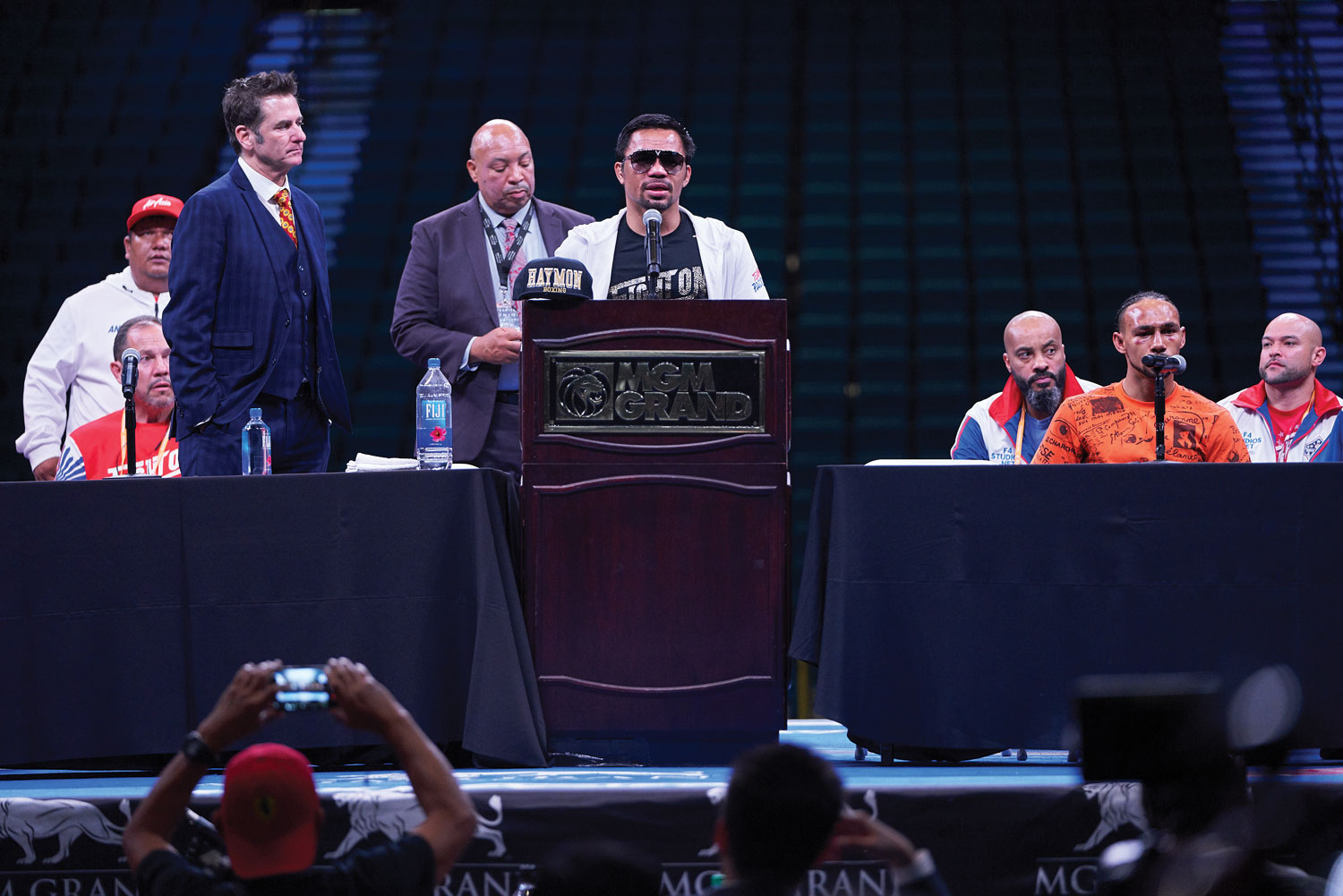 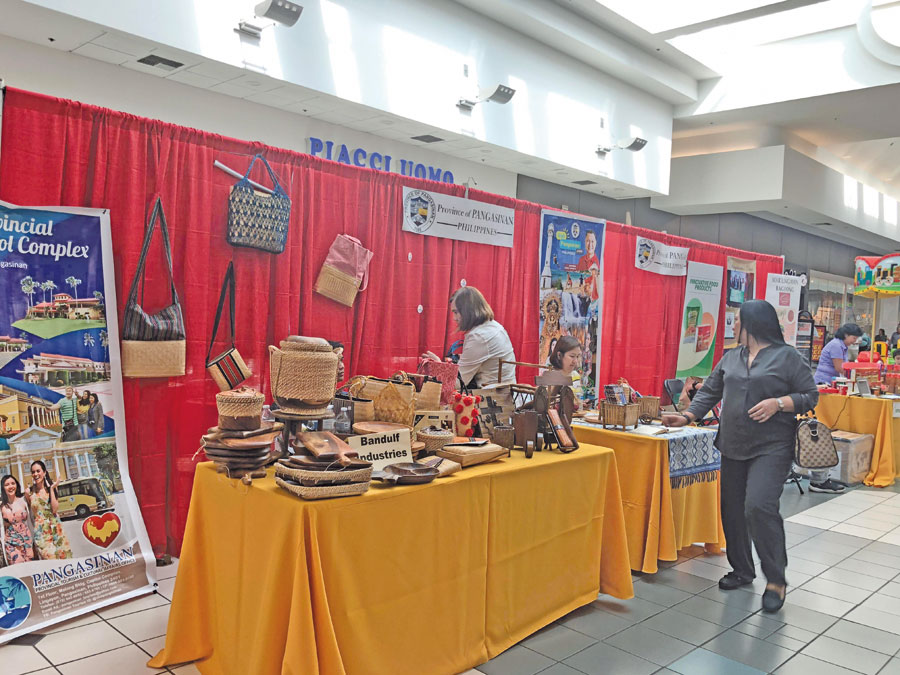 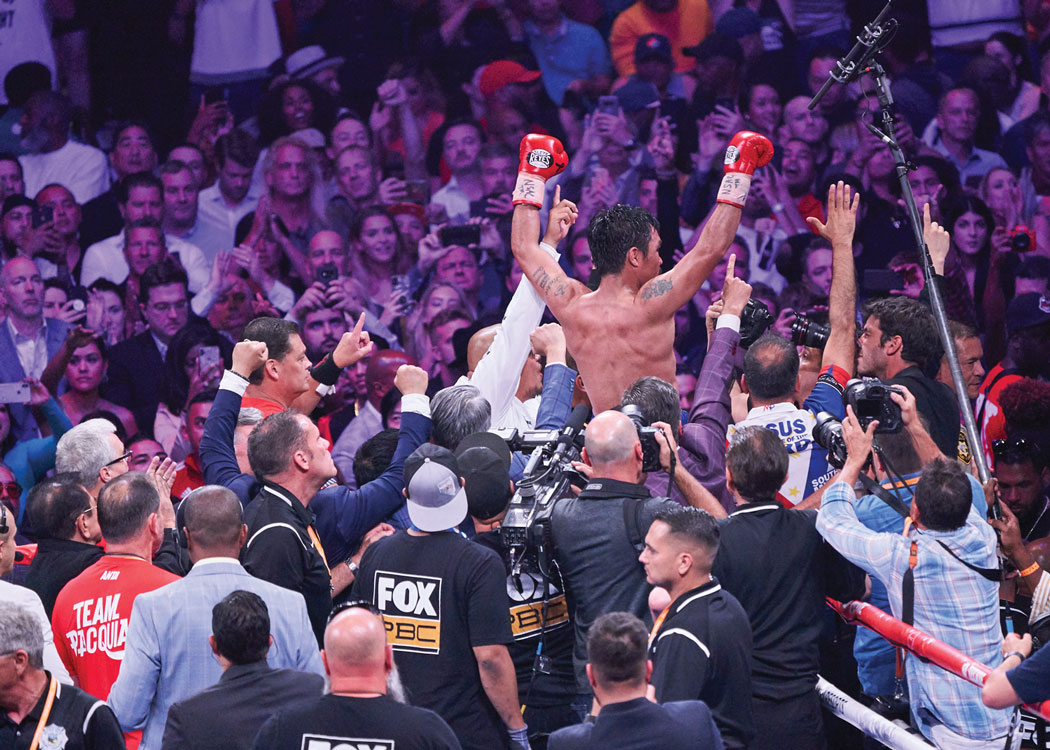 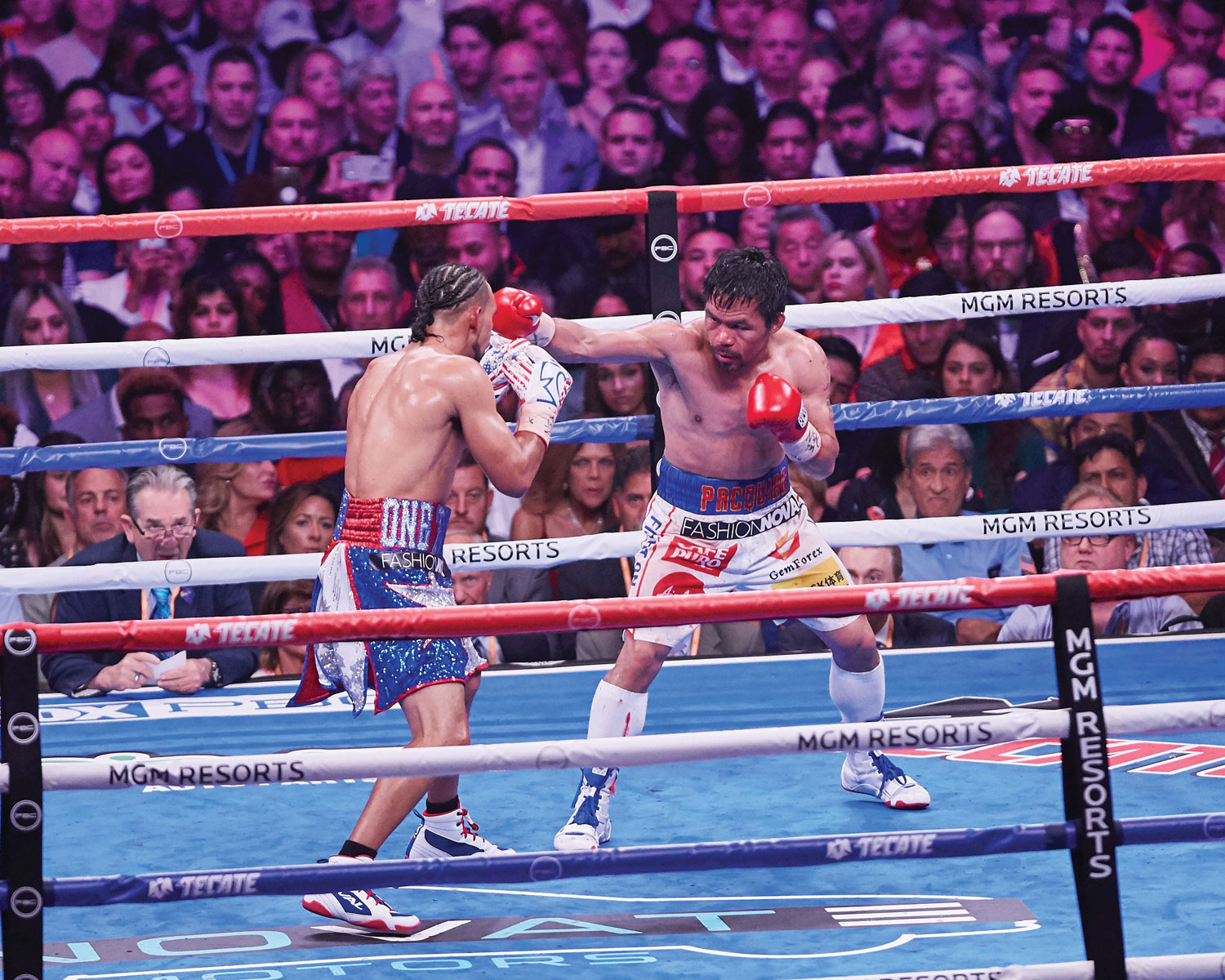 Manny “Pacman” Pacquiao lands a punch during his bout against Keith “One Time” Thurman on Saturday, July 20 at the MGM Grand Garden Arena in Las Vegas. The 40-year-old Filipino boxer won the WBA Super Welterweight title from the previously unbeaten Thurman. | AJPress photo by Noel Ty 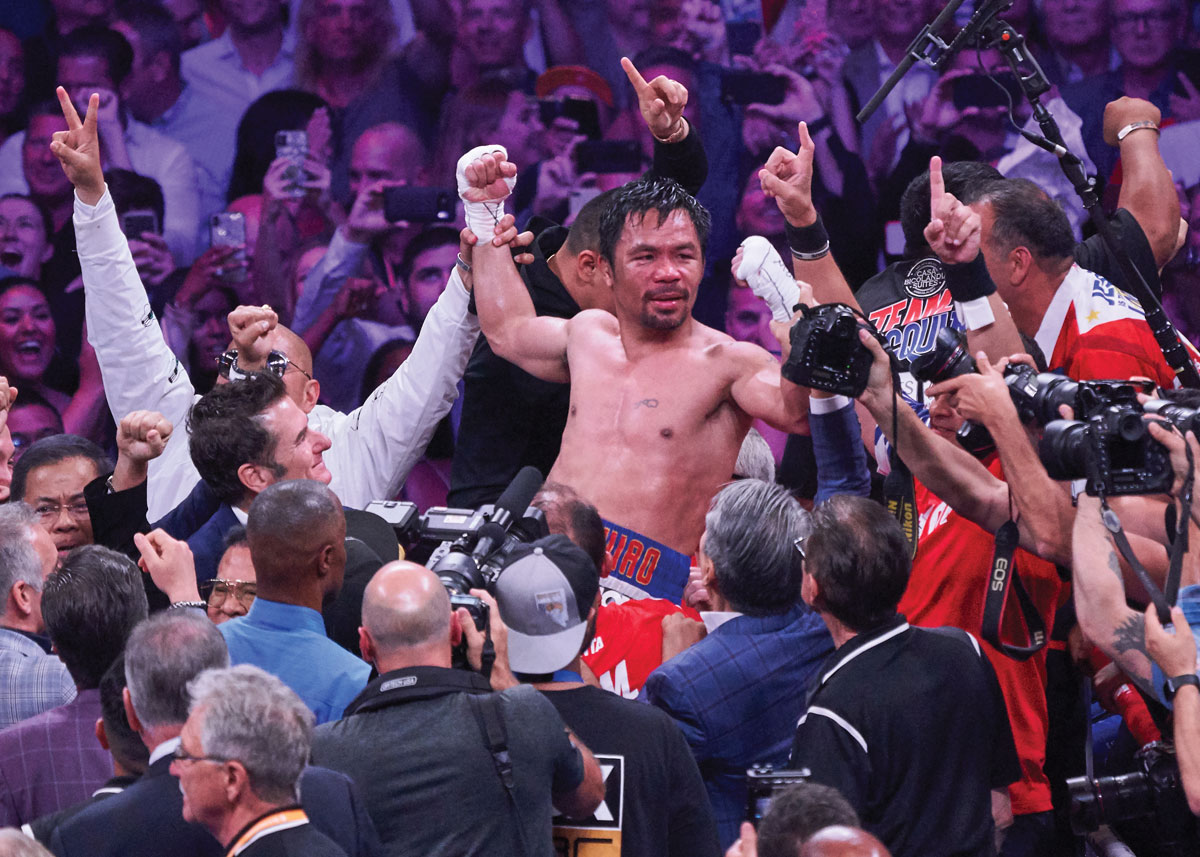 At 40, Saturday’s bout marked Pacquiao’s 62nd win of his 71-fight professional career, making history as the oldest welterweight champion and the fifth-oldest boxer to win a world title in any division. | AJPress photo by Noel Ty

Pacquiao, 40, faced the media after winning against 30-year-old American boxer Keith Thurman (29-1, 22 KOs) in a 12-round battle for the WBA Super Welterweight title.

Roach noted that the blurry vision could be an allergic reaction to the Vaseline that was used on the boxer’s face during the fight, around the eyes in particular.

“Last night was just weird a little bit. He was having problems seeing at the press conference and I think that he said he has or he might be allergic to Vaseline or something,” said Roach to Filipino reporters.

He assured that they will “find out what’s causing that problem and go from there.”

“Manny, he fought a great fight last night. He took a little too many hits, and maybe a little bit too much punishment,” Roach added.

Despite Pacquiao taking 192 power punches from Thurman compared to the 113 that he landed on his opponent, the Filipino boxer still won by split decision for dealing much more damage. The judges scored the fight 115-112 (twice) and 113-114.

Pacquiao knocked out Thurman in the first round and landed a left hook on Thurman’s body in the 10th round that stopped the American boxer’s momentum.

“He’s very tough. He’s very young. I can say he’s heavy-handed, man. Not like my other opponents,” Pacquiao said, referring to Thurman.

Pacquiao also said he is planning to sit out for the rest of the year out after his latest fight. He previously fought Adrien Broner in January for the WBA welterweight championship, but said his fight with Thurman was the best one this year, which may even give him the honor as ‘Fighter of the Year.’

The boxer turned senator plans to return to the boxing ring next year. He’ll be 41 years old then.

Due to his eyes, the boxer, who arrived back in Manila on Tuesday morning, was not able to attend Philippine President Rodrigo Duterte’s fourth State of the Nation Address (SONA) on Monday, July 22, choosing to rest instead upon his doctor’s advice.

Saturday’s bout marked the Filipino boxer turned senator’s 62nd win out of 71 matches as a professional fighter, making history as the oldest welterweight champion and the fifth-oldest boxer to win a world title in any division.

“The abilities and skills I have are given by God. I believe that ability, skill and responsibility has a purpose and that purpose is to inspire the Filipino people to rise above their limitations and overcome their circumstances,” Pacquiao said. “There are many who say that there won’t be another Manny Pacquiao. But I believe that we have many boxers who are just waiting for an opportunity, waiting for our help. It is high time for us to invest in our boxing talents who are loaded with potentials. The so-called diamond in the rough can just be around the corner.”