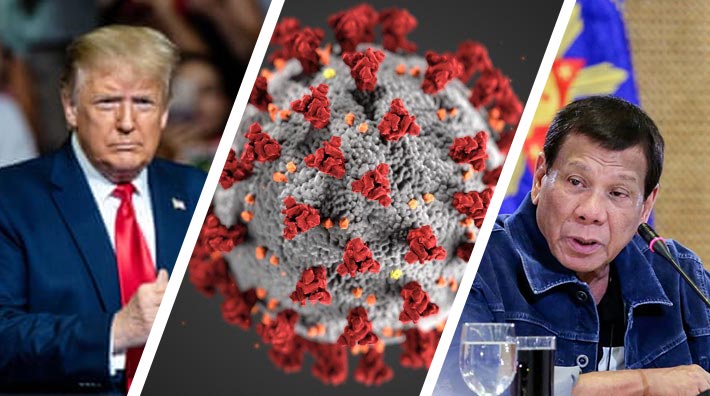 FILIPINOS all over the world can’t help but compare and contrast U.S. President Donald Trump and Philippine President Rodrigo Duterte. For many of us Filipinos in America, their similarities in terms of their leadership style, the image they want to project, the rhetoric, their relationship with the international community, the laws championed, facts and the truth have left us feeling exasperated especially during the age of the coronavirus pandemic. After all, we call both countries our home — our Motherland and our adoptive country, the United States of America.

BUT let us be more specific in our comparison in the context of the 5th State of the Nation Address or “Ulat ng Bayan.” Just like the “State of the Union Address” (SOTU) here in America, citizens look to the speech from the president as his statement of accountability to the people and the nation.

We expect our leaders to give us the truth of where we are as a nation, where we are going, and how to get there, especially in the context of the promises delivered when they were just running for office, courting the nation to accord them the public trust to run the government as its Chief Executive and Commander in Chief.

Let’s go straight to the point on the issue of the coronavirus pandemic. One thing that Trump can learn from Duterte amid the threat of COVID-19 is to prioritize the life, safety and well-being of the people more than political and personal selfish interests.

“I must admit that our actions have been far from perfect — totoo iyan, I admit it…To open up the economy to pre-COVID-19 levels at this time is not an option because whatever good it can produce will only be gobbled up or be outweighed by the bad it will generate,” Duterte said in his SONA. “Buhay muna bago lahat” [Life first, above all others].”

Duterte laid it out that the global war against COVID-19 will take longer than expected. The Philippine president also took responsibility for the failure of his administration to mitigate the spread of the virus early in the battle.

This is something we never heard from the President of the United States. Donald Trump has never taken responsibility for his administration’s failure to act proactively despite facts, information and warning from his own intelligence agencies and the World Health Organization, but instead shifted the blame to everyone else but himself, even up to now.

As the coronavirus pandemic has infected more than 4.4 million Americans, killing over 151 thousand people, and continues on an uptick, Trump continues to push states to re-open the economy and students to go back to school.

Worse, the Trump administration threatens to withhold additional funding for schools that refuse to re-open and cut unemployment benefits for those who refuse to go back to work amid the threat to their life because of the pandemic.

We know that moving closer to the November elections, the intention of Trump is to create an impression that we are back to normal, that the economy is booming, the number of jobless Americans is down, that the stock market indices are going up — all of these in the service of his bid to be re-elected no matter what the cost, even if it means the lives of the American people he has sworn to protect and defend.

Trump continues to deny scientific facts, disregard advice from and even denigrate health officials and scientists, defy safety measures such as social distancing, wearing mask, push people to go back to work and children to go back to school just because of his tunnel vision that sees only one thing: to be re-elected.

And because his focus is off tangent to the safety and wellbeing of the people, Trump has failed up to now, to manufacture and distribute more PPEs (personal protective equipment) most needed especially by our frontlines in the hospitals. ICU beds in many hotspots have been filled above capacity.

Testing is still not as wide scale, not as available as it should be, yet he continues to lie to the American people that we do the most testing, better than Europe, without breaking down to the number of tests per capita – number of tests done per million of America, not in general absolute terms.

What a shame! The United States of America — the richest and the most powerful nation in the world — seems to be so powerless in arming the nation with the battle gear we need to defeat the virus. Why? Because our president’s focus is on defeating his political enemies more than COVID-19!

And so, I think Duterte’s admission of culpability is a step to the right direction, which hopefully will help re-calibrate his approach in the fight against the pandemic.

As Duterte delivered his SONA, the virus has infected an additional 1,657 people, which according to the Department of Health, has brought the case count to 82,040, killing 1,945. While some 26,446 patients recovered, the number of those whose lives will be taken because of the pandemic will continue to grow.

My mother, siblings, in-laws and the rest of our families still live in the Philippines and they just share how stricter the safety measures have been there compared to what we have here in the United States.

As economically disadvantaged as the Philippines may be compared to the United States, Duterte did not yield to pressure from the business community to open immediately, unlike Trump.

Though the draconian measure has been unpopular, the enhanced quarantine rules were implemented with the goal of slowing down the spread of the virus by making people stay at home as much as possible. Per household, only a few are given a “pass” to go out to buy groceries, medicine, and other essential tasks. And there is a schedule in a week when they can come out to do essential errands. Bawal ang pasaway.

In contrast, Trump is even the one urging people to disobey safety measures implemented by local government officials, mocking those who follow, labeling conformity as a sign of weakness.

Duterte and the local government likewise focus on how to help the Filipino families survive this medical crisis, regularly giving away bags of groceries with rice, sardines, etc. while acknowledging in the SONA that there were issues with the distribution of cash aid to the poorest Filipinos.

In the SONA, Duterte requested for rent and loan payment deferrals from property owners and banks; additional funding for micro, small, and medium enterprises; and skills training programs for thousands of overseas Filipino workers who returned home.

In contrast, the Trump administration even petitioned the U.S. Supreme Court to kill the Affordable Care Act — aka Obamacare — without offering an alternative after all these years. This move will scrap health care coverage for so many Americans during the pandemic.

Lately, Trump’s minions in the Republican Senate are moving to cut the expiring $600 weekly federal unemployment bonus to $200 a week. This $200 flat benefit would last for about two months as states make the transition to a system that would grant unemployed people 70% of the wages they made before they lost their jobs, NBC News reported.

This, and the bonus all help stimulate the economy during these trying times.

Much is yet to be discussed when it comes to the Trump and Duterte administrations’ response to the need for more testing, contact tracing, and a bigger plan to prioritize health care in both countries, based on science and facts. I will leave the discussion in future articles.

For now, continue to speak up and speak out and tell your representatives in Congress about what really matters to you. America should continue to be the government of the people, by the people, for the people, but we all need to do our part to protect our health, safety, well-being, especially when this is not the primary goal of the current president of the United States of America.

Bankruptcy: Get out of debt, get your finances back in order