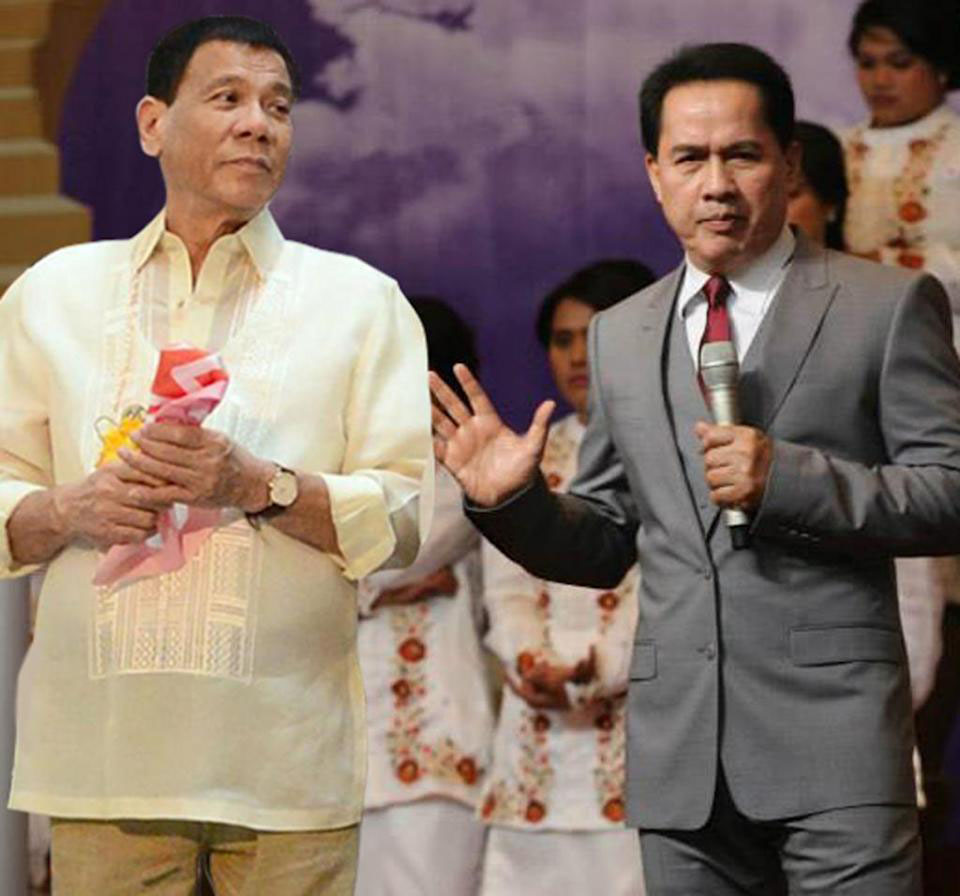 “PASTOR” Apollo Quiboloy — President Rodrigo Duterte’s longtime friend and “spiritual adviser” who calls himself “Owner of the Universe” and “Appointed Son of God” — along with some U.S. based administrators of his mega-church Kingdom of Jesus Christ, has been indicted by U.S. courts on November 18, 2021 for sex trafficking operation that was supported by funds solicited by U.S. donors here in the United States.

The indictment also stated how Quiboloy used his media empire to spread disinformation about his operations and to intimidate and destroy the reputation of people who managed to escape, and “to discourage other victims from leaving, retaliate against and discredit the victims, and conceal the sexual activity between defendant Quiboloy and the victims”.

The details as stated by the United States Department of Justice, U.S. Attorney’s Office, Central District of California:

A superseding indictment unsealed today charges the founder of a Philippines-based church and two top administrators of orchestrating a sex trafficking operation that coerced girls and young women to have sex with the church’s leader under threats of “eternal damnation.”

The superseding indictment expands on allegations made early last year against three Los Angeles-based administrators of the church, which is known as the Kingdom of Jesus Christ, The Name Above Every Name (KOJC). The nine defendants named in the 42-count superseding indictment are charged with participating in a labor trafficking scheme that brought church members to the United States, via fraudulently obtained visas, and forced the members to solicit donations for a bogus charity – the Glendale-based Children’s Joy Foundation (CJF) – donations that actually were used to finance church operations and the lavish lifestyles of its leaders. Members who proved successful at soliciting for the KOJC allegedly were forced to enter into sham marriages or obtain fraudulent student visas to continue soliciting in the United States year-round.

The superseding indictment, which was returned by a federal grand jury on November 10, expands the scope of the 2020 indictment by adding six new defendants, including the KOJC’s leader, Apollo Carreon Quiboloy, who was referred to as “The Appointed Son of God.”

Three of the new defendants were arrested today by federal authorities. The remaining three, including Quiboloy, are believed to be in the Philippines.

The defendants charged in the superseding indictment are:

Quiboloy, believed to be 71, whose primary residence is a KOJC compound in Davao City, Philippines, but who also maintained large residences in Calabasas, California; Las Vegas, Nevada; and Kapolei, Hawaii;

Teresita Tolibas Dandan, also known as “Tessie” and “Sis Ting,” 59, of Davao City, the “international administrator” who was one of the top overseers of KOJC and CJF operations in the United States;

Helen Panilag, 56, of Davao City, the one-time top KOJC administrator in the U.S., who oversaw the collection of financial data from KOJC operations around the globe;

Felina Salinas, also known as “Sis Eng Eng,” 50, of Kapolei, Hawaii, who allegedly was responsible for collecting and securing passports and other documents from KOJC workers in Hawaii, as well as directing funds solicited to church members to church officials in the Philippines (arrested today);

Guia Cabactulan, 61, the lead KOJC administrator in the United States who operated the KOJC compound in Van Nuys (charged in original indictment);

Amanda Estopare, 50, another Van Nuys-based administrator who was in charge of tracking and reporting the money raised in the U.S. to KOJC officials in the Philippines (charged in original indictment);

The three arrested today are expected to make their initial appearances this afternoon in United States District Court in Los Angeles and Honolulu.

The superseding indictment charges Quiboloy, Dandan and Salinas with participating in a conspiracy to engage in sex trafficking by force, fraud and coercion, as well as the sex trafficking of children. These three defendants allegedly recruited females ranging from approximately 12 to 25 years of age to work as personal assistants, or “pastorals,” for Quiboloy.

The indictment states that the victims prepared Quiboloy’s meals, cleaned his residences, gave him massages and were required to have sex with Quiboloy in what the pastorals called “night duty.” The indictment specifically mentions five female victims, three of whom were minors when the alleged sex trafficking began.

The indictment alleges the sex trafficking scheme started no later than 2002 and continued to at least 2018, during which time Quiboloy and his top administrators caused the victims to engage in commercial sex acts by ordering female victims, including the minor victims, to have sex with defendant Quiboloy on a schedule determined by the church leader and others, including Dandan. The victims who were obedient were rewarded with “good food, luxurious hotel rooms, trips to tourist spots, and yearly cash payments that were based on performance” – which were paid for with money solicited by KOJC workers in the United States, according to the indictment.

As part of the alleged scheme, the three defendants told female victims who expressed hesitation at night duty “that they had the devil in them and risked eternal damnation.” Furthermore, Quiboloy would threaten and physically abuse victims who attempted to leave KOJC or were not available to perform night duty, according to the indictment, which also alleges Quiboloy would physically abuse victims for communicating with other men or engaging in other behavior that upset him because he considered such conduct adultery and a sin.

Victims who managed to escape KOJC suffered retaliation in the form of threats, harassment and allegations of criminal misconduct, according to the indictment. “Defendant Quiboloy would give sermons, broadcasted to KOJC members around the world, in which he would allege that victims who escaped had engaged in criminal conduct and sexually promiscuous activity, and therefore faced eternal damnation, in order to discourage other victims from leaving, retaliate against and discredit the victims, and conceal the sexual activity between defendant Quiboloy and the victims,” the indictment states.

Quiboloy has been on the radar of U.S. authorities since Feb. 13, 2018, when he was detained for a day in Honolulu after customs officials found gun parts, at least US$335,000 and another $9,000 in Australian dollars hidden in luggage in his private aircraft,” the Philippine Daily Inquirer reported. The Filipino Channel’s daily newscast “Balitang America” has been reporting on the accusations against Quiboloy since 2018.

Quiboloy founded megachurch Kingdom of Jesus Christ (KOJC), The Name Above Every Name, in 1985. According to the Inquirer report, the church claims a following of over 6 million in 200 countries.

This network is based in Davao City and Makati in Metro Manila, and operates on multi-platform: via terrestrial broadcast in the Philippines, and on cable, satellite, and online streaming worldwide.

As reported in its “About” page, this network now owns and operates two television channels, where the main flagship channel, based in Davao City, maintains an uninterrupted 24-hour service through regular repetition of a dozen self-produced Kingdom Programs in English, Tagalog, and dozens of foreign languages along with news, public affairs, and sports programs.

SMNI has two television channels and 17 radio stations operating nationwide. SMNI News Channel was launched in May of 2016.

The aforementioned developments and facts beg the answers to the following questions: