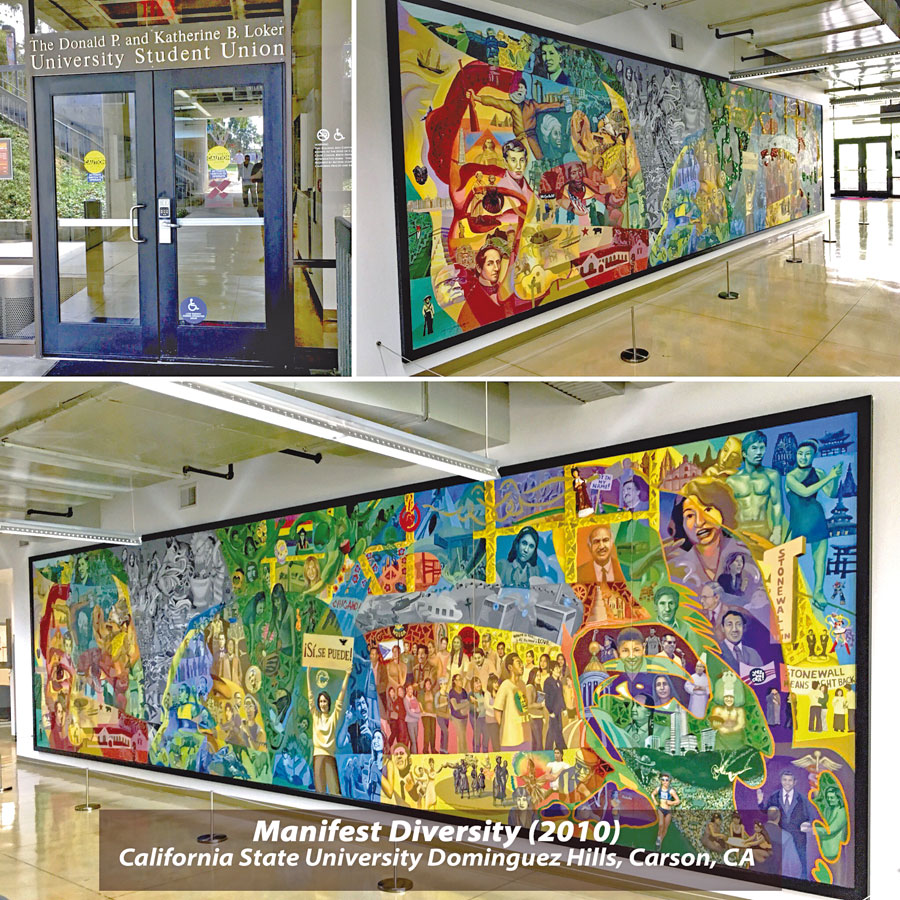 SAN PEDRO, CA – In conjunction with “Recuerdos-Souvenirs,” New Works by Eliseo “EL1SY” Art Silva which opened at Pinta*Dos Philippine Art Gallery on October 3 and will be up until November 23, 2019, the artist will conduct a guided tour of his Carson-based “recuerdos” on Friday, October 25 from 1:30pm -4:00 pm.

Dubbed as the “First Filipino Heritage Tour of Carson,” it will be free and open to the public. The meeting place will be the Rizal Monument at the Carson Civic Center at 1:30 pm sharp, to be followed by stops at the following places: Manifest Diversity Mural (2010) which is located at the Loker Student Union at California State, Dominguez Hills, and the Roots and Wings Mural (1996) which is beside the Maynila Restaurant on Main Street. A visit to Recuerdos’ satellite art exhibit called The Philippine Masters Collection (2019) inside the Mabuhay Credit Union on 146 W Carson St. is included in the tour.

Mabuhay Credit Union’s Philippine Master’s Collection by Eliseo Art Silva visually introduces Philippine Masters into the U.S. cultural landscape, reinterpreted into new paintings designed to contextualize the Filipino story in America. Silva considers these series of large-scale canvases (three 6’ x 6’ paintings of Luzon, Visayas and Mindanao as the subject and a 12’ x 6’ panel honoring the masterpieces of Juan Luna with the Republic of the Philippines as the “main event”), to be the exact studio art/ painting counterpart and equivalent of his first city-commissioned public art work: the 1995 Gintong Kasaysayan Filipinotown mural of Los Angeles. This seminal series is not only one of only two American sites to honor Philippine Masters (the other is the Philippine Nationality Room, at the University of Pittsburgh, in Pennsylvania, brings to full-circle his signature art in the US (the 1995 LA Filipino mural), but also signals the artist return to his first love: painting.

To end the tour, there will be a “No-Host Merienda” at Goldilocks which is located on Main and Carson Streets.

Since artist Eliseo Art Silva is relocating to the Philippines by November 2020, “Recuerdos-Souvenirs” is his last solo exhibition as a US-based artist. This exhibition and guided tour of his public art will give viewers a chance to see both his new and old works before he restores his original trajectory to create art as a Philippines-based painter, thus this new collection was called recuerdos (souvenirs).

When Pinta*Dos Art Gallery opened its doors in June 2017, he was the inaugural artist and his works were on an extended exhibition for six months because of the interest it has generated. The gallery is located at 479 W Sixth St, Suite 105, Historic Arts District,, San Pedro, CA. Anyone interested in the tour should email Linda Nietes-Little : info@philippinebookshop.com or call 310-514-9139 or 310-548-8148.

Tasting the flavors of Taiwan at 99 Ranch Market