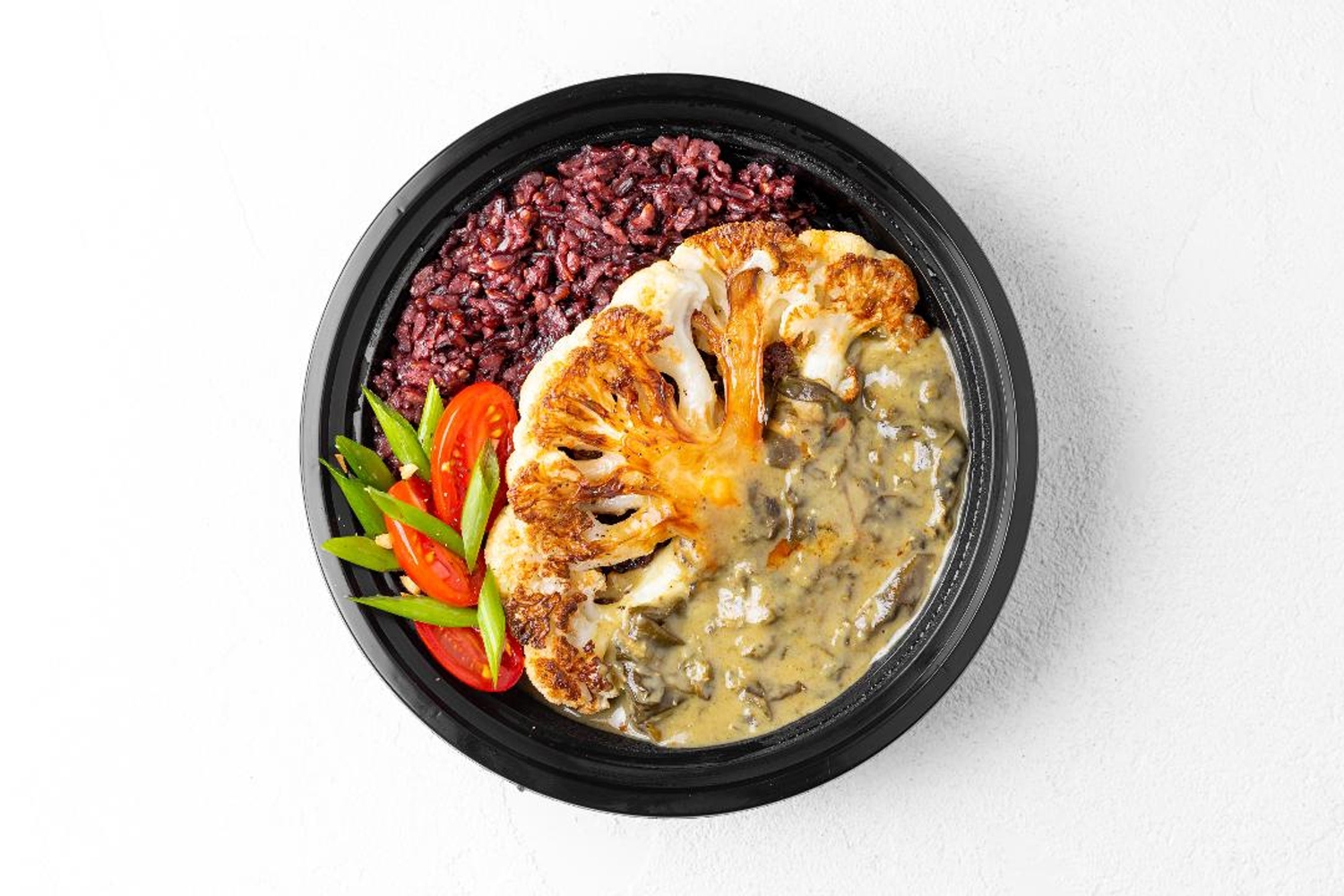 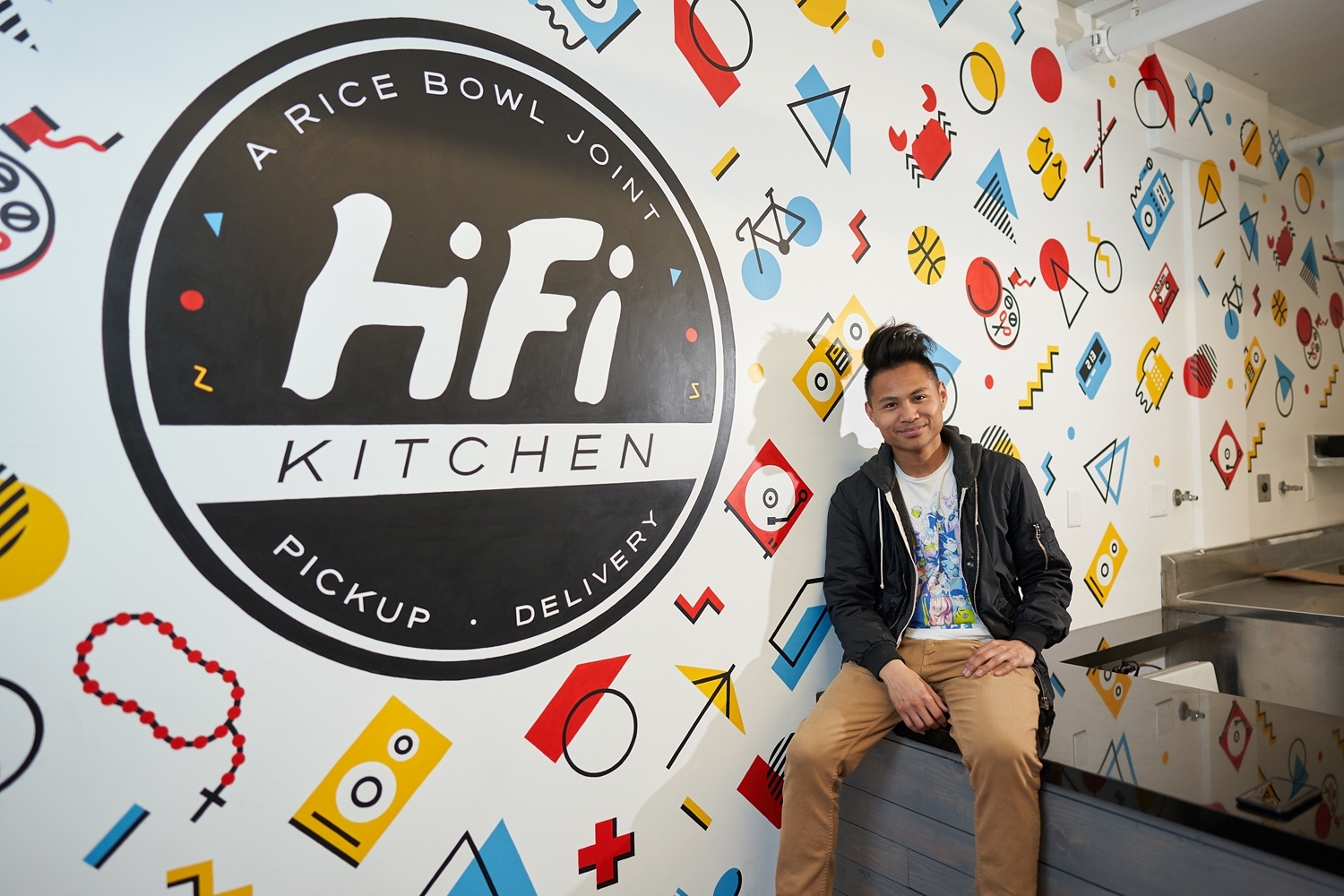 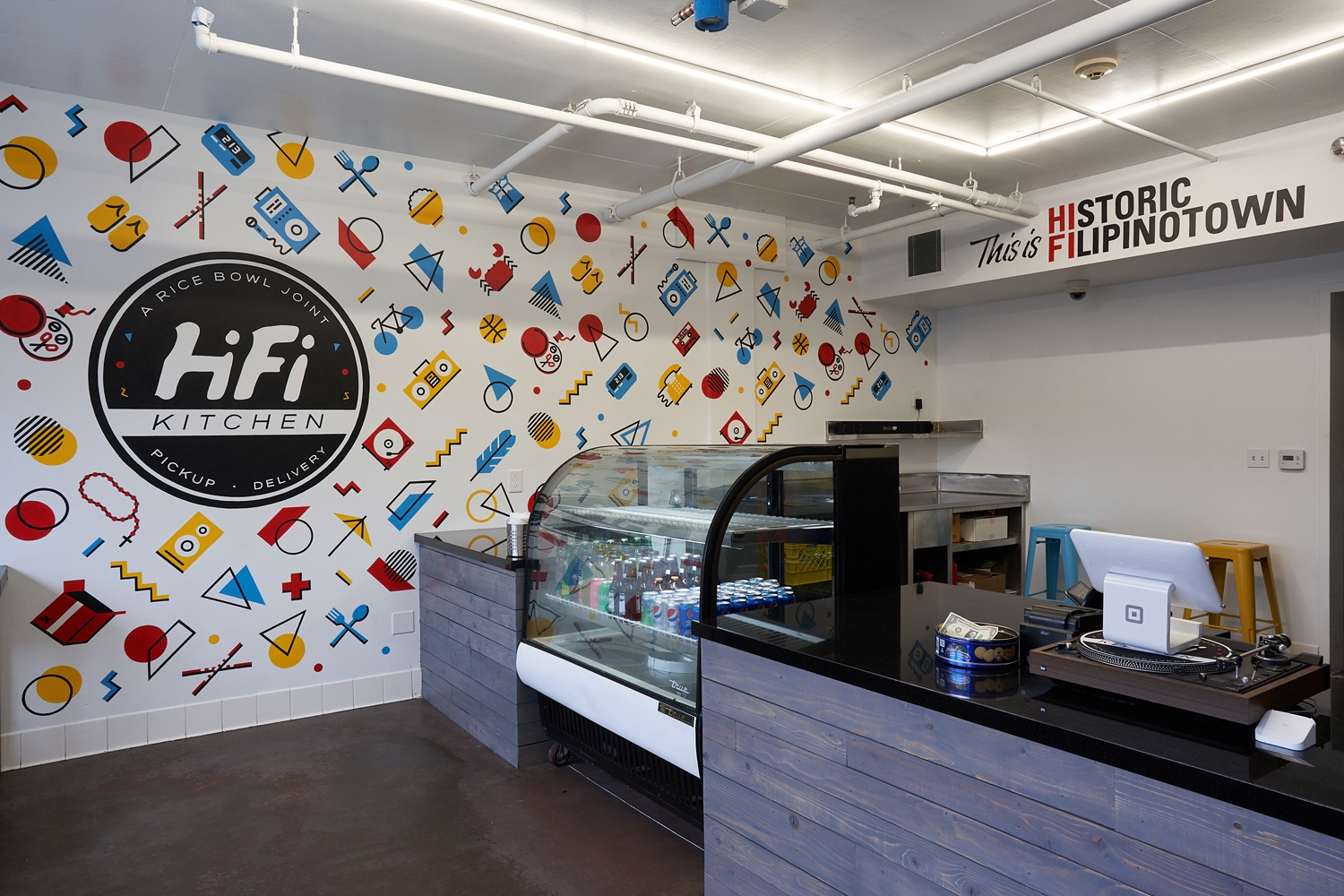 An inside look into HiFi Kitchen, which features a ’90s-inspired mural with elements representative of the second-generation Fil-Am experience. 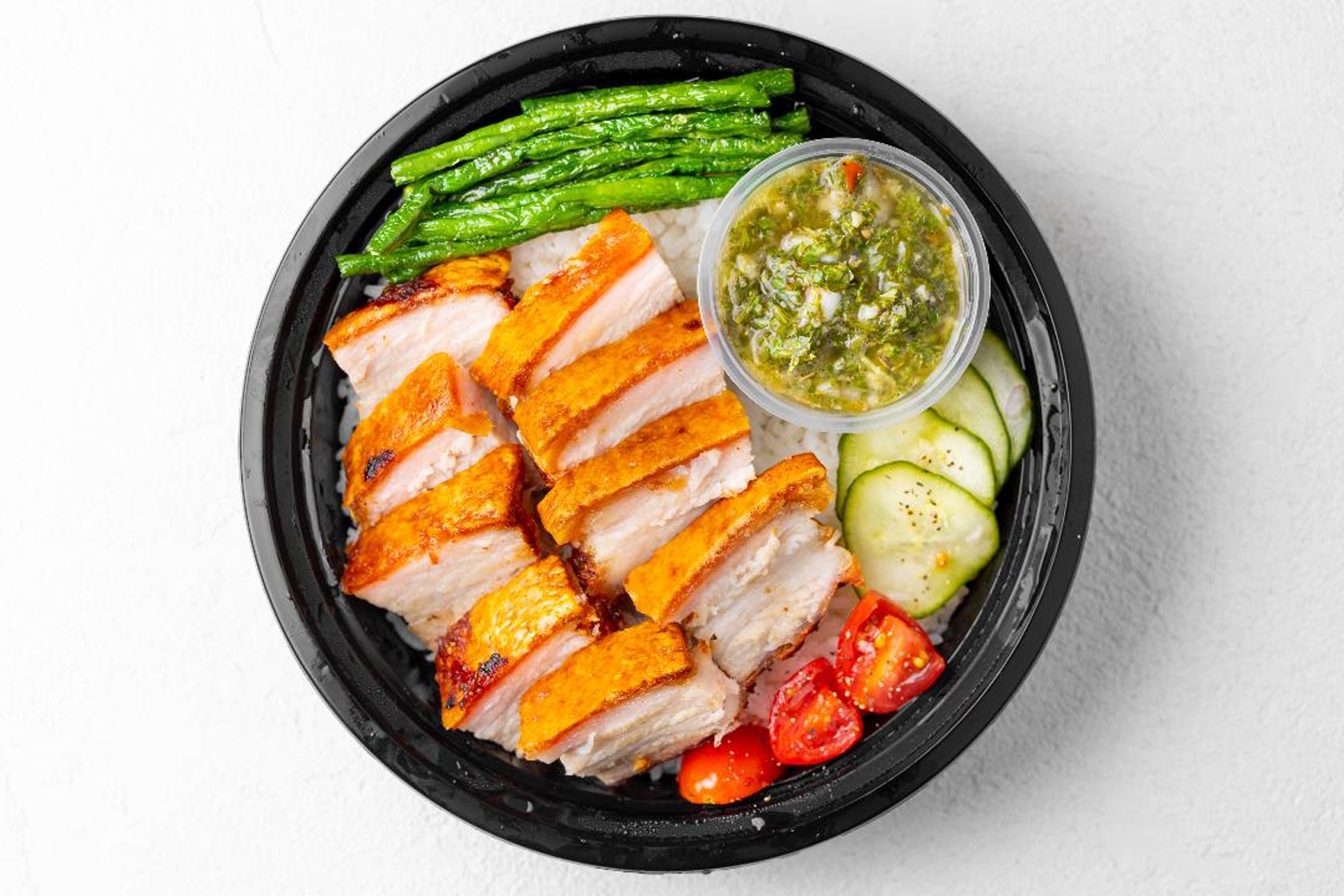 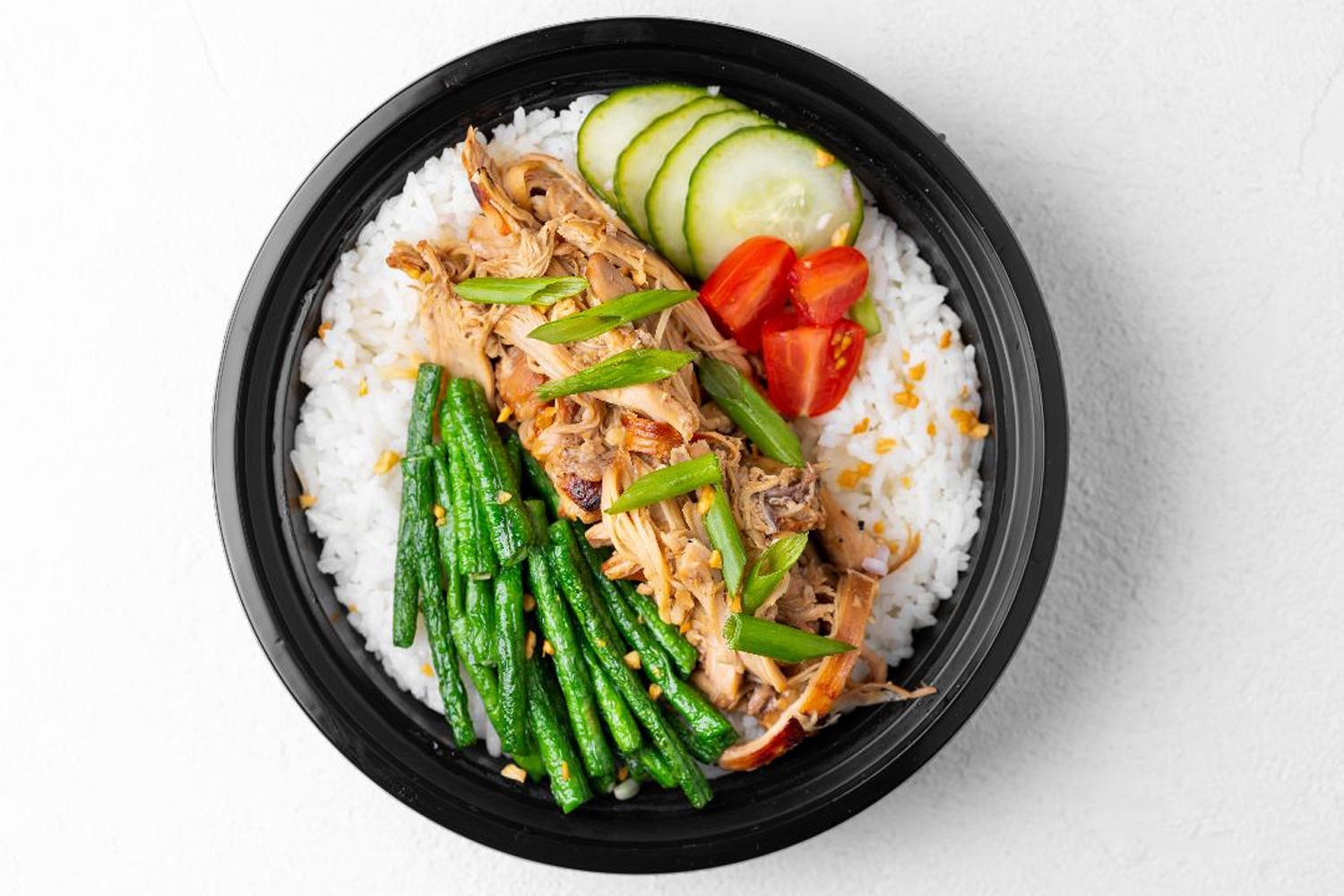 WHETHER you’re vegan, have a shellfish allergy, want a quick rice bowl with ulam, or are unfamiliar with Filipino food, a new Filipino-American café in Historic Filipinotown seeks to satisfy all of the above.

HiFi Kitchen, a fast-casual, weekday spot, comes from Justin Foronda of the Benaddictz brunch pop-ups and a long-time resident of the neighborhood.

It officially opens for full-service on Monday, February 25, with a grand opening preview this Friday night, February 22.

“It’s important for me to make this [food] accessible. People may view this place as an intro to Filipino food,” Foronda tells the Asian Journal. “Maybe Filipino people want to bring their friends who aren’t Filipino and that can lead to going to other traditional places in the area.”

What particularly stand out at HiFi Kitchen are the vegetarian/vegan-friendly bowls — vegetable kaldereta (featuring lentil pâté), mushroom adobo, and laing (taro leaves cooked in coconut milk) using vegan ‘bagoong’ with a choice of seared cauliflower on top (or chicken or pork belly for the meat eaters).

The patis (fish sauce) and Mang Tomas-inspired sarsa are vegan as well and made in-house, with the latter using apples and lentils instead of pork liver.

“I wanted to honor different dietary styles, especially being in LA. I got interested in vegan food just through my medical background and fitness. I was fascinated by how I can recreate something without its main ingredient. I took that on as a challenge,” Foronda says, but is not trying to be “trendy” by having vegan options.

With a career as a registered nurse, Foronda considers himself a self-taught chef — apart from three months in a culinary program — and food as his artistic outlet.

“I would pick up notes from my family [too]. But for the most part, it was me experimenting and being inspired by other people doing it,” he says, noting his creative background in breakdancing and music. “A lot of it came from being creative from dancing, seeing other things connected in regard to flavors…rather than moves.”

He started Benaddictz back in 2015, hosting brunches in his own backyard, friends’ homes, rental lofts, cafes around the area, and special events. The popular gatherings featured dishes like chicken adobo benedict, sisig hash, and ensaymada French toast.

About two years ago, Foronda was introduced to the landlords of the café space in Historic Filipinotown and envisioned it as a restaurant for Benaddictz. However, he didn’t want to squeeze the concept into a small space, when brunch is usually a time for leisurely group dining.

He credits Nicole Ponseca of Maharlika and Jeepney in New York along the way for helping him narrow down his concept to “something more personal” that touches upon his HiFi upbringing. Kristine de la Cruz of Crème Caramel and FrankieLucy Bakeshop guided him while writing the business plan.

“With the changes to the neighborhood and the situation we had here [at the space], I thought that something else needs to go here,” Foronda says. “The space used to be called the Village Kitchen and the kitchen part is a shout out to what used to be here and HiFi, obviously, for the neighborhood. I want all of us to feel like this is something we own.”

HiFi Kitchen sits at the ground floor of a residential building along Beverly Boulevard, across the street from Unidad Park, which houses Eliseo De Silva’s mural “Gintong Kasaysayan, Gintong Pamana (A Glorious History, A Golden Legacy).”

Inside the café are no more than five seats at the counter (the food is truly meant for takeout) and a colorful, ‘90s-inspired mural painted by artist Remo Bang with symbols — from a karaoke machine to balikbayan box — to signify the “Filipino-American experience.” The panel above the register says “This is Historic Filipinotown.”

The physical space itself may be small, but Foronda sees it as another marker that Filipino businesses and residents still exist in Historic Filipinotown and aren’t going anywhere.

An ordinance before the LA Department of City Planning proposes designating a “North Westlake Design District” that has standards for future development to include more mixed-use buildings, pedestrian-friendly areas, and regulations on signs.

“We’re here to deepen the roots of the neighborhood. We’re here to support the visibility of the neighborhood and we’re going to start there. If we move Filipino food in a direction in the process, that’s great…but I’m not doing any groundbreaking things personally,” he says, adding “This was going to happen regardless of Filipino food getting popular or being the next big thing. I would have tried this out anyway.”

Ahead of the grand opening, Foronda plans to launch an Indiegogo crowdfunding campaign where “people in the neighborhood [can] contribute back into the community and help us out.” As the sole owner of Hifi Kitchen, he used savings from his nursing career and mom.

Foronda hopes that in the long run, his story can inspire others to take on a hobby or side hustle.

“When I mentioned that I don’t consider myself a chef, it’s not just out of respect for those who studied but also in representation of those who want to follow their dreams, take a leap,” he says. “I’m proud to be a self-taught cook, I think there’s something to be said about the resiliency and creativity of those who pick up ‘hobbies’ on their own and if my journey inspires someone to want to teach themselves how to play…piano, for example, I’d feel like I did something right.”

The café, which had been delivery-only since November, softly opened its doors earlier this month and held a community “eat and greet” last Sunday, February 10. It will hold its grand opening event on Friday, Feb. 22 from 6 to 9 p.m. open to the public and featuring the full menu and some complimentary bites.

HiFi Kitchen (1667 Beverly Blvd., Los Angeles, CA 90026) will regularly be open Monday to Friday from 11 a.m. to 3 p.m. for now starting Monday, Feb. 25 and will continue to take delivery orders through Grubhub and Postmates until 6 p.m. More hours are to be announced.

Palace: First daughter Sara Duterte could be the next president