THERE are many Filipino dishes typically take a long time to cook, with nilaga, pata tim and bulalo to name a few.

We can remember our mothers and grandmothers slaving it in the kitchen boiling and braising pork or beef bones. We also remember that trusted pressure cooker, which comes out to help shorten the prep and cook time for many of these dishes.

A whiff of the dish wafting in the kitchen and eventually tasting it usually triggers nostalgia, bringing back memories of days past. Such is the immense power of food.

That is why the Instant Pot is a lifesaver and a Godsend for working moms and dads who crave these classics once in a while.

There’s no shortage of Instant Pot groups on Facebook, one just needs to look hard. Among them is the Filipino Recipes Instant Pot Community, which as of press time has 40,300 plus members and counting, making it one of the largest and most active Filipino Instant Pot (IP) congregation on the web.

When Jorell and Tisha Domingo got their Instant Pot, they were a bit overwhelmed and went on Facebook to see if there was a group or a community focused on Filipino recipes for what she calls “a magic little machine.” They came up empty-handed so they decided to start one. That was in February 2018.

There were a few rules, among them keeping the focus on Filipino recipes cooked using the Instant Pot and if possible, posting the photos and the recipe along with the posts.

Last month, they announced the release of “The Filipino Instant Pot Cookbook: Classic and Modern Filipino Recipes for Your Electric Pressure Cooker.” 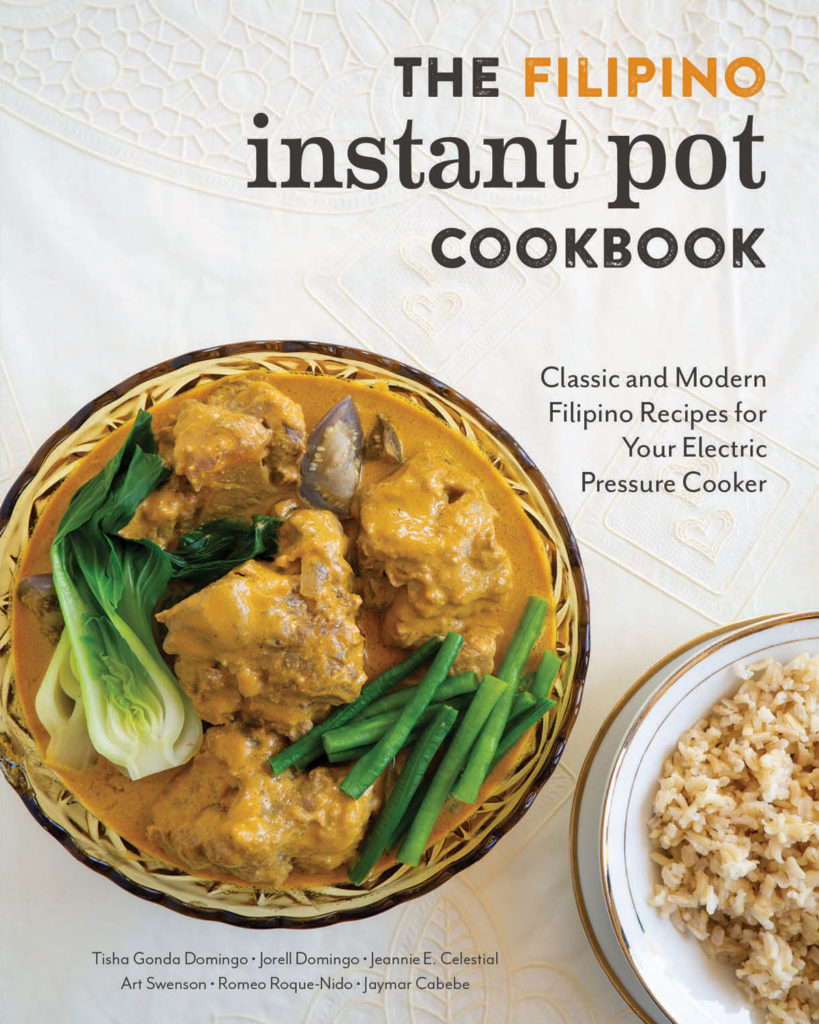 In the book, its six authors — Tisha and Jorell Domingo, Jeannie E. Celestial, Art Swenson, Romeo Roque-Nido, and Jaymar Cabebe — set out to explore their Filipino heritage and intimate family histories, one dish at a time. The result was a collection of over 75 Filipino recipes, all carefully translated for preparation in the Instant Pot, today’s most essential piece of kitchenware.

“Late last year, some friends approached us about joining them in converting our collective family recipes into a cookbook. Tisha and I agreed that it would be a pretty cool thing to preserve our family history and culture in this special way,” Jorell posted in the Facebook group.

“It’s been such a great and eye-opening experience. We especially appreciate the spirit of bayanihan that comes alive in our/your sharing of stories, photos, cooking tips, and recipes,” he added.

The authors all currently live in California and self-identify as second-generation Filipina and Filipino Americans. They all have young children, so there’s a need to prepare dishes quickly and easily (Filipino or otherwise).

“The IP has certainly been a game-changer for all of us. And we, of course, would love to see Filipino cuisine continue to make its way into mainstream American culture…this is our little contribution to that movement,” Jorell added.

Many of the members shared how they used the Instant Pot to cook Filipino dishes for their Thanksgiving feast, and are planning to cook the same for the upcoming holidays, particularly for Noche Buena and Christmas Day grub.

Members shared the usual, from lechon kawali to mechado and desserts such as leche flan and bibingka. Others were more adventurous, coming up with ube coconut tart and using ube for their sweet potato casserole, showcasing the range of dishes that can be done using the kitchen workhorse.

“To truly appreciate and understand Filipino dishes, you have to understand the evolution of the spices, the nuances of the flavor profiles, the land from which these dishes were birthed. That’s what this book provides. This is not just a book of recipes; this is a book about our story,” said Pati Navalta Poblete, editor-in-Chief of San Francisco Magazine.

For many of the Instant Pot diehards and believers, the appliance is the best to use when it comes to cooking Filipino food.

From classic dinner staples like the traditionally sour Sinigang na Baboy (pork tamarind soup) to sweet treats like Putong Puti (steamed rice cake), the rich flavors of Filipino food are typically unlocked through a long braise or boil, a delicate steam, or some other treatment by moist heat. Fortunately, this is exactly what the Instant Pot does best.

“The Filipino Instant Pot Cookbook” is an absolute must-have for every modern home cook and the timing of its publication could not have been any more perfect as Filipino food is fast becoming a mainstay in the consciousness of foodies from around the world.

“I believe that anyone can become a great Filipino cook. However, cooking new food can sometimes feel intimidating. The Filipino Instant Pot Cookbook helps any level of cook step into the kitchen and create delicious Filipino food, the kind you thought only your mom and aunts could make for you,” said Chef Dominic Ainza, an experienced restaurant owner and corporate chef.

That’s one of the good things about the Instant Pot. You can easily cook for a small group or you can create a feast enough for the extended family, friends and neighbors included.

It was actually her mother who introduced her to Instant Pot, according to Tisha Gonda Domingo. She quickly developed her expertise cooking with the electric pressure cooker through practice with traditional Filipino ingredients, methods, and dishes.

Through her first published work, The Filipino Instant Pot Cookbook, Tisha offers personal stories and family recipes that bring her love for food, community, and Filipino culture together. Outside of her work as an author and home cook, Tisha works in publicity for a major television studio. She currently lives in Orange County, California, with her husband, Jorell, and two children.

One of the book’s authors, Jeannie E. Celestial was born on Guam and raised by Filipino parents and grandparents who were skilled farmers. They helped develop her cooking instincts early on, instilling in her a deep understanding of and respect for traditional Filipino ingredients.

In addition to her work with food, Jeannie is a practicing psychologist who is committed to holistic wellness and fostering healthy Filipinx (Filipino/a/x) communities.

Earlier this week, Celestial and her husband Art were on Good Day, Sacramento talking about the cookbook and showcasing the ease in cooking with the Instant Pot. They served adobo sa gata, ginataang sitaw at kalabasa, Filipino style spaghetti, ginataang mais and mango royale cheesecake, all done using the versatile kitchen gadget.

“The Filipino Instant Pot Cookbook” brings her passions together, allowing her to promote mental health through food, helping to break down colonial mentality by proudly sharing the recipes, stories, and cultural practices of her motherland, the Philippines. She currently works in Vallejo, California.

Born and raised in the San Francisco Bay Area, Romeo Roque-Nido’s cooking was influenced early on by a diversity of cultures before being broadened further during his time as a world-traveling student in the California Maritime Academy.

While his culinary influences are varied, his truest passion Filipino cuisine. With The Filipino Instant Pot Cookbook, Romeo hopes to preserve the rich culinary heritage of the Philippines, by using modern appliances to make it more accessible to even the busiest of families. He lives in Vallejo, California with his wife and two children.

This holiday season, instead of using multiple pots and pans and spending time over the stove, let the Instant Pot do all the work so you can spend more time with loved ones.

Give the gift of knowledge with these books by Filipino authors

How to make ube cheesecake in an Instant Pot