Gout is a painful and debilitating condition that develops in some people who have chronically high blood levels of urate (commonly referred to as uric acid) that leads to tophus (lump nodules formation), arthritis, hypertension, heart and renal failure.

RISK FACTORS — Gout is most common in men between 30 and 45, and in women between ages 55 and 70. It is estimated that gout affects approximately 2 percent of people in the United States. The following characteristics increase the risk of developing gout:

SYMPTOMS — Gout attacks cause sudden severe joint pain, sometimes with redness, swelling, and tenderness of the joint. Although an attack typically affects a single joint, some people develop a few inflamed joints at the same time. The pain and inflammation are worst within several hours, and generally improve completely over a few days to several weeks, even if untreated.

Chronic tophaceous gout — People who have repeated attacks of gout over many years can develop tophaceous gout. This causes large numbers of urate crystals to collect in joints, bones, and cartilage. The urate collection causes a nodule or mass called a tophus (plural tophi) to form. The tophus causes resorption and erosion of the bone, and can potentially cause deformity 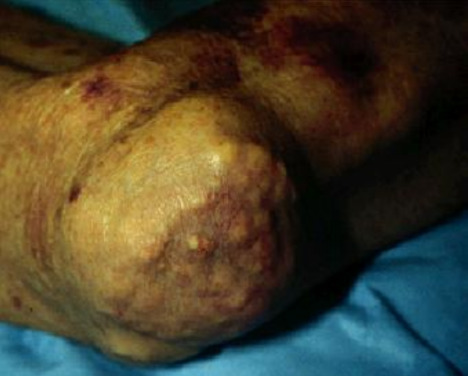 The presence of tophi near the knuckles or small joints of the fingers can be a distressing cosmetic problem. Tophi are usually not painful or tender. However, they can become inflamed and cause symptoms like those of an acute gouty attack. 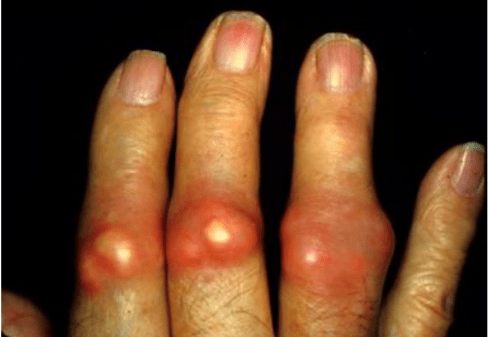 Tophaceous gout was more common in the past, when treatment for hyperuricemia was unavailable. Certain groups are still at risk for tophaceous gout, including:

The risk factors listed previously can also contribute to the development of tophaceous gout.

URINARY COMPLICATIONS — People with gout are at increased risk of developing kidney stones. Uric acid crystals can collect in the urinary tract and form a stone. If a stone is large enough, it can block one of the tubes (ureters) that carry urine from the kidney to the bladder and out of the body. 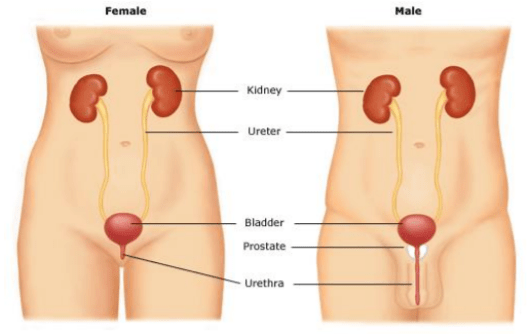 Rarely, urate crystals collect in the kidney tissue itself, where they can cause inflammation and scar tissue, which reduce kidney function. Medications that increase the amount of uric acid excreted by the kidneys may help to reduce the risk of developing kidney stones. Hyperuricemia or excess uric acid can lead to kidney failure, hypertension, and cardiovascular problems.

DIAGNOSIS — There are many illnesses that can cause joint pain and inflammation. Gout is strongly suspected if a person has an acute attack of joint pain, followed by a period when there are no symptoms. It is important to confirm the diagnosis of gout to ensure that potentially harmful medications are not taken unnecessarily over a prolonged period of time.

The best way to diagnose gout is to examine synovial fluid from an affected joint, to look for urate crystals in the sample. To obtain the fluid, the provider uses a needle and syringe to withdraw a small amount of fluid from inside the joint. Tophi located just beneath the skin can be sampled with a needle to diagnose tophaceous gout.

However, some people do not have urate crystals in their synovial fluid when symptoms are present. In this case, the diagnosis is based upon a person’s symptoms and a physical examination. Criteria for diagnosing gout include:

TREATMENT OF GOUT ATTACKS — The goal of treatment of flares of gouty arthritis is to reduce pain and inflammation quickly and safely. It may be necessary to use more than one drug to achieve this goal. Deciding which medication to use is based upon several factors, including a person’s risk of bleeding, their kidney health, and whether there is a past history of an ulcer in the stomach. Anti-inflammatory medications are the best treatment for acute gout attacks and are best started early in the course of an attack.

People with a history of gout should keep medication on hand at all times to treat an attack because early treatment is an important factor in decreasing the pain and severity of an attack. Nonsteroidal anti-inflammatory drugs — Nonsteroidal anti-inflammatory drugs (NSAIDs), work to reduce swelling in a joint, and include ibuprofen (Advil®, Motrin®) and indomethacin (Indocin®)

NSAIDs are most effective in the treatment of a gout attack when they are started as soon as possible, before the attack is full blown. People who have had previous attacks may start taking an NSAID at the first signs of a recurrence.

Although aspirin is an NSAID, it is not usually recommended for the treatment of gout because of it’s potential impact on levels of urate in the blood.

Steroids — Steroids, also known as glucocorticoids, are effective anti-inflammatory agents. Commonly used oral steroids include prednisone, prednisolone, and methylprednisolone. Steroids may be used if NSAIDs and colchicine cannot be used. They may be injected directly into the affected joint (called an intraarticular injection) or they can be given as pills or by intramuscular injection. People who have multiple affected joints or who cannot take NSAIDs or colchicine may be given oral steroids. However, there is an increased risk of recurrent gout attack (called rebound) in people who take oral steroids. For this reason, steroids should be tapered slowly over a period of seven to 10 days.

PROPHYLACTIC THERAPY — Prophylactic therapy aims to prevent or reduce the occurrence of acute flares of gouty arthritis. Colchicine is usually recommended as prophylactic therapy; it is taken daily at low doses to avoid gastrointestinal side effects. Colchicine reduces the frequency of acute gout attacks, particularly while starting other drugs that lower urate levels. Prophylactic colchicine is not usually used as a long-term (years) treatment, but is a helpful bridge as a person progresses from an acute flare to preventive therapy. Although not as well documented as colchicine, daily NSAIDs are sometimes used for prophylactic therapy, and may have an advantage (because of pain relieving properties) for people who also have osteoarthritis.

PREVENTIVE THERAPY — Preventive therapy includes medications and dietary changes that can be used long-term to lower urate levels and prevents the progression of gout. Progressive gout can cause bone destruction and deformity (gouty arthropathy), disability, kidney stone formation, and, possibly, kidney damage. People who have one or more of these complications are strongly encouraged to take a urate lowering treatment.

Not everyone with gout will require preventive therapy; those who have rare or mild attacks are often able to manage their gout by treating the acute attacks alone. On the other hand, people with sporadic gout flares that are unusually prolonged, painful, and/or disabling are often encouraged to take preventive therapy.

Medications — Urate-lowering or antihyperuricemic medications lower urate levels by helping to eliminate or decrease production of uric acid. Antihyperuricemic therapy is usually started after a gout attack has resolved. People who take their medication regularly experience fewer attacks. At present, preventive therapy is recommended indefinitely because there is no benefit to taking a break from medication.

Probenecid increases the efficiency of uric acid excretion by the kidney, and is called a uricosuric drug. Benzbromarone is a more potent uricosuric drug, but is not available in the United States. Both drugs can cause side effects, including rash, stomach upset, and kidney stone formation.

Losartan is used to treat high blood pressure but also has a useful, though weak, urate-lowering effect, as does the lipid-lowering drug fenofibrate.

Allopurinol works by preventing the formation of uric acid. It is the most commonly used drug for lowering urate levels in gout. Allopurinol can cause side effects, including rash, lowered white cell and platelet counts, diarrhea and fever, although these problems occur in a relatively small percentage of patients.

Lowering urate levels is a process that can take weeks or months. Very rapid urate lowering can cause acute flares of gout. Medications to lower urate are generally started at a low dose and increased slowly until the blood urate level is reduced and maintained at a level where urate crystal formation is unlikely. Increased fluids are recommended during this time (at least two liters per day are recommended).

What is New in Gout Therapy?

If you have more than one flare a year, it may be time to step up your gout treatment

Recurrent gout flares may be your body’s way of telling you that oral medicines aren’t doing enough to lower your uric acid level and prevent the harmful effects of out-of-control chronic gout.

Krystexxa has been helping gout patients for nearly 10 years. Studies show that one IV treatment every other week for about 6 months is all you may need to take control.

Oral gout medicines do not work the same way krystexxa does.

KRYSTEXXA has a different way of lowering uric acid levels, which is the key to stopping gout flares. In about 6 months, it can remove years of accumulated uric acid and Tophus your body

Dietary changes — Changes in diet may reduce the frequency of gout attacks in some people. Because obesity is a risk factor for gout, as well as for many other health conditions (heart disease, diabetes, high blood pressure), losing weight is an important goal. However, starvation or fad diets are not recommended Diet guidelines for patients with gout have changed over time, and it is not completely clear which combination of foods is best.

The current recommendations include reducing intake of red meat and seafood, and increasing intake of low fat dairy products and complex carbohydrates.

High-fructose corn syrup products, (such as some types of non-diet soda) increase blood urate levels and are not recommended.

Coffee may decrease the risk of gout . Vitamin C (500 mg/day) has a mild urate-lowering effect and may be recommended.

Changes in diet are often recommended along with medications, but the reduction in blood urate levels due to diet change alone is modest (15 to 20 percent), even with very strict diets.

WHERE TO GET MORE INFORMATION — Your healthcare provider or your Rheumatologist (Doctors who specialize in Arthritis and gout) is the best source of information for questions and concerns related to your medical problem.

Because no two patients are exactly alike and recommendations can vary from one person to another, it is important to seek guidance from a provider who is familiar with your individual situation