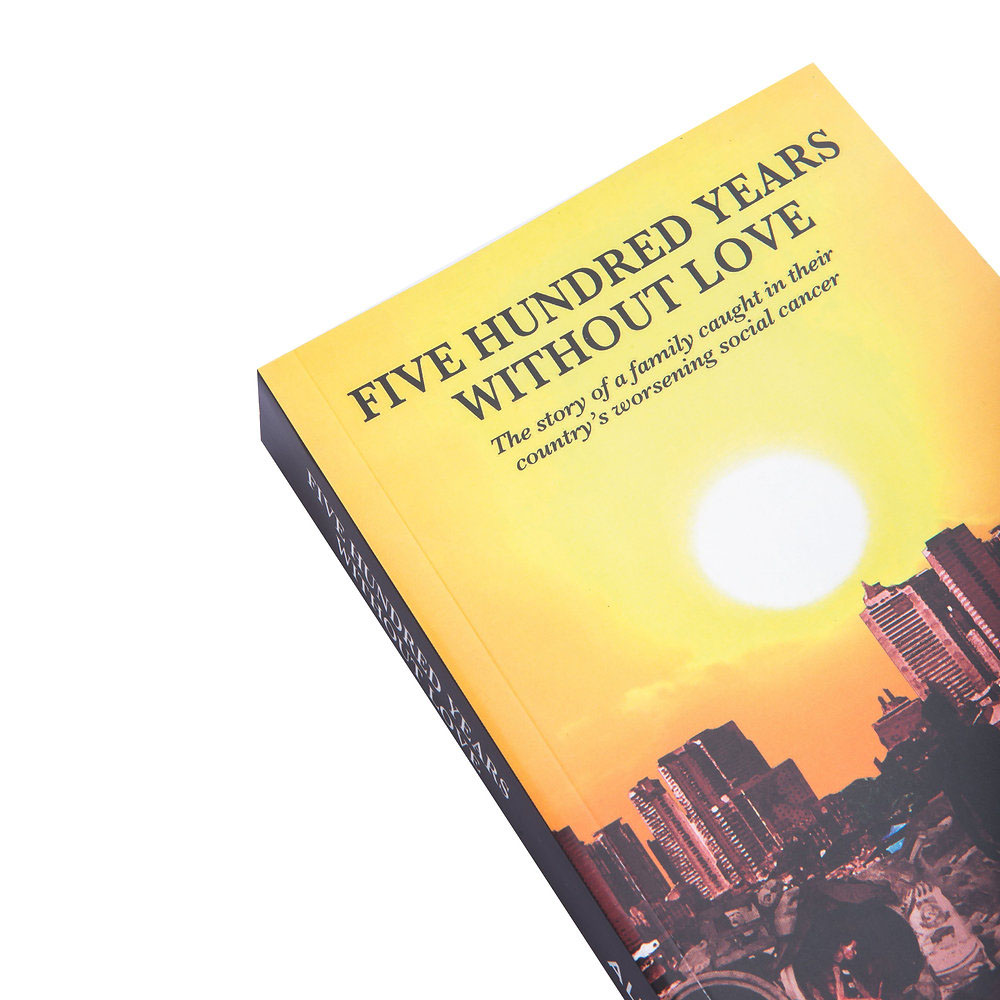 March 16, 1521 is one date that is known by students of Philippine history, as it’s the date when Ferdinand Magellan, a Portuguese national but worked as a mercenary of Spain, “discovered” the Philippines that put the country onto the map of the world powers (Spain and Portugal) then.

Due to this discovery, Filipinos could claim that the country has been “Christianized” over five centuries this year. However, to this day, the country is still searching her own place in the sun! In his book “Why are we poor,” the national artist F. Sionil Jose’s attempted to give valid reasons and enumerate many factors why. His other novels like “Po-on” or “Ermita” also contained fictional characters that represented leaders in business and politics, the rich and poor, and the exploiters and exploited in Philippine society.

Fast forward to January 2021, while “imprisoned” at home due to the COVID-19 pandemic, this writer just finished reading a 368-page book, titled “Five hundred years without love,” a novel by Atty. Alex Lacson, a best-selling author of a series of small books “12 Little Things Every Filipino Can Do to Help Our Country.” The novel is a painful journey of several tragic events and human drama that a poor family in Negros suffered profoundly as a result of a dysfunctional political system and unjust social-economic system that have become debilitating cancers with origins during the Spanish colonial

times. The narrations of the main character, Atty. Anton Hinirang, are so graphically alive to this day that you the sensitive reader (like this columnist) can feel the pains and lamentations of his family. Anton’s father, a poor farmer was mysteriously killed by “hired goons” to expedite the land-grabbing goals of corrupt politicians to expedite their family business expansion.

Months after the old man’s death was followed by another tragic murder of Anton’s brother, Teodoro, an honest-to-goodness policeman, whose killers remained unsolved as of the book’s publication. It is assumed by many residents of the town that the murders were premeditated as both father and son killings were carried out by two unknown men riding in tandem in motorcycles. The latter’s murder was to prevent the uncovering of his father’s murder. As tragic events often go by threes, Anton’s sister Phebe, a teacher-turned OFW in Saudi who worked as a domestic helper, mysteriously died purportedly by an exploiter-employer who hid his crimes for months. The OFWs are commonly known to be the “unsung heroes” of the Philippines as they are the #1 exports of the country that kept the nation afloat for decades.

Although many of these OFWs are college graduates, like Phebe millions of them opted to leave (the country) to live as their salaries/income in the Philippines as minimum wage earners cannot support a family to live decently as human beings as they always dreamed when they were in college.

A great percentage of these 11 million OFWs are compelled to leave their families to have a better life. The OFWs suffer much sacrifice work long and hard work just to earn more money to provide for the economic needs of the family that is left behind.

Filipinos leaving home to work as OFWs, however, creates many predictable social problems of the family as the children are forced to be taken care by other people who are not the parents (many times husbands and wives become OFWs too). Oftentimes, only one parent becomes an OFW, and both husband and wife suffer tremendous pressures to maintain a good happy family due to sheer absence.

In the case of Anton’s sister, Phebe, she opted to leave her teaching position to leave a very unhealthy working environment that was controlled by political benefactors! She left an employer that was corrupt only to suffer the ultimate sacrifice, coming home in a casket.

Anton’s other brother “Manong Jose” became a priest who tried very hard to “spiritually” rationalize or to create a defense mechanism to cope up with the family’s tragedies, until he himself, considered joining the NPA (New People’s Army) underground. He felt very sadly as a failed priest in his human mind. His expectations as an ordained priest were very high to cause tangible progress and better changes in his province. However, the reality seemed worse as the social environment is mired deeper in the mud of corruption, exploitation and extreme greed of those in power. Atty. Anton’s readings of history revealed that the exploitation and corruption remain remained alive and even became worse in so many areas of Philippine society today. The only things that changed are faces of the corrupt and greedy oppressors: from the mestizos with Spanish last names and whiter skins and now the Filipinos themselves!

The root cause of the metastasized cancer of the Philippines is too much greed from top to bottom of society: from politics to business and also the “forgiving” attitude and short memory of the Filipino people. Even commonly known corrupt politicians are “idolized” and even asked to be the honored “ninong or ninang” of the people’s children. As it is the practice of many, politicians dole out money far beyond their “nominal” salary, while having the power to “budget” public expenditures, that are padded to include kickbacks to the pockets of the politicians’ families. The money given to poor people is considered a good investment for their (lucrative government) business. This common practice creates many family political dynasties all over the Philippine archipelago. The political positions are held by family members: from one position another, father to mother to son and daughter, like a musical chair.

Mr. Alex Lacson, the author, speaking in the mouth of Professor Atty Anton blames and indicts the corrupt politicians, business people who are self-serving leaders as the # 1 culprit of the malaise of the Philippine society where millions of a vast majority of people are just existing, not living their full potential as God wants His children to live their full potential.

Mahatma Gandhi summed up seven major causes of the world’s social cancer, the great inequality of human resources and wealth, dividing deeply the lives of the few HAVES and the billions of HAVE NOTS, namely:

Politics without principle, business without ethics

Wealth without works, pleasures without conscience

Science without humanity, knowledge without character

This columnist agrees with the great Servant Leader, Mahatma Gandhi.

Furthermore, I also agree with the book author, Alex Lacson who I admire greatly for his exceptional optimism which I find very hard to totally embrace. I feel that the current crap — oops, crop — of leaders in the Philippines today do not have the political will to provide or initiate real and pragmatic solutions to make the country progress as the author dreams and hope. Simply because many will not kill the golden goose that preserves their centuries’ old power and wealth. No one among them will destroy their “future!”

Of course, no one including this columnist claims to have the right answer. However, I can posit a possible solution. If self-serving leaders were the culprit, let’s change them with true servant leaders like Mother (now Saint) Teresa and many missionaries like the Missionaries of the Poor (MOP) founded by Father Richard Ho Lung from Jamaica where many Filipinos are now joining.

These kinds of servant leaders already exist but they are not in the political or economic or business arena yet! In religious orders or communities, their “economic” system (although some deride it as communistic or socialistic) is much better as the members of the community are assigned where their talents, be in the classroom, kitchen or in the hospital or in the garden or even assigned as missionaries in other parts of the world like the U.S. Peace Corps that was created during the administration of President John F. Kennedy.

With genuine servant leaders, we can educate, motivate and develop the youth’s moldable young minds to have the common good always as the national mantra to transform the country economically and ethically to follow Gandhi’s formula.

If the young minds are not polluted and they are not trained to be greedy and self-serving like the generations before them, when their time to become leaders of the country, then we have a very good chance to have genuine servant leaders in a generation or two. That is my hope and dram for the country, to attain Gandhi’s ideal place where politics with principles, business with ethics, and knowledge with character exist.

Along with this ambitious strategy, I am proposing to flood Mr. Alex

Lacson’s books in as many high school or college libraries as possible, to be read by the youth, and then “create” regional essay contests after reading the book on a relevant topic like: “Youth can do little things to to help their country” and provide great prizes and awards as big enough incentives for the youth to read, think and write their ideas as young men and women as the hope of the motherland.

Last, but not least, I urge every Filipino to read “Five Hundred Years Without Love” and think and challenge himself about what he can do for his country.

By reading the novel, you can also find out what happened to Atty. Anton Hinirang in the book! Happy reading.

Good luck and God Bless the Philippines! God Bless all of us during these challenging COVID times!