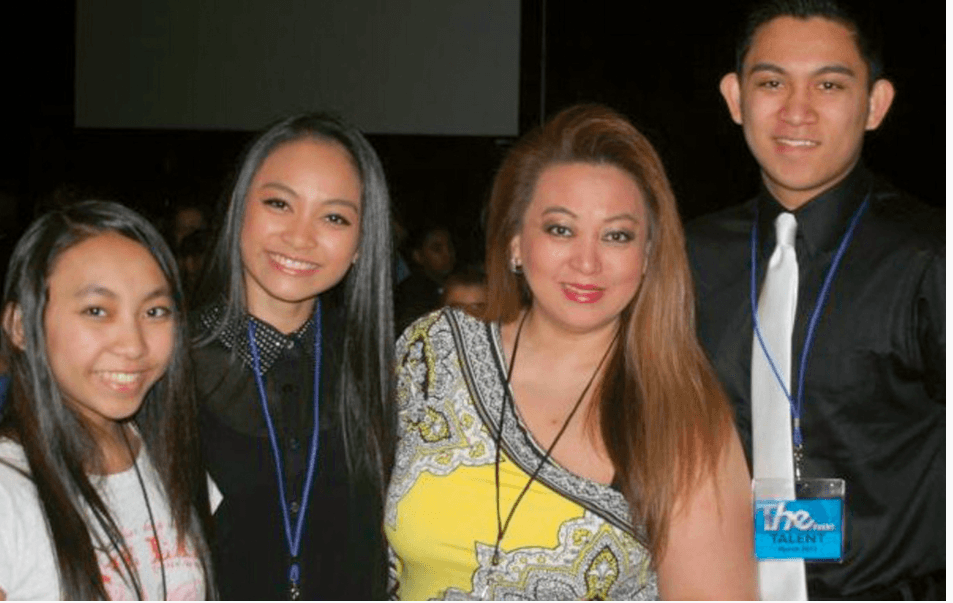 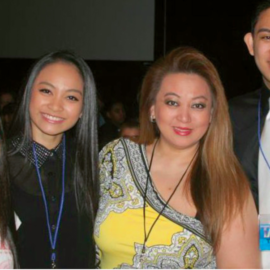 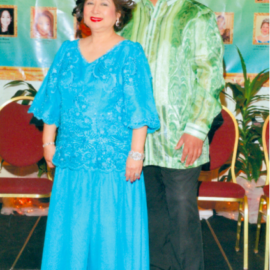 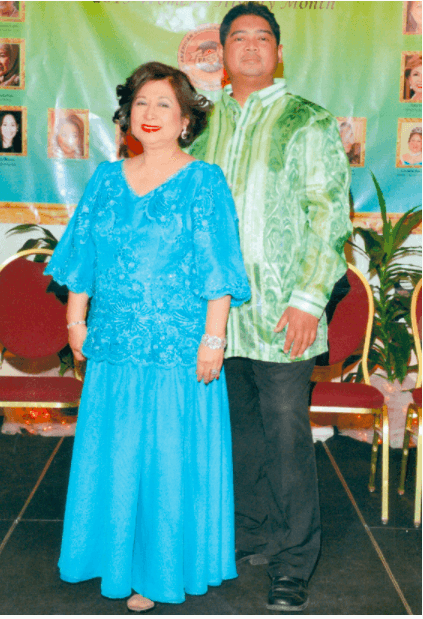 Mother and son, Linda Mayo and Joey, in a recent photo taken during PACCAL’s WHM celebration

There is something strange about the endearment and the magnetic force that attracts a child towards his mother compared to his father. The reason could be due to the biological relationship, literally from the umbilical tie that serves as a direct “line of connection” between them, having had sanguineous and mammiferous-based foundations.

Mothers, generally, are referred to as God’s most significant female creation after Eve. She is gifted with such capability to undergo childbirth, to be caring, loving, understanding, all-giving, sacrificing, selfless, forgiving, protective, and most of all, be the perfect embodiment of a human paragon of righteousness and great deeds.

And to appreciate, and recognize the unmatched greatness and unparalleled sacrifices that motherhood entails, every second Sunday of May was earmarked as a universal day of celebration in her honor. Although, it is fitting and proper to have it celebrated every minute of the day since a mother’s role is limitless and unending.

The modern day observance of Mother’s Day was initially celebrated back in 1863 when Anna Jarvis, an Appalachian homemaker, organized “Mother’s Work Day” to raise awareness of poverty and unhealthy living conditions affecting children and to address such problems, she taught of mothers to lead the advocacy.

After Anna’s death in 1905, her daughter (also named Anna), created a memorial in loving memory of her mom and started a campaign to officially institute a holiday to honor mothers. It was in a church service where the first Mother’s Day observance was celebrated through Anna’s initiative. She decorated the church with white carnations, her mom’s favorite flowers, to signify sweetness, purity, and endurance. The practice was carried out to this day, having white flowers for mothers who have died and red carnations or roses for living moms.

The enormous impact of the universal celebration of Mother’s Day, unprecedentedly, made it as the most observed holiday. It ranks close to Christmas and Thanksgiving. It was officially noted that souvenir and gift items, flowers, and greeting cards, even restaurant reservations, rake in voluminous sales during this season, proving that mothers, in any language and creed, are most recognized and honored.

In this year’s observance of mothers and motherhoods’ red-letter-day, I chose to write about two mothers who relatively play the same role in two different situations. Both are undoubtedly idealistic and dedicated to the part they have to play but fashioned in a slew of distinctive performance

To be a mother is tantamount to sacrificing almost everything one enjoys during her single-blessedness, willingly performing even the meanest task just so to uplift the living standard of her family. A mother is a woman of tremendous strength and incomparable compassion serving as the ever-reliable driving force behind every single endeavor her children pursue, uncomplaining, tireless, and constantly aggressive with every possible opportunity that benefits her children.

And to recognize the enormous sacrifices and the untiring efforts provided by a mother to build and sustain the career her children has ventured into Irene Abaya-Campos more than deserves these humble words of praise.

Aside from her daily office job and personally attending to the needs of her husband and children, Irene passionately manages the career of her three dancing kids. She closely monitors their rehearsals, assisting in the preparations for their competitions and showcases. She leaves no stone unturned just to insure that everything falls into place with no options for regrets.

“It’s not easy doing this but I have to because I love my children and want to give them the best this rare opportunity offers. It was well-worth all the hardships and sleepless nights. Their success has always been my biggest motivational factor to keep me going, sustaining strength when I’m at the verge of feebleness…constantly fueling my drive especially during times when I almost wanted to surrender,” she said.

“If only my mother is still around I’m certain she would be very proud of me. I inherited her strong fighting spirit and positive outlook in life. We’re both strongly motivated by challenges. Similarly, we’re both independent and just enjoy living the zest of life while being challenged unceasingly.”

A typical housewife and mom, if there’s another most significant side of Irene that would be her endemic culinary expertise with kitchen recipes whipped out from her own self-concocted ingredients. Her tender hands has gently raised wonderful children while simultaneously mashing, chopping, mixing, cooking, and baking mouth-watering and delectable dishes not only for them but for friends, as well.

Despite suffering from tremendous pains from her swollen knee injury brought about by the impact of a recent car accident incurred while driving home from a Connecticut dance competition, Irene still unrelentingly manages to perform what she used to do, squeezing everything between her orthopedic and therapy appointments.

This weekend, she’s up and about once again. This time, she is California-bound for another international dance competition. Aided by her cane and wheelchair, Irene fearlessly faces another emotional challenge amid her physical disability.

There seems no stopping this all-around mom from doing what she loves doing best, making her kids look the greatest in their every appearance. For aside from helping them pick the suitable outfits for their performances, Irene takes also multi-tasking roles she performs efficiently and reliably well: as nanny, driver, personal assistant, security, runner, wardrobe mistress, career planner-adviser, caterer, critic, shock-absorber, and not to miss out, make-up artist. Her unmatched aesthetic talent on make-up application is way beyond compare that could, without any doubt, give professionals and experts a run for their money.

With the tremendous amount of responsibility on her shoulders and the great expectations incessantly pressuring her while silently coping up with the limitless demands that motherhood entails, Irene could only release a deep sigh and with just the mere thought that she’s doing all these for her children more than alleviates every single pain there is… and then, she’s back on the track again.

Motherhood becomes her, what with her charming ways and compassionate disposition. Although it is indisputable that the most significant achievement of a mother is the raising of virtuously educated and sensible children, Linda Mananghaya Mayo has just got one to rear sans regret. Bearing a child is laborious but raising them up is even difficult especially so, when one becomes a single mom and Linda has impressively passed this stage not only with flying colors but with kaleidoscopic hues as well.

Her innate sense of motherhood and caring nature has invigoratingly transcended way beyond the walls of her well-manned abode. After having underwent several disheartening situations and gallantly faced seemingly endless challenges upfront, Linda came out victorious and unaffected. She was even made stronger with every battle she fought.

A quintessential exponent of an Aries-born, Linda was born to lead and administer. That makes her firmly authoritative and administratively organized but when it comes to her own personal matters she unmindfully surrenders to self-reclusion, without seeking for aid or assistance as she, sometimes, is being suffocated by her own foolish pride.

Raising her only son, Joey, forced her to give up a great deal of pleasure (and leisure) for his sake. A typical career-oriented woman who is politically inclined, Linda knows that motherhood is also a career in itself and made sure that her home is the most valuable workplace than the office with her family taking the top preference in many aspects.

Linda tends to be overprotective but that trait of hers is quite understandably acceptable since Joey, being her only son, is the sole source of her inspiration and the only person she could totally rely on when worse comes to worst. She knows what’s best for him and sometimes pampering is the only recourse she knows just to make up for anything else she fails to provide. All-giving is one of Linda’s innate natures and that extends even to her friends and colleagues.

A product of a closely-knit family from Bulacan, Linda’s wings tend to span widely across the borders and seas. But she burns the wires without minding the cost, particularly when it comes to communicating with her own mother, Erlinda Santos Mananghaya, 95. Since her mother is in her twilight years, Linda, recently, made sure to be by her side in every possible way she could. Just last November and December of 2012, Linda abandoned her pressing workload and flew home to Bulacan to personally attend to her mom’s needs. She knows that we merely live on borrowed time and hers might be recalled untimely.

Just being merely by her mom’s side made her feel like a helpless child wanting for the warmth of a mother’s caress. Feeding her mom instantly relived the past when she was being spoon-fed by the same bed-ridden woman in her arms. Her mother’s muted sighs and whispers sounded like music that used to lull her to sleep. Running her fingers on her thinning hair sent stabbing pains that Linda merely kept in silence. If she could only take her place to free her from the dismal situation slowly diminishing her strength, she would do it uncompromisingly.

She went back to America with a heavy hear, leaving behind the woman she’s deeply indebted for whatever she is today, the woman she has totally emulated all her life.

Every passing hour without a call from Linda’s family back home was a moment of relief. There were sleepless nights and restless days until Linda was awakened by an early morning call last April 23. Enveloped with fear and premonition, she checked where the call was. Seeing the call’s origin, Linda’s blood ran cold, and her whole body went numb. She knew what the call was all about. Upon hearing the sad news from her brother, she almost lost her senses. She was already prepared for it yet eviscerated by her own denial. Linda spoke in mumbling voice with drowning sighs.

Accepting reality was hard for her. Before she knew it, the phone conversation has transpired but she was kept immobile and stoic for a long period that she didn’t even notice. What pained her most was the fact that she couldn’t be home and send her off to her final journey. But her two-month stint with her gave Linda sufficient comfort to evade any form of guilt. At least, she has done her part and spent quality time with Nanay Erlinda before she finally succumbed to old age.

And during the time when her mom was buried, knowing that she’d be gone forever, she felt like a melting candle with wick tossed against the gushing wisp of cold air, like a dying ember in the midst of a bleak desert. Linda felt a huge part of her seemingly gone with her passing.

For the rest of her life, no matter how much time will pass, Linda knows that there will always be an empty space left especially reserved to fill up significant memories, until such time when she’ll be able to cope up with her mom’s loss and come to terms with reality and acceptance.

To all the mothers and women with motherly instincts, Happy Mother’s Day!

On living in Spirit

Best of both worlds: Single Fil-Am moms on managing family and business

Single moms in their multi-tasking, complicated world: The struggles and joys of doing it alone