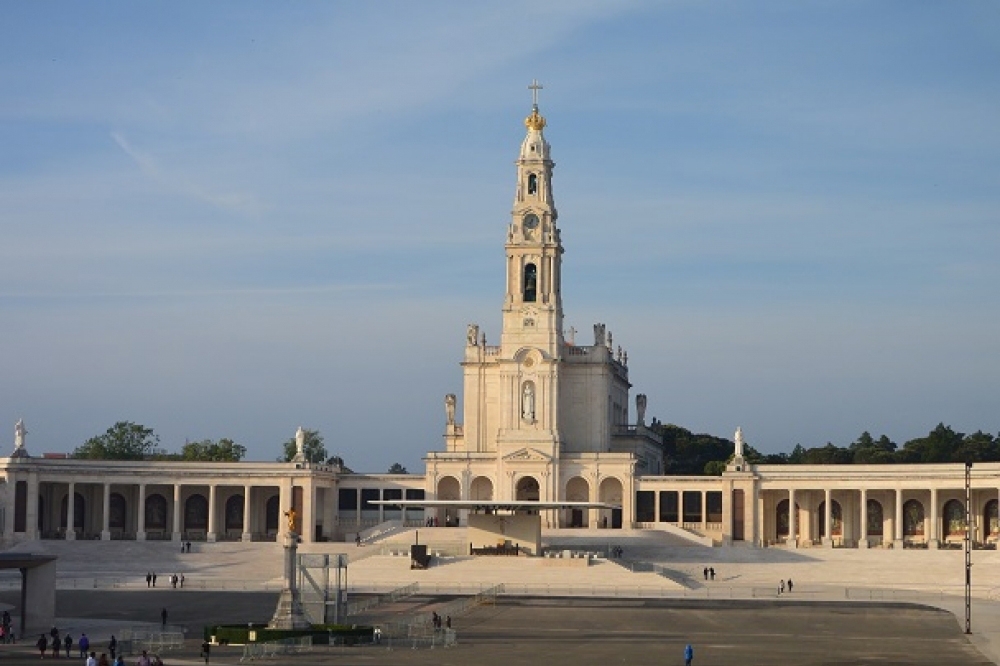 Exterior of Basilica Our Lady of the Rosary, which is a minor basilica in the Sanctuary of Fátima (Photo courtesy of Fatima Guide) 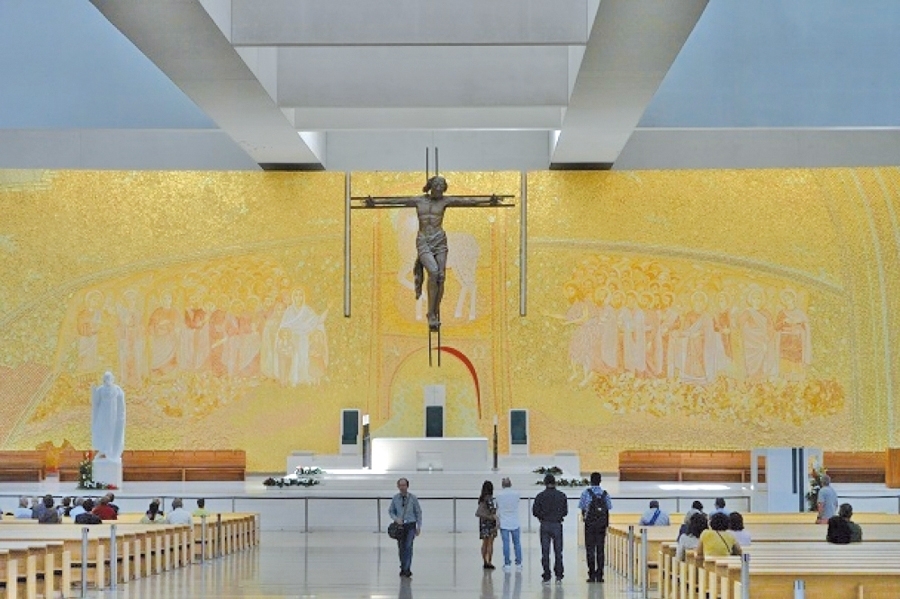 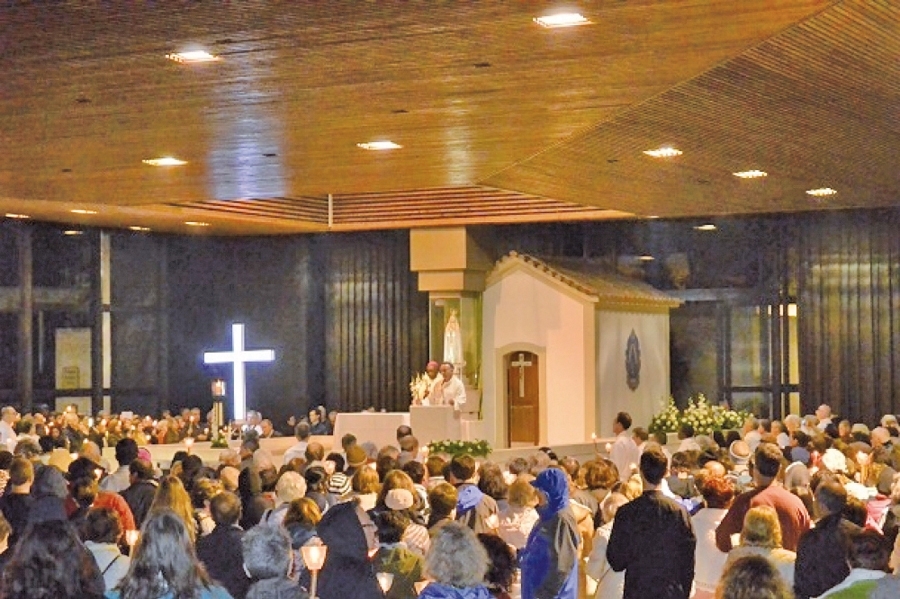 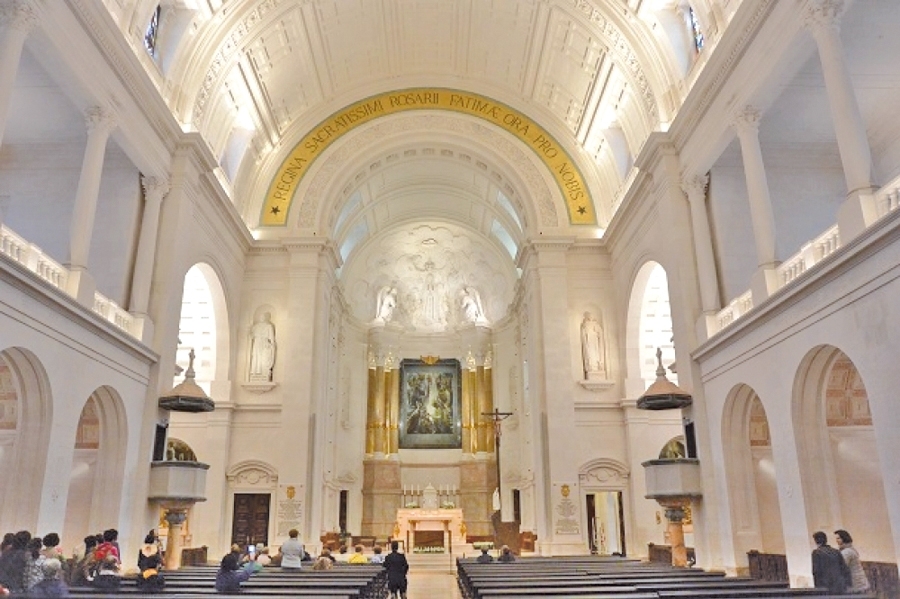 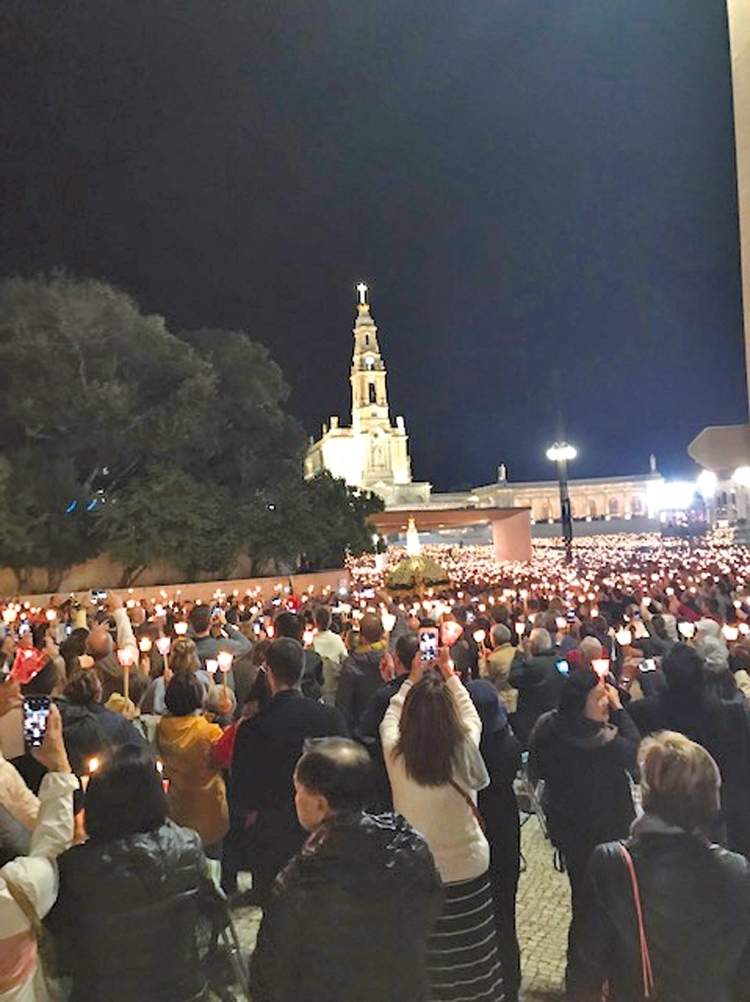 The procession takes place in the large square in between the Basilica of the Rosary Our Lady of Fátima and the Church of the Holy Trinity. Each night, hundreds of pilgrims and devotees attend. (Photo by Fr. Rodel G. Balagtas) 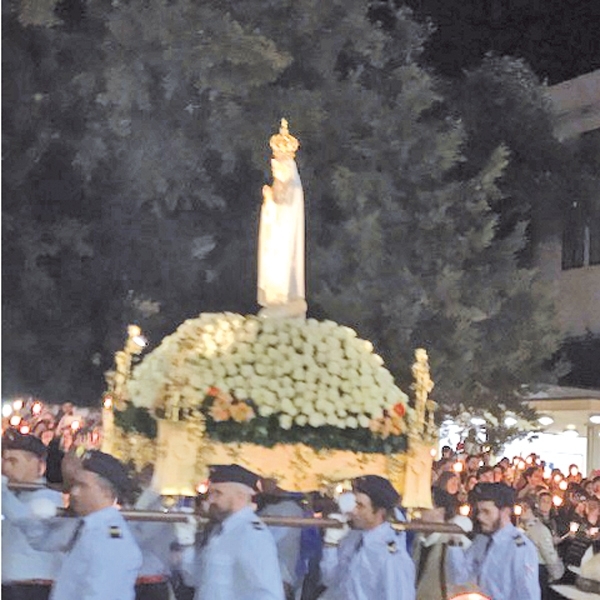 Every night around 10 p.m., the procession of our Lady of Fátima begins from the Chapel of the Apparitions after the Holy Rosary. (Photo by Fr. Rodel G. Balagtas) 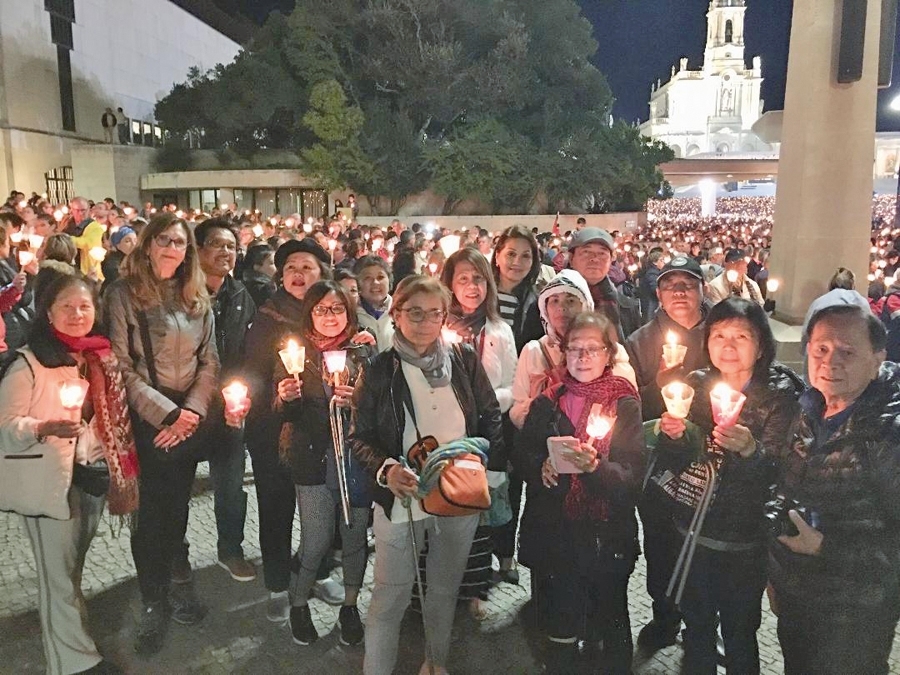 Filipinos from the U.S. joined a pilgrimage in October 2018, which included a stop to Fátima, Portugal. (Photo by Fr. Rodel G. Balagtas) 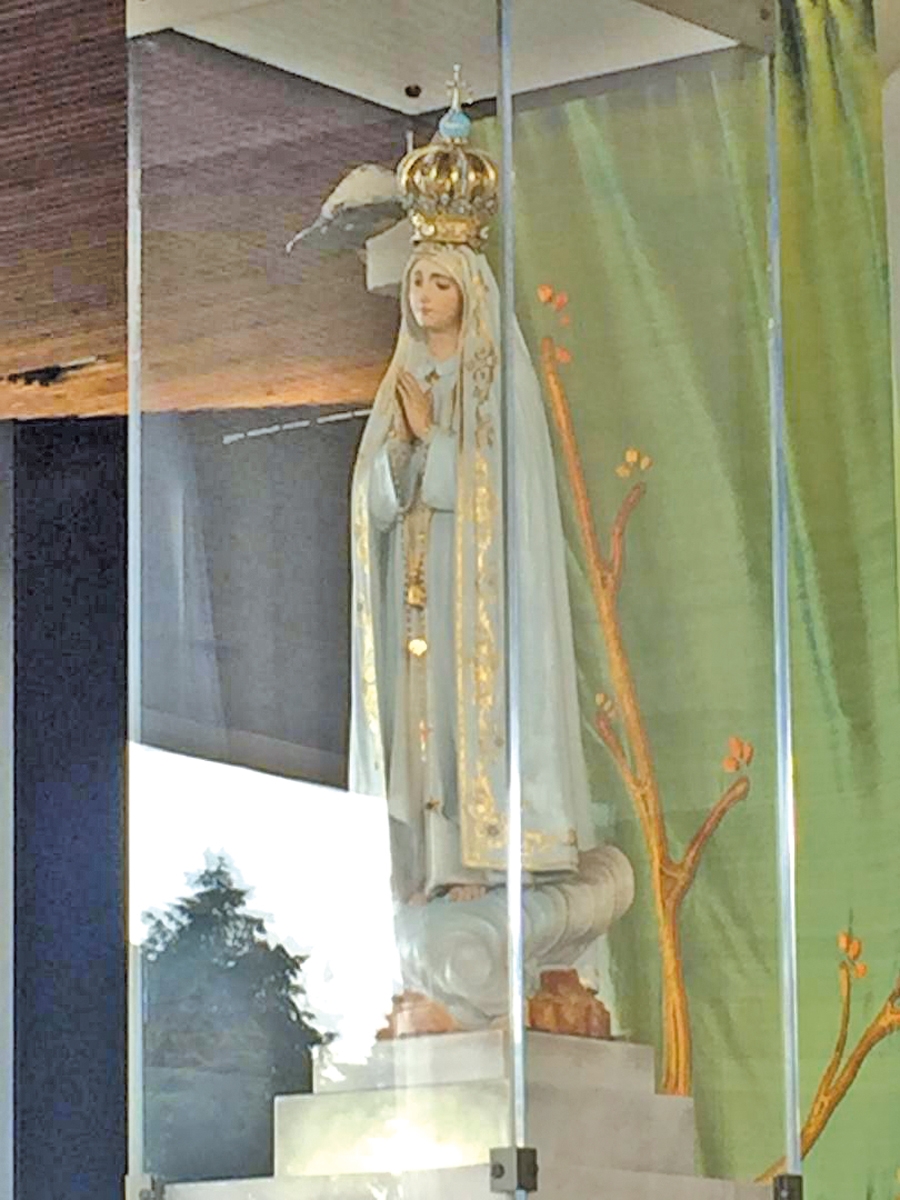 The canonically-crowned image of Our Lady of Fátima enshrined within the Chapel of the Apparitions (Photo by Fr. Rodel G. Balagtas) 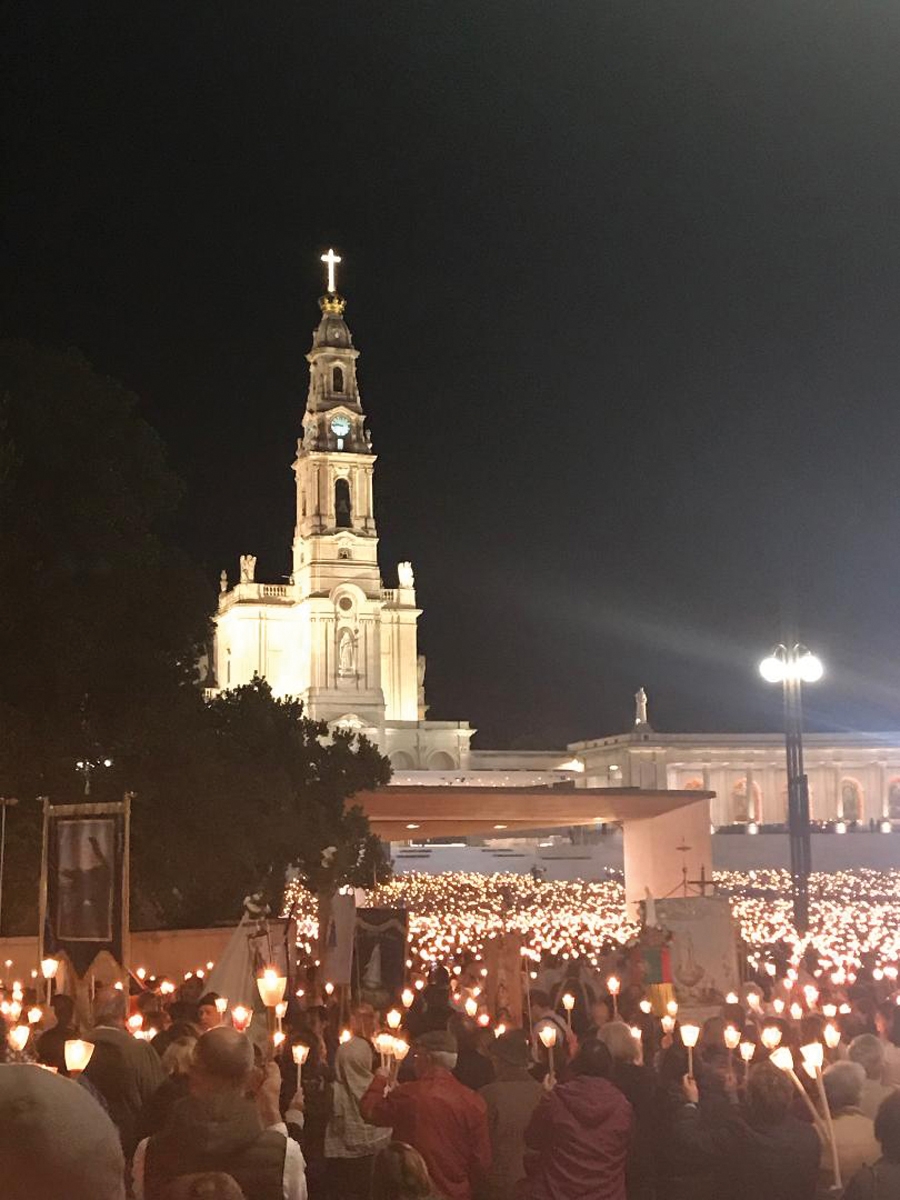 Candlelight procession and rosary at the Sanctuary of Our Lady of Fátima in Portugal. (Photo by Fr. Rodel G. Balagtas)

MANY of us came to know about the Blessed Virgin Mary’s apparitions and messages in Fátima, Portugal through reading and hearing about them or by going on a Marian pilgrimage.

We learned about the Miracle of the Sun on October 13, 1917, when more than 30,000 people witnessed the sun danced, zig-zagged, and careened towards the earth, drying their clothes and the mud they stood on after the rain.

For many years some people in the church, government, and scientific field were skeptical about these apparitions and miracle. However, in 1930, after a thorough investigation, the Catholic Church officially declared their authenticity.  In the years that followed, even until now, Catholics and non-Catholics alike, would visit Fatima to witness its great Marian devotion and to experience spiritual renewal.

In October last year during my sabbatical, I had the privilege of leading a group of 22 pilgrims to Fátima. Although it was my third time to visit this place, the pilgrimage did not fail to renew my Marian piety. The multitude of people that participated in the nightly candle procession and the outdoor Masses invigorated my Catholic faith once again.

The Sanctuary of Our Lady of Fátima is the fourth biggest Catholic pilgrimage site in the world. It includes the Chapel of Apparitions, which the church leaders built in 1919 on the exact spot of the apparitions; the Basilica of Our Lady of the Rosary of Fátima, where the tombs of Jacinta and Francisco (1951 and 1952) are situated; and the Basilica of the Holy Trinity, initially constructed in 2014 and completed three years later with a sitting capacity of 8,633. Nearby are the three shepherd houses—the houses of Francisca, Jacinta, and Lucia.

The messages of Mary in Fátima are about conversion, repentance, and vigilance. They speak of the frightening vision of hell, devotion to the Immaculate Heart of Mary, Second World War, and prediction of the immense damage that Russia would do to humanity by abandoning the Christian faith and embracing Communist totalitarianism.

The “third part of the secret” of Fátima is a prophetic vision of “the Bishop clothed in white,” whom the three shepherd children thought as the Holy Father. In 2000, Sister Lucia described it in a secret letter entrusted to the Church for long years: “Other Bishops. Priests, men, and women Religious going up a steep mountain, at the top of which there was a big Cross of rough-hewn trunks as of a cork-tree with the bark; before reaching there the Holy Father passed through a big city half in ruins and half trembling with halting step, afflicted with pain and sorrow, he prayed for the souls of the corpses he met on his way; having reached the top of the mountain, on his knees at the foot of the big Cross he was killed by a group of soldiers who fired bullets and arrows at him, and in the same way there died one after another the other Bishops, Priests, men and women Religious, an various lay people of different ranks and positions.”

The church has claimed that this prophetic vision became real in the assassination of Pope John Paul II on May 13, 1981. In the announcement that Cardinal Angelo Sodano made, he stated that “it appeared that it was ‘a mother’s hand that guided the bullet’s path,’ enabling “the Pope in his throes” to halt “at the threshold of death.” (Pope John Paul II gave  the bullet which had remained in the jeep to the then Bishop of Leira-Fatima. It is now set on the crown of the statue of Our Lady of Fatima in the Chapel of Apparitions.)

Responding to Mary’s messages in Fátima, John Paul II prayed with the crowd at St. Peter’s Square in 1984 in the following words, entrusting all people to the Immaculate Heart of Mary:

“O Mother of all men and women, and all peoples, you who know all their sufferings and their hopes, you who have a mother’s awareness of all the struggles between good and evil, between light and darkness, which afflict the modern world, accept the cry which we, moved by the Holy Spirit, address directly to your Heart. Embrace with the love of the Mother and Handmaid of the Lord, this human world of ours, which we entrust and consecrate to you, for we are full of concern for the earthly and eternal destiny of individuals and peoples.

From famine and war, deliver us.

From nuclear war, from incalculable self-destruction, from every kind of war, deliver us.

From sins against life of man from its very beginning, deliver us.

From hatred and the demeaning of the dignity of the children of God, deliver us.

From every kind of injustice in the life of society, both national and international, deliver us.

From readiness to trample on the commandment of God, deliver us.

From attempts to stifle in human hearts the very truths of God, deliver us.

From the loss of awareness of good and evil, deliver us.

From sins against the Holy Spirit, deliver us.

Help us with the power of the Holy Spirit to conquer all sin: individual sin and the ‘sin of the world,’ sin in all its manifestations.

Let there be revealed, once more, in the history of the world the infinite saving power of the Redemption; the power of merciful Love! May it put a stop to evil! May it transform consciences! May your Immaculate Heart reveal for all the light of Hope!”

John Paul II’s prayer of consecration to the Immaculate Heart of Mary reverberates today especially in our world that keeps experiencing terrorism, the threat of nuclear war, famine, poverty, lack of regard for human life, corruption, greed, and attacks on Christian faith and morals.

It is a fitting prayer in the present context of the Philippine society, church, and politics that show divisions, disrespect, and hatred among leaders and citizens; lack of care for children; destruction of human life, injustice, corruption, and moral decay.

Once more, let’s revisit the messages of Mary in Fátima. Let’s heed to her call for conversion and penance. Let’s consecrate our country and  the world to the Immaculate Heart of Mary and ask for her powerful intercession. Mary Immaculate, pray for our deliverance from all evils!

(Reference: “The Message of Fatima” by the Congregation For the Doctrine of the Faith,www.vatican.va/roman_curia/congregation)

From a Filipino immigrant family, Reverend Rodel G. Balagtas was ordained to the priesthood from St. John’s Seminary in 1991. He served as Associate Pastor at St. Augustine, Culver City (1991-1993); St. Martha, Valinda (1993-1999); and St. Joseph the Worker, Canoga Park (1991-2001). In 2001, he served as Administrator Pro Tem of St. John Neumann in Santa Maria, CA, until his appointment as pastor of Immaculate Heart of Mary, Los Angeles, in 2002, which lasted 12 years. His term as Associate Director of Pastoral Field Education at St. John’s Seminary began in July 2014.

Can you be sued for old debts you haven’t paid?