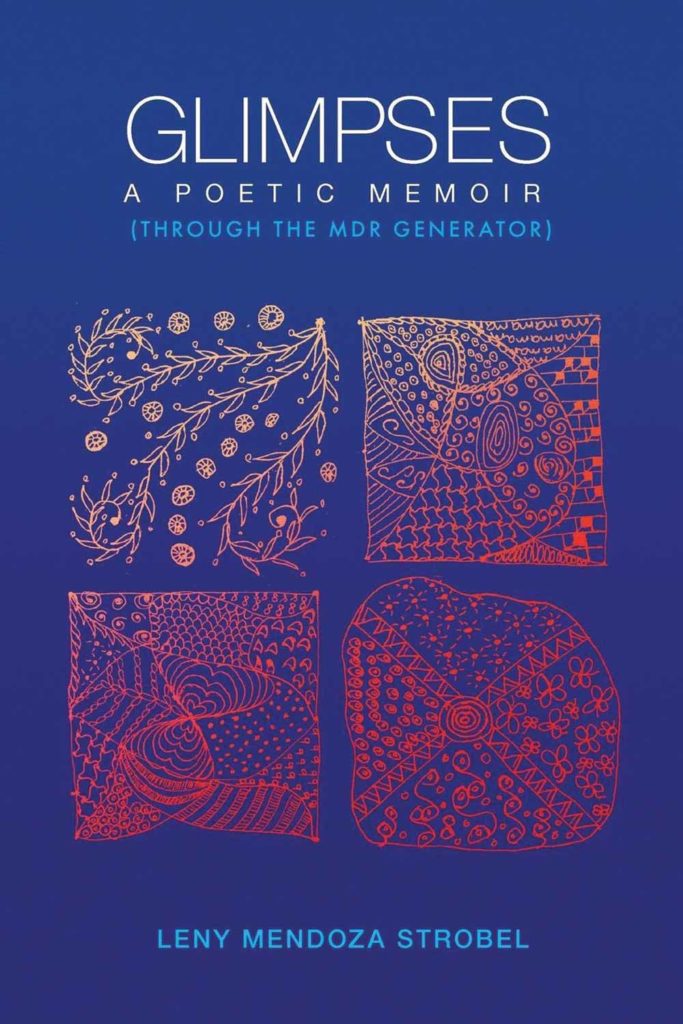 IF you have walked the Camino de Santiago, you will come across acres and acres of wheatfields. The wheatfields have no shade and you will see colors of yellow-brown as far as the eyes can see on the horizon. They are called mesetas or plateaus found in the high plains of central Spain. You will also find irrigation dams constructed, of course descending columns of water to irrigate these wheatfields.

The pages in Leny Mendoza Strobel’s memoir, “Glimpses: A Poetic Memoir (Through the MDR Generator),” struck me as this plateau of wheatfields. Read the pages, and embedded are nuggets of her observations, experiences and reflections. The memoirs are easy to read, a page at night gets you to discover what she has gone through in her childhood, but not replete with detail, it leaves you to imagine what is embedded in those wheatfields, or when she describes a camping trip, she hints at the joy she gets in moving freely in a dance.

Perhaps the weblike designs of lace-liked motifs on the book cover hint at what you will find as a reader. At times, it reminds you a lot of Mother Nature and its offerings, the garden crops she nurtures, or simply what she likes to reflect on daily as she journals.

I met Dr. Leny Strobel during a writing workshop organized by Mike Gonzalez and a second time in her house with her husband, Cal. I was so impressed that she was already a practicing vegetarian before the organic movement got popularized in the last decade. She prepared a four-course meal using produce from her garden, all certifiably organically grown in her gardens. I could not forget that evening as I had too many vegetables, and enjoyed her cooking so much that the toilet and I became best friends temporarily. I admired her tenacity even then as it took her quite a while to prepare all the entrees by herself.

Should that be our lives — marked by self-reliance, but also connecting in conversation with her husband and a group of friends?

“If you are confused, you must be thinking clearly,” said Fr. Ed de la Torre many decades ago in a lecture in a conference in the U.S. This saying comes to mind as I read Strobel’s memoir, published in 2019, and at the same time, it appeared to be simulating an endless movement of a dance.

If your mind is attuned to how a book is formed, aggregating information and words around a theme for each chapter, there is no such thing in this book.

It is unlike a book, though presented as a paperback of 112 pages. It is a compilation of journal entries containing her feelings, her thoughts and her journey back to the past and her hopeful gaze to the future.

The book feels like going through a field of wildflowers, at times sensual, few times cerebral. More often, the pages contain her musings of philosophy, observations about the world, and healing from a past trauma of sexual assault. It is also a reconnection to what her childhood was — to what was “indigenous,” something organic within her, before her words of Tagalog and Kapampangan succumbed to the use of a language, English, once foreign to her and now, a medium of creative self-expression for this book. While she considers English as a medium for colonization, it is also through English that she liberates her colonial mind to create this book.

You sense a sustained critical tension embedded in Strobel’s pages, questioning and then sometimes having the answers and then to question again what she came around to discovering until perhaps her mind gets exhausted, or simply stops at a page for the night?

It is amusing to see the thoughts on each page, discussing for example on page 37, if in fact, the Luna brothers – Antonio and Juan – are siblings of her great grandfather, Joaquin? Why does she want this linkage, one might ask?

Antonio was a well-known historical figure who fought for Philippine Independence while his brother Juan was a talented artist who painted the ceiling to floor sized painting called Spoliarium. “In a fit of jealousy Juan murdered his wife and mother-in-law but was acquitted on account of insanity. He was deported to Hongkong and lived in exile,” Strobel wrote.

Her great grandfather, “Joaquin was La Union’s Governor, worked for a tobacco monopoly, a violinist and who was sent to the 1904 St. Louis World’s Fair to represent the government.” She asks the question: “How did these brothers become infamous? How did their descendants squander their legacy of greatness?” That form of questioning is really passing judgment on the lives of these descendants that a historian must dig some archives to respond to her conclusion. Did the Luna descendants squander their legacy?

Why is there a National Historical Museum of Juan and Antonio Luna in Badoc, Ilocos Norte with six galleries displaying paintings, artifacts including describing Antonio as a man of science, as he was a chemist? It traces the history of being an artist on the part of Juan Luna, including his commissioned works and where Juan’s words were captured: “Genius has no country’ genius bursts forth everywhere: genius is, like light and air, patrimony of all.” The Museum is a middle-class bahay na tisa, that was completely damaged by fire in 1861 and the Luna house was ceded to the government in 1954, and the house was rebuilt by the National Historical Institute and opened its doors in 1977.

We visited that multimedia museum, replete with the uniform worn by Antonio, a video clip of their respective histories and of course, if one visits the National Museum of the Philippines, the Spoliarium painting is on display. One may argue that the descendants actually preserved their ancestors’ legacy with the help of the government.

Strobel has fused prose and poetry and in 112 pages, there is a structure of keeping each page distinct from one another. There is no binding theme that one might expect from a book, suspend that idea for a bit, and work with the author. Engage each page as she wrote and soon, you get to appreciate she had you in mind that perhaps each night, after work or school, you just have the stamina to be amused by reading just one page.

I read the book over a period of time, and dog-eared pages: 22 for her description on Filipinos’ musicality and then her recollection of a Filipino choir in the south of France; and 26 for the audacity of cruelty and the violent American culture. She proceeds to offer root causes for this violent culture to perhaps disconnection and isolation, loneliness, fear, shame and anger. She then states that “by the time cruelty becomes audacious there’s already a culture that made that possible.”

The natural question on the reader’s mind: Did this author experience cruelty? Has she healed from it or is she still suffering racial micro-aggressions? On that page, she distances herself from the cruel person and then, from that distant vantage point, she asks a question, “if one acknowledges the problem of being cruel, will that perspective offer the possibility of change? Will they automatically change?”

Then, the zinger page describing her becoming a silent witness to the 25 women who claimed in that circle they have been molested, raped, abused and betrayed by men in the community, by men who are leaders, men who are protected by other women, and men who are damaged.

I sometimes cringe at the conclusions that I find on each page, looking for evidence and proof and at times, wanting the memoirs to be coherent the way I am accustomed to reading a book. But, a light bulb switched on inside me and I decide to simply move along as if water was coming down the irrigation dams and appreciate what she has for us at every page.

M. Evelina Galang, the author of “Lolas’ House: Filipino Women Living with War,” wrote: “In her innovative memoir (through the MDR generator), Strobel “reveals connections that run deep in our collective memories in a collage of personal narratives….Strobel assembles a complex montage of a woman’s life, fully lived. This inventive form challenges conventional approaches to memoir writing as it is born of a collaborative act that is at once as courageous and vulnerable as it is inventive and beautiful.”

To me, Strobel succeeded in making me imagine some more, in making me do some more research, in wanting to mine data and facts to support her conclusions.

In that regard, her memoir — with lacelike stencils of four cover design layouts, though unusual — has literary value. Notice I critiqued Strobel’s formed conclusions on her journal entries, yet, here I am, passing the same judgment about her book of memoirs. Isn’t that what a writer would do in reviewing a book?

Prosy Abarquez-Delacruz, J.D. is a writer, after having retired from a 27-year public service at a state health agency.  She served as LA Civil Service Commissioner, appointed by Mayor Antonio Villaraigosa, as part of a five-member board.  She supports the slow food movement and buys organic produce at Los Angeles Farmers Market.  Her essays have been published in the Los Angeles Times, Philippine News, Taliba and Amerasia Journal. She wrote this in 2007 and has updated it in 2019. She has been writing for the Asian Journal for 11 years now and occasionally contributes to Balikbayan Magazine. She authored her first book, “Even the Rainbow Has a Body,” an anthology of 31 distinct artistic legacies of Filipino, Filipino-Americans and Italian Americans.

Prosy Abarquez-Delacruz, J.D. writes a weekly column for Asian Journal, called “Rhizomes.” She has been writing for AJ Press for 13 years. She also contributes to Balikbayan Magazine. Her training and experiences are in science, food technology, law and community volunteerism for 4 decades. She holds a B.S. degree from the University of the Philippines, a law degree from Whittier College School of Law in California and a certificate on 21st Century Leadership from Harvard’s Kennedy School of Government. She has been a participant in NVM Writing Workshops taught by Prof. Peter Bacho for 4 years and Prof. Russell Leong. She has travelled to France, Holland, Belgium, Japan, Costa Rica, Mexico and over 22 national parks in the US, in her pursuit of love for nature and the arts.