THE Philippine Consulate General in New York announced on Monday, Aug. 16 the resumption this year of Filipino Restaurant Week, one of its flagship projects that started in 2015. 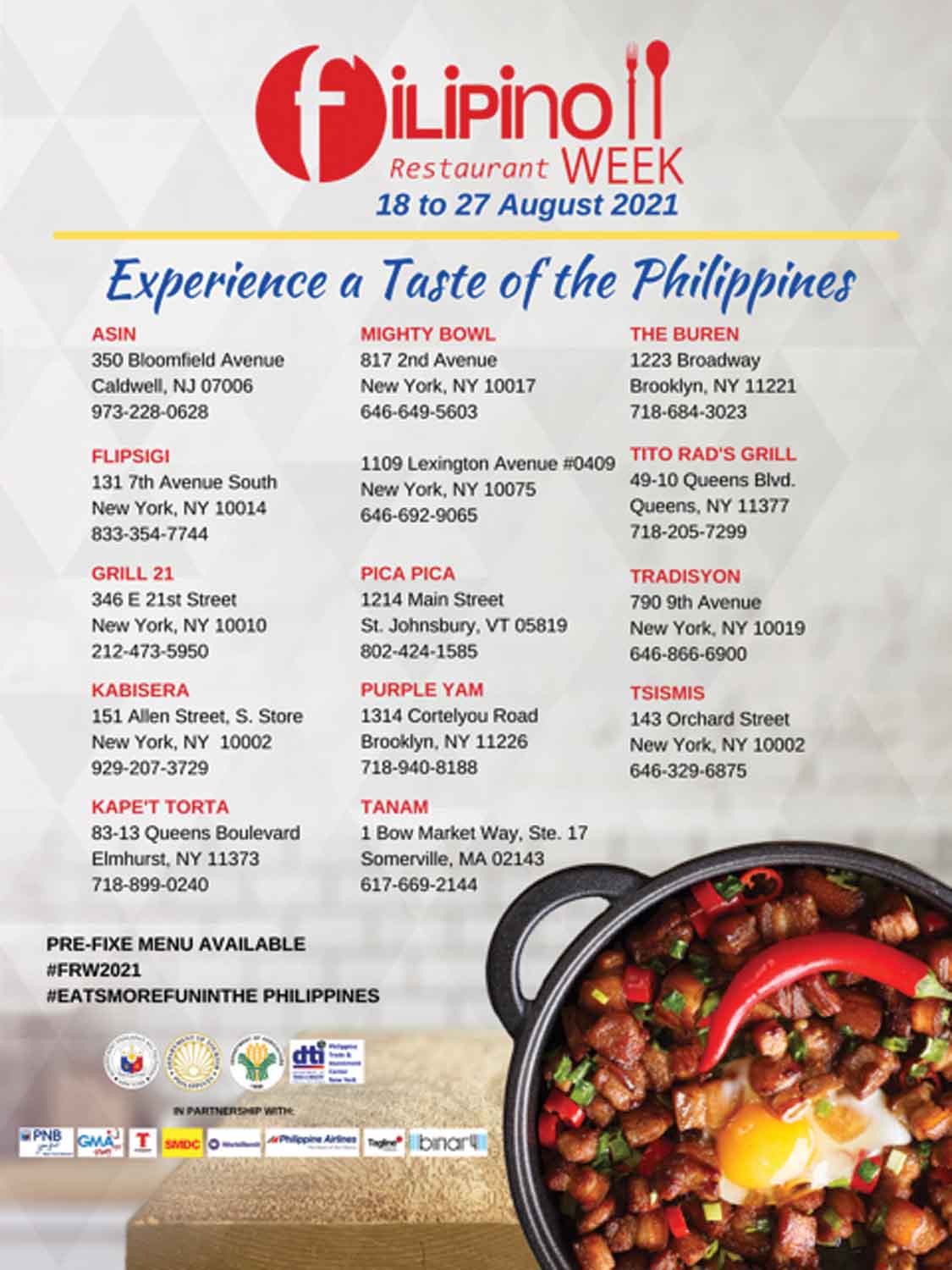 Eight of this year’s participating restaurants joined the launch at the Philippine Center. Among them were Asin, Grill 21, Kape’t Torta, Purple Yam. Tradisyon, The Buren, Tito Rad’s and Tsismis NYC. Also participating are Flip Sigi, Kabisera, Mighty Bowl, Pica Pica in Vermont, and Tanam in Massachusetts.

Consul General Elmer G. Cato described FRW, slated to happen from August 18 to 27, as a much-awaited culinary event in the community.

“Filipino Restaurant Week focuses the spotlight on Filipino restaurants as an essential way to which the public could discover and enjoy Filipino cuisine,” ConGen Cato said. “Like the New York Restaurant Week, the participating restaurants will serve set meals of at least three courses, appetizer, entree and dessert.”

This year’s participating restaurants are given the flexibility to come up with innovative menus for lunch and dinner, including whether to include drinks in the price or offer the set meals good for two persons.

For this year’s restaurant week, the featured ingredient is calamansi, the Philippine lime or lemon, which has emerged as one of the most notable exports from the Philippines.

“The 13 restaurants onboard and are excited to continue highlighting various culinary offerings that feature calamansi and other flavors of the Philippines. These offerings will range from traditional and homestyle to cutting edge fusion,” ConGen Cato added.

At the food tasting reception, guests and members of the media were able to sample some of the dishes the chefs made highlighting the calamansi.

Asin owner and chef Queenie Banez is going all out, and created dishes like crispy fish fillet with calamansi and mango salsa, calamansi cooler and calamansi cheesecake. The Buren is offering pork steak, kilawin, honey calamansi `wings and calamansi bar while Tradisyon has its famous adobo bowl with a choice of white, brown, quinoa or garlic fried rice along with calamansi tart for dessert created by their partner Whisk.

“This is our fourth year participating in Filipino Restaurant Week. It’s a very special time, very special part of the year where we all get together,” said Jappy Afzelius of Tsismis NYC. “I seldom see my friends now, because we’re always busy working at our, our separate restaurants so it’s nice to see some familiar faces.”

Most of the restaurants closed last year, some up to four months, and another couple of months this year. Purple Yam’s Romy Dorotan said he is looking forward to a more well-attended FRW this year. He also mentioned receiving government subsidies along with GoFundMe contributions.

“So, we are still there and trying very hard to be there for more years,” Dorotan said.

The restaurateurs also lamented that ingredient cost continues to rise, particularly the goods coming from Asia.

Most of them tied up with delivery apps like DoorDash, UberEats and GrubHub to widen their reach and market.

Rose Teves of Grill 21 went beyond the food delivery apps by calling their loyal customers outside the delivery areas if they wanted to order food. They then cooked the dishes before closing and Teves herself would drive and deliver the orders personally.

“For us, we didn’t feel what it was like pre-pandemic because we opened the day before the lockdown,” Chanco shared, adding that being a fast-casual restaurant helped because they were quick to pivot to pick up and delivery modes.

Being neighborhood restaurants also helped them survive the pandemic. Chanco mentioned getting the feels every time non-Filipino return customers would order kare-kare and eat it with bagoong.

“There’s not really a big Filipino population in the Bushwick area but we’ve been surviving,” said Lorraine Reyes of The Buren. “Our white customers really love adobo and tapsilog.”

If the pandemic story of Kape’t Torta is turned into an episode of the Filipino TV show Maalaala Mo Kaya, its title would definitely be “ube pandesal.”

The cafe opened in Queens in late 2019. It was a little slow then but when they introduced their ube pandesal, sales began to pick up. They got sold out quickly so they announced to their clients to order first to make sure that they don’t turn up empty-handed when they go to Queens.

Then the pandemic happened and they closed but upon reopening, the customers returned as well.

“So that was the only item that helped us through the pandemic, that we were able to survive, it’s ube pandesal. It’s the Filipinos’ love for ube that really helped us a lot,” said Nora Galleros, one of the cafe’s co-owners.

The consul general also announced the new and exclusive website, Facebook and Instagram accounts for the Filipina reference fleet, where the public can check out Filipino Restaurant Week participating restaurants, and what they offer.

This platform will also serve as the repository of photos, videos and stories about Filipino cuisine for both the Philippine Consulate General and the Filipino community here in the Northeastern seaboard.

“This afternoon also jumpstarts the food diplomacy efforts of the Philippine Consulate General, which will include a sequel in the latter part of the year where we will highlight Filipino street food and drinks in a food festival called “Inuman at Pulutan,” Cato shared.

Diners are encouraged to visit at least three participating restaurants, take photos and post them on their respective social media accounts to get a chance to win a round trip ticket to the Philippines.

The consulate is asking participants to use the hashtags #FRW2021 #EatsMoreFunInThePhilippines so their posts or entries may be counted.