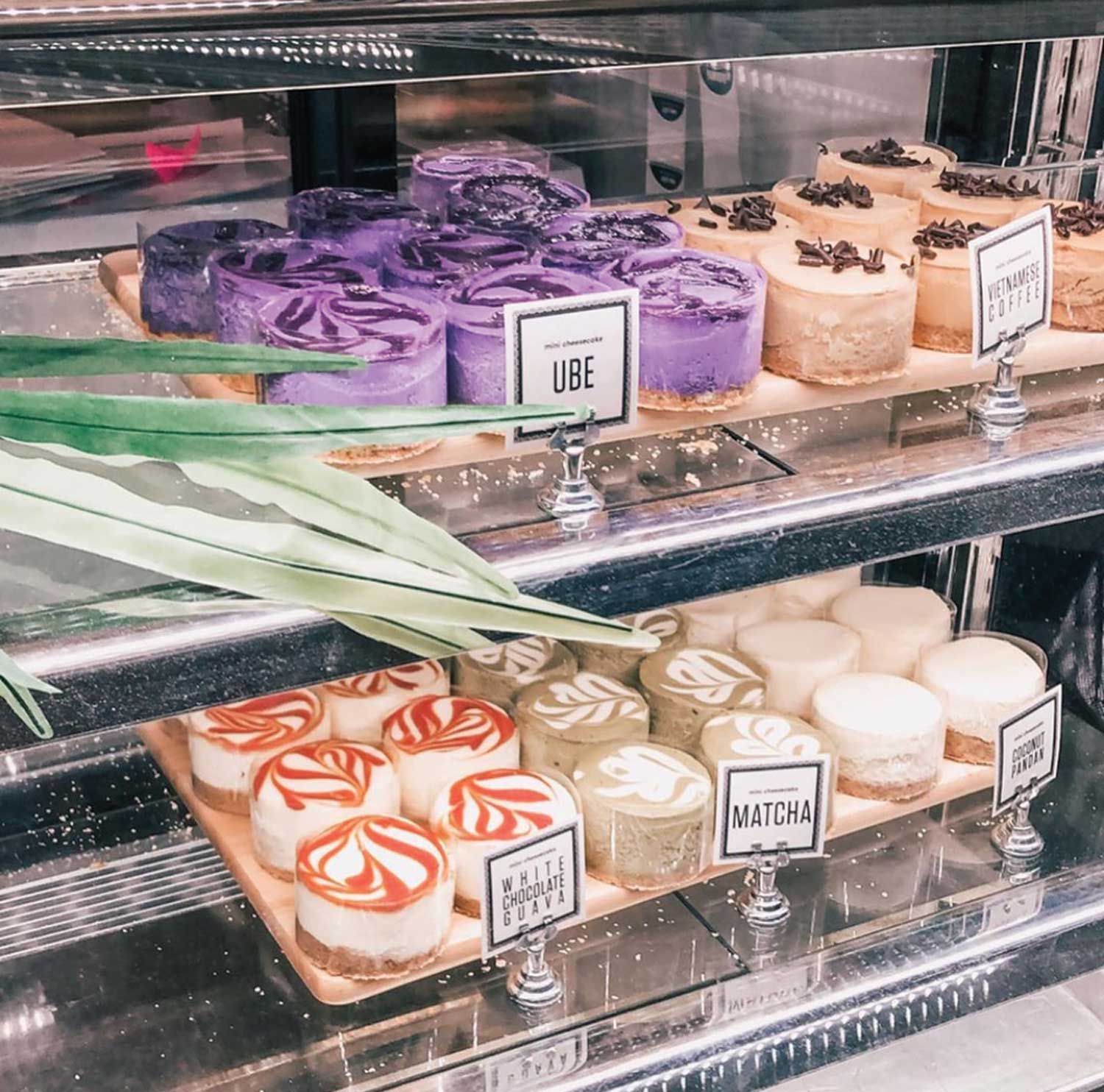 The famous cheesecakes of Hood Famous in Seattle. 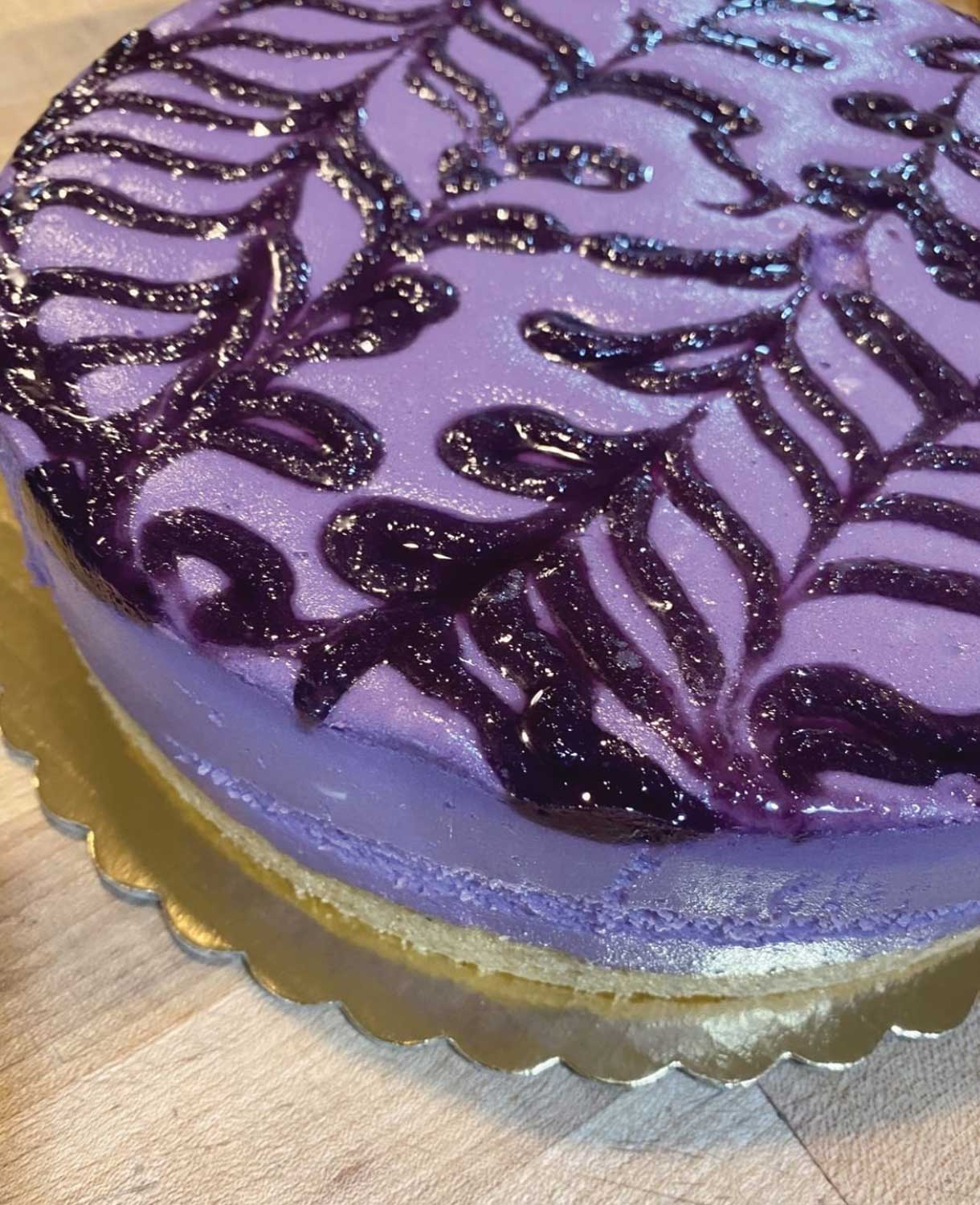 The star and most famous among Hood Famous’ cheesecakes: ube. Photo courtesy of Instagram/@hoodfamousbakeshop 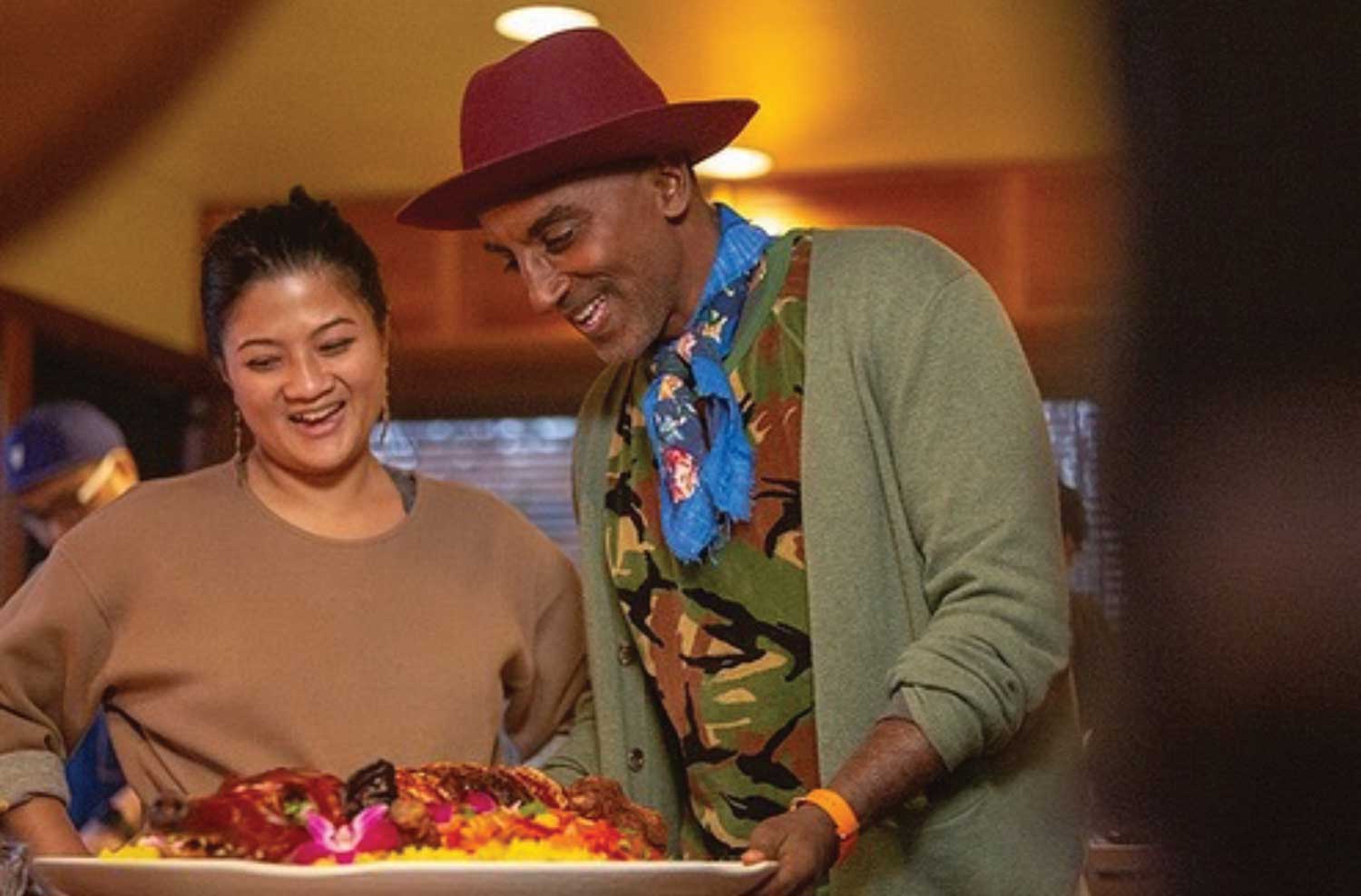 Chera Amlag of Hood Famous with Chef Marcus Samuelsson in a scene from PBS’ No Passport Required which featured the burgeoning Filipino food scene in Seattle. 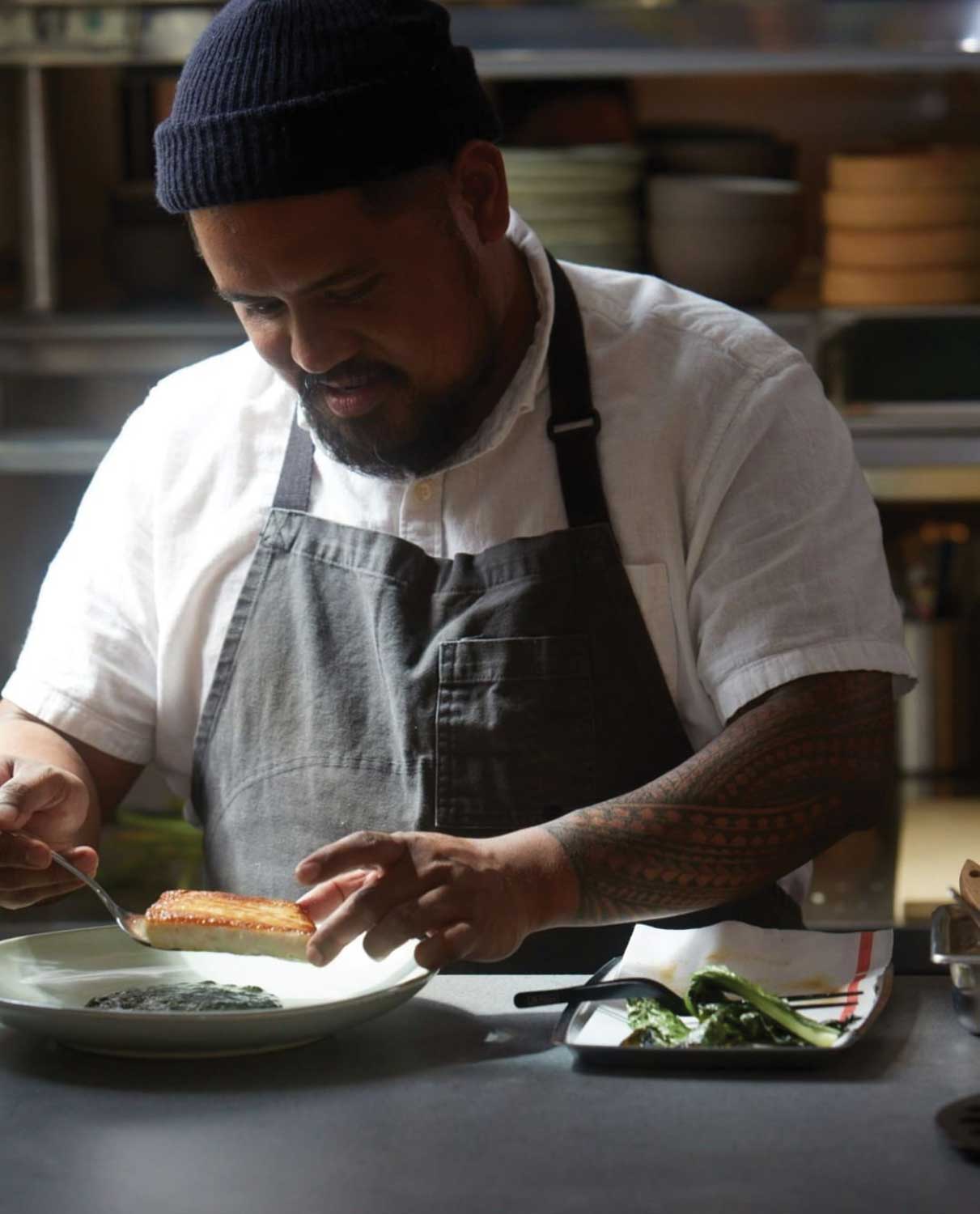 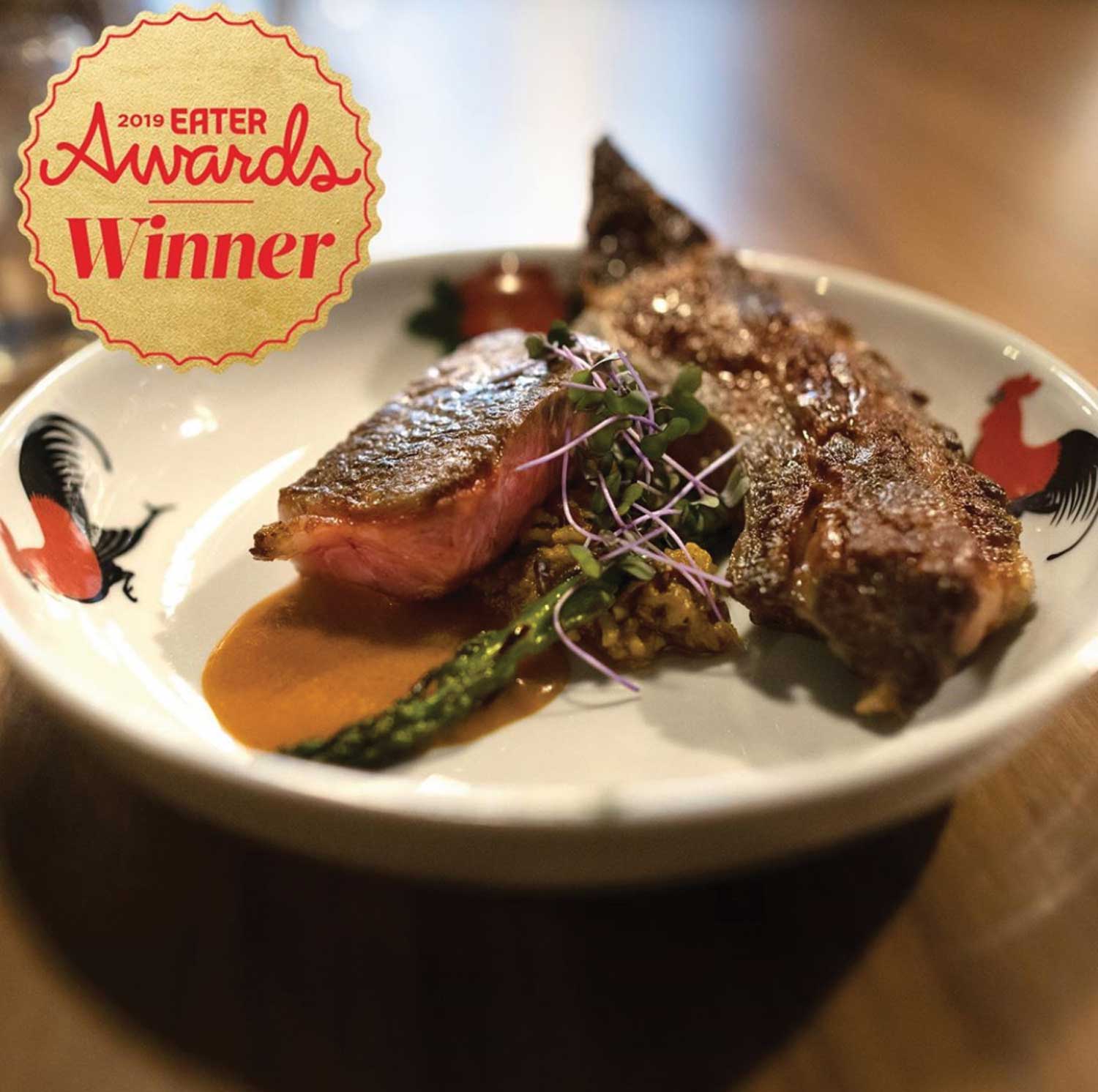 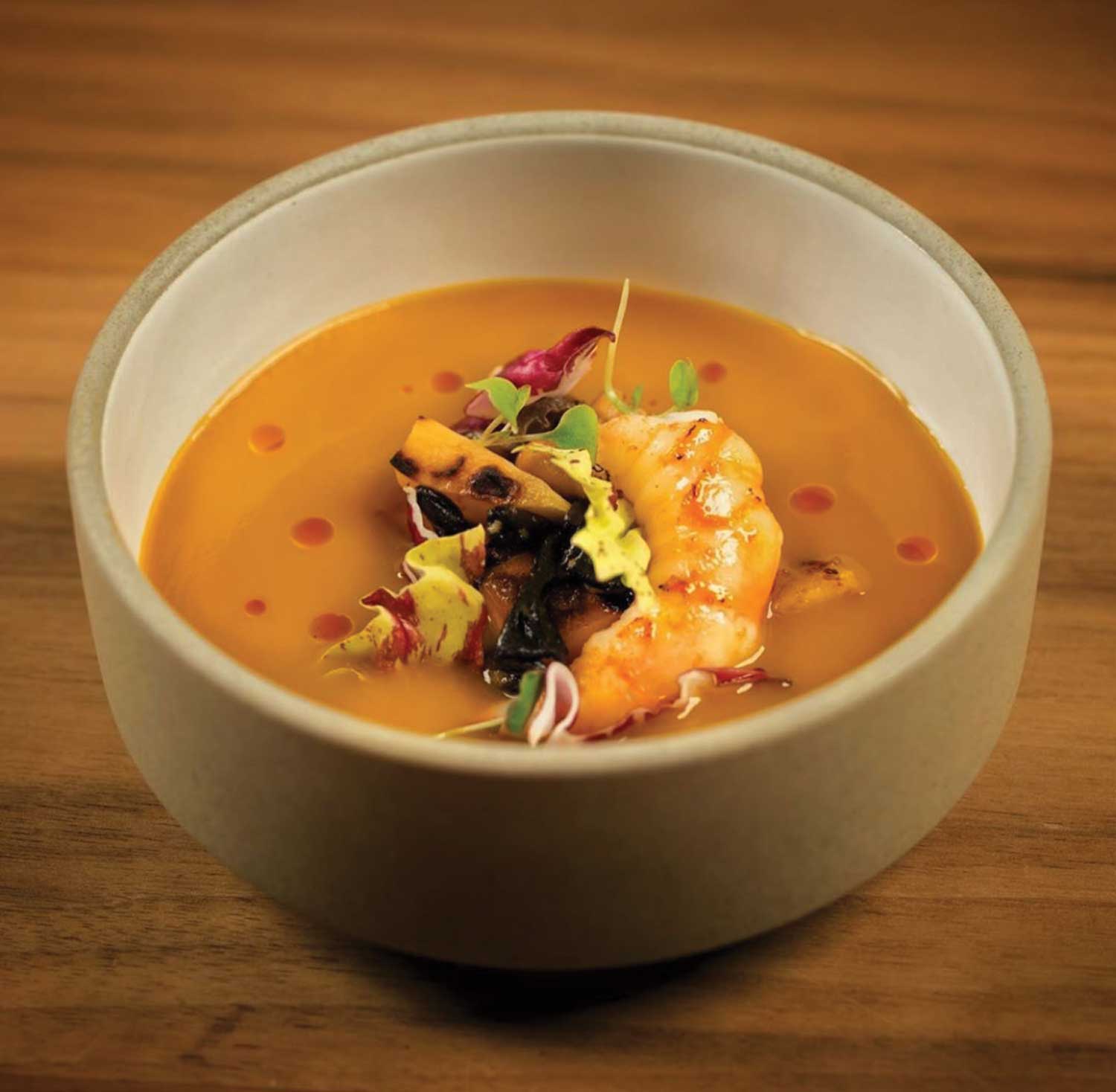 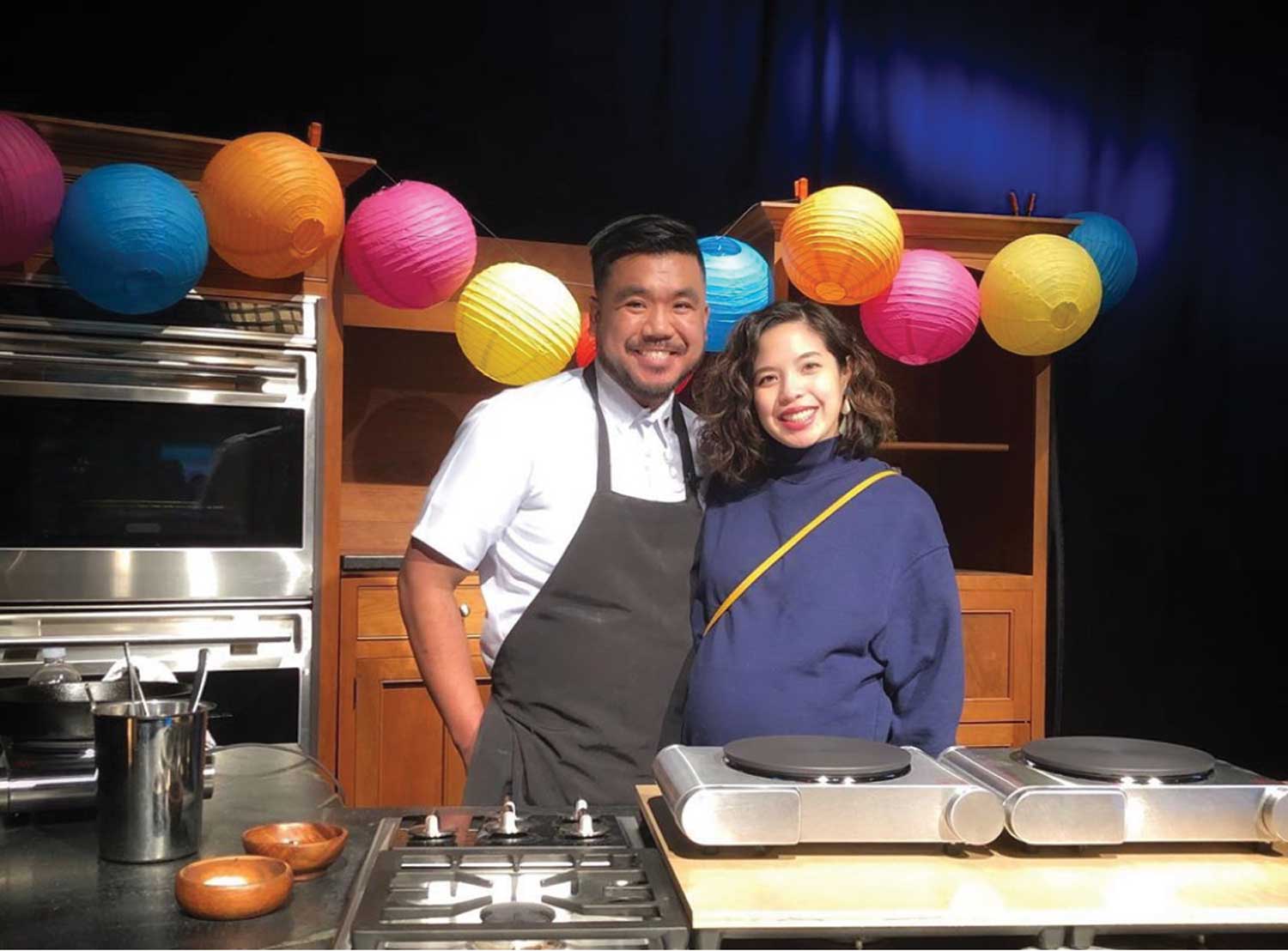 Chef Aaron Verzosa and Amber Manuguid of Archipelago in Seattle. 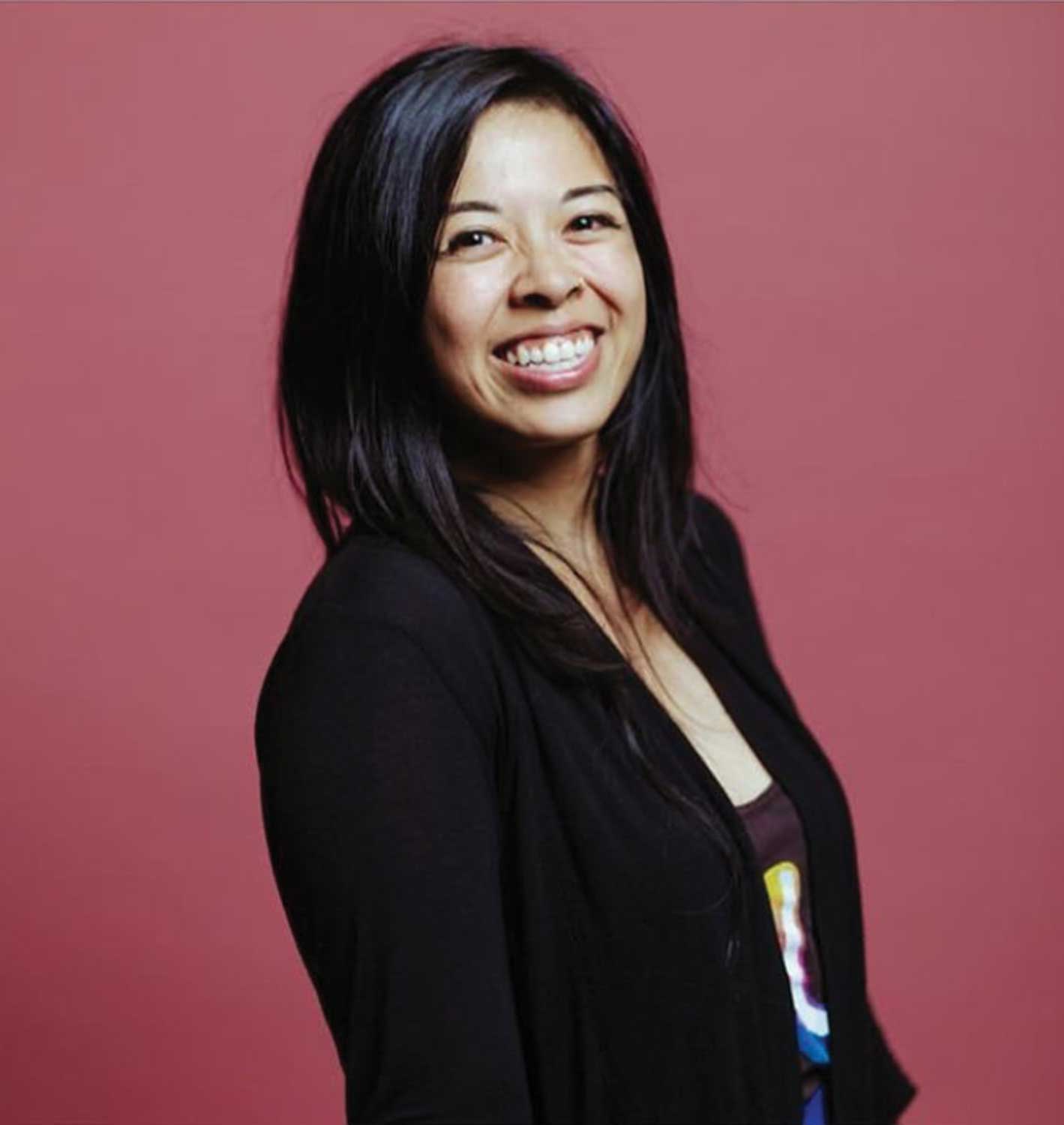 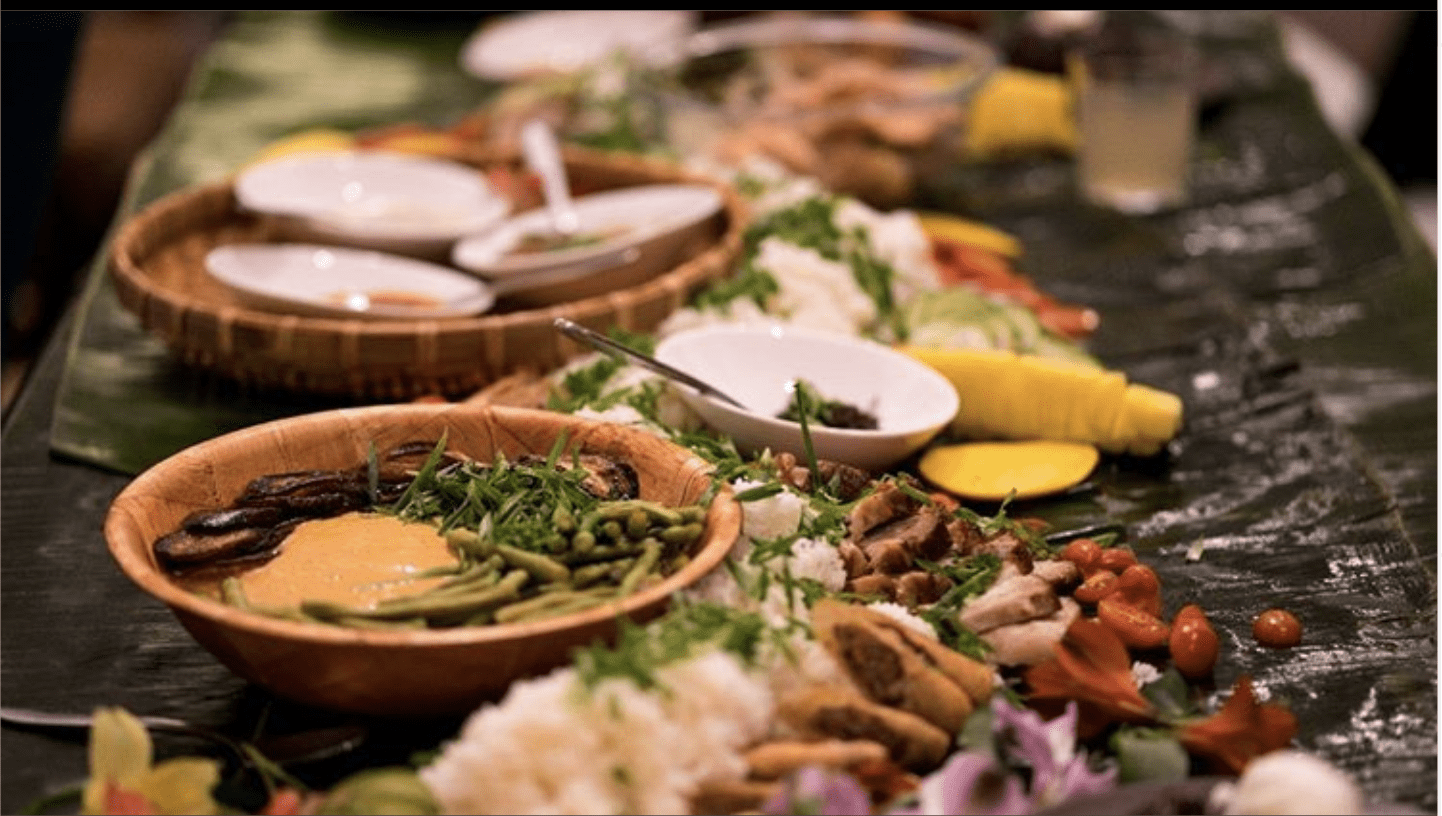 Filipino American chefs across the United States woke up to great news on Wednesday, Feb. 26 as the James Beard Foundation Awards released its Restaurant and Chef Awards semifinalists for 2020.

Up for the Best New Restaurant Award is Tanam in Somerville, Massachusetts.

Margarita Manzke of Republique (Los Angeles) is a returning semifinalist for Outstanding Pastry Chef. Manzke and her husband Walter run Republique, a French restaurant in the Hancock Park neighborhood of Los Angeles that the couple opened in December 2013.

Simeon’s Lineage, a semifinalist for Best New Restaurant last year is the chef’s second solo restaurant. He opened Lineage in October 2018, two years after Tin Roof in Maui, his first venture. He was in two seasons of the Bravo reality show Top Chef, first in the show’s 10th season in Seattle and in the show’s 14th season shot in Charleston.

Eater Boston named Tanam as Restaurant of the Year for 2019. It also describes Tanam as “This tiny Filipinx American restaurant at Bow Market in Somerville is one of the most daring restaurant openings in recent memory: It’s worker-owned, for one thing, and the bulk of its services are multi-course feasts with moderately expensive tickets that must be purchased ahead of time.”

In essence, Tanam is a food and artspace based in Union Square Somerville, about four miles outside Boston. It is an offshoot of Pamangan, a Filipino American pop up that made its way through the Boston area in the past four years or so. Tanam opened its doors in January 2019.

The place offers “Kamayan Dinners” every Wednesday and Sunday and “Storytelling Dinners” every Friday and Saturday. Among the dishes they serve are Sugba Kilaw, Sinigang Chawanmushi and Kare Kare. They also have a bar that serves creative cocktails made with Tanduay, pandan, calamansi, bitter melon and ube, aside from Red Horse and San Miguel Beer.

Ellie Tiglao, Tanam’s chef and art director, has been pushing for “narrative cuisine” ever since their pop up days and says that Tanam is about “telling stories that don’t often get told, shared by the people who live those stories.”

Last week, James Beard Foundation also announced the winners of America’s Classics 2020, given to “older, tried and true restaurants that reflect the character of their communities.”

Among the six honorees this year is Oriental Mart in Seattle, a three-generation family-owned Filipino lunch counter in the heart of Seattle’s iconic Pike Place Market. The mart opened back in 1971 selling groceries, the turo turo style dining began in 1987 and its chef-owner Leila Rosas has been serving her famous dishes since then.

What could be better than the freshest salmon collar sinigang from the market across the street? Pair that with a plate of silog and call it a day. It has been said that a trip to Pike Place is not complete without a meal at Oriental Mart.

Marcus Samuelsson, the acclaimed chef behind Red Rooster in Harlem featured Rosas and the growing list of Filipino chefs and restaurants in the greater Seattle area in the premiere episode of the new season of PBS’ “No Passport Required.”

“Aunt Leila, she’s such a good cook. Her set up is real simple but her flavors are not,” Samuelsson remarked. “When you taste Filipino food, you taste the history.”

Samuelsson spent time with immigrant and second-generation Filipinos who are taking charge of Seattle’s food scene. As Filipino food gains more national, mainstream recognition, members of the community are working to tell the story on their own terms.

Eater Seattle named Archipelago as Restaurant of the Year for 2019 citing the tiny restaurant for its ingenuity, storytelling and passion.

Chef Aaron Verzosa and his wife, Amber Manuguid opened Archipelago in December 2018. Their premise is simple: Pacific Northwest ingredients as the star in Filipino dishes. They get these ingredients, including fresh produce, from Filipino farmers in the Washington area.

“Can I find the taste of what I grew up with in ingredients that are not used in Filipino cuisine?” Versoza said, describing the idea behind Archipelago.

The couple offers a tasting menu consisting of ten courses. According to a glowing Seattle Times review, the meal costs $126. “An evening at Archipelago is both entertaining and enlightening, as much a cultural odyssey as a culinary adventure, though to be sure, at $126 per person, including tax and tip but not beverages, it’s no cheap ticket,” the reviewer said. “Save up. The evening is worth it.”

As they served Chef Samuelsson, Verzosa and Manuguid showed their spin on the Filipino culture’s food traditions, marrying Filipino flavor with Northwest ingredients.

The meal started with a pan de sal made with Washington wheat and served with shallot butter and sustainable caviar from Idaho, followed by kinilaw steelhead belly ceviche served with verjus and mixed apples. The gustatory experience went on with Oregon king salmon sinigang and Maria Orosa, a ribeye steak dish and an homage to the inventor of banana ketchup.

Chera Amlag and Geo Quibuyen are another power couple in the Seattle Pinoy food scene.

Amlag and Quibuyen are the co-owners and founders of Hood Famous Bakeshop (Ballard) and Hood Famous Cafe + Bar, a dessert shop offering her original takes on traditional Filipino sweets and flavors. She was born in the Philippines, grew up in Bremerton, graduated from the University of Washington, and currently resides in Seattle with her husband, Geo, and two sons.

Hood Famous has become a favorite among Seattle foodies and visitors for their sweet pastries and among their most famous and bestselling products are the ube cheesecake, buko pie and mango calamansi cheesecake, perfect with a cup of hot coffee or pandan latte.

Established in 1990, the James Beard Awards recognize culinary professionals for excellence and achievement in their fields and furthers the Foundation’s mission to celebrate, nurture, and honor chefs and other leaders making America’s food culture more delicious, diverse, and sustainable for everyone.