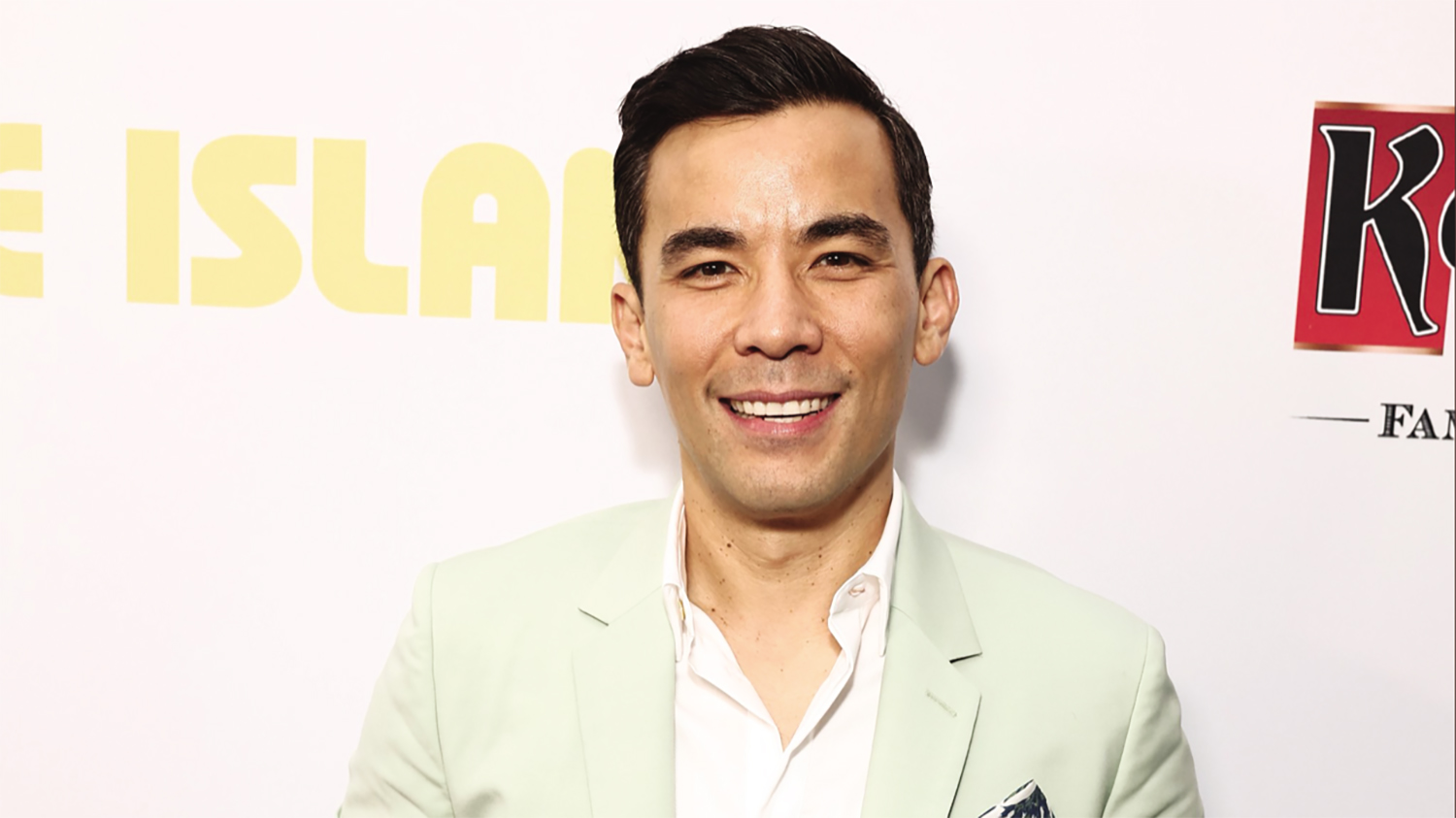 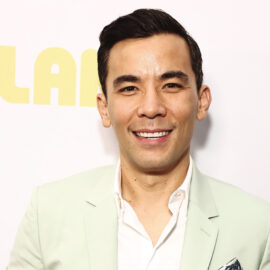 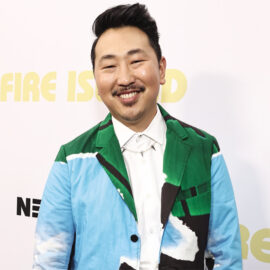 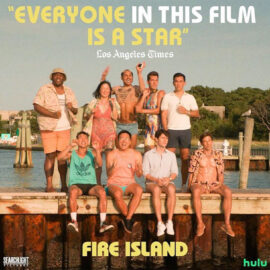 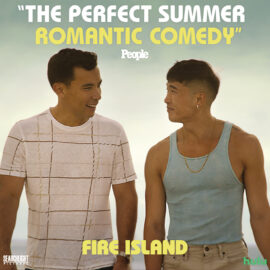 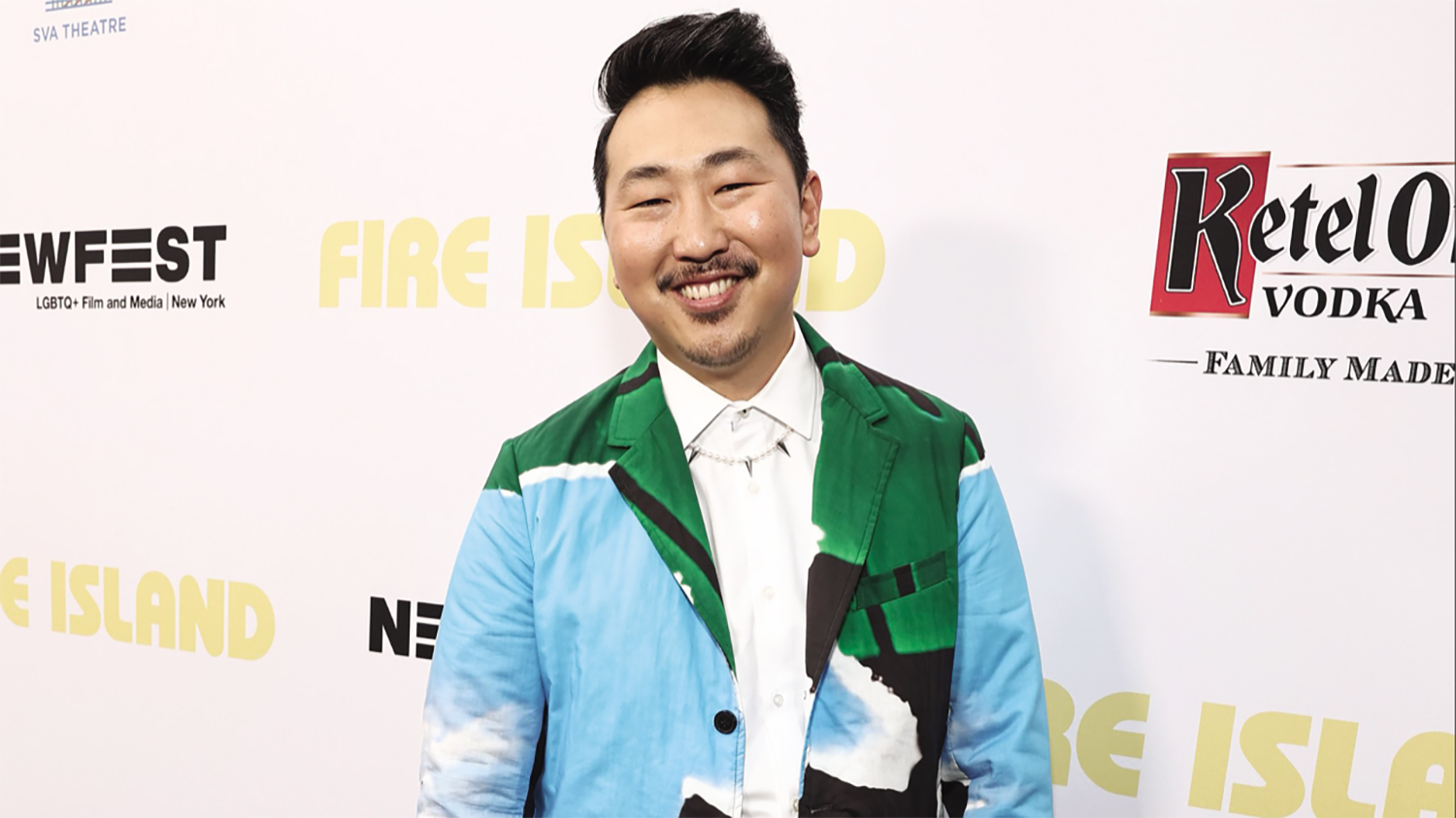 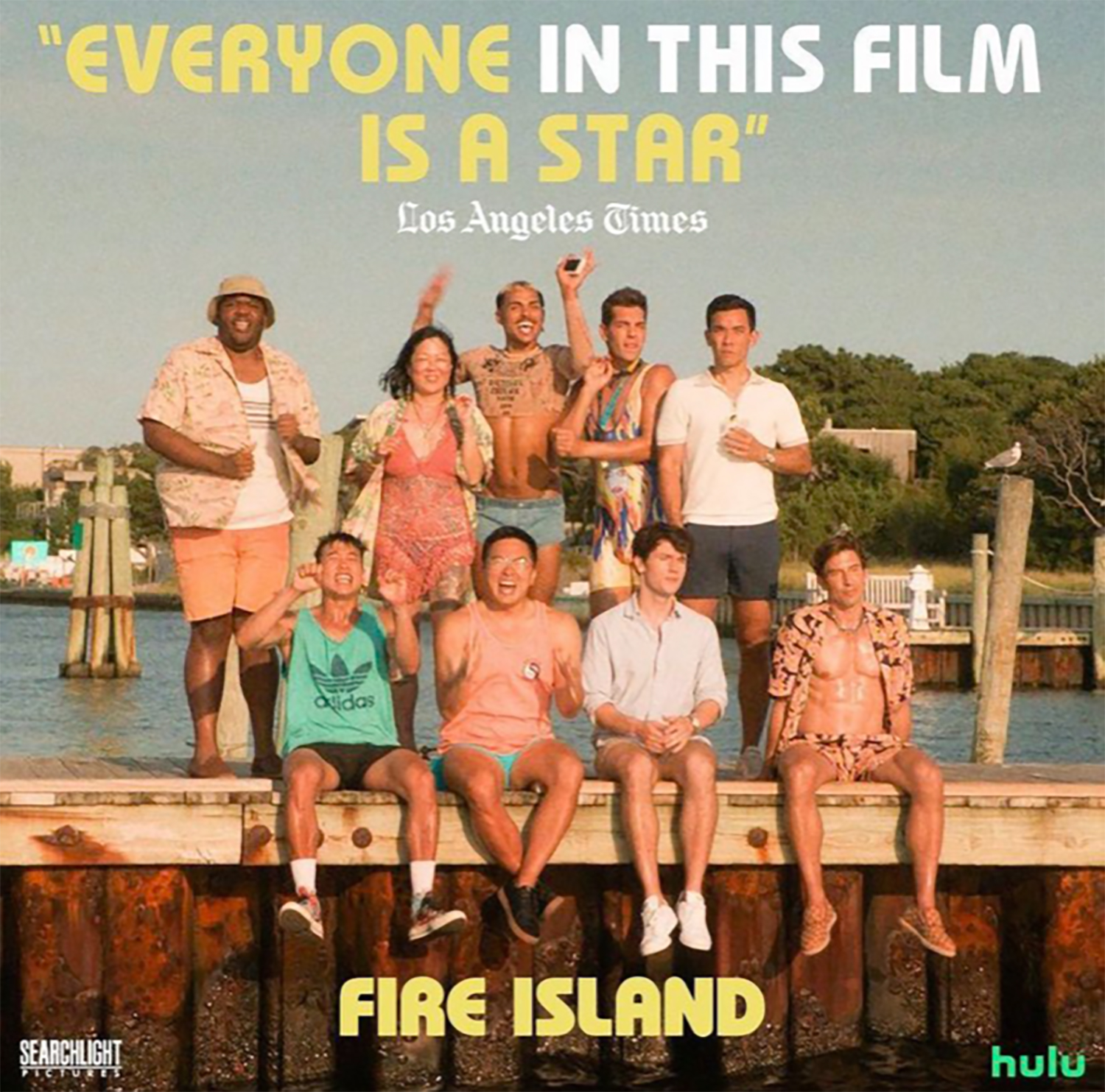 Director Andrew Ahn on what his dream is for Fire Island: I’m excited for a movie like Fire Island to bring a group of queer Asian Americans together to let us feel strong and beautiful. And then with that strength, take it one step further and make this world a better place, to go out there and donate to mutual aid funds to go vote to protest, to support community organizations. You know, it’s through this action that we can make a real difference. And so, I hope that this film inspires people to be beautiful, be strong and take that next step. 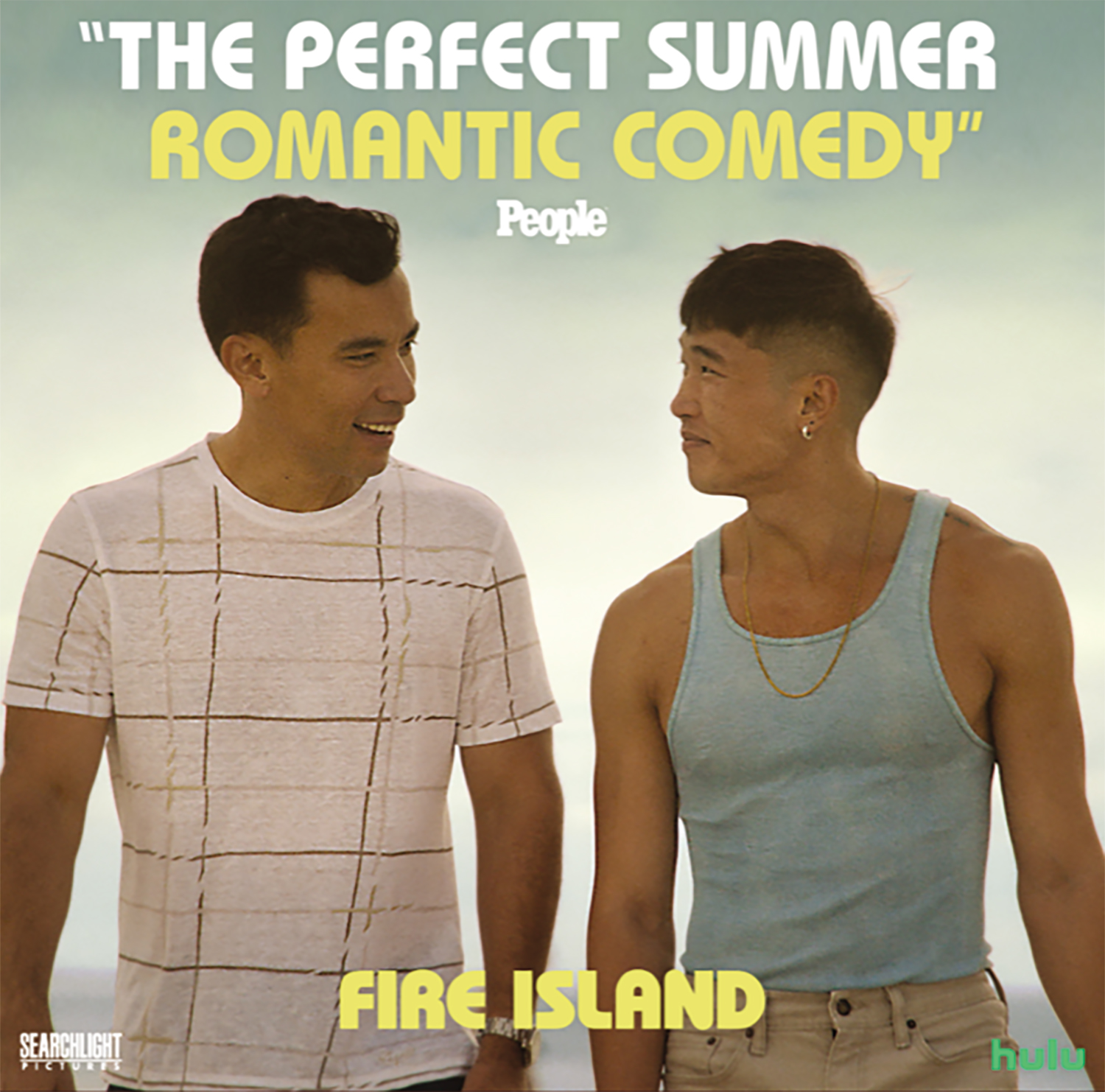 Joel Kim Booster and Conrad Ricamora star in Fire Island, the modern rom-com adaptation of Pride and Prejudice. The film is currently streaming on Hulu.

THIS story began when comedian Joel Kim Booster went to Fire Island in the summer of 2016 and brought along with him a copy of Jane Austen’s Pride and Prejudice.

“I was really struck then by how relevant all the themes were to me and my life and what we were experiencing living on the island,” Booster echoed.

Fire Island had its premiere at the SVA Theatre in New York last week for the NewFest Pride, a day before the film began streaming on Hulu.

“I’m feeling insane. To be honest, I’m feeling really, crazy, but really grateful,” Booster said when asked how he felt that what was once was just an idea was now a film celebrating love and friendship.

He is feeling hopeful that the film somehow provides “a brief reprieve with this bit of joy”, especially to the Asian and gay communities which are both waging battles against hate and ignorance.

“As a queer person, I think right now both of our communities need a little bit of joy. I think if we live in the negative then we won’t have the energy to fight and I think this brief reprieve is a vital part of the holistic arsenal that we all need to continue to fight hate in this country,” Booster added.

And that is exactly what the film is about. Fire Island follows a group of gay men spending a week on the famous summer getaway.

It’s a romantic comedy that dwells on various issues beyond romance and friendship, tackling deeper issues such as racism, classism, and even sexual harassment and assault.

Director Andrew Ahn remembers getting the screenplay from Booster a year into the pandemic.

“I read it and I just loved how it celebrated queer friendship that celebrated chosen family. These were things that during the pandemic I hadn’t gotten to experience a lot. And so I saw in the script so much of what I was missing in my life, and this movie helped me find that again,” Ahn said.

Echoing what Ahn mentioned earlier, Broadway performer Nick Adams said that the cast created a special little group for each other.

“Honestly, we formed the most special little chosen family that we all text each other almost every day since we wrapped at the end of September,” Adams said. “And I think that’s always our special takeaway when you make lasting friendships.”

He feels proud to be a part of a crew that created a love letter to Fire Island, the community, and the traditions.

“It’s about love, friendship, about celebrating your individuality, and it’s about this amazing getaway off the coast of New York City,” Adams said. “People that have been going out there for years and years and the people that came before us and allowed us to have the opportunity to keep going out there would be very proud of this film.”

Yang on the other hand is thankful for the opportunity to work with the rest of the cast.

“This cast was incredible, there’s not a single dud in the cast. Everyone is so vital and everyone has become part of this family. And working with Margaret Cho was just the most full-circle moment that we could have had,” he shared.

Conrad Ricamora, fresh from his stint as the first Asian Seymour in the Off-Broadway musical Little Shop of Horrors is cast in this film as a romantic lead.

“It feels amazing to be doing a show that shows Asian American men being powerful, sexy, vulnerable, three-dimensional, complicated, messy,” Ricamora told us at the rooftop after-party. “It feels great. I feel excited and I feel all the feelings.”

He shared that it was his first time going to Fire Island when they shot the film last year.

“I’ve fallen in love with it and I’m gonna go every year,” he quipped.

Being that this is Booster’s reimagination of Pride & Prejudice, Ricamora said he feels honored to be the first Asian Mr. Darcy.

Booster believes it is Austen’s best and most timeless work.

“It’s the most complicated and interesting and I think Elizabeth Bennett is one of the all-time great literary heroines and I wanted selfishly to play her,” he said laughing.

Bringing Austen books every time he travels back to Fire Island has become his tradition since 2016. This year, he is bringing Northanger Abbey. n

Conrad Ricamora stars in ‘Soft Power,’ a political musical from an Asian perspective