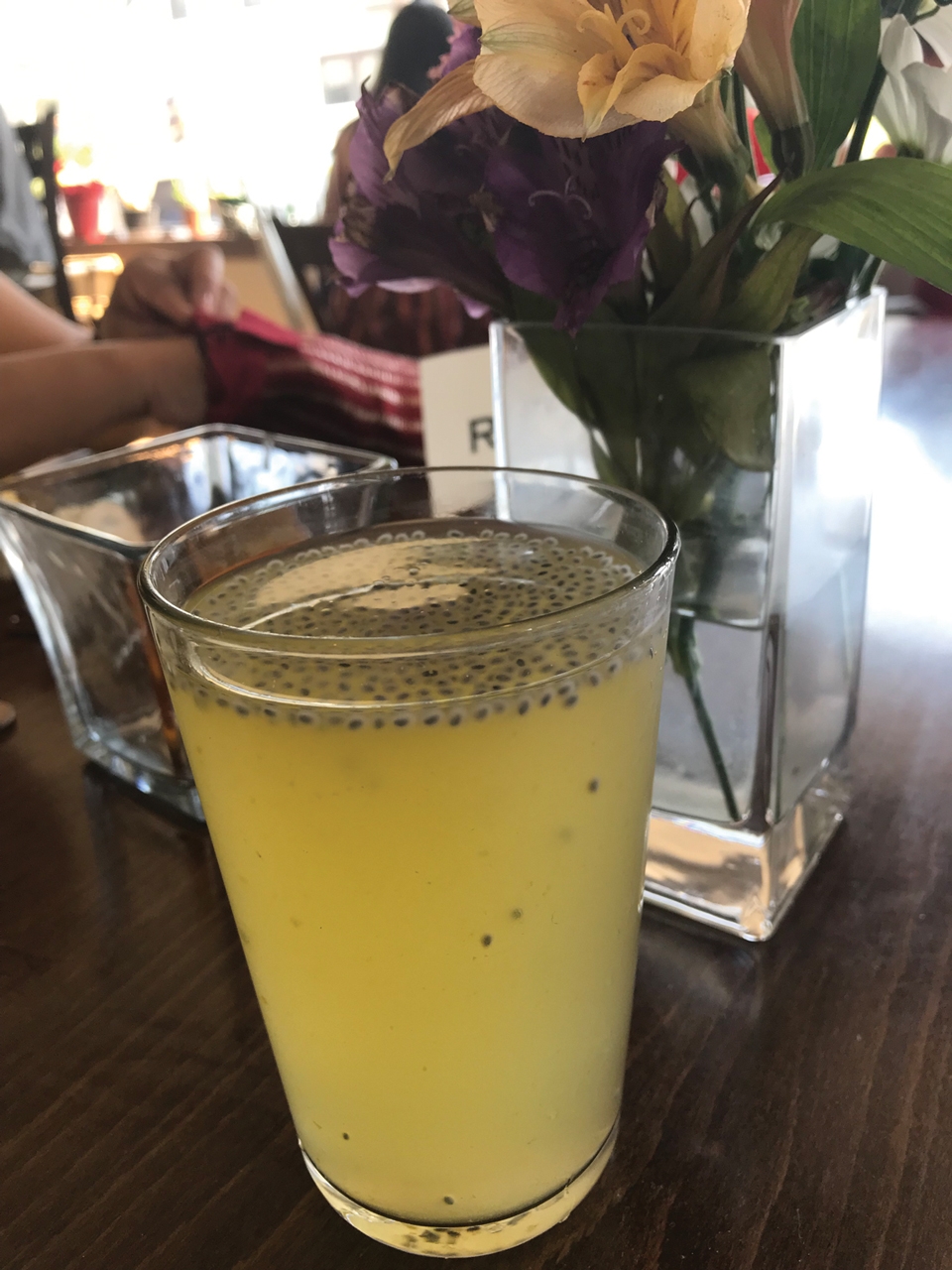 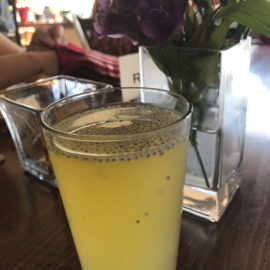 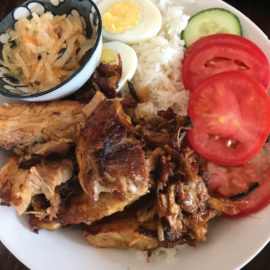 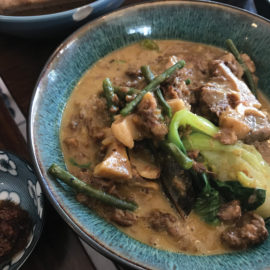 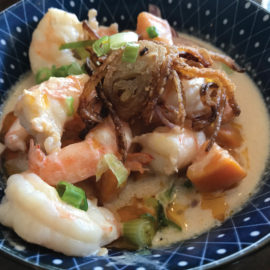 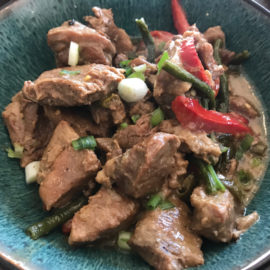 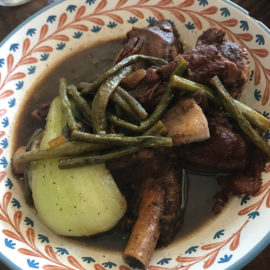 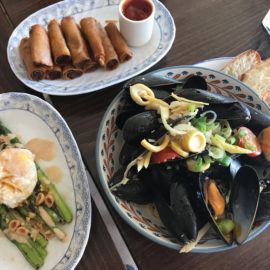 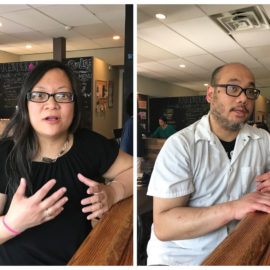 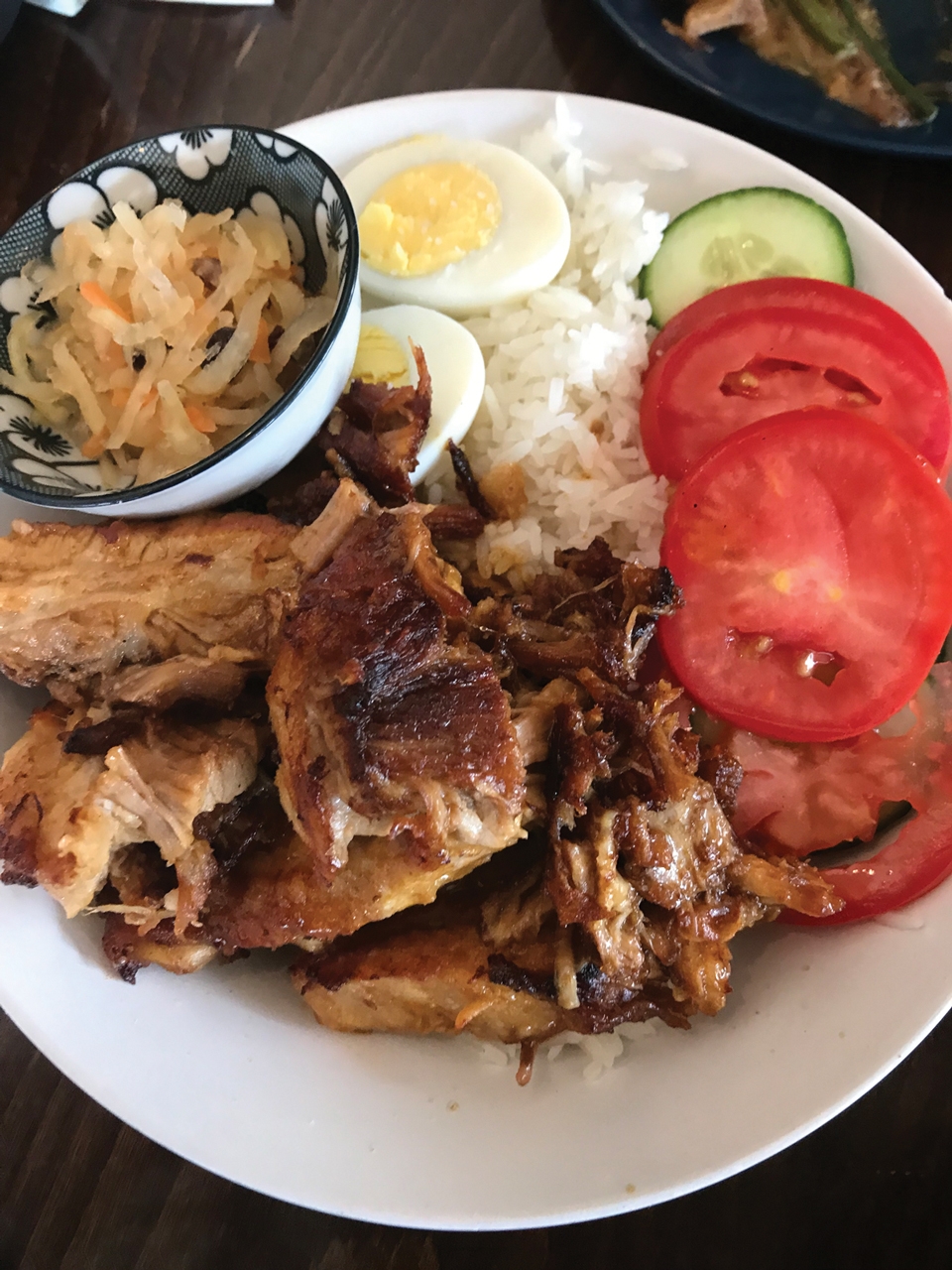 One of their bestsellers is the pork ribs adobo, served here with a boiled egg and achara. | AJPress photo by Momar G. Visaya 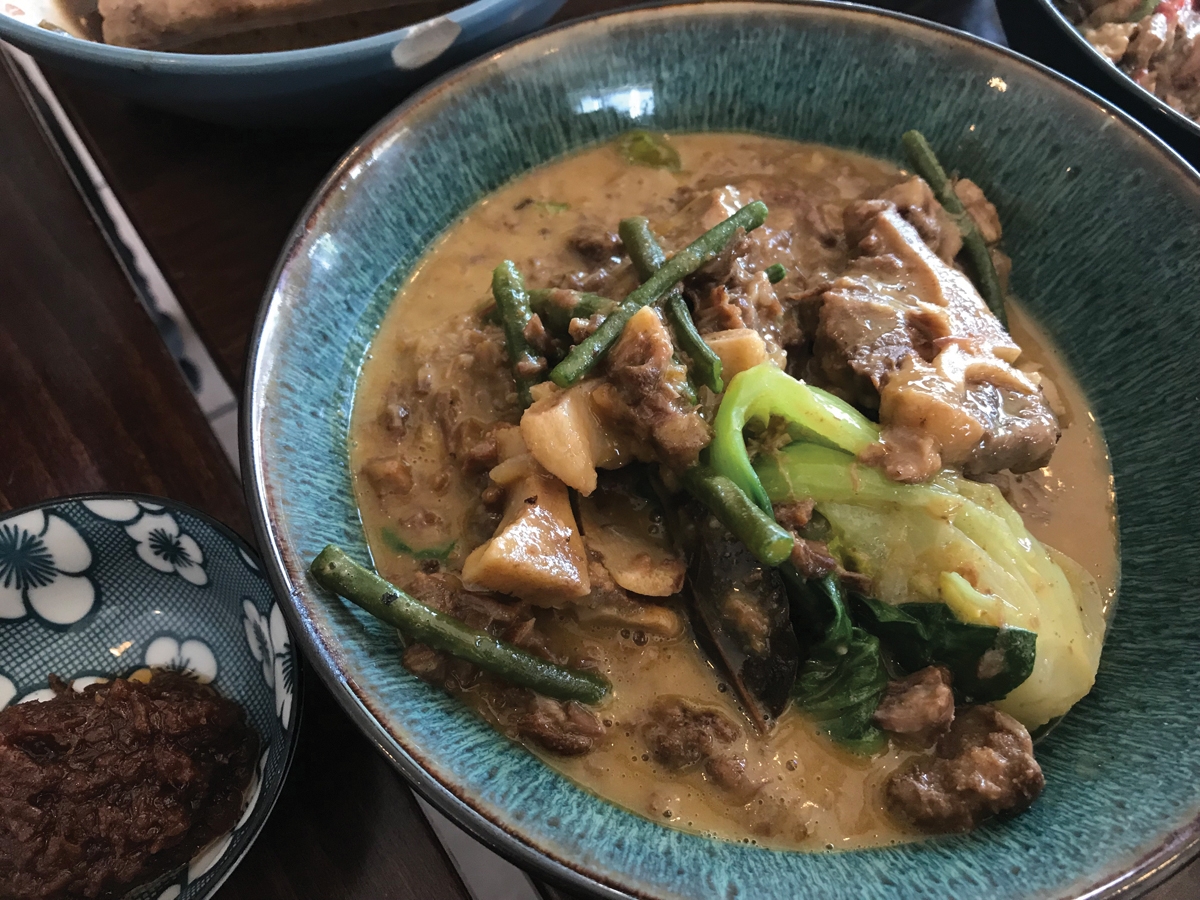 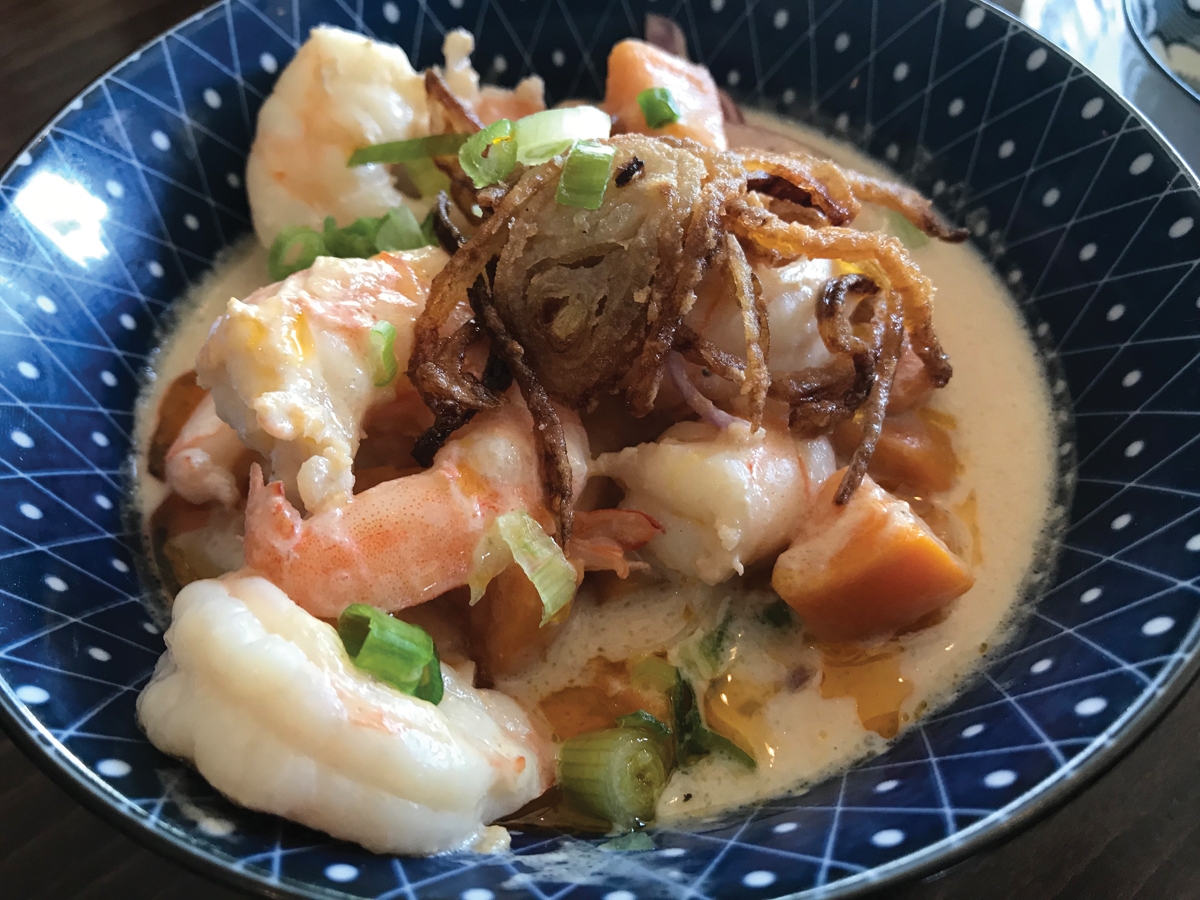 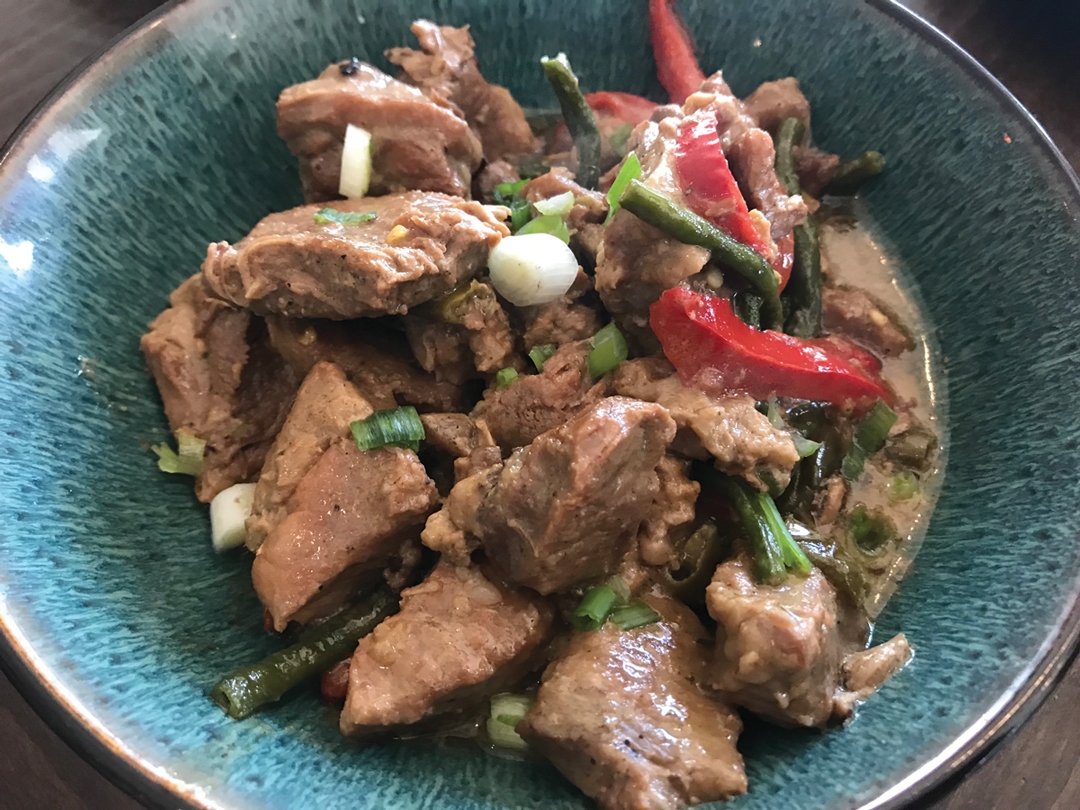 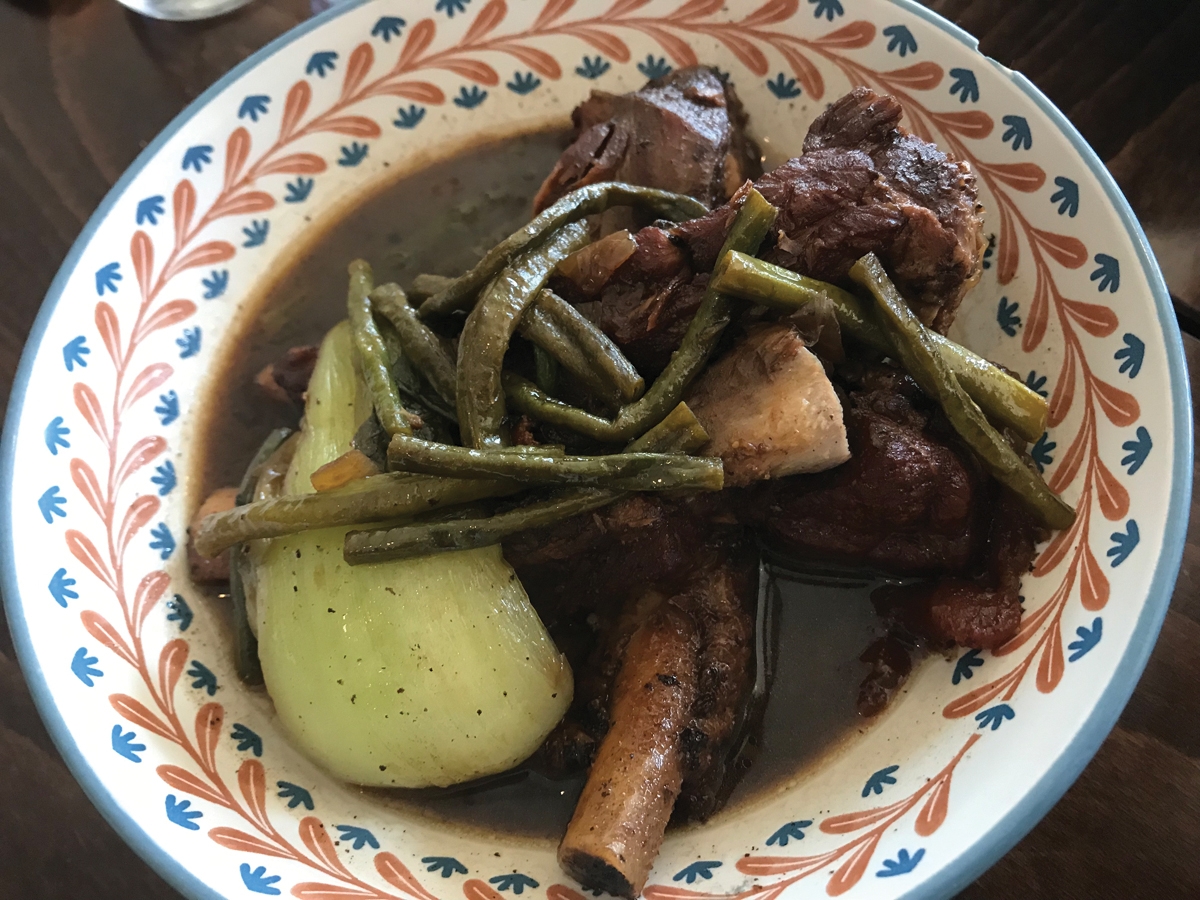 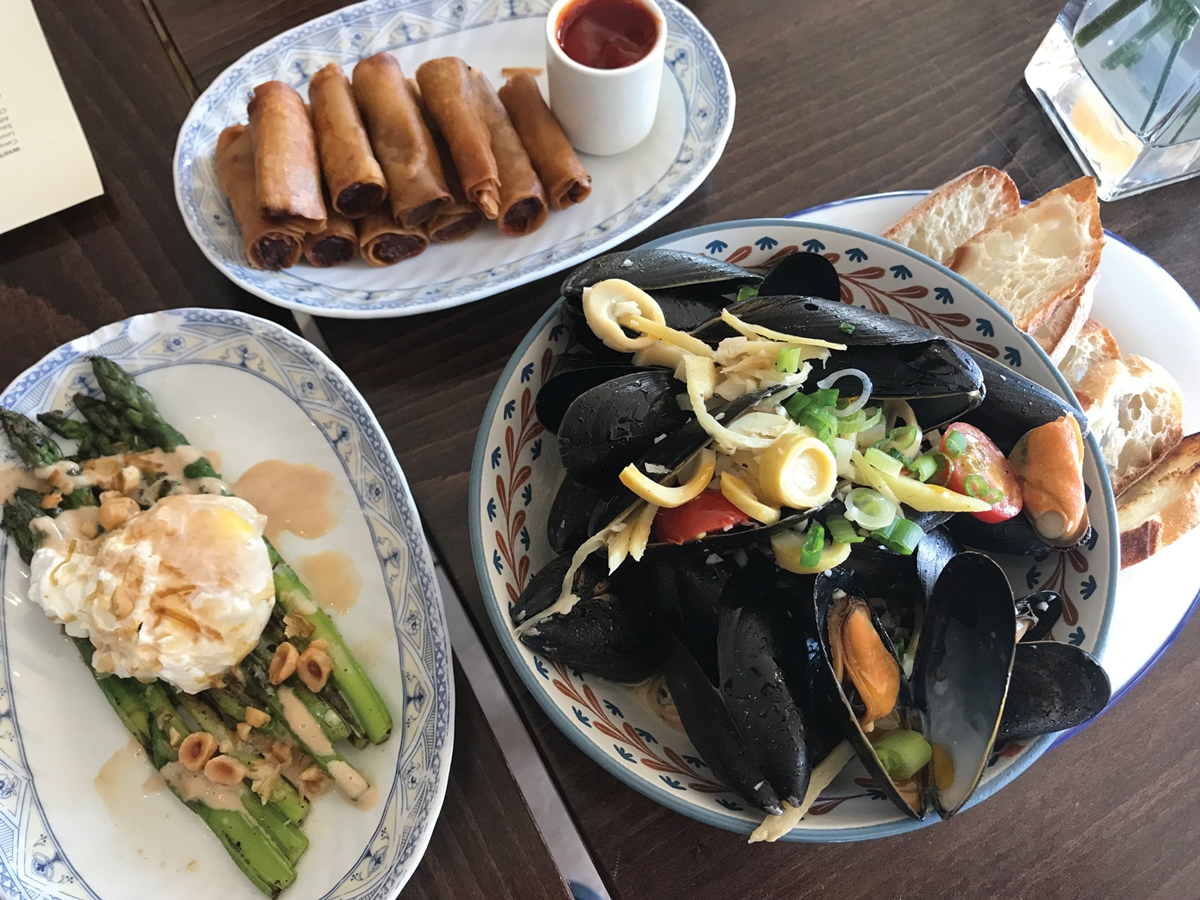 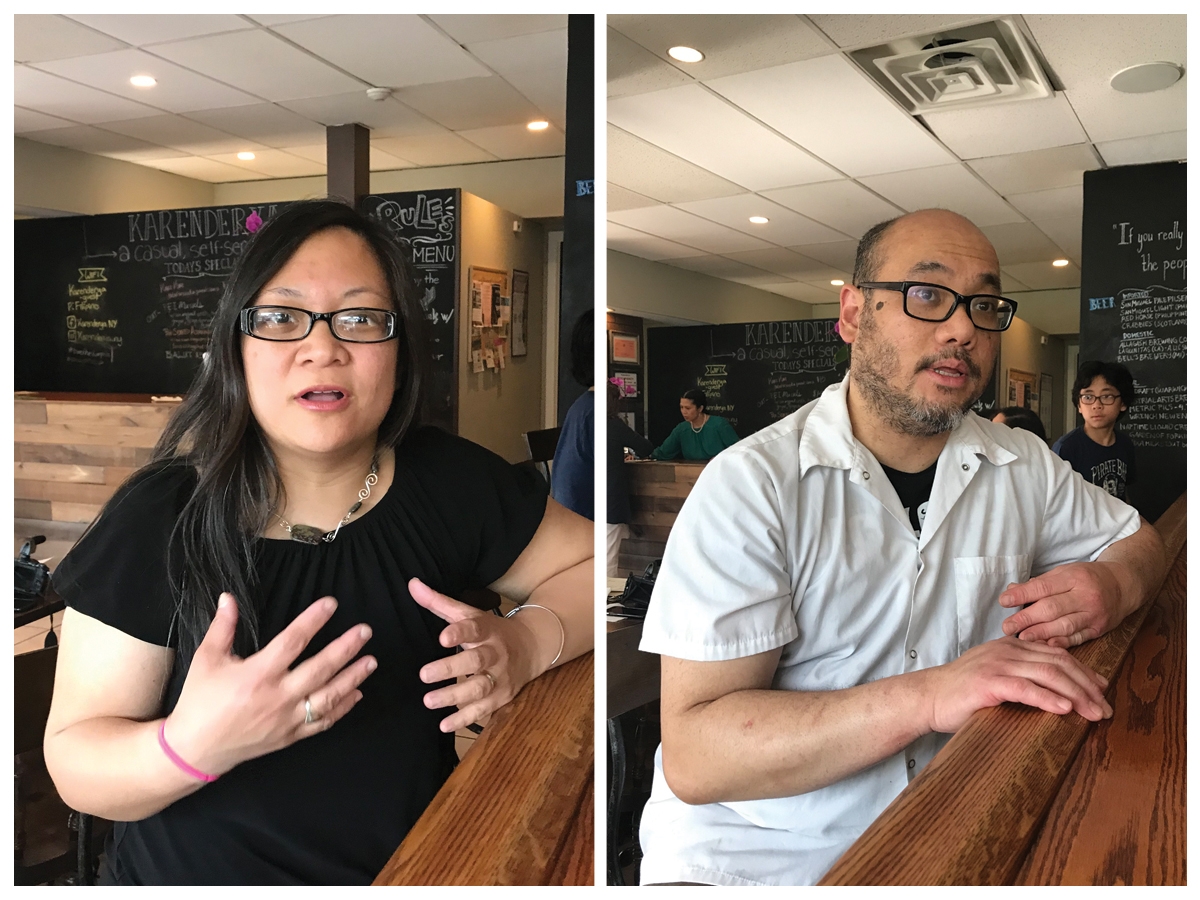 Karenderya, a Filipino-inspired restaurant, opened its doors in the suburban village of Nyack in July 2017.

According to Esquire, “In the future, we pray, thousands of small towns in America will have Filipino restaurants as excellent as this one, with adobo pork belly braised to crispy meltiness atop garlic rice, and shrimp aswim in a coconut broth that tastes like French cream, and a cassava-jackfruit cake that comes across like a cobbler in which the topping and the filling have magically merged, and a smart beer list that highlights the best of Hudson Valley breweries.”

The owners, Paolo Garcia Mendoza and Cheryl Baun, were beyond thrilled.

“That was completely crazy, totally unexpected,” Cheryl said, remembering the moment. “It was a validation, not that we needed one because we’ve known that this food is good all along. Not our food in particular but Filipino food in general. It feels like a win for our culture and for Filipino food.”

Indeed, chalk it up as a major win.

Business tripled, quadrupled even as people began to flock to Karenderya to see what the fuss was about. How could this small gem of an eatery in Nyack nab a place in the esteemed magazine’s Best New Restaurants in America list?

But first, we asked them, how did it happen?

Jeff Gordinier, the food and drinks editor of Esquire, is a local in the area and he went to the restaurant.

“I recognized when he first came in because I follow him on Instagram,” Cheryl recalled. “He did introduce himself, he was a very friendly guy and we started chatting. The restaurant wasn’t busy at the time so we talked about the food and it was a nice conversation.”

That was the end of it, or so she thought. Here was a nice guy with his family eating our food.

“It never occurred to us that he would ever write about us. The best that I hoped for was maybe he would post something on Instagram. I would have been so happy with that,” Cheryl shared.

A few months later, the magazine contacted them for a possible feature.

“That was a huge shock when it came out,” she remarked. “It’s still so hard to believe.”

They were expecting a restaurant listing, or maybe even a part of a feature on Hudson Valley restaurants. What they did not expect at all was their Karenderya being named as one of the Best New Restaurants in America for 2018.

“We see more Filipinos now that we have gotten some attention,” Cheryl said smiling. “It almost seems like it is more validation for the Filipinos who might have been skeptical.”

The restaurant’s clientele has always been very diverse, from locals who were not familiar with the food at first, to regulars who come from the neighborhood, to day-trippers from New York and New Jersey who make the drive during the weekends.

More than two years ago, Cheryl and Paolo decided to open a space in Nyack, a village in Rockland County that is about 20 miles north of Manhattan. Paolo as the chef would be in charge of the kitchen while Cheryl would handle some of the business and management side, including building a strong community-based presence for their restaurant.

Cheryl grew up in the Rockland County area while Paolo grew up in Pasay City, Manila.

“We chose this town because it is a very artsy town. We knew that if we were to open a restaurant, it would be here in Nyack. Parang ito yung Brooklyn ng Rockland County,” they said.

They chose the name as an homage to the Filipino carinderia, which are market or roadside eateries in the Philippines.

The couple saw that opening a Filipino restaurant in the area is an opportunity for them “to share our food, but more than that, we want it to be a gathering place.”

That is how Karenderya has been in the past year, a place where people would come in and have a full experience, eat well, enjoy the food and feel the welcoming space. It is a place where couples can have drinks and still bring their kids, they can eat and linger if they want while the kids play in one corner.

“We serve the food that we love. If you’re Filipino and you look at our menu, you’d see a lot of things that are familiar. Occasionally, you’ll see some things with a twist,” Cheryl said.

On their menu are silog bowls, from the traditional tapa and longganisa to chicken tocino and pork ribs adobo. For first-timers who are not familiar with Filipino food, these dishes can be served as a sandwich and they will get the same full Filipino flavors.

Paolo previously worked in fine dining restaurants and he knew that when he opened his own, it would be relaxed, casual and comfortable place for everyone to enjoy, including families with small children.

He insists on serving some traditional dishes and mixes it up with his creations. An example of this would be their pork ribs sinigang. It does not look like sinigang at all but when you taste it, all the flavors of the dish are there.

His secret for the dish? No sinigang mixes, he uses tamarind puree, which makes the broth a little darker. He sears off the meat as well, which gives it the dark brown color and more flavor.

“I have to give props to Cendrillon because they were the first ones to do this. I don’t want to use the word elevate. Sila yung pioneers ng modern Filipino cuisine,” Paolo said.

Karenderya is Paolo’s first Asian restaurant. He previously worked in restaurants that focused on French and new American cuisine and his last job was a sous chef at Roost, a restaurant in Rockland. He also interned at Tabla, owned by Floyd Cardoz.

When he started studying culinary arts at the Institute of Culinary Education (ICE) in 2003, Cendrillon was the only Filipino restaurant in the city and as early as then, Paolo has dreamt of opening his own Filipino place some day.

Years later, Maharlika and Jeepney opened and people started talking about Filipino food. He knew the timing was good. He quit his job and they opened Karenderya.

Two years in and the couple are working extra hard to keep the restaurant running. They know that it is a tough business, and they are prepared. The couple is thankful that Esquire played a major role in their journey so far and made things a tad easier for them.

“People ask us ‘when are you opening in this place or that place’ and we don’t really think of it that way. We just try to think of how to make this the best that it can be. You can always make something better.

Our guess our dream for this restaurant is to just be the best in that, and make sure that people have a great experience from the moment they walk through the door and the time they leave,” Cheryl said.