HAPPY New Year! With a fresh start in front of us, it’s customary to reflect on what the past 365 days were like. But, how would one even begin to describe 2020, especially the events that unfolded and defined the year?

Let’s see: the ongoing COVID-19 pandemic and its effects on vulnerable communities like the Filipino American community; the introduction of two vaccines against the virus; the United States’ continued fight for racial equity; the November general election; the decennial census and the court rulings that followed; deaths of numerous high-profile individuals; championships for the Los Angeles Dodgers and Lakers…among many other headlines.

Following tradition, the Asian Journal editorial team dedicates the first issue of the year reflecting on the  LifEASTyle  stories from 2020. Each week, the  LifEASTyle  features long-form stories of Filipino American personalities, organizations, and businesses that continue to break barriers in their respective industries, as well as highlighting the Fil-Am experience living in America and the various social issues the community faces.

The 52 features published have covered ways families have celebrated major holidays while staying safely at home, how business owners in the tri-state have coped with the ever-changing restrictions related to the pandemic and the summer of protests for racial justice, new books by Fil-Am authors, and more.

It’s always difficult to narrow down the best features — as each one is compelling — we remember several stories that have been widely shared and discussed. To read these selected features & other stories in their entirety, visit:  https://www.asianjournal.com/category/magazines/life-eastyle-magazine/

Last year, we featured a host of personalities, ranging from authors with current and upcoming books and actors who are on stage, television, or film.

Films helmed by Filipino and Filipino American directors made it to various New York festivals including the Doc Fortnight at the Museum of Modern Art (“Aswang” and “Overseas”), New York Asian Film Festival (“John Denver Trending” and “Girl and a Gun”), and the multiple titles showcased in the Asian American International Film Festival. 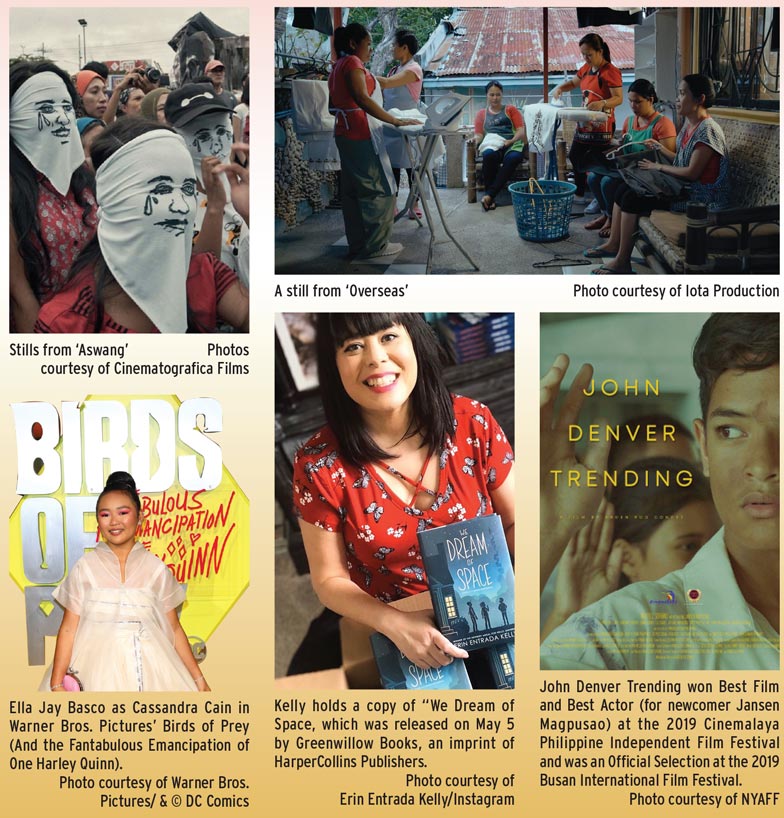 “Birds of Prey” introduced Ella Jay Basco, who happens to be a niece of Dante Basco. Josh Dela Cruz took on Blue’s Clues and brought in his lola in an episode where they cooked bibingka. Nico Santos stole some of the limelight in “Superstore” and Spyros Bros delivered eye-catching performances on America’s Got Talent.

We honored Fil-Am chefs who were recognized by James Beard Awards, including Tom Cunanan, who won Best Chef: MidAtlantic in 2019. He left Bad Saint early this year and in November, led a band of Fil-Am chefs to stage ‘A Taste of the Philippines,’ a project that he has been dreaming of for years now.

Since they don’t get to cook together, Cunanan saw this as an opportunity to be able to collaborate and work with each other to showcase Filipino cuisine to a broader market in Washington, DC.

A week before the lockdown in New York, we celebrated Louis Bayla, who was declared “Prince of Pork” at Cochon 555, a celebration of all things pork. Bayla, Chef de Cuisine at Little Park in Tribeca emerged victorious after the dual judge/guest vote was tallied and he was supposed to represent the city in the grand championship last year. His winning lineup that got him the votes: sinigang wrapped in cabbage (using loin and bones); pancit palabok (shoulder, butt, and skin); sisig (head, belly, and offals), adobo pork rib (ribs and liver), and halo halo (trotter, knuckle, and skin).

We also mourned the death of Chef Rod Aglibot, who introduced Filipino food to mainstream America in San Francisco back in 1996. He was then working as a sous chef at E&O Trading Company, a pan-Asian restaurant, which served wood-fired adobo pork chops and Filipino egg rolls. He moved back to Los Angeles as the chef of Zazen, another pan-Asian restaurant where he infused more Filipino dishes and flavors into the restaurant’s menu.

He became more famous in the Los Angeles area when he became the opening executive chef at Koi, a celebrity hotspot. Then he opened Yi Cuisine, where he wrote a menu that mirrored his biography as a young chef and served several Filipino dishes. He then moved to Chicago and became the founding chef at the hotspot Sunda. Years later, he opened Me Geisha Salerno in Rome and Salerno.

The global pandemic brought a lot of hardship to small business owners with the restaurants and food business among the industries hit hardest.

Three Filipino restaurants in New York and New Jersey defied the odds, rolled the dice, and made it happen. Bilao, Tradisyon, and Jayhan’s Grill opened despite the grim prognosis and continued economic uncertainty. That they opened in cities that were once among the world’s top spots for the pandemic took a lot of bold audacity especially with numerous restaurant closures left and right. 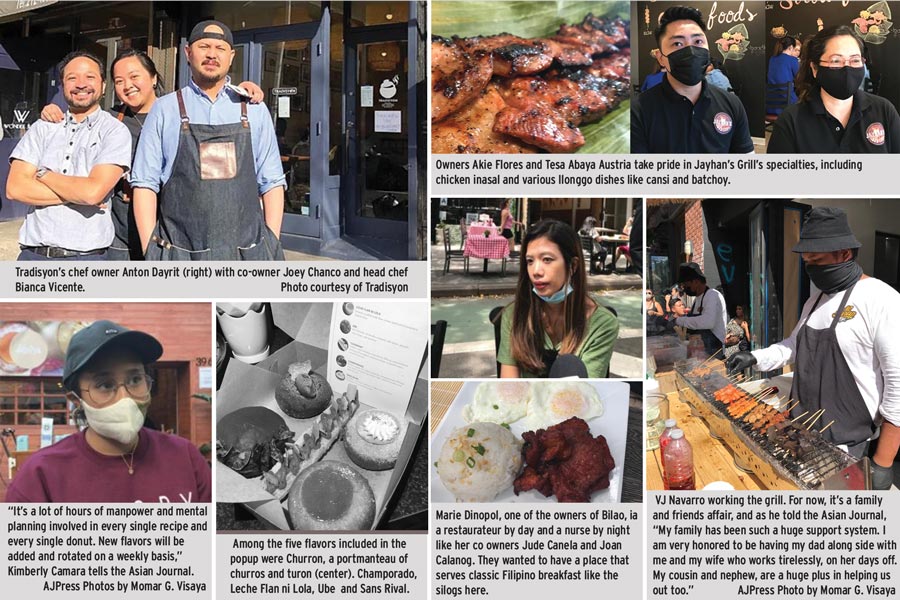 Two others: So Sarap NYC and Kora took the popup route and found immense success. Another thing they have in common? They were not only selling food, they were hawking nostalgia.

There are some food items that automatically trigger nostalgic trips down memory lane for many, and that holds true for Filipinos who have lived abroad for a while now who have an earnest yearning to travel back home. The long lines at Kabisera on Allen St. on Labor Day Weekend and the succeeding weekends after that is proof.

Hundreds of people lined up just to have a taste of classic Filipino street food, the way they were sold and eaten back home. The aroma of fishballs, kikiam and kwek kwek being fried, as isaw, pork and chicken barbecue and betamax cooked to perfection on the grill wafted along the streets of Manhattan and pulled in some onlookers.

In Queens, people were in line for four hours just to get their hands on some Filipino doughnuts.

Kimberly Camara began her online bakery during the pandemic. While stuck in lockdown, she began baking cakes, and one day, she had leftover dough so she experimented and fried some of them and the first version of her ube doughnut was born.

Camara then came up with ideas, among them, using Filipino flavors from classic Filipino desserts that her mother’s mother Corazon used to make for them. Now, she makes all the doughnuts and their components from scratch and in small batches right from her own kitchen.

Year in review: Revisiting the SF Magazine stories of 2020