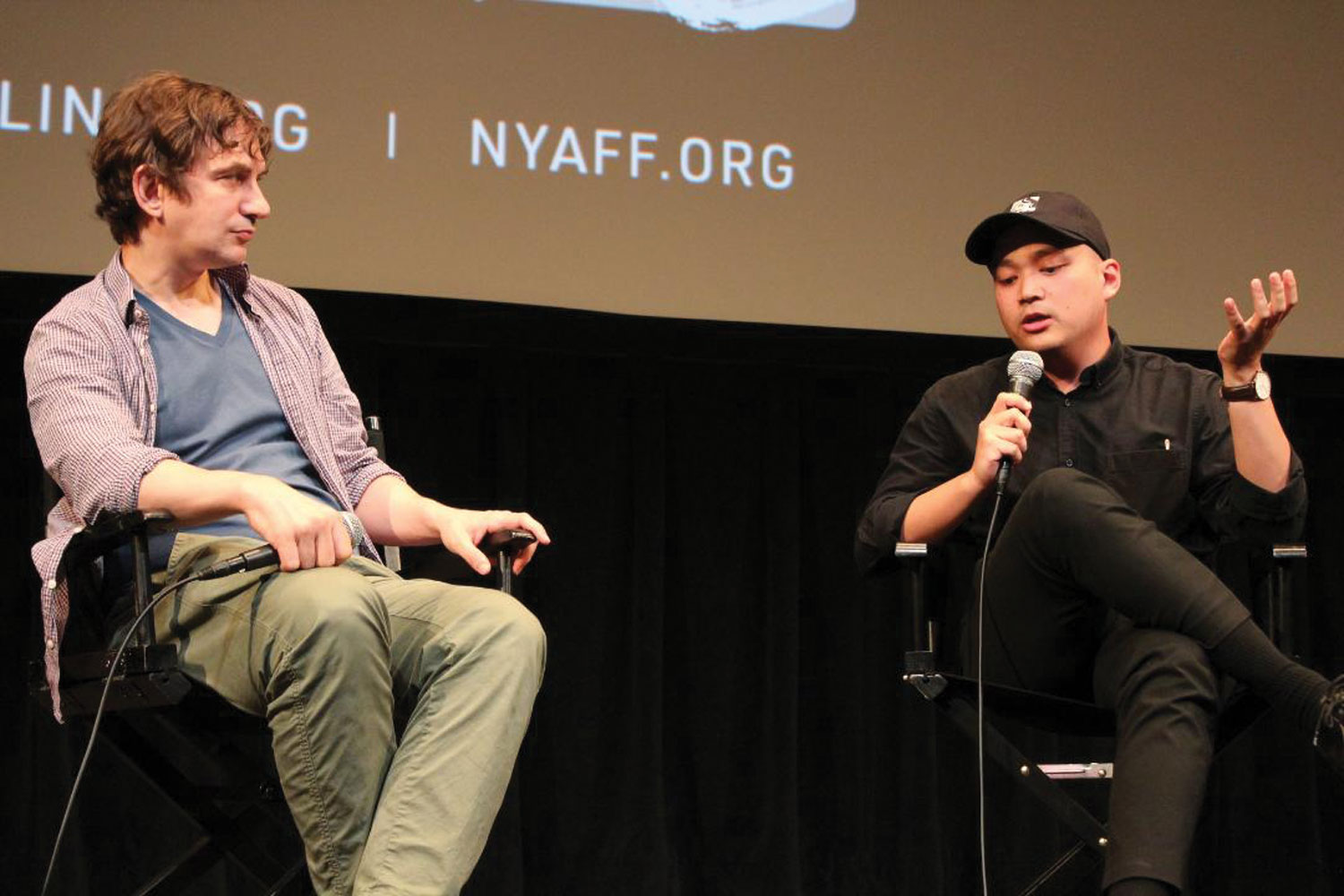 Director Kenneth Lim Dagatan of MA in a Q and A after the film screening. | Photo by Stephanie Lun/NYAFF 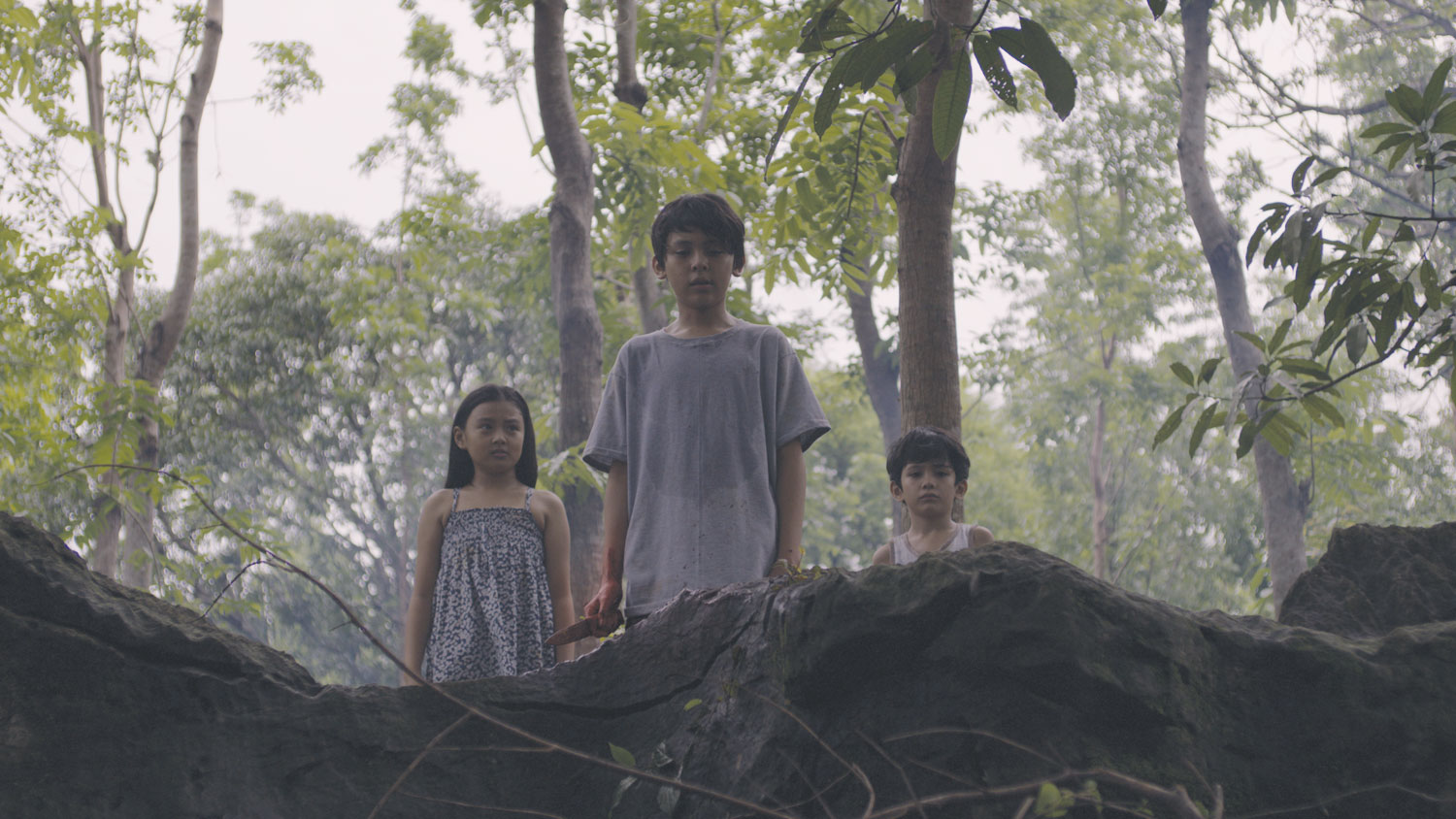 A scene from Ma, a film from director Kenneth Dagatan.

A scene from Signal Rock, a film directed by Chito Roño and the Philippine entry to the Oscars this year. 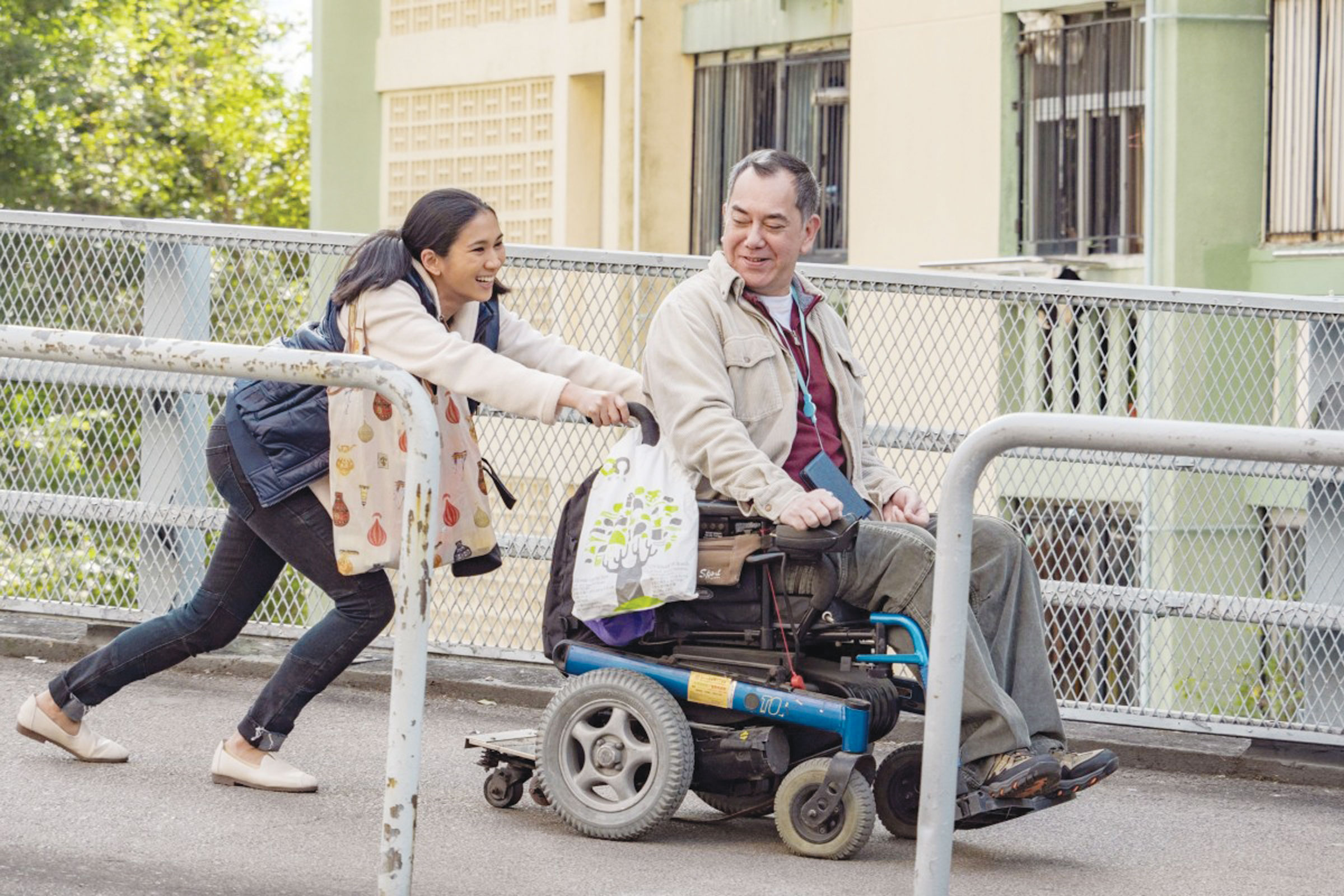 Anthony Wong and Crisel Consunji share a scene in Still Human, a film from Hong Kong about a disable man and his caregiver. Photo from Still Human. 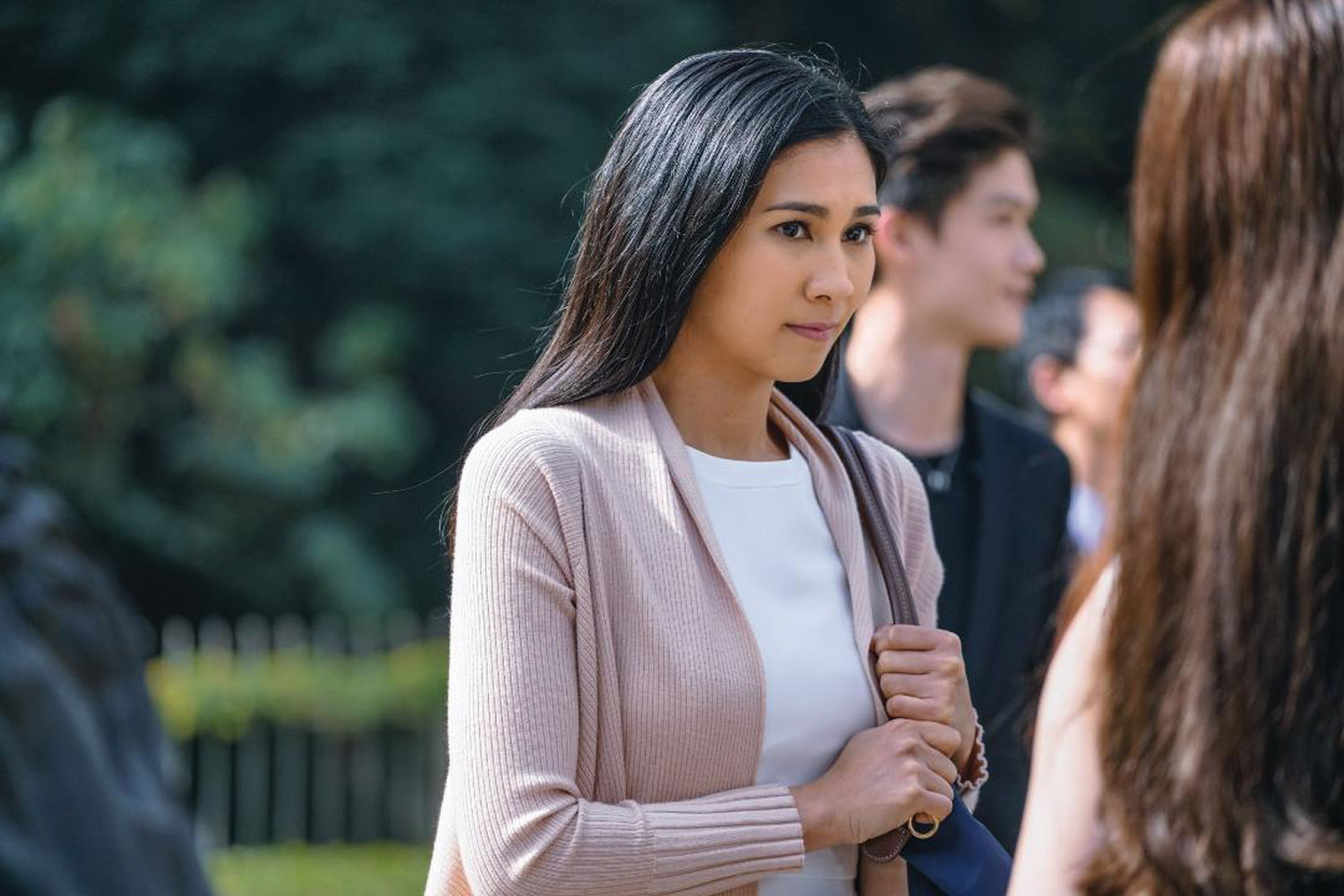 The 18th edition of the New York Asian Film Festival (NYAFF) ran from June 28 to July 14, and film buffs in New York had an opportunity to watch some of the most exciting action, comedy, drama, thriller, romance, horror, and art-house films from East Asia.

This year’s batch included a couple of films from the Philippines, Signal Rock and Ma. Crisel Consunji, a Filipina actress plays the lead in Still Human, one of the films from Hong Kong. Both Dagatan and Consunji attended the screening of their respective films.

The “too young to die” reference comes from NYAFF 2016 audience award winner, Kudo Kankuro’s Too Young to Die!, where a busload of high-school students plummet to their deaths. They either end up in heaven or hell, both of which defy expectations. Graduating into adulthood, NYAFF aims to defy expectations cinematically.

Like in previous years, NYAFF had a lineup that had both high-concept thrills and lowbrow gags as evidenced by the irreverent action-comedy stylings of the gonzo manga adaptation Fable and the singularly Singaporean zom-com Zombiepur.

As they proclaimed, “From the deadly serious to the gleefully absurd, from the disquieting to the freaky, NYAFF continues to celebrate the most vibrant and provocative cinema out of Asia today.”

Ma, director Kenneth Lim Dagatan’s chilling feature debut made its international premiere at the NYAFF. He was in attendance when the film was screened and talked about some of his inspirations behind the creation of his movie.

“It’s a love letter to my childhood stories and favorite Western and European films,” Dagatan explained. “I took some elements from my childhood, horror stories like this pregnant woman being killed by this mysterious guy and the high school that I attended was near a cave, and I bonded that with elements from my favorite films.”

Kenneth was a freshman in high school when he realized he wanted to be a filmmaker. They had a project and he made a short horror film that was about 40 minutes long.

“I made it fun. We had a ghost story book and used the stories there for my short film,” he said.

The young director said he watched a lot of horror films, from Saw, The Ring, Hostel, and when he reached college, he began watching more classic films and saw different kinds of horror films and new styles of filmmaking.

The festival describes Ma as “a phantasmagorically macabre tale of loss, sacrifice, and evil” and in essence is a tragic story of motherhood.

“The world is scarier than horror films,” he said. “My inspiration was an incident from my childhood, that is scarier. “

Signal Rock, directed by Chito S. Roño, made its New York premiere. The film was the Philippine entry to the Oscars this year.

The film revolves around Intoy (played well by Christian Bables) who lives in Biri, a small island town where he is the community factotum. His family barely makes ends meet thanks to the money his sister sends from Finland where she’s been working for years. When she suddenly leaves her abusive husband, Intoy pulls every favor he can to help her win custody of her daughter.

What starts as a small slice of island life expands into a moving depiction of perseverance in a place where the only hope for women is to work in a bar or marry a rich foreigner.

Asked about the state of Philippine cinema now, Dagatan said it is healthy.

“Because the independent film industry in the Philippines is growing, there is a lot of new voices coming up and it is healthy. It is definitely growing,” he shared. “Young filmmakers like me have an opportunity for our first films because a lot of festivals in the Philippines awards grants to make these films. Even with a small budget, you can already make your own films.”

He is thankful for the opportunity to showcase his debut feature at the NYAFF.

“I was nervous showing it but I am happy at how they reacted. It’s a real privilege to be here,” he said. “This is my first time here, so I am very happy.”

Still Human tells the story of a gruff wheelchair-ridden divorcé (Anthony Wong, Infernal Affairs) who hires his umpteenth caretaker (Crisel Consunji), a Filipina who has put her dreams on hold to earn a living in Hong Kong.

Despite not speaking Cantonese, the former nurse turned caregiver gradually breaks through his rough exterior and the unlikely duo from vastly different cultural backgrounds begin to embrace their lives together through various ups and downs.

According to NYAFF, “This inspiring debut feature from director/ scriptwriter Oliver Siu Kuen Chan, (and produced by Fruit Chan), surprises and charms with its universal blend of humor and pathos. It also shines an important light on the often invisible, marginalized communities and citizens of Hong Kong, highlighting diversity and humanism.”

“It seems to tell the world that in Hong Kong when we celebrate our diversity, we move forward together,” Consunji said in her speech last night.

The 34-year-old Consunji came to Hong Kong when she was only 23 years old as a Disney stage performer and vocalist and later became an early childhood educator. She had no film experience at all when she was tapped to star opposite Wong, a Hong Kong cinematic legend.

At the post screening Q and A, Consunji shared that she found out about the auditions for the role after some of her friends sent her a copy of the open casting call posted on Facebook. She decided to try out, not expecting that director Oliver Chan Siu-kuen would choose her for the leading role.

Born and raised in Manila, Consunji was recruited by Repertory Philippines when she was only 10 years old and for the next 13 years, she worked alongside professional actors onstage.

As she was finishing her dissertation for her grad school degree, an opportunity to work in Hong Kong Disneyland as a singer presented itself. The initial contract was for eight months. Consunji has been living there for the past 11 years.

“It is a story of a migrant Filipino worker. I wanted to bring out the story of hundreds of thousands of my fellow countrymen going abroad with dignity and integrity, to give them an empowering voice,” Consunji added. “That was my motivation in coming to film.”