IN last week’s issue (Jan. 6, 2021), the Asian Journal editorial team shared some of the popular MDWK Magazine stories from the past year — such as commemorating the history of social justice during Filipino American History Month to influencer and entrepreneur Patrick Starrr’s mission to defy beauty standards.

We continue this week with the second part of this reflection with more features that were widely shared and talked about. To read these selected features & other stories in their entirety, visit: https://www.asianjournal.com/category/magazines/mdwk-magazine.

Fall/winter 2020 was a moment for  lola  (grandmother) representation with “Blue’s Clues & You!” introducing Josh’s grandma and making  bibingka. In November, Disney launched its first-ever Christmas advertisement, a three-minute animated short featuring the Filipino tradition of parol-making as part of its 2020 festive campaign “From Our Family To Yours.” The heartwarming and tear-jerking animated short is inspired by the themes of traditions, family togetherness, and nostalgia. It introduces two new characters: Lola (grandmother) and her granddaughter, alongside Mickey Mouse, a beloved toy that was gifted to Lola as a young child by her father in 1940.

The advert was created by Disney EMEA’s in-house creative team, led by Angela Affinita, director of brand marketing and creative, in partnership with Flux Animation Studios.

“The ad for me is such a great reflection of the bonds between families. We all have unique traditions, especially at Christmas, so being able to draw on my own experience with my Filipina grandmother and the making of star lanterns to bring a level of authentic creativity is pretty special,” Affinita said in an interview with  The Drum.

Throughout the year, we featured books and their authors, among them: “You Can’t Do It Alone: A Widow’s Journey Through Loss, Grief, and Life After” by Maria Quiban Whitesell; “We Dream of Space” by Erin Entrada Kelly; “Once Upon a Sunset” by Tif Marcelo; “Weird But Normal” by Mia Mercado.

“I know the landscape for not just Filipino authors, but people from all kinds of marginalized groups, has opened up and will continue to do so because literature needs to reflect our entire society. That’s what our world and bookshelves should look like,” Kelly said in an interview with the  Asian Journal.

When stage actor Josh Dela Cruz was announced as the new host for the “Blue’s Clues” reboot, a wave of nostalgia kicked in for kids who grew up watching Nickelodeon in the ‘90s. On top of that, the new generation of Fil-Am would see someone who resembles them on screen. A moment of pride came at the start of season two, in particular, when Josh got to introduce viewers to Filipino culture and another family member, a  lola  (a grandmother played by veteran Filipina-Canadian actress and singer Carolyn Fe).

“Growing up, I never saw anyone on screen that I connected with,” Dela Cruz said. “I never saw myself reflected in a positive way — it was either the foreigner, the villain, or the joke. I get to be myself. I’m just Josh and I also am Filipino.”

Opening a restaurant would seemingly be among the last things to do during a pandemic, but Petite Peso — with Ria Barbosa as its executive chef and vice president of culinary and business partners Robert Villanueva and Tiffany Tanaka — launched in Spring 2020 in the humble 275-square-foot space in downtown LA’s Jewelry District that once was home to Charles Olalia’s Rice Bar. Conceptualized as “Filipino food with thoughtful ingredients,” Petite Peso features rice bowls, morning pastries and comfort food dishes based on available seasonal ingredients.

“Developing the menu was the fun part. We talked about what we like to eat and our favorites growing up — that identity of being born there [in the Philippines] and moving here to the U.S. with your whole family. We have to have the Filipino hits while keeping guests in mind. We’re not going to have  dinuguan  right off the bat, but the starting lineup is full of dishes we feel really strongly about and tie back to family memories,” Barbosa said.

Since 2015, 41-year-old actor Nico Santos has portrayed Mateo Liwanag, a gay, undocumented Filipino sales associate on NBC’s “Superstore.” Though it’s a comedy, “Superstore,” now entering its sixth and final season, tackles the serious issues of the moment, whether it’s Mateo’s immigration status, the rights of workers at the big-box store, equal pay or the environmental impact of shopping.

Whatever future projects come Santos’ way, he is not afraid of being typecast as a queer Asian man and getting those parts.

“It’s so hard to work in this industry period and it’s so hard to reach this level of work. For me, I don’t feel like I’m being pigeonholed at all. I’m actually only interested in playing parts that look like me, that speak like me, and that speak to my experience. I don’t feel like I’m being stifled as an actor by not exploring ‘other types of characters,’” he said.

Only two hospitals in the city of Los Angeles received the highest five-star rating from the Centers for Medicare & Medicaid Services (CMS) in January 2020 — and one of them is in the heart of Historic Filipinotown and is run by a Filipina American. Formerly known as the Silver Lake Medical Center, the Los Angeles Downtown Medical Center (LADMC) along West Temple Street has undergone a complete transformation in the last 12 months under the leadership of Vicki Palana Rollins, the first Fil-Am to co-own a hospital system in the United States.

Rollins, along with business partner William Nelson, purchased the struggling medical center after it went into bankruptcy in February 2019.

“When you lead an organization, whether it’s health care or any other type of business, you want to be on top of your game and just be fair to everybody and do the right thing. Then nothing is really complex at the end of the day. It’s the people who make things complex,” Rollins said.

In a year marked by reopenings and shutdowns, it all began in Los Angeles on March 15, 2020 when Mayor Eric Garcetti ordered the temporary closure of bars and nightclubs that don’t offer food, movie theaters and entertainment venues, and gyms and fitness centers. 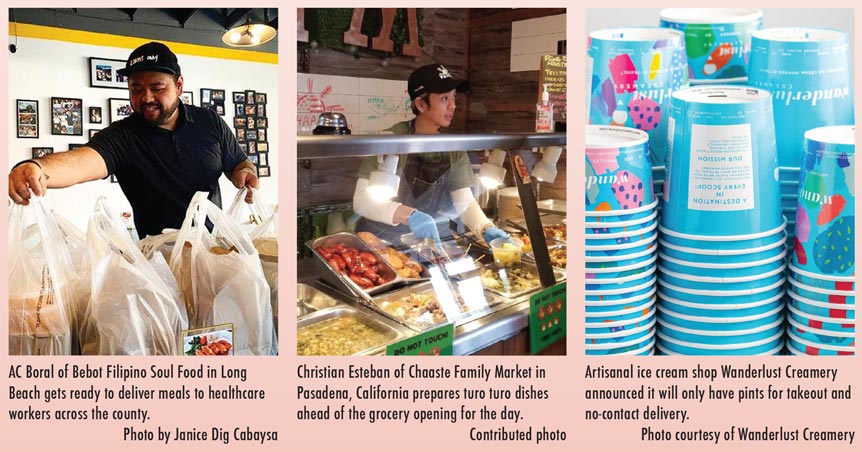 Restaurants and retail food facilities had to shutter indoor and outdoor dining and only provide delivery, takeout or drive-thru options (which still continues of this writing). Filipino American business owners shared how they had to change the way they operate or even, close temporarily. Despite the closures, the community rallied together to raise awareness of and patron businesses in the community that need the most help.

During major professional sports events of the year like the Super Bowl, the outfits the players wear off the field are talked about as well as they have unexpectedly become sources of fashion inspiration. Meet one Filipina American designer behind most of the sleek and tailored outfits that athletes don — Johanna Alba, the chief visionaire of  ALBA, taken after her last name but also meaning “ A Light Beyond Appearance.” Her Los Angeles-based bespoke clothing company bears over 1,200 high-profile athletic and entertainment clients from Magic Johnson to Terrell Owens.

“Every athlete is their own brand so it’s important for them to look the part and their image is key in that. The NFL and NBA enforced dress codes so they have to dress appropriately for every occasion,” Alba said. 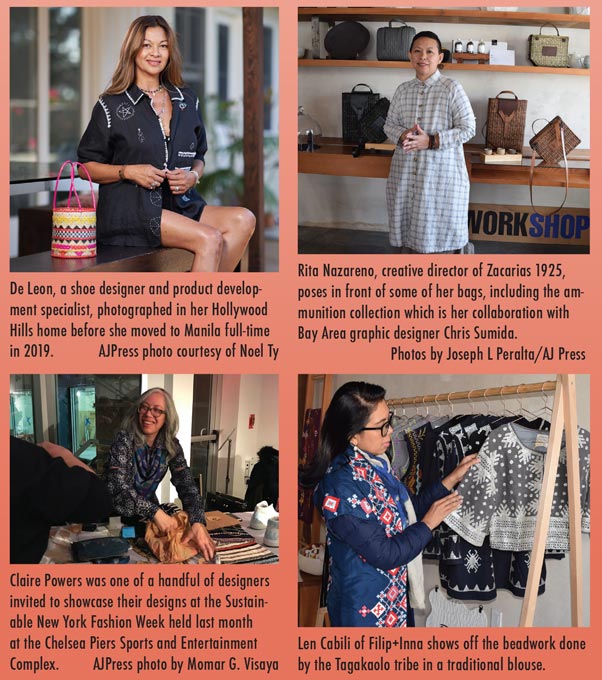 For many Filipinos globally, one way to proudly show their heritage is by wearing it on their sleeves, literally. This is the mission of several Pinay entrepreneurs and designers — as we featured in several issues. They include: Reese Fernandez-Ruiz of Rags2Riches, Len Cabili’s Filip+Inna, Zacarias 1925 by Rita Nazareno, KINdom by Claire Powers, and Angkan by Carol de Leon.

In addition to promoting the textiles of the Philippines on a global stage, they also have an added purpose to either promote sustainability or to give back and empower the artisan communities.

“Seeing these Filipino designers shows that creativity runs in our blood, whether it’s fashion design, art or music. The talent is definitely there in our genes. I believe it just needs to be on a more globalized level,” de Leon said.

Experience a true Filipino Christmas: Celebrating the festive spirit of home with the joyful mini parols