Dr. Robyn Rodriguez, who has more than two decades of experience as a professor at UC Davis, is taking her expertise into the world of entrepreneurship

The world of academia can be a wonderful place to hone all aspects of social justice: developing theory, interpreting history, and developing solutions for historically disenfranchised communities.

Most importantly, it’s a place to incubate the world’s future leaders and greatest minds.

But like all institutions, academia has its limitations that can stifle the boundlessness of social innovation. And, especially as a woman of color, those limitations can inspire divergence from the traditional into the progressive.

Robyn Magalit Rodriguez — a Filipina American professor of Asian American Studies at the University of California, Davis — has been an invaluable mentor and figure for college students for years.

As the first Pinay to chair UC Davis’s Asian American Studies department, she in 2019 founded the Bulosan Center for Filipino Studies, a hub inspired by the eminent Filipino artist and activist Carlos Bulosan that seeks to enrich the Filipino American experience, Rodriguez told the Asian Journal in a recent interview.

But now, Rodriguez is departing from the world of academia into the world of entrepreneurship to expand her platform as a tribune for current and future generations of social justice leaders and facilitators.

“I’m really more interested in growing and innovating alternatives as opposed to fighting back against this institution and carving space within it,” Rodriguez explained. “Which, again, I value that [the university system] has seen and clearly are working toward that work, but I just don’t want to spend that energy anymore. I really want to start again and craft new kinds of institutions that can actually serve our community.”

Though Rodriguez speaks fondly and proudly of her work in establishing a Filipino American studies center at UC Davis, she has decided to leave her post (starting in 2023) to seek other means of mentorship and education.

“I’ve increasingly become more acutely aware of how really limited this space for Filipino studies is in universities. It’s incredibly constrained,” she said, recounting how difficult it was for the university system to establish the center and maintain it.

“You can talk to any Filipino scholar — it is almost impossible to get funding for Filipino studies and research,” she said, noting that the university’s offerings for Filipino scholars almost operate like a token system, saying “once they fund one Filipino you have to wait a few cycles before they consider funding another.” 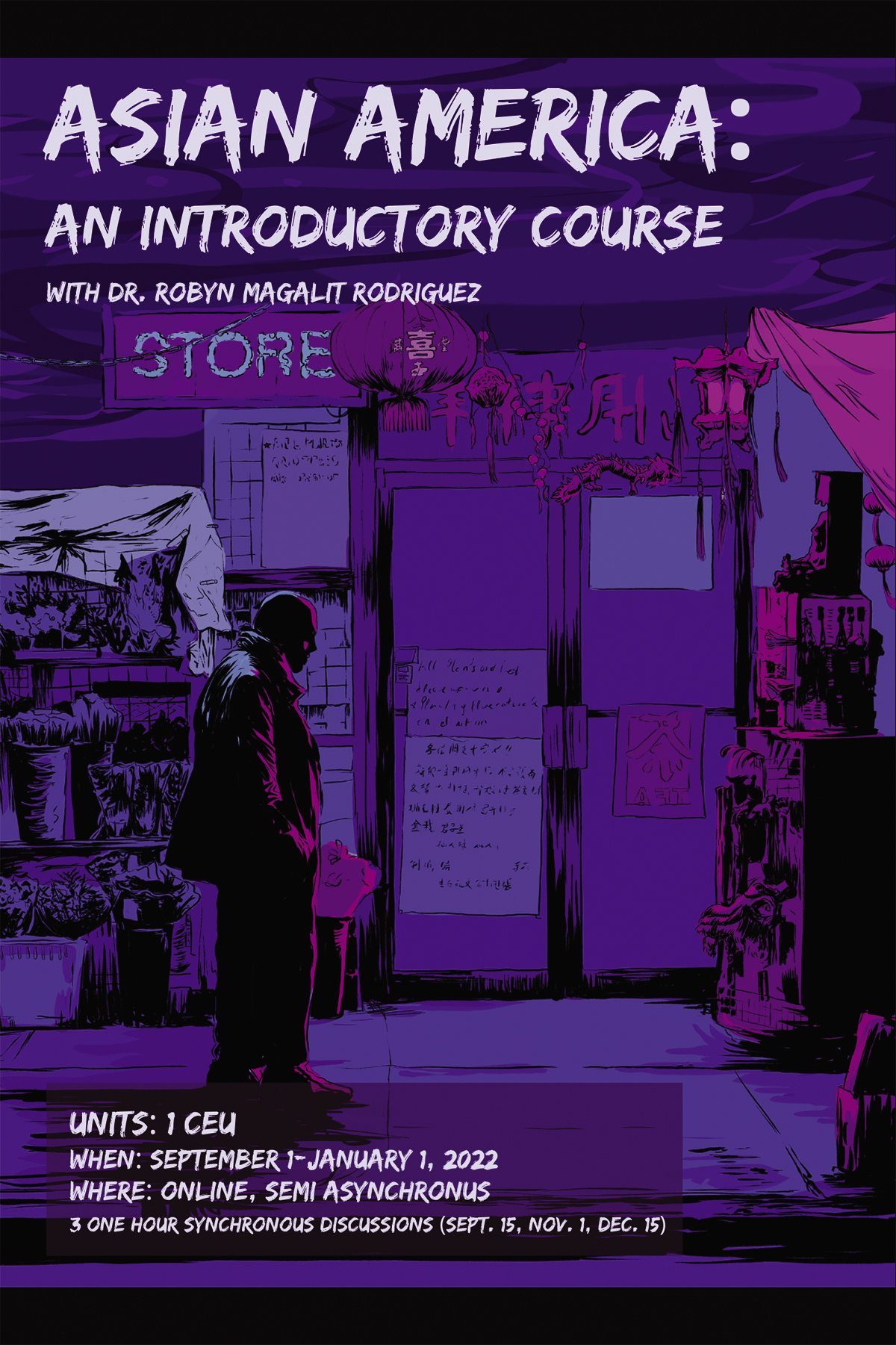 In addition to authoring several books on Asian and Asian American issues — including the newly released “Contemporary Asian American Activism: Building Movements for Liberation” on which she collaborated with Diane C. Fujino  — Rodriguez launched School of Liberating Education, which is described as a “self-paced mini-course on the history of Asian American activism.”

She said that she plans to devote a large chunk of her time to the program after she leaves her teaching post at UC Davis and “really start to recruit dynamic BIPOC [Black, Indigenous, and people of color] educators to help me in creating and delivering this curriculum for the community.”

“I do sometimes worry for younger folks because history, now, is as far as you can scroll on a Google search. There’s so much knowledge that ends up getting lost,” she said of the difficulties of accessing resources on Asian American history. “We want this to be a kind of invitation to take a deeper dive into these histories and learn from them because that’s how activism can start to incubate: through learning about our histories.”

In addition to the mini-course, Rodriguez has also started a podcast called “Spitting Fire: Doktora Robyn Speaks,” where Rodriguez chats with friends and colleagues about topics like community organizing but also about emotional health issues like grief, aging, and motherhood.

As a mother, Rodriguez naturally has the gift of fostering spaces designed to enrich the community. In August 2020, Rodriguez’s son Amado Khaya Canham Rodriguez tragically passed away at the age of 22 while working alongside indigenous communities in Mindoro, Philippines — a solidarity mission that was part of a larger, life-long goal of advocating for Filipinos in the Philippines.

In honor of her late son, Rodriguez is establishing the Amado Khaya Foundation, a non-profit that seeks to support community organizers and foster a community based on wellness amid the nearly impossible task of helping make the world a safer, better place.

“Filipinos I think that we have to be better about stewarding the planet. I do think that while we may be coming out of Covid, that hasn’t diminished the climate crisis and what that’s really going to mean for all of us,” she said. “You know, we devote our entire lives in trying to raise awareness around issues compounded by violence against our communities, whether its violence that comes from lack of clean air and water to police brutality,” Rodriguez shared.

The tenacity with which Rodriguez speaks is incredibly contagious, particularly when she talks about this new program and the other many ventures she’s invested in. In an age where marginalized communities are hungry for more resources made for and by members of those communities, the emergence of this new chapter for Rodriguez is kismet.

Academia, particularly elite academia, has come under scrutiny recently for poor investment in opportunities for educators of color and the programs and initiatives they seek to establish for students of color. Last year, the prominent social academic and activist Cornel West shared his resignation letter from Harvard University in which he decried the “decadence in our market-driven universities.”

For Rodriguez — an immigrant from the Philippines who has created the groundwork to create a space for Filipino Americans — that disparity in administrative investment is somewhat unsurprising, given the rocky history of the University of California system.

Throughout the 1960s and 1970s, the admission of Asian students into UCs soared. But Asian admission plummeted in the 1980s when, according to an investigation lodged by the U.S. Dept. of Education, found that at least one UC campus — Berkeley — was capping the admission of Asian students. (Then-UC Berkeley Chancellor Ira Heyman apologized for the drop but denied their university was deliberately limiting Asians.)

In 1996, the UC Board of Regents was among the most profound proponents of Proposition 209, the California measure that ended affirmative action in the higher education system. While total student enrollment increased after that, the number of Black and brown students at the undergraduate level plummeted.

So rather than push for a seat at a table — a table allegedly constructed on the basis of keeping communities of color at bay — Rodriguez is carving out her own, one that is built for those historically ostracized communities.

And the time for that table to be set is long overdue, particularly at a time when discrimination and violence against Asians continue to be a problem long after interest in the Stop Asian Hate movement waned in 2021.

Recent stories of multiple Asian women and elderly Asians being attacked and killed place completely unneeded stress on a community that seemingly never has time to process one incident before another one props up.

As a Filipina whose focus has been on Asian American studies, Rodriguez said that nobody should be surprised by the sudden rise in these crimes.

“Neither the hate nor the violence that [the Asian community] has suffered has been surprising. As scholars and community organizers, back in December of 2019 when Covid began propping up and news reports were fixated on China, we were all on the edge of our seats waiting for what the blowback was going to be,” she explained.

Rodriguez shared that the Stop Asian Hate movement is an opportunity for Asians to shift the narrative of the community, and for ethnic groups like Filipinos to help create a niche for themselves, in particular. But she hopes that this emerging era of Asian American activism makes room for nuance.

“It is exciting for me to see that there’s a new consciousness among Asian Americans, but what worries me is how the consciousness doesn’t come with the added critique of anti-Blackness. And there’s this very particularly active right-wing element in the Asian American community that cries foul when it comes to racism against Asian Americans,” she said.

Rodriguez hopes that her new path of entrepreneurship will help forge a path that does make room for critique of approaches like the model minority myth and the aid of social media that proliferates misinformation.

“The world is not the same as it was 10 years ago or several decades before,” Rodriguez said. “Clearly there’s a lot that folks are innovating right now, but it also doesn’t mean that some of the insights from the past are also still healthy today.”