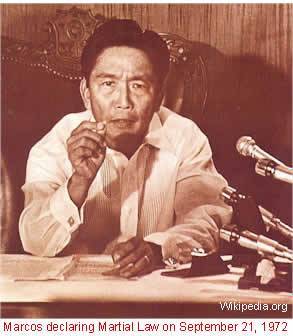 “Maraming pinahirapan, naglaho, at pinatay noong Martial Law; lumobo ang utang ng bayan na binabayaran natin hanggang sa ngayon; lumalim at lumawak ang kahirapan. Dinurog ang mga institusyong haligi ng lipunan. Naging bahagi ng diwa ng pamamahala ang korupsyon at pang-aabuso (Many were tortured, many disappeared, and many were killed during martial law. The national debt ballooned and we are still paying for it to this day; poverty grew and worsened. It destroyed the institutions that supported our society. It bred abuse and corruption in the government),” Robredo said.

“These truths know no political color, but come starkly in the black and white of our lived experience as a nation Walang debate dito; nangyari ito (There’s no debate about this; it happened),” she added.

Robredo, who was a student activist during the Marcos regime in the 1970s, stressed that those who are attempting historical revisionism are “stealing the truth” from the victims of martial law.

“Those who attempt to tell us otherwise are not only merely telling a supposed version of the story: They are lying to our faces, stealing our truths from us, stealing our stories. Because without these truths and stories, we will be further divided, at mas madaling magtatagumpay ang mga pagtatangkang abusuhin muli tayo (It will be easier for them to succeed in their attempt to abuse us again),” she said.

According to Robredo, the atrocities committed during the martial law era should be retold to the next generations so it would never happen again.

“Our task is to push back against these lies at every instant. To tell the stories of Martial Law and dictatorship over and over so that this generation, and the ones that come after, may be bound tighter through remembering. To hold firm to the truth of this painful chapter of our history, and through this, forge the determination to never again let our people fall into such despair,” Robredo stressed.

“We must do this because, ultimately, our national aspirations can only be as strong as our national memory. Ngayong araw, manindigan muli tayong hindi tayo makakalimot (Today, let’s stand firm that we won’t forget),” she added.

Likewise, the Cordillera Human Rights Alliance, Women Resist Tyranny, and Movement Against Tyranny-Metro Baguio rejected the historical revisionism as they commemorated the martial law’s 48th anniversary by holding a protest in Baguio City.

“We commemorate martial law today and urge the people to rise up, continue to defy state tyranny and repression. We are challenged to live by the lessons of the Filipino people’s resistance against dictatorship,” the groups said in a joint statement.

On September 21, 1972, Marcos signed Proclamation No. 1081 which placed the country under martial law.

Marcos was ousted from power on February 25, 1986 by the People Power Revolution.