The foreign spouses and dependents of Filipino citizens will need visas to enter the Philippines, the country’s Bureau of Immigration recently announced.

“Foreign spouses of Filipinos must now secure entry visas from our Consulates abroad before traveling to the Philippines. Otherwise, they will be denied entry by our immigration officers and sent back to their ports of origin,” said Immigration Commissioner Jaime Morente in a statement.

Prior to the Inter-Agency Task Force on Emerging Infectious Diseases (IATF-EID) Resolution 60, foreigners married to Filipinos only needed to present their marriage certificates and other proof of their matrimonial relationship to enter the Philippines.

“But that is no longer the case with the issuance of this latest IATF-EID resolution,” Morente said. 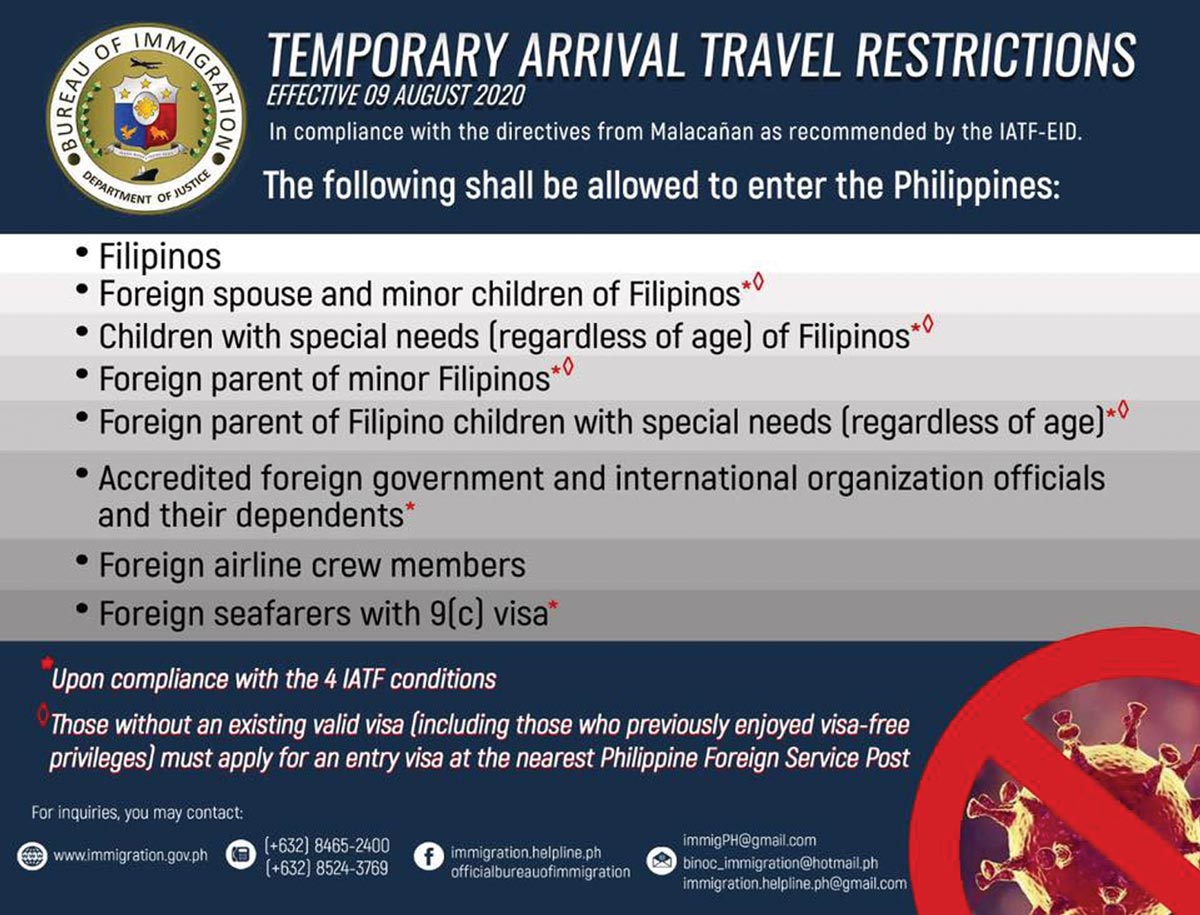 BI Port Operations Acting Chief Grifton Medina, meanwhile, said foreign spouses, dependents and parents of Filipinos who are holders of long-term visas do not need to apply for a new entry visa.

“Those aliens who already hold valid permanent and temporary resident visas which they acquired by reason of marriage to Filipinos under Section 13(a) of the Philippine Immigration Act can enter the country anytime,” he said.

He also reminded foreign spouses of Filipinos to always bring with them their authenticated marriage certificates and other supporting documents when traveling to the Philippines so they could readily present them when asked to do so by immigration officers.

“There have been many instances already wherein foreign passengers claiming to be spouses of Filipinos were turned back by our officers at the airport due to their failure to show proof of marriage,” said Medina.

No additional restrictions on international travel have been imposed by the government despite the National Capital Region being placed under a modified enhanced community quarantine (MECQ) anew.

“Existing travel restrictions remain unchanged until these are revised or changed by the IATF-EID,” said Morente.

Domestic flights are suspended under the quarantine, but international flights out of the Manila, Cebu and Clark airports are still running as scheduled.

Medina, for his part, said the country remains off limits to foreign tourists. Aside from Filipinos, only holders of permanent immigrant visas and foreign spouses, minor dependents and foreign parents of Filipino minor children are allowed to enter the country.

He added that only foreigners, overseas Filipino workers (OFWs), and Filipinos who are permanent residents or students abroad are permitted to leave the Philippines.

The quarantine classification took effect on August 4 and will be in place until August 18.
Duterte approved the Cabinet’s recommendation to return to a more stringent lockdown in response to the medical community’s plea for a time-out.

Aside from Metro Manila, the provinces of Laguna, Rizal, Cavite and Bulacan were also placed under MECQ.

Under this quarantine status, strict home quarantine will be observed in all households. There will be no public transport, domestic flights, and mass gatherings. There will also be limited transporting services for essential goods and services.

Duterte: Gov’t running out of funds amid coronavirus pandemic