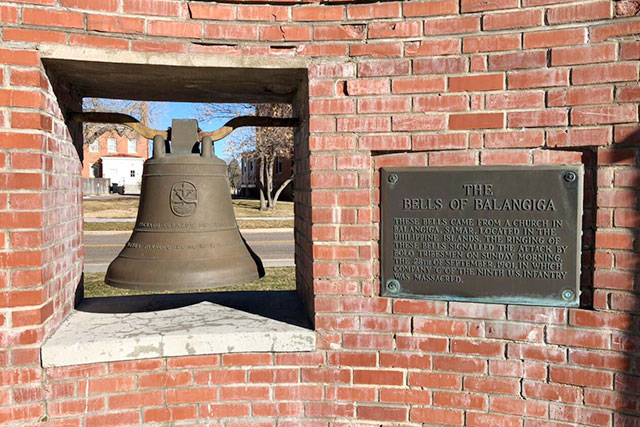 AFTER 117 years in the United States’ possession, the Balangiga bells made their way home to Balangiga, Eastern Samar.

President Rodrigo Duterte on Saturday, December 15, witnessed the turnover of the Transfer Certificate of the Balangiga Bells from U.S. Deputy Chief of Mission John Law to Philippine Department of National Defense Secretary Delfin Lorenzana. The president, then, personally led the handover ceremony of the historic bells to the people of Balangiga.

He also handed the certificate of transfer to Balangiga Mayor Randy Graza.

Duterte, in his speech, thanked the U.S. government for the return of the century-old war artifacts.

He also said that the return of the bells was possible due to “several efforts made by both Americans and the Philippines” and that no one should take credit for the return of the bells, not even him, because it was the voice of the Filipino people especially the people of Balangiga, that convinced the U.S. to return them.

“Let me be very clear on this: There are some who are front loaders and pedantic in the government. The bells are returned and it was really because of the fervent prayers of the entire Filipino nation,” Duterte said.

“But nobody can claim a singular credit for the generous act of the Americans. The bells are returned. The credit goes to the American people and to the Filipino people. Period,” he added.

According to Duterte, the homecoming of the artifacts was “truly a milestone and part of a meaningful history of the United States and the Philippines,” a vibrant chapter in the Philippine-U.S. bilateral relations.

Used to signal a historic siege during the Philippine-American War in 1901, where Filipinos killed 48 out of 74 U.S. troops, the Balangiga bells were taken as war trophies when the American forces led the Balangiga Massacre, where about 2,500 Filipinos were killed.

Duterte said the bells’ return is a “restoration of Filipinos’ dignity.”

“I am sure that our ancestors are celebrating with us here on this remarkable victory. And that it does not only bring back the glory of the town, but also contributes to the full restoration of our dignity as a Filipino,” he said.

Long wait is over

Duterte was not the first president to ask Washington to return the Balangiga bells, as reported by Rappler. Then-president Fidel Ramos in 1994 requested the same from his U.S. counterpart, Bill Clinton, but to no avail.

In 2014, an online petition signed by more than 3,000 people also urged the U.S. to return the Balangiga Bells. However, then-U.S. president Barack Obama made no mention of the matter when he visited the Philippines that year.

Duterte first demanded the bells’ return during his second State of the Nation Address (SONA) in 2017 in the presence of U.S. Ambassador to the Philippines Sung Kim.

“We know fully well that several efforts have been made by both Americans and the Philippines. It is really indeed a long and tedious process to the point that the outcome was disappointing sometimes, but the long wait is over,” Duterte on Saturday said.

The Balangiga bells finally arrived home in December 11, after making a stopover in Okinawa, Japan, where the two bells in Wyoming, and the bell in South Korea were reunited. (Ritchel Mendiola/AJPress)

Health care is where the jobs are: But what kind of jobs?