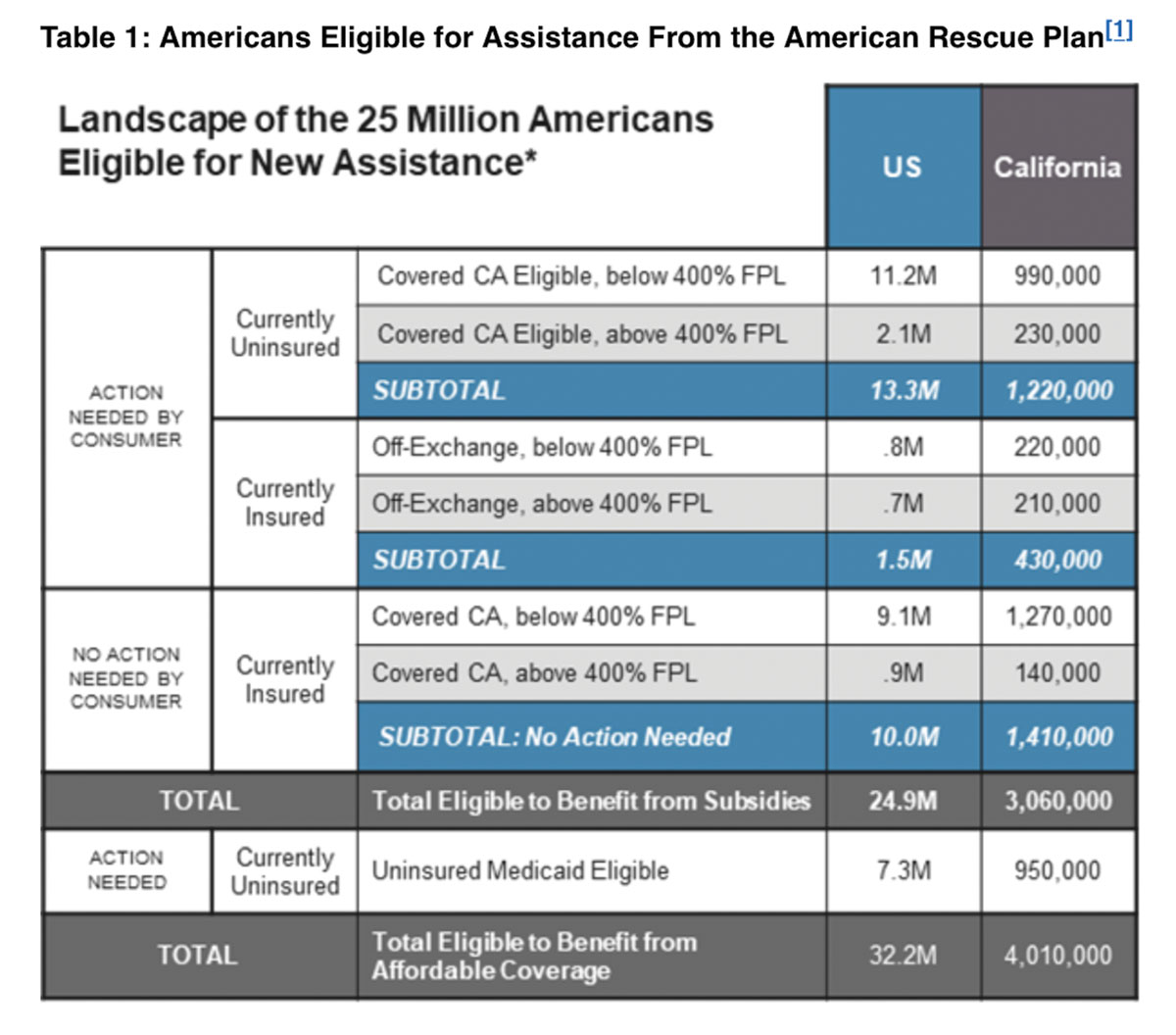 “The new and expanded financial help provided by the American Rescue Plan is a very big deal for millions of Americans,” said Peter V. Lee, executive director of Covered California. “These new subsidies will help more people get covered, lower premium costs and put money back into people’s pockets when they sign up for health insurance through the Affordable Care Act.”

Who benefits from the American Rescue Plan?

The American Rescue Plan lowers health care premium costs for people who get coverage through Covered California, or through other Affordable Care Act marketplaces across the nation, by providing new and expanded subsidies to make health insurance more affordable than ever before. A Covered California analysis finds that an estimated 25 million Americans could potentially benefit from the new law (see Table 1: Americans Eligible for Assistance From the American Rescue), including:

• Covering the uninsured – An estimated 1.2 million Californians, and more than 13 million people nationwide, are uninsured and eligible for marketplace coverage under the Affordable Care Act with even lower costs because of the American Rescue Plan.

Under the American Rescue Plan, these uninsured can get coverage that is more affordable than ever before. In California, for consumers who earn less than $32,000 a year for an individual, they will be able to either get a benchmark Silver plan for between $50 and $60 a month and virtually all would be able to get Bronze plan for a $1 a month.
“The American Rescue Plan provides the first significant boost to the Affordable Care Act in more than 10 years,” Lee said. “The new money that is available means that many people who are currently going without coverage will be able to get a high-quality plan for about the price of a few bus rides.”

An individual with an income of more than $51,000 per year currently pays an average of $1,100 a month for their coverage. Under the new and expanded subsidies provided by the American Rescue Plan, their monthly premium drops to an average of $507 – a savings of nearly $600 per month and a total of nearly $12,000 between this May and the end of 2022.

“For some Californians this means they will finally be able to afford health care coverage and get the protection and peace of mind they need in the middle of a health crisis,” Lee said. “For others it means hundreds or even thousands of dollars back in their pockets to help them afford their housing, keep their business running, or put money away for retirement.”

Syd Winlock is a small-business owner in Elk Grove and a Covered California enrollee. The new financial help available through the American Rescue Plan will lower his family’s $1,100 premium by $450 a month.

“One of the things I was looking at doing was expanding some services that we provide, and I can direct the money that we were paying for health care to that,” Winlock said. “As you guys put money back into my pocket, I’m going to put money back into the economy.”

In addition to its analysis, Covered California also laid out the steps it will be taking – including working with its contracted health insurance companies, agents and navigators, and community leaders – to effectively implement the American Rescue Plan.

While the law will potentially benefit 25 million Americans, many of them will need to act, requiring the need for a coordinated and targeted outreach efforts. The Congressional Budget Office estimates that only 10 percent of those uninsured and eligible for new subsidies will enroll, and only 20 percent of those currently insured but unsubsidized will sign up for the new benefits.

The main reasons cited for the projections are that many uninsured still believe they cannot afford coverage, off-exchange consumers are less likely to switch to a marketplace in mid-year, and that program is temporary.

“The challenges are real, and this will not be easy, but we can do better – not only for Californians, but for Americans across the country,” Lee said. “Covered California and our partners are ready to lean-in, to spread the word that new money is available that can help lower premium costs for millions.”

Covered California released a roadmap describing Covered California’s Approach to Promoting the American Rescue Plan: Target Groups and Strategic Approaches and detailed analysis of those eligible for American Rescue Plan benefits in each state, that includes an analysis of potential marketing investments for the federal marketplace and other states that would be on par with those California has historically made.

Covered California’s approach describes three strategic approaches it will undertake to reach out to and enroll as many Californians as possible:

“Time is of the essence, because every month that goes by is a month that someone could be covered or be saving hundreds of dollars on health insurance,” Lee said.

• Maintaining consumer commitment – Covered California will continue to focus on the consumer-centered tactics and strategies that it has used since launching in 2014. The focus will include new investments in marketing and outreach – totaling between $20 million and $30 million on television, radio, print and digital ads over the next few months. The statewide campaign will reach every community, with an emphasis on Hispanic, Asian and African American media outlets which represent the groups hit hardest by the pandemic and recession. In addition, Covered California will engage with key partners – insurance agents, navigators, state agencies and others at the state and local level – to reach every eligible consumer.

“While virtually everyone in Covered California will get a significant reduction in their next premium bill, we need a major effort to ensure that hundreds of thousands more eligible Californians get this help of hundreds or even thousands of dollars,” said Anthony Wright, executive director of Health Access California, the statewide health care advocacy coalition. “The more Californians are covered and who can access quality care, the sooner we can end this pandemic, and get closer to a universal and affordable system that can better handle the next public health crisis.”

“The Latino community has been hit hard over the last year. They disproportionately work in the roles we refer to as essential, and the rate at which COVID-19 has affected them has raised the importance of ensuring access to quality health care coverage – not only in Los Angeles, but across California and the nation,” said Cástulo de la Rocha, President and CEO of AltaMed Health Services. “The funds provided by this legislation will help close gaps in coverage by making it more affordable, enabling our communities to get covered and stay covered.”

• Holding health carriers accountable – Covered California is also encouraging its 11 health carriers to invest in marketing and outreach to identify “off-exchange” consumers, and those who have been recently priced-out of coverage, to let them know that they are now eligible for new financial help.  Covered California was joined at its announcement of its approach by three of the CEOs of its contracted health plans who committed to lean-in to foster the broadest enrollment possible:

“This is the right action at the right time. The American Rescue Plan will provide needed resources to those communities most impacted by COVID-19, including communities of color and low-income families,” said Greg Adams, Chair and CEO of Kaiser Permanente.

“This is the biggest step to making health care coverage real for all Americans since the Affordable Care Act was passed. Kaiser Permanente will do our part to ensure cost is not a barrier to coverage that all Americans deserve.”

“An effort like this requires coordination and teamwork, and Anthem is proud to be working with all of our states to make this successful,” said Gail Boudreaux, President and CEO of Anthem, Inc. “We’re committed to the successful implementation of this effort and we will be working with our partners to ensure all eligible Americans take full advantage of the new financial help available to them.”

“Blue Shield of California is committed to this effort because it is core to our non-profit mission to achieve universal health care coverage and it is the right thing to do at a time when so many Californians need that protection,” said Blue Shield of California President and CEO Paul Markovich. “We’re excited to work with Covered California to reach out to people in every region of the state who need coverage and those who could save money by switching to a similar plan on the Covered California exchange.”

“Covered California has deployed these tactics and strategies over the past seven years, and they are critical to making things work,” Lee said. “We stand ready to do everything we can to make the American Rescue Plan successful for as many Californians as possible, and we hope and expect the federal administration and other states will do the same.”

Californians can easily find out their benefits

Covered California will launch a new “Shop and Compare” tool on April 12 that will allow consumers to easily see exactly how they will benefit from the new law. People will be able to see how much new financial help they are eligible for in just a few minutes by entering their ZIP code, household income and the ages of the people in the household.

Those interested in learning more about their coverage options can also:

[1] Table only shows those estimated to be eligible for subsidies based on maximum required contribution percentage of household income using available administrative data (on income, age, and benchmark premiums) from California’s marketplace: the actual eligibility may differ to the extent that there are differences in the age, income, and premium costs for other states and the off-exchange from what is observed in Covered California’s data. Not shown are the estimated 1.4 million consumers who may receive higher subsidies because they are receiving unemployment insurance income. Additionally, off-exchange estimates do not include consumers who may be enrolled in coverage that is not ACA compliant (e.g. “grandfathered” plans), who may also benefit from new subsidies.