As the United States continues to struggle with the lack of test kits and medical equipment to combat the new coronavirus outbreak, the country now leads the world with the most confirmed cases, according to the latest update from the Johns Hopkins Coronavirus Resource Center.

The numbers keep rising and despite efforts from governments to impose stay-at-home measures, hospitals continue to overflow and medical resources are quickly running out as health care professionals demand more federal aid to treat the growing number of patients.

What’s more, is that the damning numbers only reflect those who have been tested as many people in the U.S. — especially those who live in lower-income areas and/or don’t have health insurance — don’t have access to the limited testing locations.

The severe human influence of the COVID-19 pandemic is two-fold: the virus itself continues to stun medical professionals as they work tirelessly to learn more about in hopes of developing a cure, and widespread reports of acts of hate, violence and harassment of Asians and Pacific Islanders (APIs). 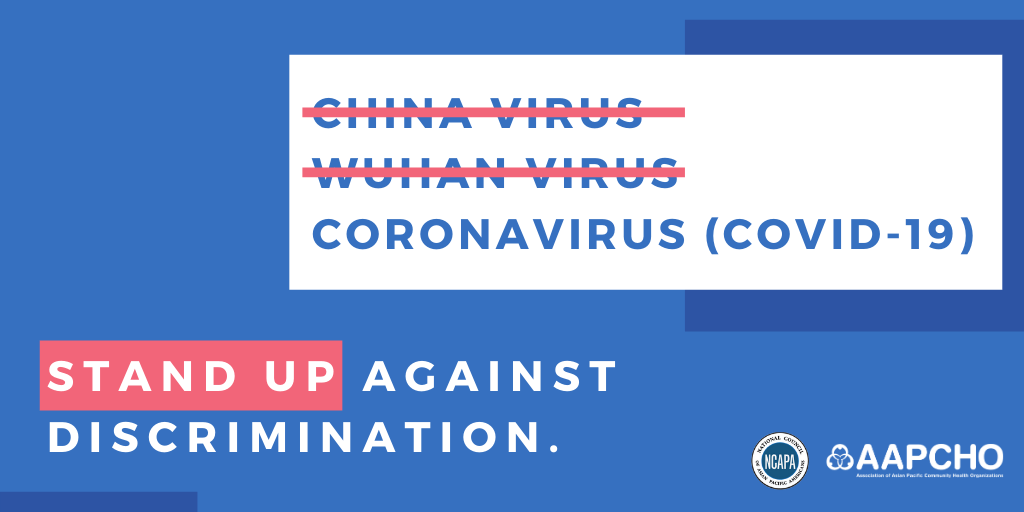 In a teleconference hosted by APIA Vote and TDW+co, a coalition of API political and community leaders shared their thoughts on the rising instances of anti-Asian discrimination and provided solutions to suppress discrimination of all kinds, especially during a time in which the well-being of millions of humans hangs in the balance.

“Over the last month, there has been a steady increase (in incidents) and as COVID-19 conditions intensify, we are concerned that these kinds of anti-Asian attacks will only continue to go up,” Greg Orton, the national director of the National Council of Asian Pacific Americans (NCAPA) said.

The exact number of such incidents, however, is unclear for many reasons. In addition to incidents that are legally dubbed hate crimes, a majority of the incidents being shared across social media involve verbal harassment as seen in videos in which people call the victims “chink” or blame them for the virus itself.

In the cases of violence, another reason that there may be underreporting of these events may be because of victims’ hesitance to report these cases to authorities. (In Los Angeles County, victims may report any acts of hate to the county health and human services hotline 2-1-1.)

This issue poses a significant problem and can stifle the effort to provide adequate health care to those at risk of contracting the virus, Adam Carbullido, director of policy and advocacy at the association of Asian Pacific Community Health Organizations (AAPCHO) said. In other words, the rise of anti-Asian sentiments instills a collective sense of danger if one is seeking medical health.

“The COVID-19 pandemic has stretched health centers, and our entire health care system, beyond capacity. Racism and xenophobia targeting Asian Americans make it more difficult for health care professionals to provide care, and for families to feel safe to seek the care they need,” said Carbullido. “We encourage everyone to continue to seek the care they need and to call their providers before visiting, as many have adjusted their operations to manage the crisis. Viruses don’t discriminate—we must stand together to fight this global public health crisis.”

Much as been written in the Asian Journal and other news outlets about the patterns of anti-Asian harassment and violence amid the coronavirus crisis, and as the virus spreads and claims more lives, the trend of anti-Asian sentiments detailed across social media and various report centers also rages on, catalyzing many pushback efforts from the API community.

President Donald Trump’s efforts in containing the spread of COVID-19 have come in the form of promises for economic recovery and mitigation of actual cases, but so far, there has not been a substantial solution from the White House to combat anti-Asian discrimination.

U.S. Rep. Judy Chu (D-Monterey Park) remarked on the dangers of using the names “Wuhan virus” and “Chinese virus” to describe the COVID-19 virus and criticized the president’s usage of the term during press conferences and on Twitter.

“Donald Trump is just fanning the flames of xenophobia by insisting on calling it the ‘Chinese virus,’ despite the fact that all responsible health leaders have warned against that term because it causes stigma,” Chu said, name-dropping Dr. Anthony Fauci, director of the National Institute of Allergy and Infectious Diseases; Robert Redfield, director of the CDC; Alex Azar, secretary of Health and Human Services and the World Health Organization (WHO). “The danger of this anti-Asian bigotry is what led us in CAPAC to take action immediately.”

And one of the ways in which CAPAC is sounding the alarm on anti-Asian bigotry is through legislative solutions. Chu is one of the 124 cosponsors on a new House resolution put forth by Rep. Grace Meng (D-New York) that officially denounces anti-Asian sentiments amid the coronavirus outbreak.

“Asian Americans, like millions of others across the nation, are worried about the coronavirus; however, so many Asian Americans are also living in fear following the dramatic increase of threats and attacks against those of Asian descent,” Meng wrote in a statement on Wednesday, March 25. “The House must take a strong stand against the sickening intolerance, bigotry, and violence that is leaving a terrible stain on our nation’s history, especially during this moment of an unprecedented public health crisis.”

The long history of anti-Asian attitudes and behaviors goes back to when workers from China and the Philippines first came to the U.S., helping to build the nation’s railroad system and work in the farms of the Central Valley. Pandemics and global health crises like the Asian flu of the 1950s and the SARS outbreak of the early aughts trigger those same bigoted sentiments.

But in the era of cultural justice, Asian Americans have been fighting back, and in a big way.

“But what’s been even more remarkable is seeing how quickly the Asian American community has come together to push back against the harmful rhetoric coming from the White House,” Chu remarked. “Not only did we have elected leaders and community leaders speak out, but we had celebrities, journalists, business leaders, and everyday Americans come together to oppose this xenophobia.”

As previously written in the Asian Journal, the force with which Asian Americans have wielded in response to the racism and discrimination has sparked campaigns like #RacismIsAVirus, which Filipina Broadway star Diane Phelan founded and has garnered wide participation from hundreds of thousands of Asian Americans and allies.

The influence of the API community which pushed back against the president’s usage of the “Wuhan virus” as a descriptor led to a tweet in which the president seemed to acknowledge the problematic insinuation of the misnomer: that Asians are to blame for the spread of the virus.

“It is very important that we totally protect our Asian American community in the United States, and all over the world,” Trump tweeted on Monday, March 23. “They are amazing people and the spreading of the virus is NOT their fault in any way, shape, or form. They are working closely with us to get rid of it. WE WILL PREVAIL TOGETHER!” (Klarize Medenilla/AJPress)

The US now has the highest number of coronavirus cases globally, reaching over 100,000