As households across the country begin to receive invitations to participate in the 2020 Census, Filipino American organizations and leaders in Los Angeles County are holding a week of action to encourage community members to fill out the questionnaire.

Between March 12-20, individuals will receive a letter in the mail with instructions on how to complete the decennial count, whether by paper, phone or online. It is the first time the latter option will be made available.

Led by the Filipino Complete Count Committee of LA County — a coalition comprised of Fil-Am organizations, elected officials, community leaders and business owners — the weeklong activities started on Saturday, March 14 with simultaneous gatherings at the Pilipino Workers Center (PWC) in Historic Filipinotown and at sites in Long Beach/Carson and Artesia where speakers discussed what’s at stake for the community and trained attendees on how to conduct census outreach through door-to-door canvasing or by phone banking.

Larger-scale events that included canvassing to nearby businesses and homes had originally been planned but were downsized after concerns about public health and weather conditions. Attendees were also encouraged to tune in online.

“The Filipino Complete Count Committee is launching a week of action to get the word out in English and Tagalog that we all need to participate and be counted in the census,” PWC Executive Director Aquilina Soriano Versoza told the Asian Journal at the We Count LA census kick-off at the Kenneth Hahn Hall of Administration on Thursday, March 12.

The census is intended to count people living in the United States, regardless of immigration or citizenship status. It contains nine questions, such as the number of people who live in the household and demographic information, including their sex, names, dates of birth, and races. Families are reminded to also count children, especially babies, who are among the groups that risk being undercounted. 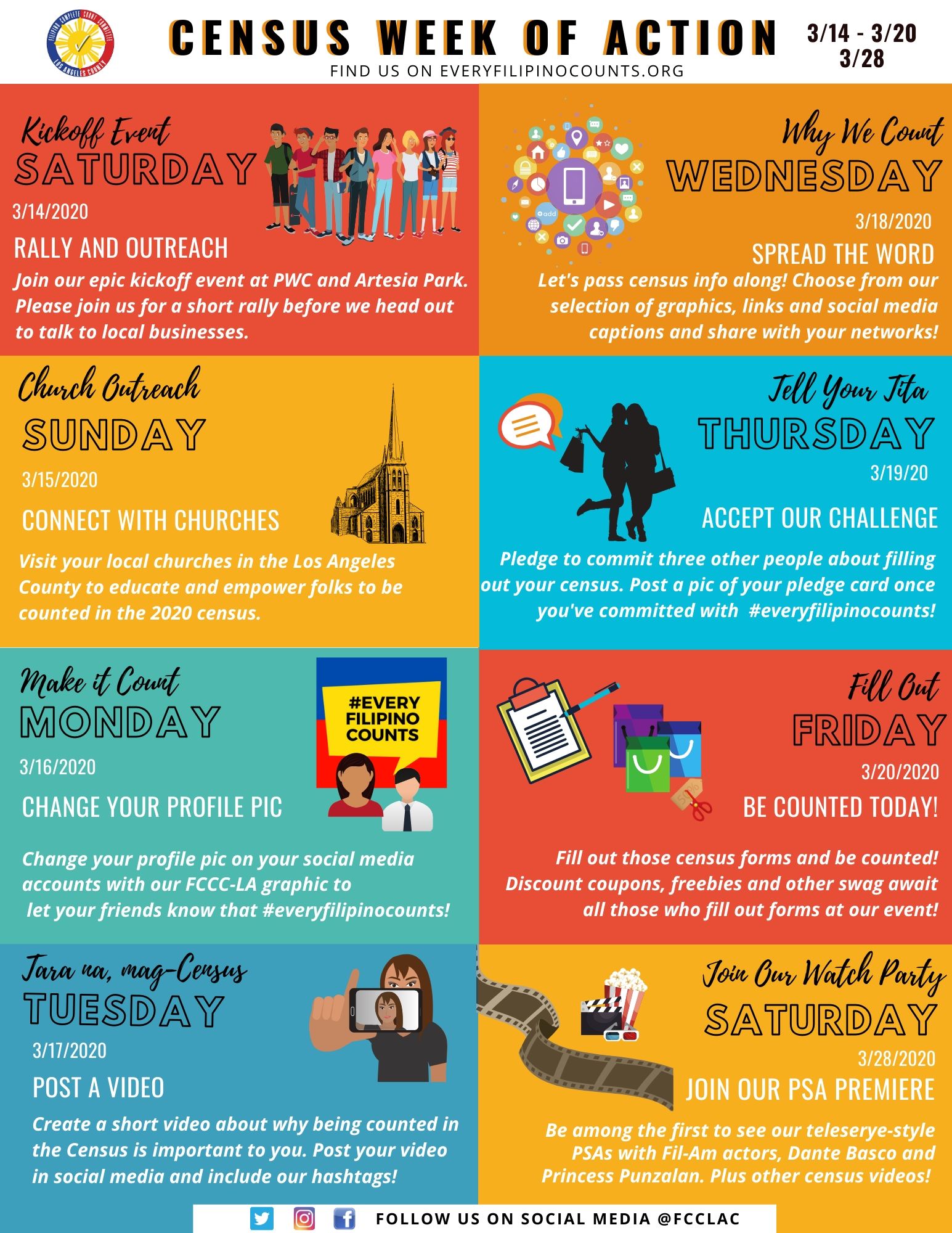 Throughout the week, the committee has scheduled themed days:

• Make It Count Monday (March 16) to change profile photos on social media with a committee-made graphic and the hashtag #EveryFilipinoCounts;

• Tara Na, Mag-Census Tuesday (March 17) to create short videos about why being counted is important;

• Why We Count Wednesday (March 18) to spread census information to personal networks;

• Tell Your Tita Thursday (March 19) to pledge to commit three other people to fill out their forms;

• Fill Out Friday (March 20) to complete the forms. The committee is working with LA-based retail and restaurant partners to provide discount coupons who do so.

There will also be a watch party on Saturday, March 28 (location and further details to be announced) to debut teleserye (soap opera)-style public service announcements for the census, featuring Fil-Am actors like Dante Basco and Princess Punzalan.

The Complete Count Committee was launched last October with the mission to increase Filipino participation for the count ahead of Census Day on April 1, during which people should fill out their forms based on their address on that day. Though, some exceptions apply to special count areas, such as college dormitories or prisons.

Soriano Versoza also reminded community members that there is no citizenship question on the final form, which had been a contentious issue for the past two years.

“That’s absolutely not true. There is no census question on the census. It’s only nine questions to fill out so it’s also very quick and easy to fill out and the information is secure,” she said.

The information is confidential and protected under federal law and cannot be shared with other government agencies, the U.S. Census Bureau said as all bureau staffers take an oath to protect information collected.

“The information available will only be like the total numbers in one area, for example, of Filipinos. That’s important because if we aren’t counted in a neighborhood, they’re not going to give as much resources for the Filipino community. They might not give us resources in language, things like that,” Soriano Versoza added.

The census helps determine how the federal government will distribute over $675 billion to states through programs, such as Medicare, Medicaid, Title I grants to public schools, and the Supplemental Nutrition Assistance Program.

Though the paper questionnaires are only available in English and Spanish, census invitations will include an insert in 12 languages, including Tagalog, inviting respondents to go online or by phone. Additional resources are available in 59 non-English languages, braille, and large print.

According to data retrieved from the 2018 American Community Survey, there are more than 4 million Filipinos in the United States. California is home to 1,651,933 Filipinos, making them the largest Asian and Pacific Islander (API) group in the Golden State.

The We Count LA initiative, comprised of community-based organizations representing LA County’s diverse communities, also encourages individuals to report any false news or social media posts on its website at www.wecountla.org. The Bureau does not gather any sensitive information, such as credit card or social security numbers.

For households that haven’t responded by early April, they will get a reminder postcard and eventually a paper questionnaire weeks later if no response has been received. From April 20 to 27, households will get a final reminder postcard before census workers start knocking on doors to gather responses from May to July. The state population counts, which help determine the apportionment of seats in Congress, are due by Dec. 31, 2020 and will be delivered to the president.

Princess Cruises to suspend all voyages over virus concerns

2020 Census Analysis: Asian New Yorkers are being undercounted based on latest self–response rate

Sen. Cortez Masto: AAPI participation in the 2020 Census will be critical