FILIPINOS make up 18% of the Asian population in the United States, according to a new report by the Washington-based polling firm Pew Research Center.

“A record 23 million Asian Americans trace their roots to more than 20 countries in East and Southeast Asia and the Indian subcontinent,” it said Thursday, April 29.

“The 19 largest Asian origin groups in the United States together account for 97% of the nation’s total Asian population,” it added.

Based on Pew Research’s analysis, there are 4.2 million Filipinos living in the United States as of 2019, making them the third-largest Asian origin group in the country. 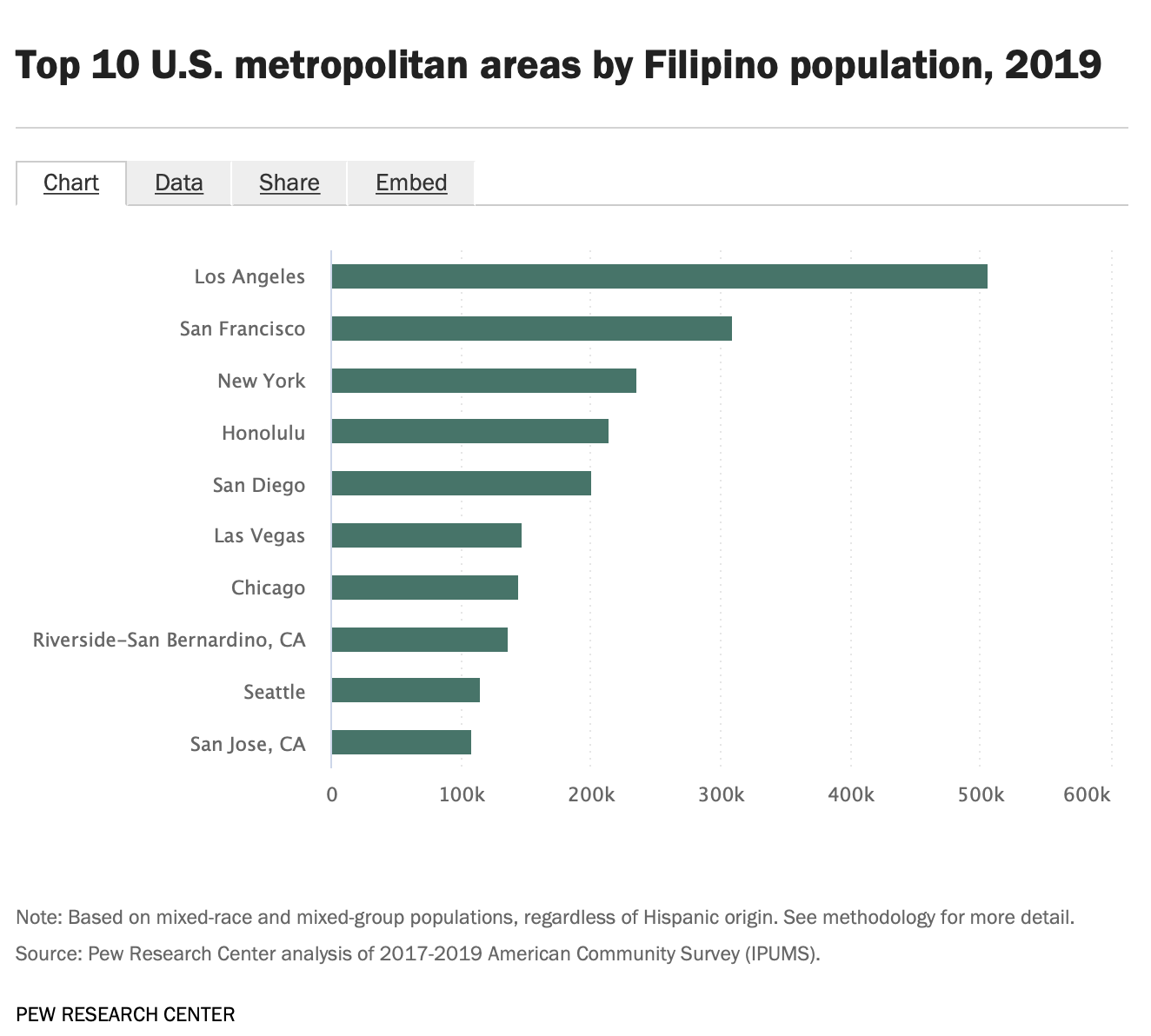 Distribution
Nearly half of the U.S. Asians (45%) live in the West, with nearly a third (30%) in California alone, Pew Research noted.

“California had an Asian population of roughly 6.7 million in 2019, by far the nation’s largest,” it said.

It added that the majority of the U.S. Asians (55%) lived in the five states — California, New York, Texas, New Jersey, and Washington.

According to Pew Research, Asians made up about 14% of the 10.5 million undocumented immigrants in the U.S. in 2017.

Meanwhile, Korea was behind the Philippines with 150,000 undocumented U.S. immigrants.

As of 2019, 72% of all U.S. Asians were “proficient” in English, said Pew Research.
Of the nation’s overall Filipino population, 84% were English proficient.

The polling firm defined proficient English speakers as those who speak only English at home, or if they speak a non-English language at home, they indicate they can speak English at least “very well.”

“About a third of U.S. Asians (34%) speak only English in their homes. The remaining 66% speak a language other than English at home,” it said.

Tagalog and other Filipino languages were found to be the third most commonly spoken non-English language among Asians at 9%. It followed Chinese (34%), and Hindi (13%).

Pew Research data showed that about a quarter of Asian Americans (27%) live in multigenerational households, with Asian immigrants (29%) “slightly more likely” to live in households with multiple generations under one roof than U.S.-born Asians (23%).

Asian Americans were also found to have a lower homeownership rate than the U.S. public overall at 59%.

However, Pew Research noted that the homeownership rate is on the rise among Asian Americans, increasing from 53% in 2000 to 59% in 2019.

Furthermore, the polling firm said Asian immigrants were “slightly more likely” to be homeowners than U.S.-born Asians, at 60% and 56% respectively.
In the Fil-Ams community, 61% are homeowners, while 39% are renters.

Pew Research pointed out that Asians are less likely to live in poverty than Americans overall.

Among Fil-Ams, 7% of them are said to be living below the poverty line in the U.S.

The poverty rate of U.S.-born Fil-Ams is higher than the foreign-born at 7% and 6%, respectively.

“Mongolians (25%) had the highest poverty rates among Asian groups, while the lowest rate was among Indians (6%),” said Pew Research.

Pew poll: 69% of Filipinos satisfied with how democracy is working

What ails us? The pursuit of understanding health issues among AAPIs

The wage gap between rich and poor increases among Asian Americans