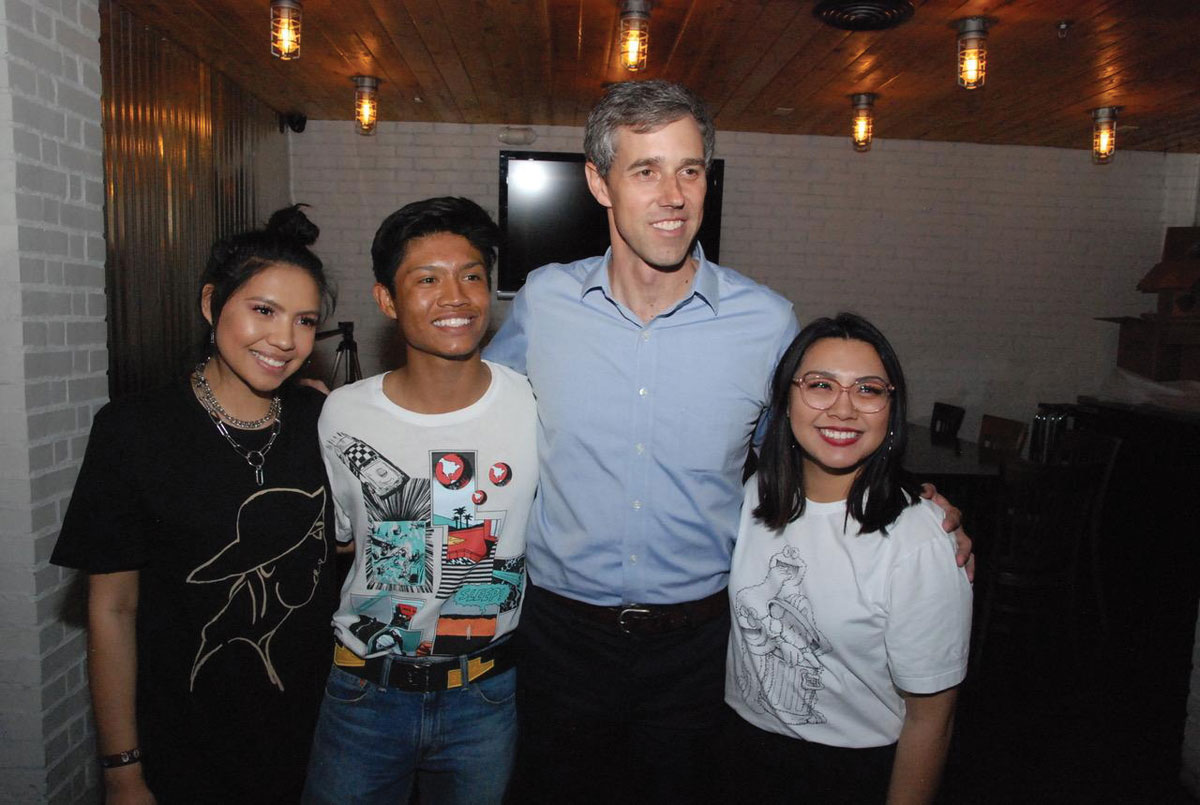 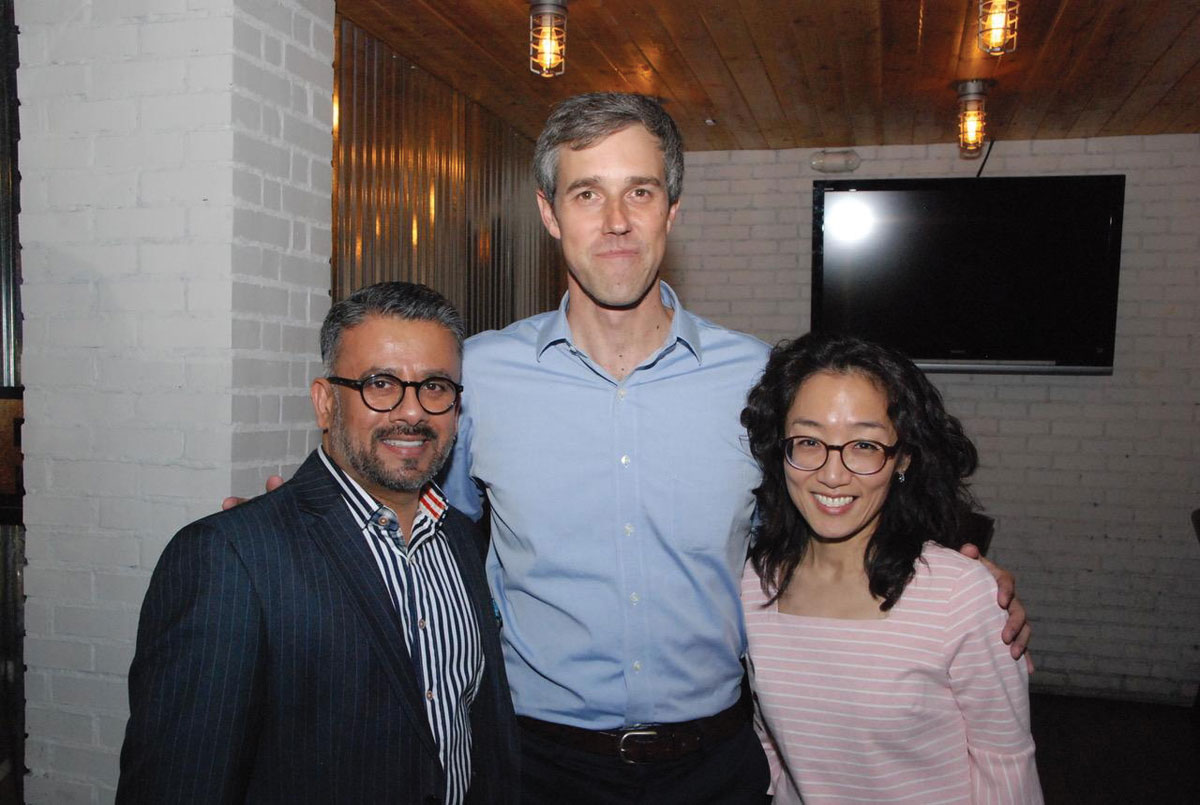 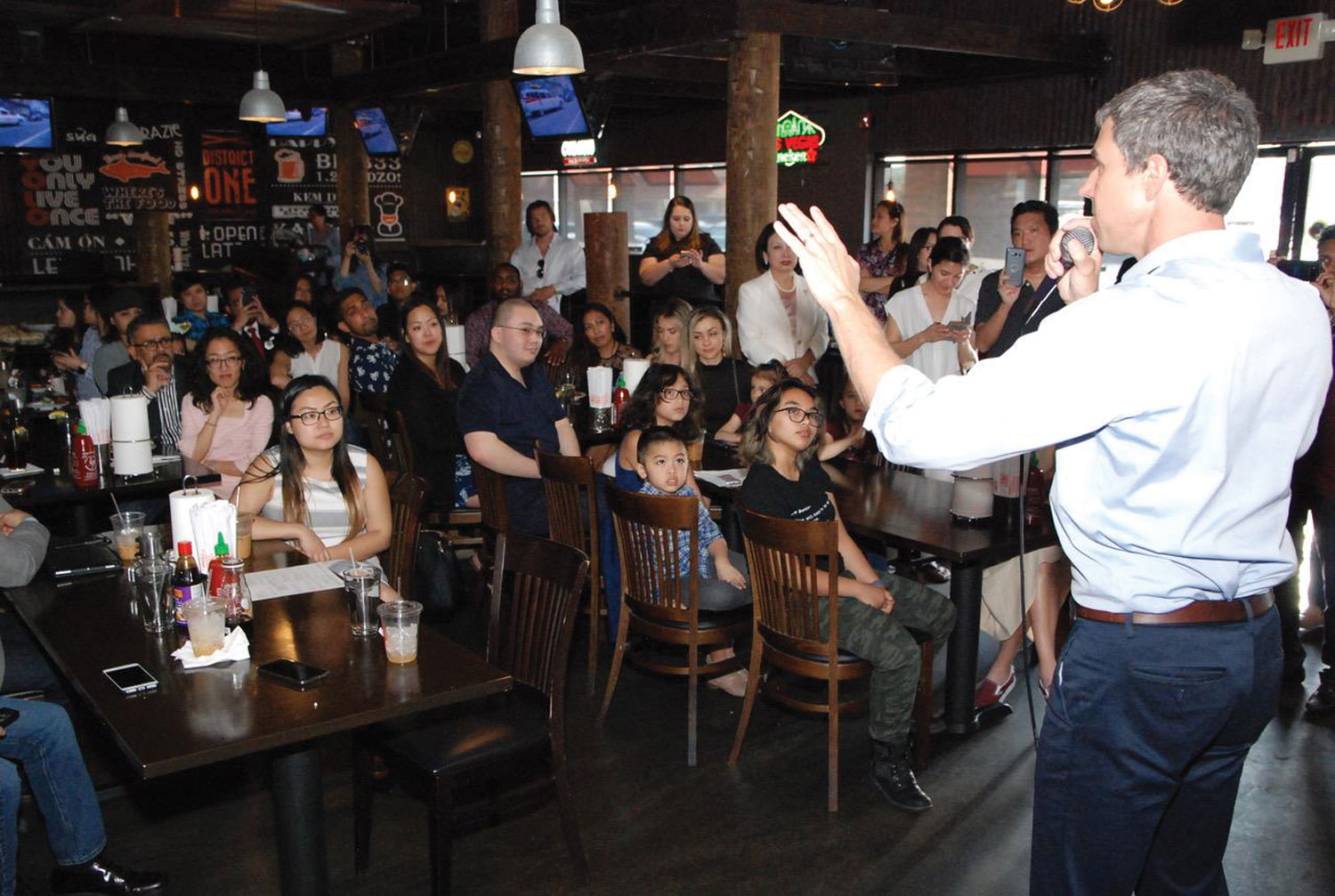 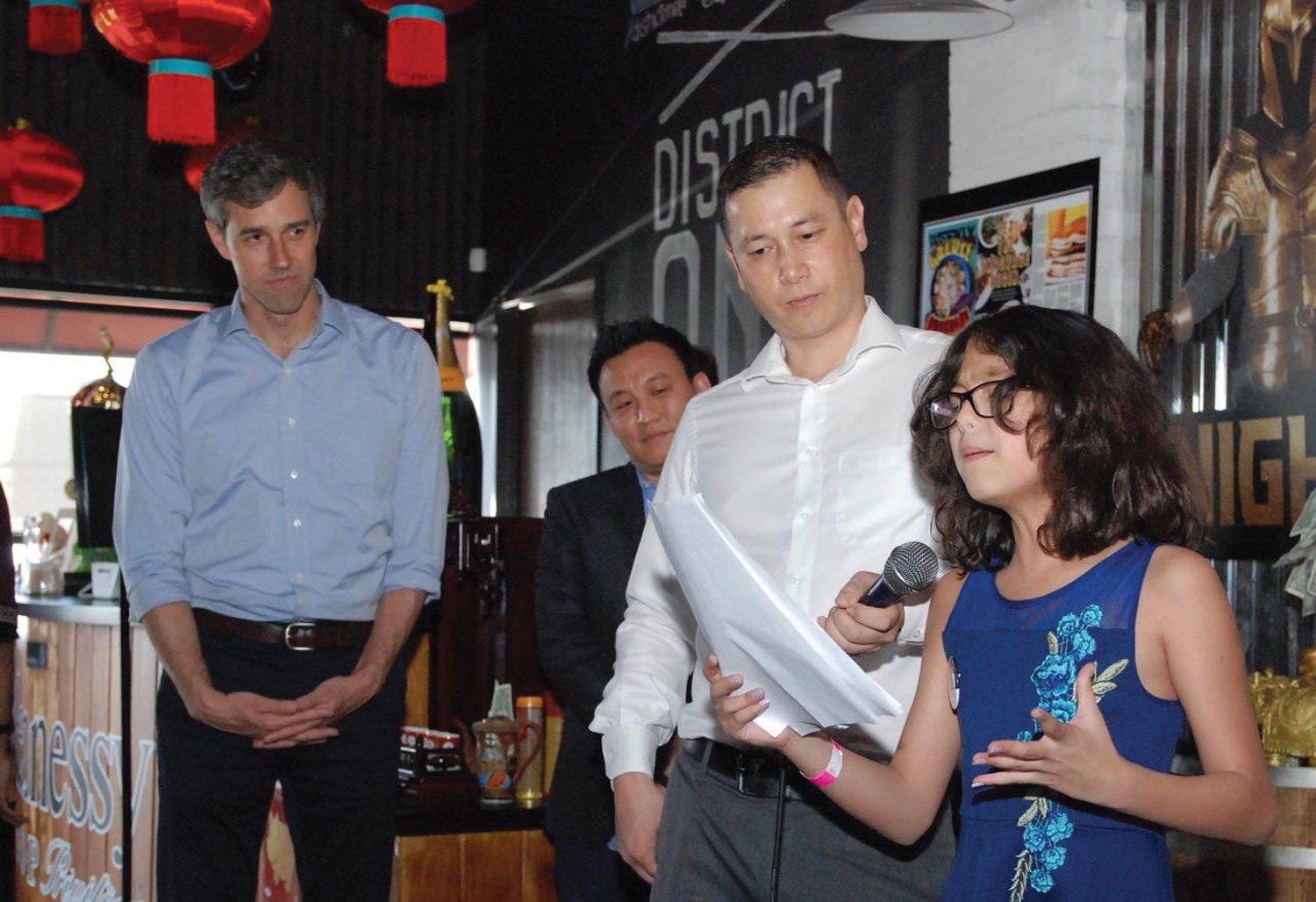 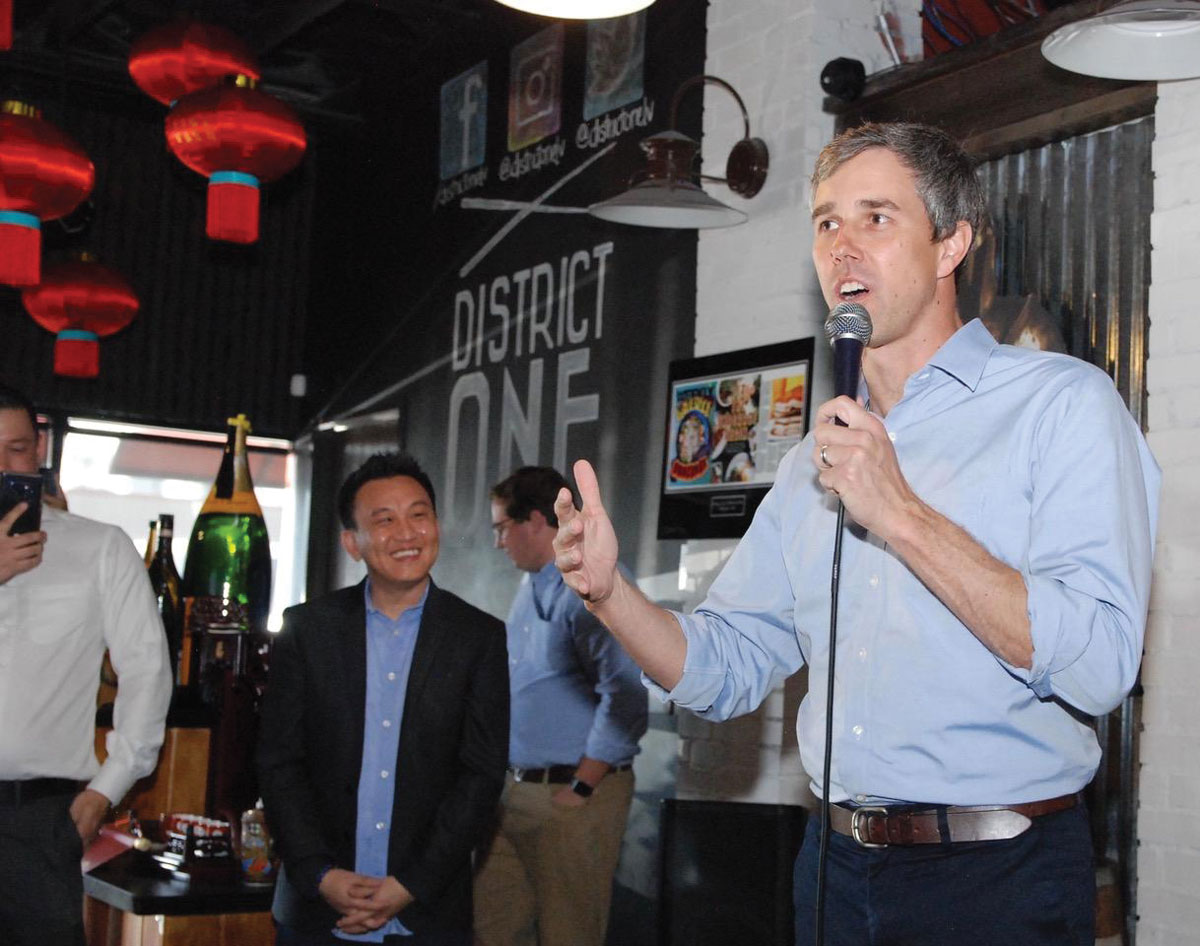 With Nevada as a swing state, Democratic presidential hopefuls are starting to campaign here, particularly in the Las Vegas area.

AAPIs are estimated to account for 10 percent of Nevada’s electorate and have shown to be a key swing vote in major races in recent years.

O’Rourke spoke on a range of topics, such as climate change, public education funding, student loan debt and gun control. He was met with several questions from the audience, including one from a Filipino-American high school senior named Xavier, who asked how the candidate would ensure Fil-Am voices are heard given that they are the fastest-growing minority in the state.

“There’s a reason that in our first full day in the state of Nevada, running for the presidency on the 10th day of this campaign, I’m listening to you and taking your question,” O’Rourke said. “I would ask in the spirit of your question that you help me and guide us to make sure that we deliver for you, for others in the AAPI community, other Filipino Americans in Las Vegas and [those] who are in Nevada and are throughout this country. I have no hope of understanding things from your perspective unless we first have that conversation. Tell me what our needs are.”

O’Rourke started his speech by saying that his run for the presidency comes at a “defining moment.”

“I come at a time of historic division and polarization and hyperpartisanship in this country,” O’Rourke told attendees gathered at District One in Chinatown. “I’m running in a way, not to divide or denigrate or demean anybody… I couldn’t care less…who you voted for last time for president, whether you can vote at all because of your age or criminal conviction or your immigration status. The fact that you are my fellow American and human being is all that counts and matters now at this moment.”

“Student loan debt is the one kind of debt that you will never shake until you pay it off or until you’re in the grave. Literally, you’ll be paying that for the rest of your life until it’s settled,” he said.“I think the first step is to stop digging the hole to ensure that community college is free for all Americans — that we ease the transition into apprenticeships, working with a union, learning a trade or a skill for in demand, high wage, high value, unfilled jobs that we have all over this country today.”

President Donald Trump earlier this month released a 10-point proposal to reform the Higher Education Act, which includes a limit to student loan borrowing and eliminating public service loan forgiveness and instead extend loan forgiveness to all students pursuing any career.

“I want to make sure that if you have student loan debt right now, that we work with you to forgive that debt, you’re going to dedicate some part of your life to public service,” O’Rourke added.

He called for investing in public educators which would “produce a return far and above the initial cost.”

With nearly 40,000 people who died from guns in the United States last year, O’Rourke said that legislators find “the political will to pass sensible gun legislation like universal background checks or ensuring that no weapon designed, engineered, and sold in the United States military to kill people as great a number as humanly possible is sold into our communities.”

He also suggested locker laws that keep children away from adults’ firearms and red flag laws “so that someone is a danger to themselves or someone else in their lives we ensure that we get them help to protect their loved ones and those in the community,” he said.

He fielded several questions from the audience, including one about his loss to Texas Senator Ted Cruz last November. With the national attention on that race, O’Rourke seeks to build on that momentum in this presidential field.

“Texas is a state that for so long has been written off or taken for granted — too red for Democrats to compete in and too red for Republicans to worry about,” he responded. “Though we did not win, we were able to overcome, transcend the barriers put in our place that ranked Texas 50th in voter turnout in the nation.”

In addition to touching upon the various issues, O’Rourke said he brings a certain authenticity to the race.  “You will not see me read prepared statements, you will not see me saying the best or the most tested or the well-written thing that perhaps some others might,” he said. “But you will see me speak from the heart, from my experience and the shared experience of those who share their stories with me, their perspective, their lives to inform this campaign and the service we want to provide.”

Enjoyed spending the afternoon holding a town hall with a group of incredible leaders from Las Vegas’ Asian American and Pacific Islander community. Thoughtful discussion about how we can make sure everyone in this country is heard, represented, served, and fought for. pic.twitter.com/COvSsNBbEl

Earlier on Sunday, Beto drew crowds to Arandas Taquera and a local coffeehouse and met with the Mujeres Network. The night before, he was at a “house party” hosted by a supporter from Summerlin.

Prior to Las Vegas, O’Rourke made visits to Iowa, Wisconsin, Michigan, Ohio, Pennsylvania, New Hampshire and South Carolina since announcing his candidacy on March 14.

The former congressman, who served on the El Paso city council prior to that, joins a crowded Democratic field in the 2020 race to the White House in 2020, with Sanders, Gillibrand, Gabbard, Castro, California Senator Kamala Harris, New Jersey Senator Cory Booker, Minnesota Senator Amy Klobuchar, and South Bend, Indiana Mayor Pete Buttigieg among the contenders.

O’Rourke, Harris, Warren, Castro and Klobuchar are slated to appear at the National Forum on Wages and Working People in Las Vegas on Saturday, April 27 hosted by the Service Employees International Union (SEIU) and the Center for American Progress Action Fund.

“We will be back in Nevada many, many times over continuing the conversation, continuing to learn,” O’Rourke told supporters on Sunday.

‘I Am a Filipino’ among James Beard Foundation Book Award finalists