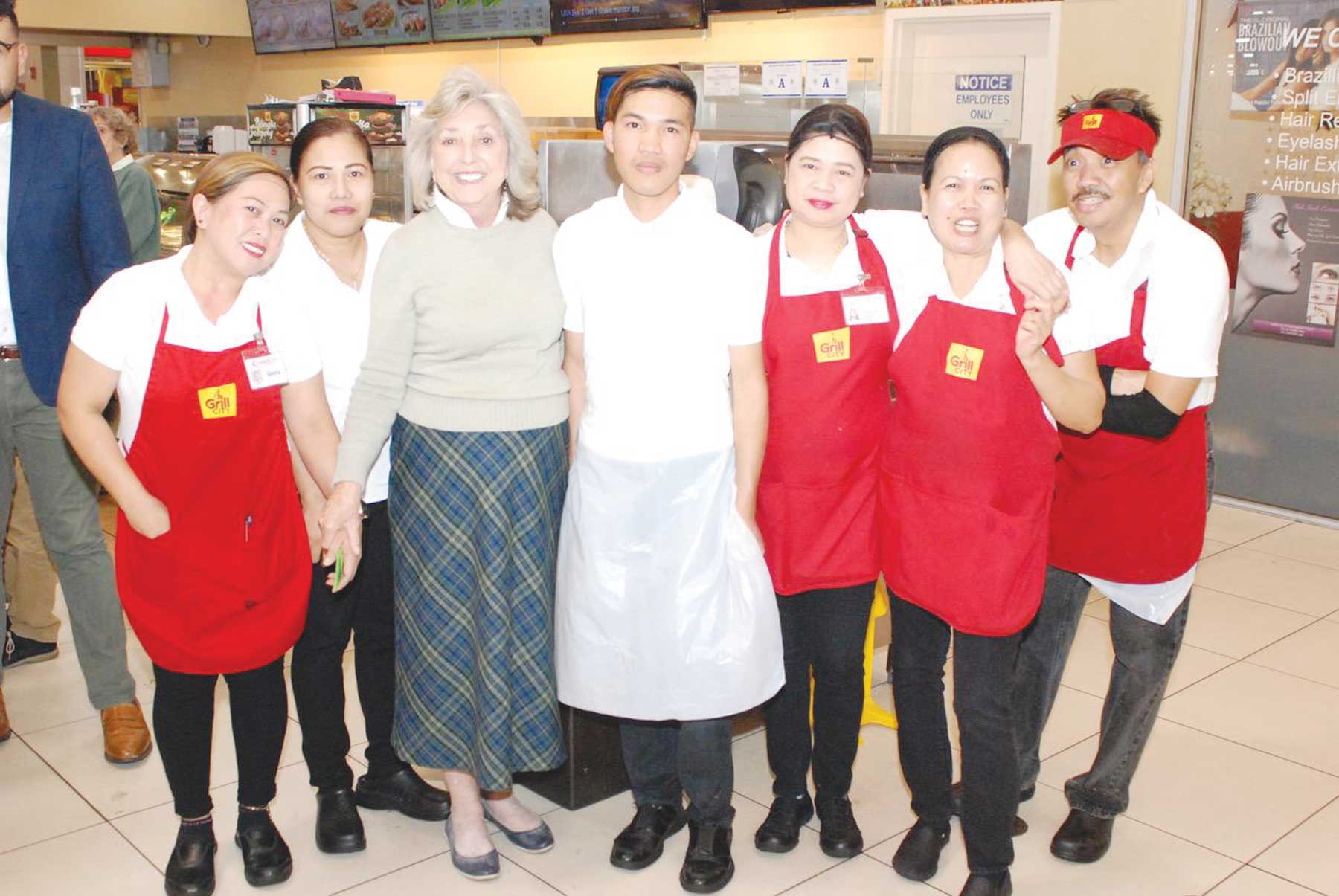 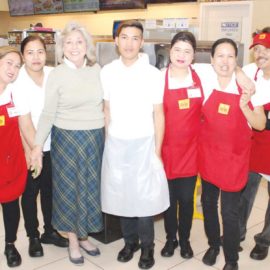 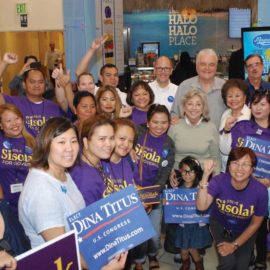 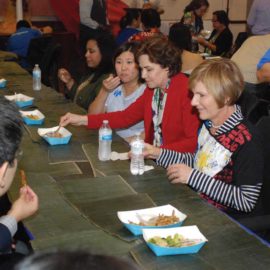 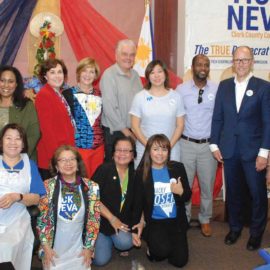 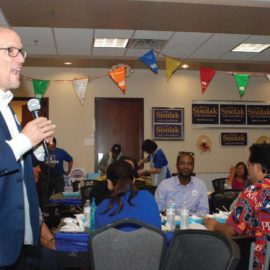 Rep Titus with the staff of Seafood City. 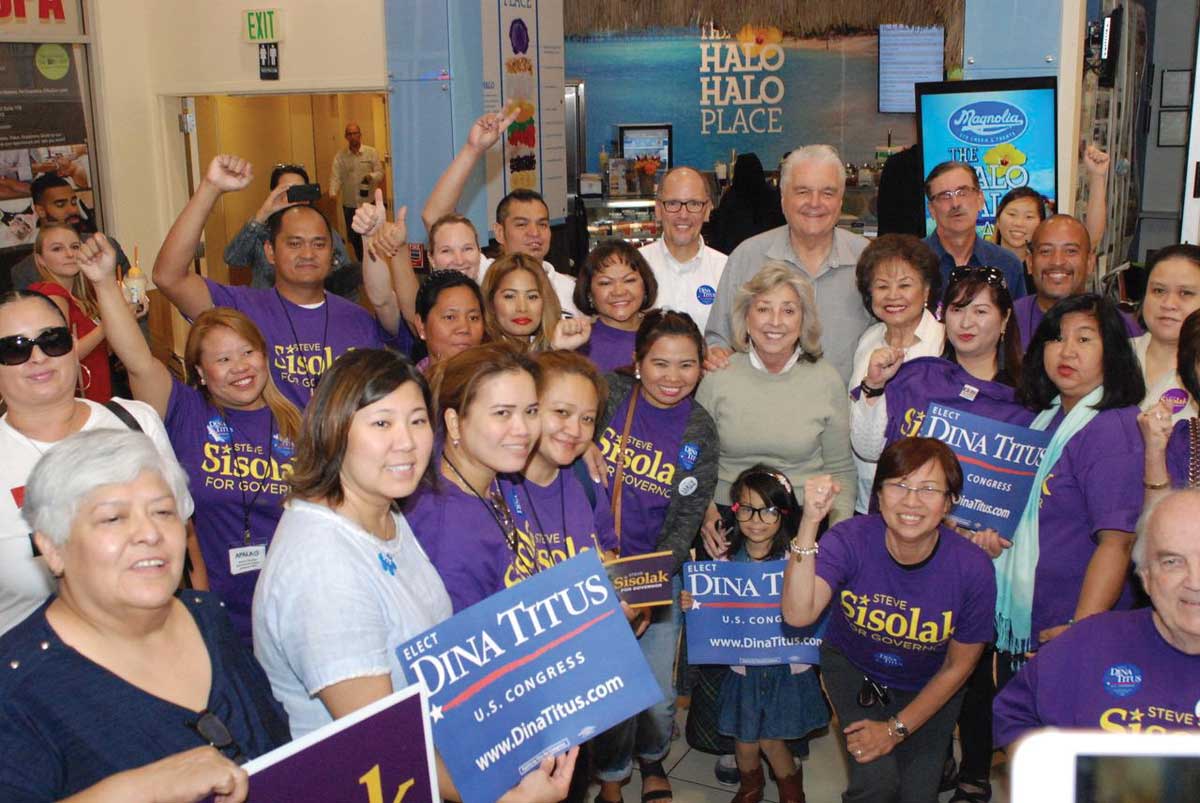 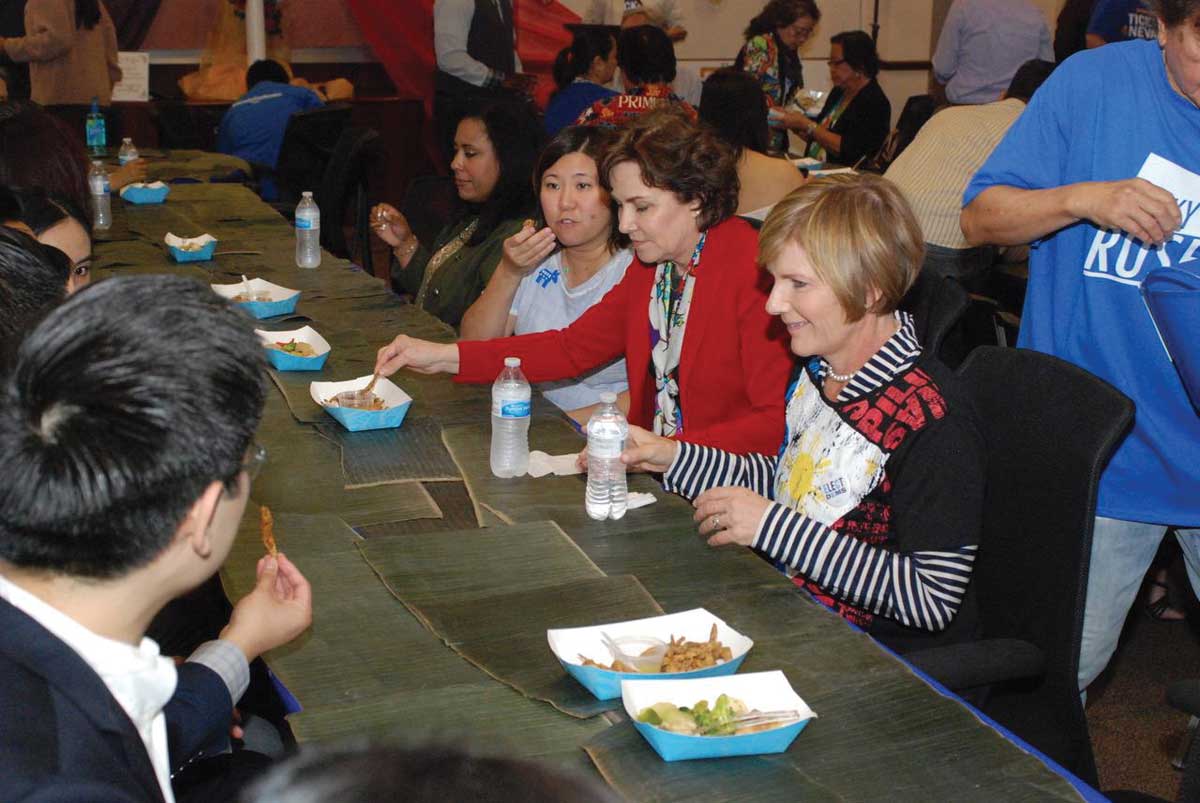 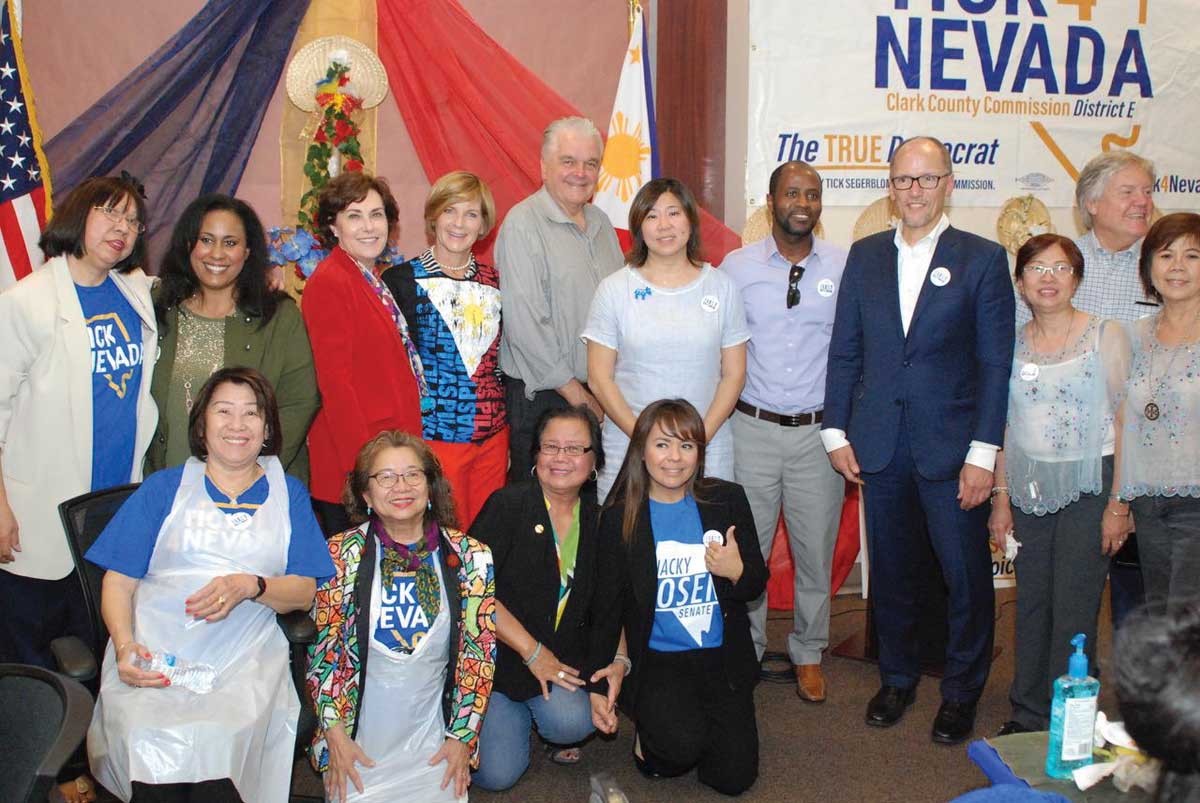 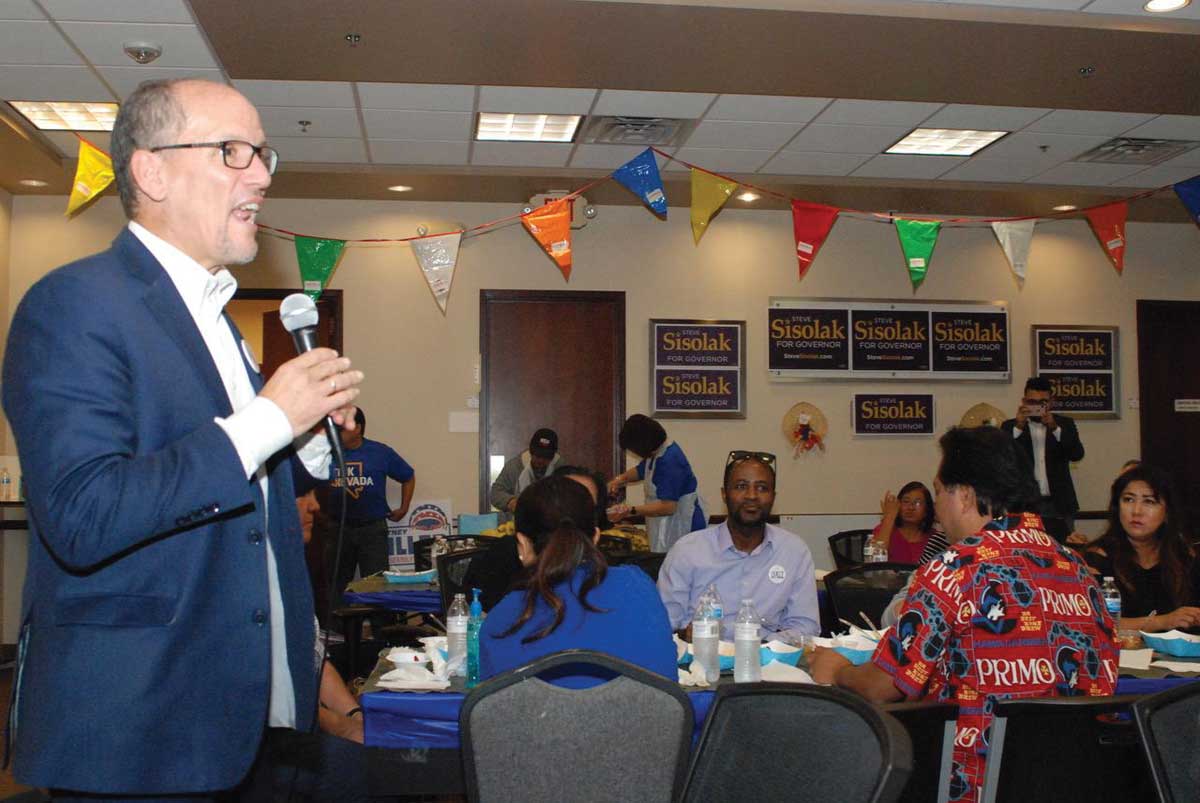 Democratic National Committee Chair Tom Perez was in Las Vegas over the weekend to campaign for Democratic candidates down the ballot, including Steve Sisolak for governor and Rep. Jacky Rosen for Senate.

With the November midterm elections approaching in less than three weeks, this past weekend in Las Vegas was packed with get out the vote events for candidates down the ballot.

Asian Americans and Pacific Islanders (AAPIs) comprise 10 percent of Nevada’s electorate and have shown to be a key swing vote in major races in recent years. Because of this, both parties have been courting this demographic leading up to November 6.

A new survey released by APIAVote and AAPI Data revealed that nationwide, 48 percent of AAPI voters are “more enthusiastic” about voting in this year, up 20 percent from the last midterm in 2014. Filipinos at 92 percent were recorded to be the group with the highest intent to vote.

On Sunday, October 14, Democratic National Committee (DNC) chair Tom Perez and vice chair Rep. Grace Meng were in Las Vegas to visit the AAPI community and campaign for candidates in some of the most competitive races in the country.

“The AAPI vote can really make a difference in the state,” Perez told the Asian Journal.

“Anyone with an immigrant experience, such as the AAPI community, who observes the divisive politics of Donald Trump, Dean Heller and Adam Laxalt, understands that we need to elect leaders who unite people. We need to build bridges of opportunity, not walls of fear. That is why I see so much energy.”

The day kicked off at the field office in East Las Vegas with around 20 volunteers being welcomed by Perez, Meng, Sisolak, and Titus.

“It’s invigorating. There’s so much energy in the community. There’s an understanding that in order to have opportunity for everyone, we’ve got to elect Steve Sisolak as governor, Jacky Rosen to the Senate, Susie Lee for Congress…and we’ve got to vote up and down the ticket,” Perez told the Asian Journal.

Filipinos are considered the largest AAPI group in Nevada. According to the latest American Community Survey (ACS) released in September, there are 169,462 Filipinos in the state.

“What this administration is trying to do on every aspect of immigration, whether it’s what they’re trying to do to DREAMers, what they’re trying to do to absolutely cut legal immigration. I thought the Republican Party was the party of family values,” Perez told the Asian Journal. “With all their efforts to divide and separate families, that couldn’t be further from the truth. That’s why it’s important to elect Democrats…because they understand that our immigrant history is what has always made America great.”

Later in the day, the Filipino-American Democrats of Las Vegas and Tick Segerblom hosted a Kamayan feast at the United Way of Southern California building, which was attended by candidates Horsford. Sisolak, Rosen, and Lee. Rep. Clyburn, Meng and Perez were also there in support.

The candidates were able to hear firsthand about the issues that Fil-Am voters are most concerned about, including health care, immigration and the economy.

“One of the highlights for me in this homestretch of the campaign has been interacting directly with voters and hearing their concerns one on one…The growing political engagement in Southern Nevada’s AAPI community is impressive and this Sunday I was able to see it first hand when I visited businesses and attended events integral to our AAPI community,” Sisolak told the Asian Journal.

Meng, Perez, Titus and Sisolak also appeared at the Seafood City on Maryland Parkway to meet with Fil-Ams on Sunday. On Oct. 27 and 28, the supermarket will be an early voting site from 9 a.m. to 7 p.m.

“[Early voting] is important and something that the Democratic Party is learning do to better, to meet people where they’re at,” Meng told the Asian Journal. “It’s amazing that we have candidates for governor, Senate, and Congress to come to our communities and meet people.”