“It’s right around the corner,” Kwan told the Asian Journal on Thursday, September 12, referring to the upcoming February 2020 caucus and 2020 presidential election.

That afternoon, the figure skater also hosted a watch party for the Democratic debate that took place in Houston.

For Kwan, who remains the most decorated skater in the U.S. figure skating history, the political sphere is something she’s become familiar with.

In 2016, she joined Hillary Clinton’s presidential campaign. Before that, she was named a public diplomacy ambassador in 2006 under then-Secretary of State Condoleezza Rice, and continued as an envoy under the Obama administration where she worked with Biden and Clinton.

“I never thought that after figure skating, I’d be in politics, but it’s where my passion is,” said Kwan.

“I’ve had the experience of seeing first hand their leadership, what they’ve championed, and who they fought for on a daily basis,” she added.

Now serving as the former vice president’s surrogate director, Kwan said that one of the things that sets Biden apart from the largest and most diverse pool of Democratic candidates is his experience — 49 years to be exact.

“You have politicians who talk the talk, but he walked the walk,” said Kwan. “I look at his past record of getting things done. It’s not easy.”

In an Instagram post following the April announcement of her joining the Biden team, Kwan  cited the Obama administration’s Affordable Care Act, infrastructure, clean energy industries, marriage equality, climate change, and the NRA as being among the key issues Biden successfully took on in his career

The Thursday debate, she shared, took place on the eve of the Violence Against Women Act’s 15th anniversary. Biden later urged legislatures to renew the legislation during the debate.

“He stands apart by experience. From day one, he’s known exactly what to do,” said Kwan.

On the campaign trail, Biden has many times promised to reverse the “disruption and damage” caused by the Trump administration. He’s also warned that another term under the administration would likely result in a “fundamental change” to who the U.S. is as a country.

Kwan agreed on Thursday and said: “With everything that has happened in the some 1,000 days of Trump’s administration, and the many things have happened under him — four years of that, we might be able to undo the damage. But eight years of this administration, it might change who we are as a country.”

‘Champion to the AAPI community’ 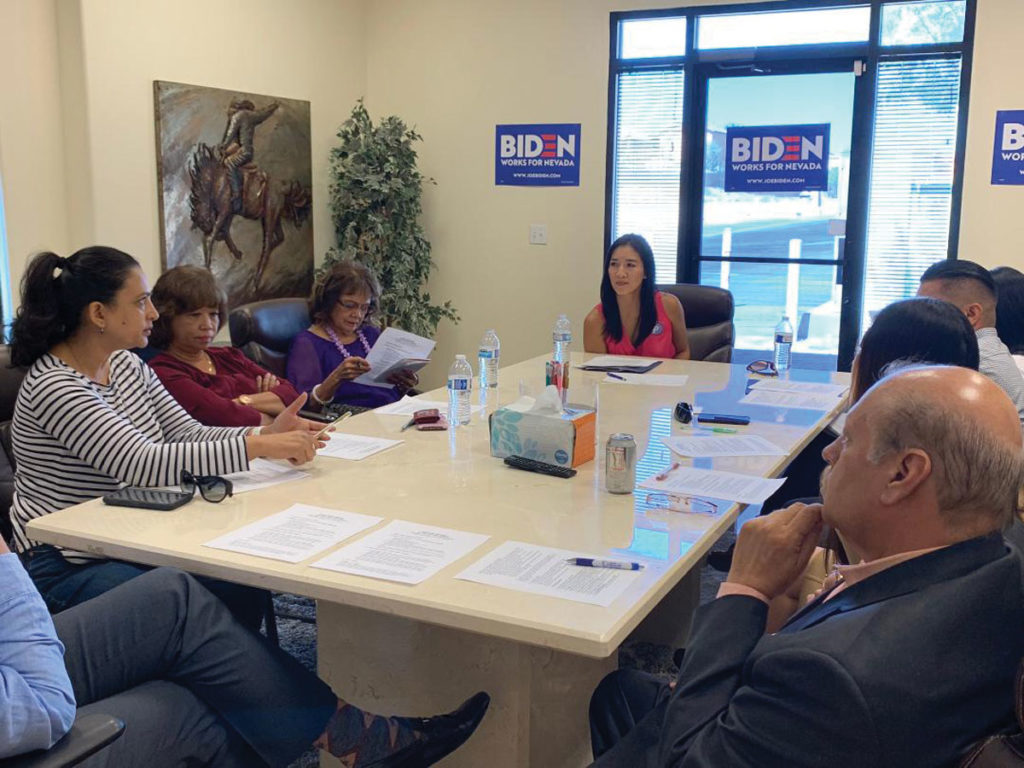 Nevada, which underwent a blue wave during the 2018 midterms, remains an important battleground state.

As the AAPI community continues to be recognized for their overall growth and influence throughout the nation, the same is true in Nevada.

Kwan shared that an estimated 335,000 people make up Nevada’s AAPI community — nearly 10% of the state’s population.

“He’s been a champion to the AAPI community across the board, whether it is the two million AAPIs who benefited from Obamacare or DACA policies, or the 1.2 million who are AAPI and are trying to find a pathway to citizenship,” Kwan said of Biden.

In terms of her own personal reasons for getting behind Biden, Kwan said she often thinks about her parents who immigrated to the U.S. from Hong Kong.

“My folks immigrated to the United States with nothing, talking about the American dream, and about the idea that you can provide a great education for your kids and provide a roof over their heads,” said Kwan.

“It’s hard work and playing by the rules that your dreams can come true, and I think that’s why [Biden] is running to make sure that there is an opportunity for everybody, not just those on top,” Kwan added.

As a message to the AAPI community, Kwan said civic involvement can be as easy as starting a conversation, something she’s experienced in her own family.

“Having that conversation and just talking to my aunts, my uncles, cousins, friends, and everybody. Sharing with them what’s at stake at the election, and how it’s us,” shared Kwan.

Given that the AAPI community has historically shied away from political conversations, she said it was all the more important the community knows how much of an impact it can make on everyday life.

“The AAPI community is such a big community, and they can really change and move the needle one way or another,” said Kwan.

All the small things: Issues that come up in divorce when there are minor children

Money, fear and racism: Navigating the complex relationship between health and hysteria

‘A candidate to unite America’: Why Filipino Americans are coming out in support of Biden’s presidential bid