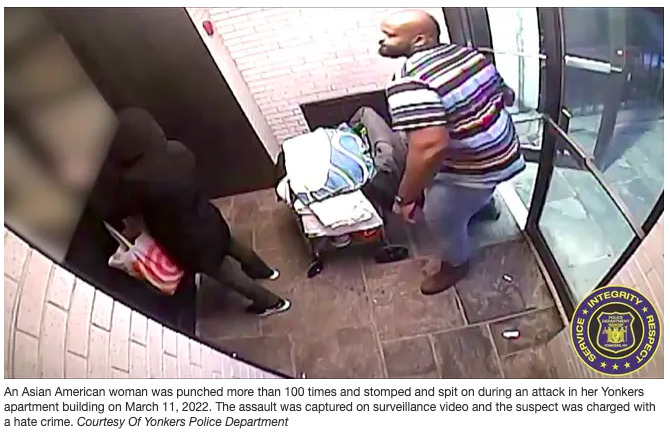 A 67-year-old Filipino woman in Yonkers, New York is now recovering in a hospital after being brutally beaten in the latest anti-Asian hate attack to rock the community.

The victim was entering her apartment building in Yonkers when she was attacked from behind by the suspect. Security video shows the victim was punched 125 times, stomped on seven more times and spat on. She sustained fractures and lacerations to the head and face as well as bleeding in the brain.

The Philippine Consulate General in New York on Monday, March 14 called on authorities “to do more to protect the vulnerable” as it expressed outrage over the violent attack that left the elderly woman seriously injured.

The latest incident took place on Friday evening, March 11, and came a few days after the Consulate reminded members of the Filipino Community to be vigilant and to take the necessary precautions following two shoving incidents in Queens that left two elderly Filipino women injured.

“We are outraged by this unspeakable act committed against another elderly member of the Filipino community,” Consul General Elmer G. Cato said on social media. “This is the third incident in less than a week where elderly kababayan have become victims of random violence.”

“We call on authorities to do more to protect the vulnerable. We remind kababayan to be extra vigilant and to take the necessary precautions, especially in public,” Consul General Cato added.

“Hate crimes are beyond intolerable in our city. I applaud our Yonkers Police for swiftly apprehending this violent criminal and removing him from our streets,” Mayor Spano said in a statement. “I expect the suspect to be charged to the fullest extent of the law for his heinous actions. I continue to keep the victim and her family in our thoughts and prayers.”

Yonkers Police Commissioner John Mueller agreed and called the hate crime despicable and one of the most appalling attacks he has ever seen.

“This defendant must be held to the maximum punishment allowed by law to send a clear message that hateful, violent behavior will not be tolerated in our communities. Our thoughts and prayers are with the victim and her family, that she may make a full recovery.”

In a tweet, New York Gov. Kathy Hochul said, “Everyone deserves to feel safe in our streets — discrimination, hate, & violence will never be tolerated in New York State. I’m praying that the victim makes a full recovery and have offered assistance from New York State Police to investigate this horrific act.”

The suspect, who was identified as Tammel Esco had 14 previous arrests and multiple convictions, was immediately arrested and charged with attempted murder as a hate crime as he was shouting anti-Asian slurs while he was beating up the victim.

Consul General Cato said the Consulate is in touch with authorities in Yonkers and is also trying to reach the family of the victim.

In a statement issued over the weekend, the Consulate expressed concern over the latest incidents that followed similar assaults against other members of the Asian-American Community since the start of the year.

It said that the recent spate of attacks against Filipinos and other Asian Americans—whether triggered by racial bias or mental illness—is a serious concern that must be immediately addressed.

On Thursday, March 10, a Filipina in her late 50s, who walks with a cane and suffers from poor eyesight, was injured after she was shoved down the stairs by an unidentified man at the 179th Street Station of the F Train in the neighborhood of Jamaica in Queens.

On the same day, a Filipina in her mid-60s was pushed by an unidentified man at the Long Island Rail Road (LIRR) train platform, also in Jamaica, causing her to land on her face and breaking her eyeglasses in the process. She sustained multiple injuries.