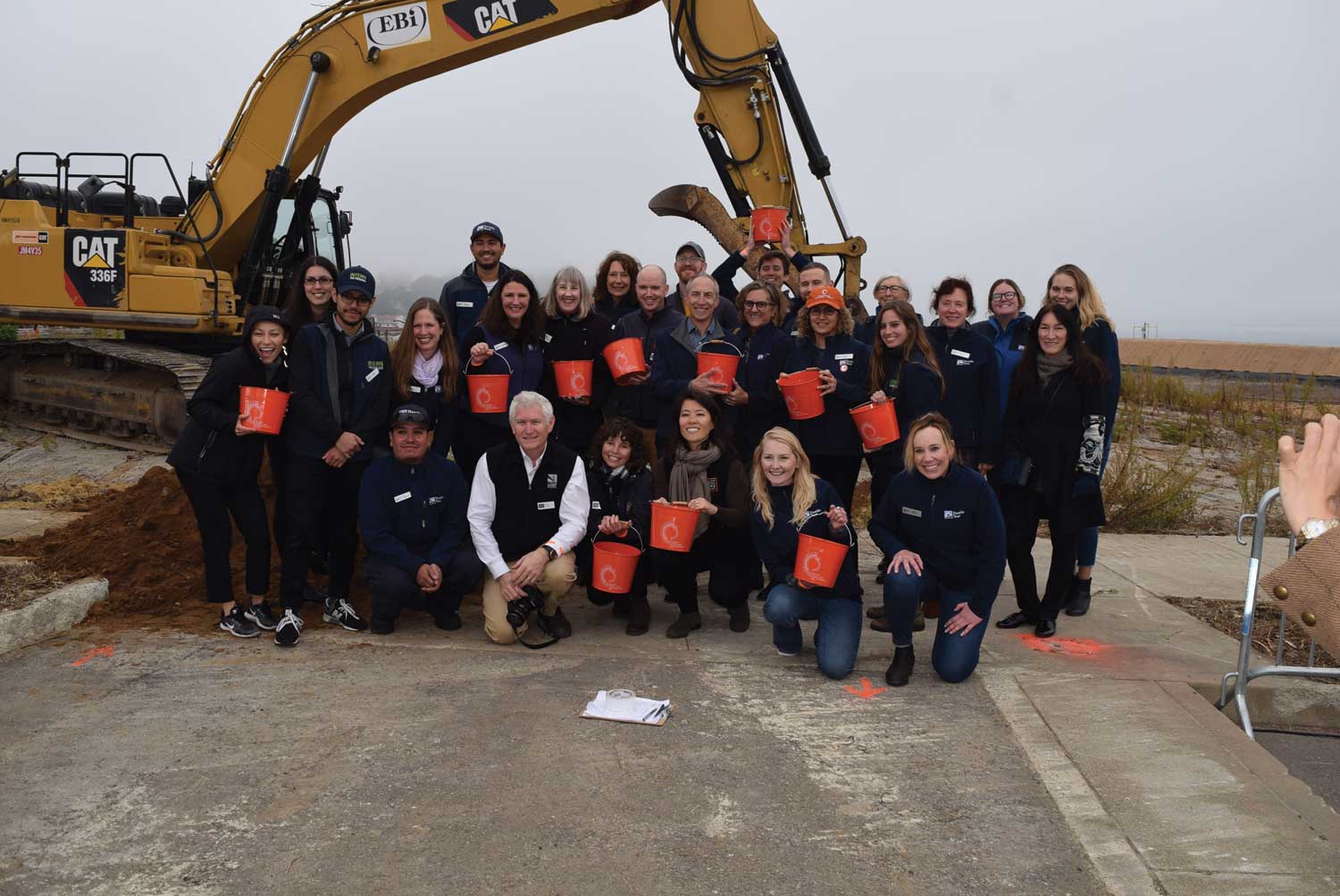 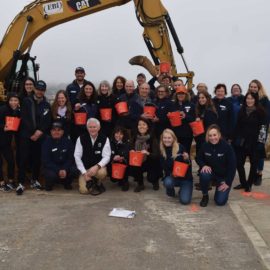 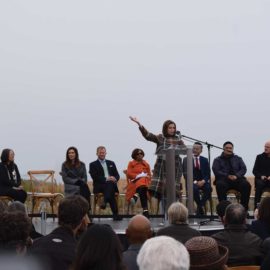 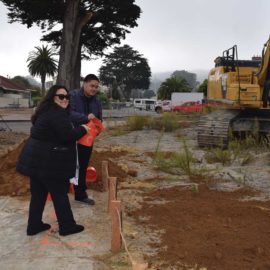 Officials and staff from The Presidio Trust and Golden Gate National Parks Conservancy hold up the pails used to add soil to the ground in the Tunnel Tops groundmaking event. 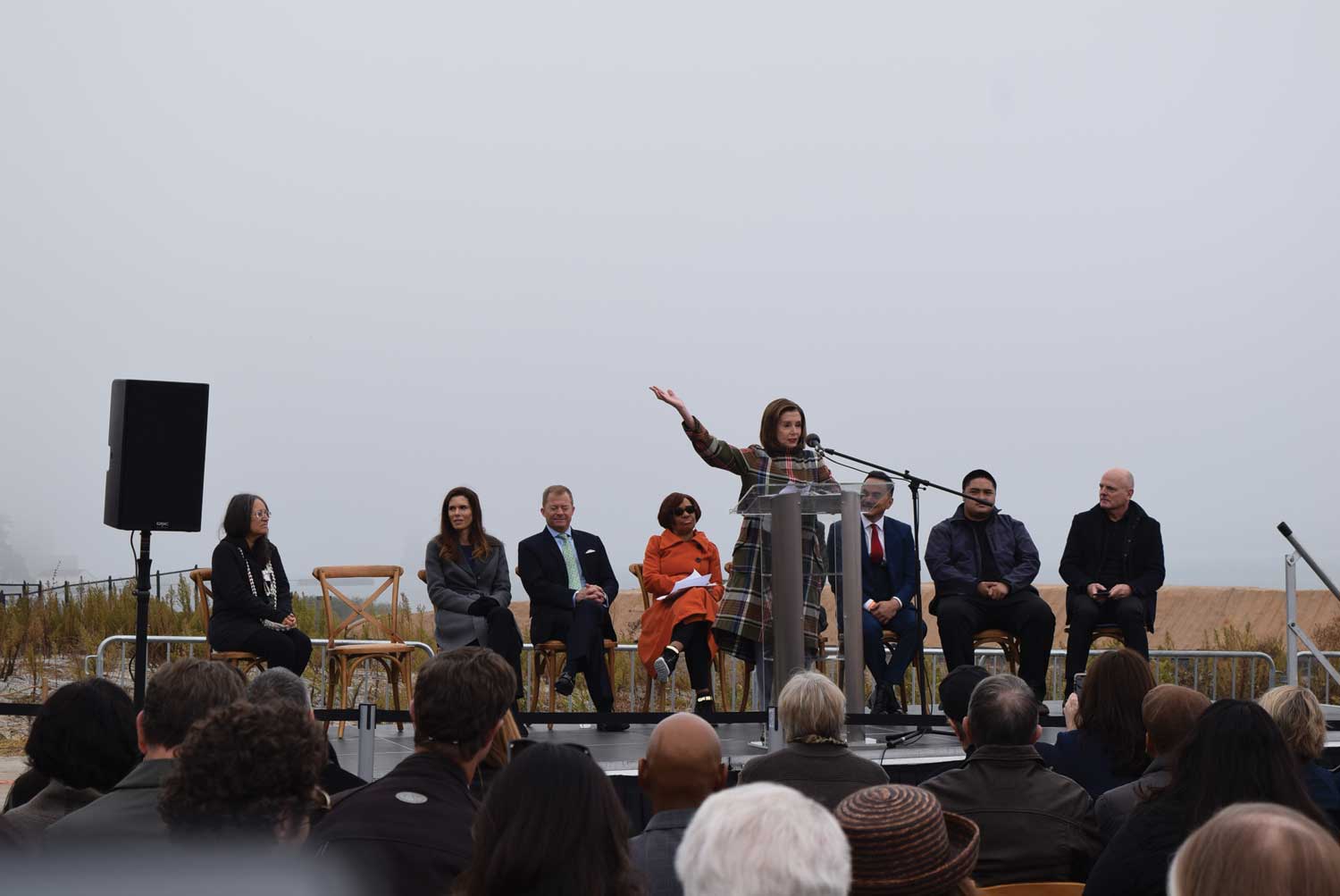 Speaker Nancy Pelosi (at podium) talks about the Presidio’s history and challenges, and stated that the Tunnel Tops project is an accomplishment of national significance. 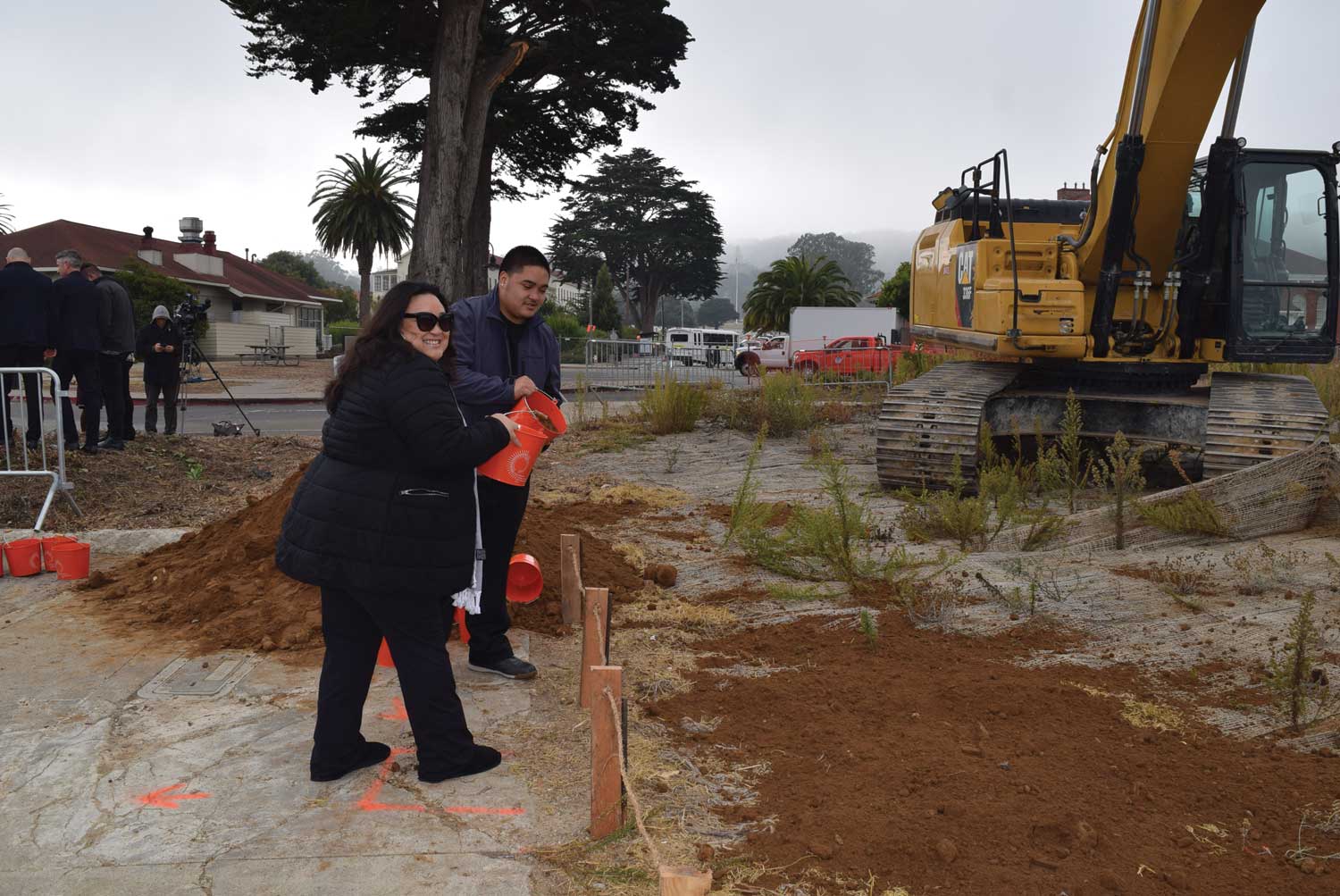 Dylan Nepomuceno and mom Louise, who both have Filipino ancestry, prepare to throw soil to the area which will eventually become the Presidio Tunnel Tops. Dylan was chosen as a youth speaker at the groundmaking event.

HOUSE Speaker Nancy Pelosi was a special guest at the Presidio Tunnel Tops Groundmaking Ceremony in early November which marked the beginning of a two-year construction project that will ultimately create 14 acres of new national parkland on top of highway tunnels and present dramatic, breathtaking views of the San Francisco’s Golden Gate Bridge, its skyline and the bay, and the Presidio area itself.

The United States Congressmember, who represents California’s 12th congressional district which encompasses almost the entire city and county of San Francisco, was among a host of speakers who made brief remarks before invited guests, city residents and media lauding the project. The Tunnel Tops project is expected to add to the city’s already bustling tourism industry, and further boost the revitalization project that has seen the Presidio emerge from its beginnings as a military post in the Bay Area.

In her remarks, Speaker Pelosi briefly touched on the history of the Presidio, how it became part of the Golden Gate National Recreation Area in a bill (the Presidio Trust Act, enacted in 1996), the funding challenges attached to the Presidio becoming a national park, and how philanthropy and support has enabled it to come on its own.  Speaker Pelosi went down the program, acknowledging each of the speakers before her and commended their involvement with the Presidio and its new purpose as a national park.

“This is something quite spectacular and it takes us to a new level – a park example for the rest of the country, a new level of beauty, a new level of inspiration. But, most importantly, a new level of involving young people. If they look at that Golden Gate Bridge as Michele discussed, before even the bridge, was a place where newcomers came to our country, invigorated who we are and that diversity is the beauty of our community here and we want that reflected in this beautiful Presidio as well,” Speaker Pelosi said.

“It is an accomplishment of national significance,” she continued. “God truly blessed America with this Presidio, but especially with the involvement of all of you and what you are doing to make it even better. So, thank you, and congratulations.”

One of the morning’s speakers, Dylan Nepomuceno, who is part-Filipino, told the Asian Journal and other media present, that he was surprised to be chosen as a speaker at the event. His mom, Louise Eleanor Nepomuceno, was born at the Letterman Army Medical Center in the Presidio and Louise’s dad hails from Albay in the Bicol Peninsula.

“I would really want more of the Filipino community to join [the Presidio and Crissy Field Center] and have the experiences that I have had,” Dylan, who credited his mom and the Crissy Field Center as inspirations for his brief remarks, said. “Also, I am very passionate about sharing my culture with others.”

Dylan revealed to the Asian Journal that the youth programs in Crissy Field Center have helped him with his confidence, dealing with bullying, as well as exploring wellness within himself and caring for his well-being. He has also established a close bond with staff members at the center which he considers his second home. He hopes to nurture his involvement with the Crissy Field Center and the Presidio even as he looks at other avenues and opportunities.

Chris Lehnertz, President/CEO of the Golden Gate National Parks Conservancy, meanwhile described what people will expect to see when the Presidio Tunnel Tops project is completed.

“It is like many national parks. There will be beautiful trails, there will be places where you can bring your family and picnic, there will be education programs, there will be a big place to have evening campfires and look at the stars out to the bay and to see the beautiful parklands across to the Marin Headlands,” Lehnertz revealed, while adding that the Presidio Visitor Center will serve as the initial point for visitors in the area as they make their way to various trails, play areas and even Crissy Field.

Lehnertz also said that the park will be open 24 hours a day, seven days a week, and will feature programs geared for the different communities in the Bay Area, for visitors, and for youth/education.

“It will be open to all… if you want to come here to celebrate a holiday, to have a wedding, to just walk the trails by yourself, it’s open for all those reasons… for everyone. What we say is ‘parks for all forever’,” Lehnertz elaborated.

Presidio Trust CEO Jean Fraser, for her part, said the groundmaking event was an exciting moment for all involved as it is “the culmination of years of planning, years of raising money, years of getting community input as to what we should do here.”

“Today, we actually started building it. It was a thrilling day and to have Speaker Pelosi come and participate in the ceremony and talk about the importance of the Presidio and especially the Presidio Tunnel Tops as being of national significance, can’t get better than that,” Fraser said, even as she revealed that the project is due to finish in 2021 and will feature a playground,  barbecue, walking paths, lots of trees and plants, food, and places for people to sit.

Fraser said the Tunnel Tops design involved the input of some 10,000 people as the Presidio set out to ask the community what features they think the Presidio may be missing or need, and which will encourage people to come.

“We wanted to make sure that the Tunnel Tops is a place where everybody would feel that there is something for them,” Fraser elaborated. “For people who want to have family gatherings, we are going to have large picnic benches and areas where people can barbecue. For people who have little kids and want to make sure they someplace to play, we are building a playscape for kids. For people who want a quiet spot just to get recharged and refreshed, there are going to be quiet meadows. For people who love campfires, we are actually going to have a campfire out here. So, everybody loves a park, but people use parks differently. And we spent a lot of time talking to people about ‘How do you use a park and how do we incorporate that into the Tunnel Tops?’.”

Pets, Fraser added, will be allowed in the Presidio Tunnel Tops provided they are on a leash and do not bother other people.

According to information provided by The Presidio Trust, no taxpayer money is being spent on the Tunnel Tops project. The Presidio Trust is providing $20 million, while about $87 million out of the $98 million campaign goal has so far been donated by generous people from the San Francisco and Bay Area through efforts led by co-chairs Lynne Benioff, Mark Buell and Randi Fisher, and the Golden Gate National Parks Conservancy. A public campaign for the community will kick off in Spring 2020.

For more information on the Tunnel Tops, visit www.PresidioTunnelTops.org. Renderings of the project can be found at https://presidiosf.widencollective.com/c/rt0395kq.