LOS ANGELES  – Ambassador Jose L. Cuisia, Jr. together with a topnotch investment mission from the Philippines kicked off the Houston leg of the 3rd Philippine Investment Roadshow in the United States on May 22-23, 2014.

The Philippine delegation, headed by prominent Filipino economist Dr. Bernardo Villegas, will also visit Atlanta and Philadelphia to promote the Philippines as an investment destination.  The Houston investment forum was held at the BBVA Compass Tower headquarters.  The Forum was sponsored by the Philippine American Chamber of Commerce of Texas led by Honorary Consul Ethel R. Mercado and Houston Chapter President Tess Tuazon, the Houston International Chamber of Commerce and BBVA Compass.

The private-sector investment roadshow, initiated by Ambassador Cuisia, seeks to highlight the remarkable feat and success the Philippine economy achieved by highlighting positive macroeconomic developments under the administration of President  Benigno S. Aquino III, encouraging international investors to do business in the Philippines.

The first day of the roadshow, Amb. Cuisia and the Philippine delegation met with officials from the Houston City Hall, MD Anderson Medical Center, and the Port of Houston.  At Houston City Hall, Ambassador Cusia met with Councilmember Richard Nguyen discussing developing economic ties and also to thank him and the Vietnamese-American Community for their continued support to victims of Typhoon Haiyan/Yolanda.

The second day was the highlight of the Roadshow with a 2-hour Investment Forum held at the BBVA Headquarters followed by business-matching meetings.

In Dr. Villegas’ presentation, he cited three (3) factors for the rapid growth of the Philippine economy during the past two years. These are the $25 billion remitted by overseas Filipinos working in over 200 countries and territories around the world; the $15 billion earned by the BPO-BKO industry which continues to grow dramatically; and increased government spending on essential infrastructures.

Outlook for Philippine construction and real estate remain positive, with civil construction expected to grow 61 percent in 2014 and real estate development at 35% according to DMCI President Austria.  He further said that developments in the office, retail, residential, industrial, and hotel and tourism sectors have all contributed to positive growth in the economy. An example of this is the rise in office space needed by businesses, including business process outsourcing.

He gave a detailed and compelling presentation on the attractive investment opportunities for American investors in real estate, construction and infrastructure, engineering and architectural services, as well as Call Centers, Business Process Outsourcing (BPO) and Knowledge Process Outsourcing (KPO).  He described the building and construction boom in the Philippines which does not show any signs of slowing down.

“Manila has overtaken Mumbai as the second leading outsourcing location in the world. Cebu, Davao City, Sta. Rosa, Bacolod, Iloilo, and Baguio also made it to the Tholons list of Top 100 Outsourcing Destinations of 2014,” said Austria.

Mr. Reggie Gray, President of the Houston Intercontinental Chamber of Commerce said: “We are very excited to work with the Philippines and connect Houston businesses.”

The country’s foremost economist and head of the Philippine delegation, Dr. Bernardo Villegas, gave a very comprehensive overview of the positive investment climate in the Philippines, which now experiences an enviable record growth of 7.5% and is predicted to even go as high as 10% to 15% within 10 years. “The 2014 roadshow could not have been scheduled at a better time, now that the Philippines is considered one of the best performing economies in Asia,” Dr. Villegas said. “The Philippines is now regarded as an investment haven by international investors.”

He described the engines of growth of the fastest growing economy among ASEAN countries – the Philippines — as: stable and honest top government, suitable  infrastructure, strong liquidity from the outsourcing industry, high levels of dollar remittances from overseas workers, and excellent workforce. He also gave an intellectual discussion on the challenges facing the country, including the military threat from China, weak national defense and a sagging agricultural sector.

Dr. Villegas also predicted and reassured the audience that whomever the people decide to elect to succeed President Aquino, the Philippines will survive and continue to prosper. “Even if they elect Kris Aquino, a popular movie star, to be the next President (which we hope will not happen), the country will be just fine”, he added.

Aside from bringing more investments to the Philippines, Ambassador Cuisia said he expects the roadshow to further improve trade with the US, the country’s third largest partner. He cited statistics from the US Trade Representative that pointed to growing two-way trade between the two countries—from $13 billion in 2009 to $15 billion in 2010 and $22 billion in 2011.

According to Ambassador Cuisia, the Philippines is the perfect gateway to the ASEAN market of approximately 600 million consumers with a combined GDP of more than $2.2 trillion and an economic growth rate that is faster than the world average in the past decade. He said the region is also the fourth largest export market and third largest trading partner for the United States.

He said American businesses in the ASEAN Region are optimistic that their profit and growth outlook for their firms in the Philippines are very bright and encouraging.

Ambassador Cuisia thanked Consul General Herrera-Lim and the Philippine Consulate General in Los Angeles for helping organize the event along with Honorary Consul Mercado, Tess Tuazon of the Philippine-American Chamber of Commerce of Texas, Gus Mercado of Datalogics and Gary Ilagan of the law firm Munsch, Hardt, Kopf and Harr PC. 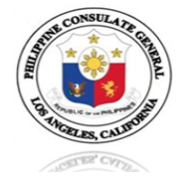 The Consulate General of the Philippines in Los Angeles was established in 1947 to implement Philippine foreign policy within its jurisdiction and foster closer relations with the ever-growing Filipino-American community. It serves the needs of the largest Filipino community in the United States through the following services: assistance to distressed Filipinos, economic diplomacy, issuance of passports and visas, civil registration, notarials and other legal services, and the promotion of Philippine culture.

0
Philippine Consulate General in Los Angeles June 3, 2014
No Comments Yet