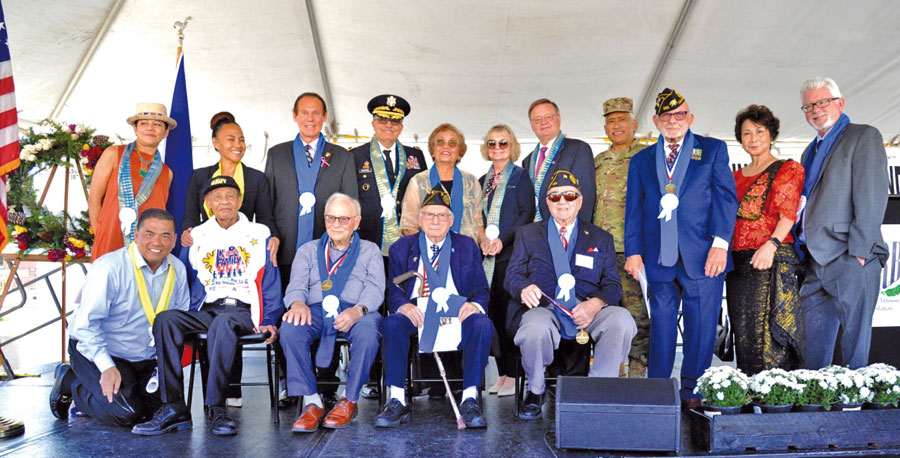 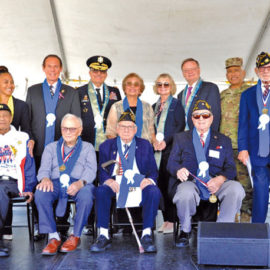 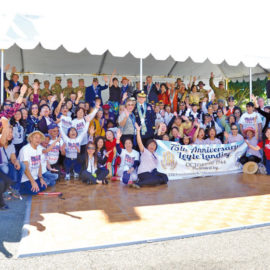 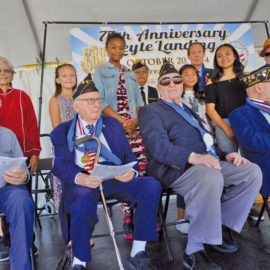 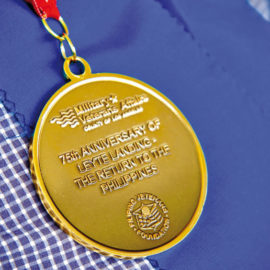 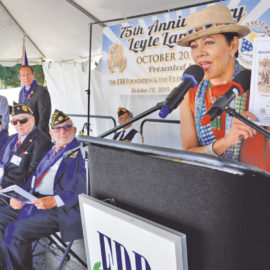 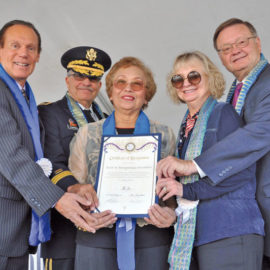 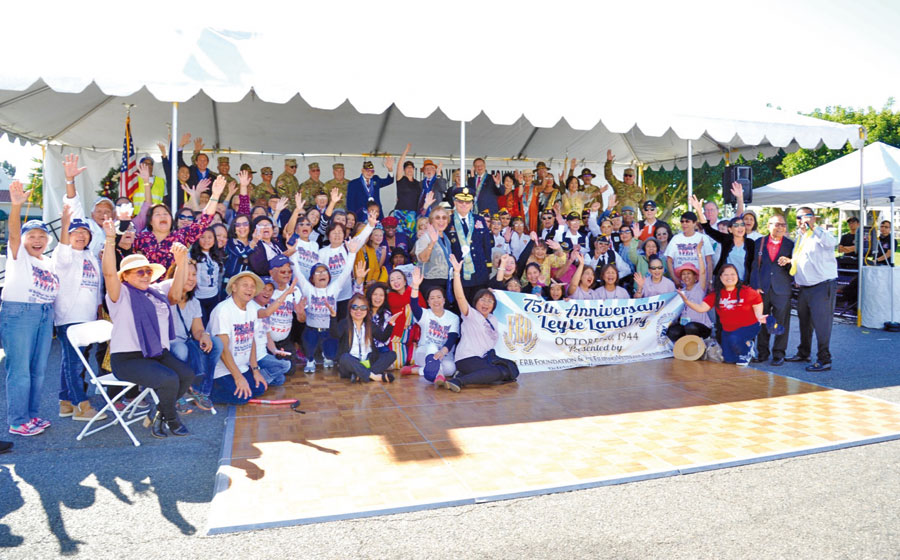 75th Anniversary of Leyte Landing observance was held on Sunday, October 20 at the Carson Community Center. 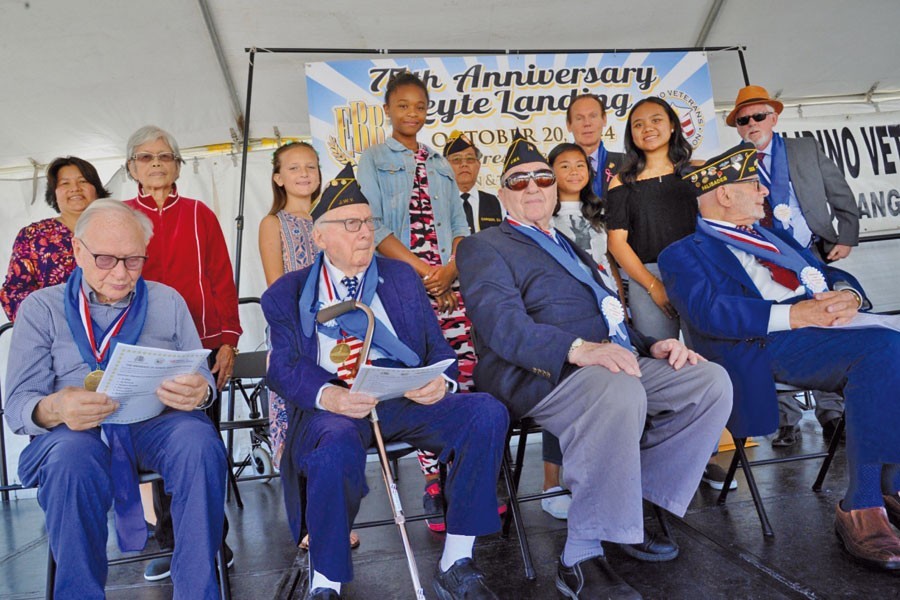 WWII Veterans who landed in Leyte with the 3rd Generation winners of essay and poster contest on the 75th Anniversary of Leyte Landing, held at the Carson Community Center on Oct. 20, 2019. 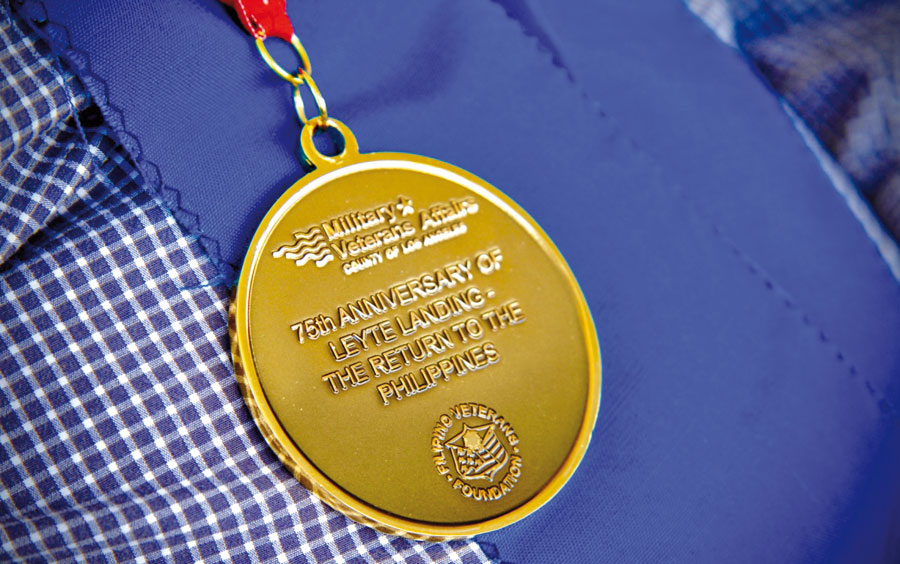 The Medal of Honor and Appreciation for those who survived 75 years since they landed in Leyte. So far, only six medals have been awarded. 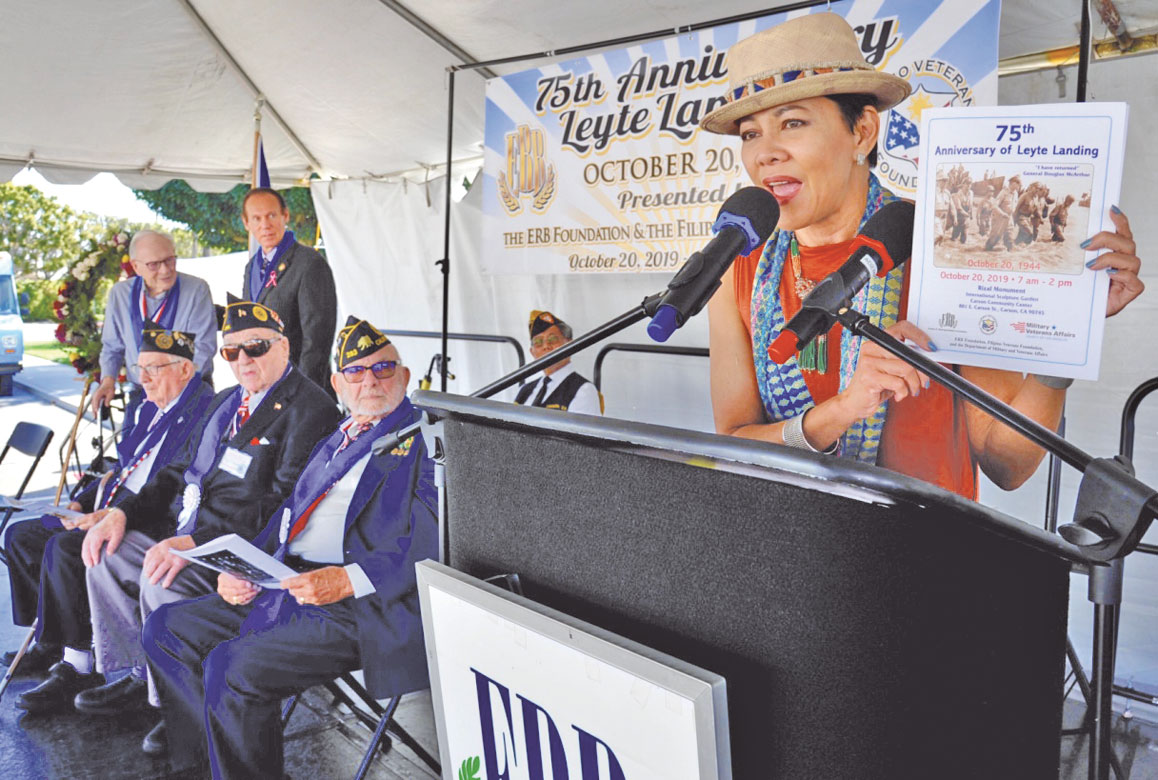 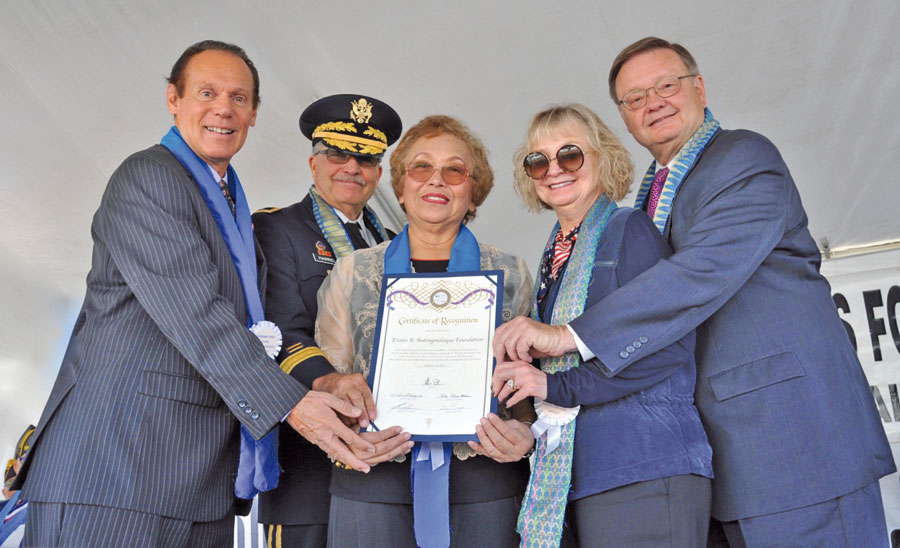 Proclamation of the 75th Anniversary of Leyte Landing in the state of CA promoted by Assemblymember Michael Gipson and supporters.

ON Sunday, October 20, a profound gathering in observance of the 75th anniversary of Leyte Landing was held as Liberators of the Philippines, third and fourth generations, and supporters came together to listen as histories unfolded.

Owning their legacy were the sons and daughters who remembered their fathers’ histories and sorely missed their verbal stories and physical presence. All those who served, living and gone to the ages were celebrated for their service to country, freedom and democracy, on this sunny Sunday of October.

This event was pre-emptied by the awarding of medals to those who landed in Leyte  at the  Bob Hope Patriotic Hall Auditorium in Downtown Los Angeles on Oct. 12. Five were American GIs who recounted their war experiences when they were 17 to 23 years old and still full of vitality retold their stories.

Dr. Jenny Batongmalaque, executive director of the Filipino Veterans Foundation and the Erasto R. Batongmalaque Foundation, introduced the distinguished guests and noted that the legacy of the WWII Veterans cannot be forgotten and this day, on the 75th Anniversary, is an opportunity to thank them for their service.

Judge Wilford Ross gave a historical perspective of Leyte and described  the map of the greatest naval battle in WWII, the Battle of Leyte Gulf. He received the posthumous medal for his father who landed in Leyte when he was 17 years old. His father died two years ago.

Councilman Jim Dear presented a Certificate of Appreciation from the City of Carson to all the Awardees.

The keynote speaker was Gen. John Harrel, who spoke emphatically that in October 20, 1944, we were all Americans. And even through time and tide we cannot deny the lasting relationship of America and the Philippines. He recounted his cousin, whom he never met, was one of those who landed in Leyte and gave his young life to service. When he attended his family reunion  just before this event, he visited the gravesite of his cousin, who died in 1944 as a result of his landing in Leyte.  The Retired Maj. Gen. Harrel started as a Marine for 10 years then shifted to Infantry for 32 years. His ribbons on his chest attested to the many heroic acts while in service.

Gen Ruth Wong, firector of the Military and Veterans Affairs of the County of Los Angeles, presented the Awardees of the medals of honor and appreciation on Oct. 12 at the Bob Hope Patriotic Hall.

The Americans who landed in Leyte were Herbert Bounds, Hy Arnesty, Paul Cohen, and Ernest Cowell.  Absent at this event was Al Altig. The posthumous medal for Wilford Ross, Jr. was received by Judge Ross.

The Color Guards on October 20 was led by Major Frank Quiambao, who presented the 26th Cavalry Support Attachment of the State of California. The Parade of Supporters were the Fleet Reserve left by Romeo Galleon, the Achievers, led by Lilia Bravo and Romeo Bejo, the Lavender Ladies led by Linda Clark, the Carson Lion’s Club led by Dorothy Ross, the Carson Adult Day Care Center led by Paz Velasquez, and the Winners of the Essay and Poster Contest of the 75th Anniversary of Leyte Landing contest.

Alex Cainglet, Chairman of the Filipino American History Month opened the Program, assisted by Arlene Bocatija as emcee. Delia Harvey sang the National Anthems of the Philippines and United States.

Judge Wilford Ross gave a historical perspective of the landing in Leyte 75 years ago, where 200,000 ground troops, 700 ships including 157 warships, transported the landing force.  The difference with the D-Day of Europe was that this did not have air support during the landing.  As the troops landed, one shouted “follow me” and that became the battle cry. Judge Ross pointed at the famous poster of the landing in Leyte. Oct. 23-25 was the greatest Sea Battle of Leyte Gulf.  He pointed at the famous sinking of the aircraft carrier, the USS. St. Lo, struck by the Kamikaze and the survivor, Herber Bounds is here to tell the story in first person. The event was likened to the” David and Goliath” story, with U.S. winning because the Japanese Imperial battleships made a U-turn and left the battle scene.

Dr. Jenny asked a rhetorical question: “Where do we go from here?  When will be the next milestone event?  Maybe on the 80th Anniversary?” Then she called to the stage the participants of the Essay and Poster Contest commemorating the 75th Anniversary.

“The legacy continues when we get the young to get involved and participate in these remembrances and commemoratives, and we will all remember and thank the Veterans for their service,” she said.

The winners of the contest were called to the stage, namely: Gabriella Tapia, 5th Grade,  Jalyn Ward, 8th Grade, Jasmine Ranches – 8th grade, Jezalyn Ranches -10th grade, and Alyssa Suba, collegiate. Special award  went to  Lydia Ty, 82-year-old born in Tacloban, Leyte, who  wrote a poem to pay tribute to the 75th Anniversary of the Leyte Landing. It was read by Paz Velasquez, the coordinator of the contests.

A wreath was laid to those who lost their young lives at the altar of freedom and those who have gone ahead, by Gen. Wong and Gen. Harrel. Maj. Quiambao spoke about the 26th Cavalry Color guards and its commitment to honor those who served in occasions such as these.

A special Guest was Serry Osmena, the granddaughter of President Sergio Osmena who appeared in the iconic picture of Gen. MacArthur’s wading on the shores of Leyte. She acknowledged that as she was listening to the history and meeting the survivors of Leyte Landing on stage, she is compelled to return home and tell her children of the significance of this legacy, and urged all to do the same to their children.

With that last word, everyone sang a rousing “God Bless America.”

A group picture captured the momentous event. Then the block party started to celebrate the living, thanks to those who served and gave us our freedom and our democracy.