FilAm ARTS (The Association for the Advancement of Filipino American Arts and Culture) announced the return of its popular Festival of Philippine Arts and Culture (FPAC), the City of Los Angeles’ official Filipino festival and the longest-running Filipino cultural celebration in Southern California. 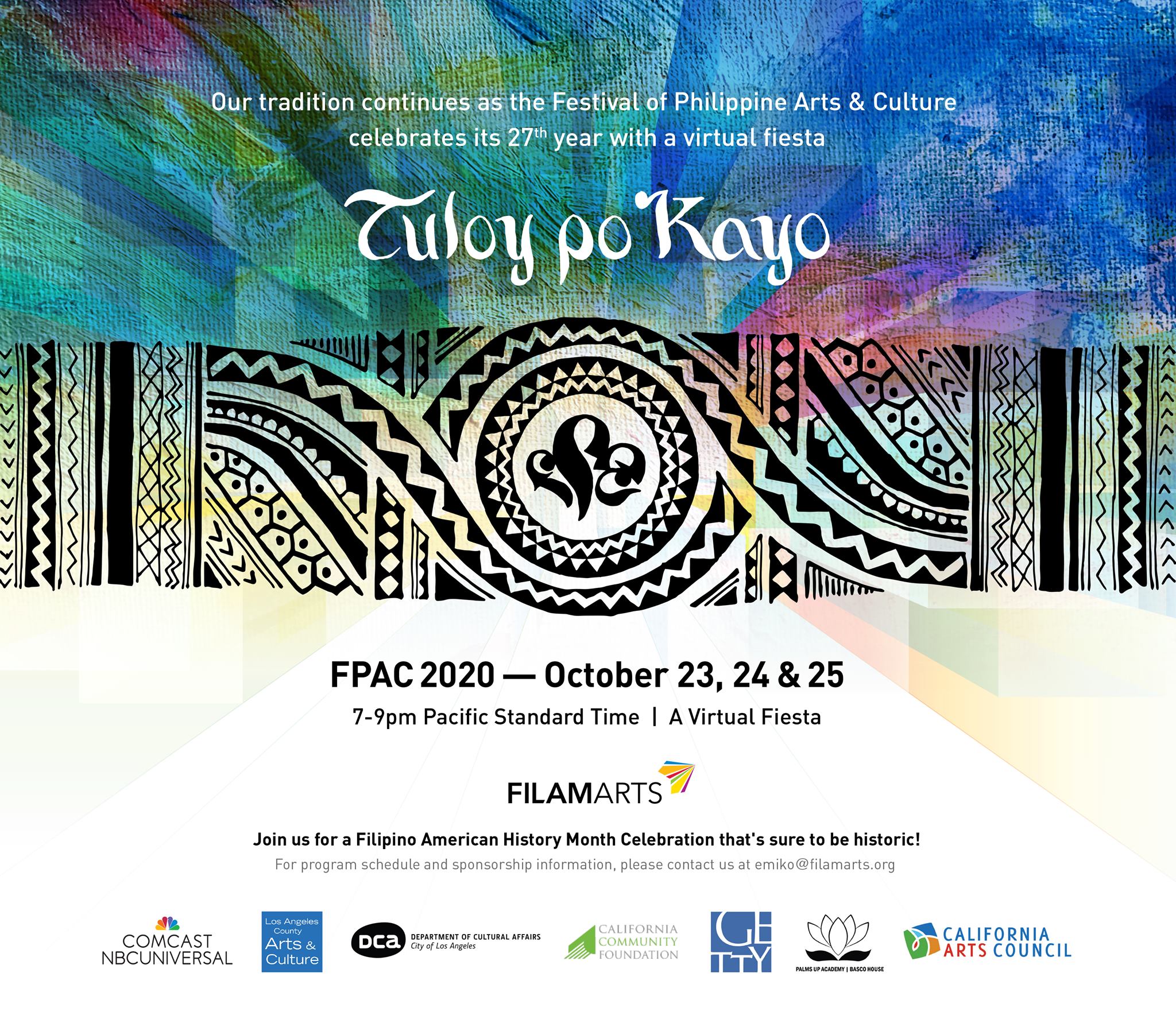 “We’re humbled to have our community celebrate its tradition once again and this year’s theme, ‘​Tuloy Po Kayo’​ couldn’t be more apropos.” said Winston F. Emano, FilAm ARTS Board Director. “Some may recall that the first-ever FPAC in 1993 also came after a period of much uncertainty and over a quarter of a century later, its return is a wonderful reminder to us all of the power of arts to heal and of our culture to affirm. It’s good to be back!”

Premiering a week after the Los Angeles Riots in 1993, FPAC, has presented countless artists in a multitude of disciplines to multigenerational audiences nearing an estimated half-million attendees over the course of 26 years. But, this year marks its first as a virtual presentation.

“We’re excited to debut FPAC on a first-ever virtual stage but, in festival tradition, we continue to spotlight a strong lineup of Filipino and Filipino American multidisciplinary artists,” said Giselle Tongi-Walters, FilAm ARTS Programming Director. “The hard work, long hours and dedication put in by the production team — helmed by award-winning filmmaker, Charles Uy — and our amazingly passionate Festival Builders alike has been nothing short of community-strengthening and inspiring and we are certain that our artists will provide equal inspiration through their art and performances.”

“It’s a blessing in disguise presenting FPAC virtually this year. More people on a global scale get to see what we are doing. When FPAC was presented on a stage, only people here on the West Coast were able to attend the event. We now get to exhibit and discover the artists in a more personal setting through our live streams. Our hope is that we can make people aware that Art is essential. When working and being home during this pandemic, we are either binge-watching our favorite shows or learning how to cook our favorite meals. These were all created by artists. When growing up in Queens, NY, I always wondered what it means to be Filipino American. With FPAC, we get to define who we are through sharing to the world our art and culture,” shared Charles Uy, this year’s Festival technical director.

The 27th Annual Festival of Philippine Arts and Culture (FPAC) will be held over three action-packed days, October 23, 24 and 25 from 7-10 p.m. on facebook.com/filamartsLA, YouTube and filamarts.org. Follow @filamarts on Instagram and Facebook for the latest updates. Official Hashtag #FPAC2020

FilAm Arts is a 501(c)(3) nonprofit organization based in Los Angeles that advocates for FilAm and Pilipino culture by connecting people through facilitating arts and culture programming so that our cultural identity may be properly represented, embraced, preserved for future generations.

Celebrating the ‘past, present, and future’: Filipino American History Month celebrates 30 years of honor and recognition of Fil-Am excellence