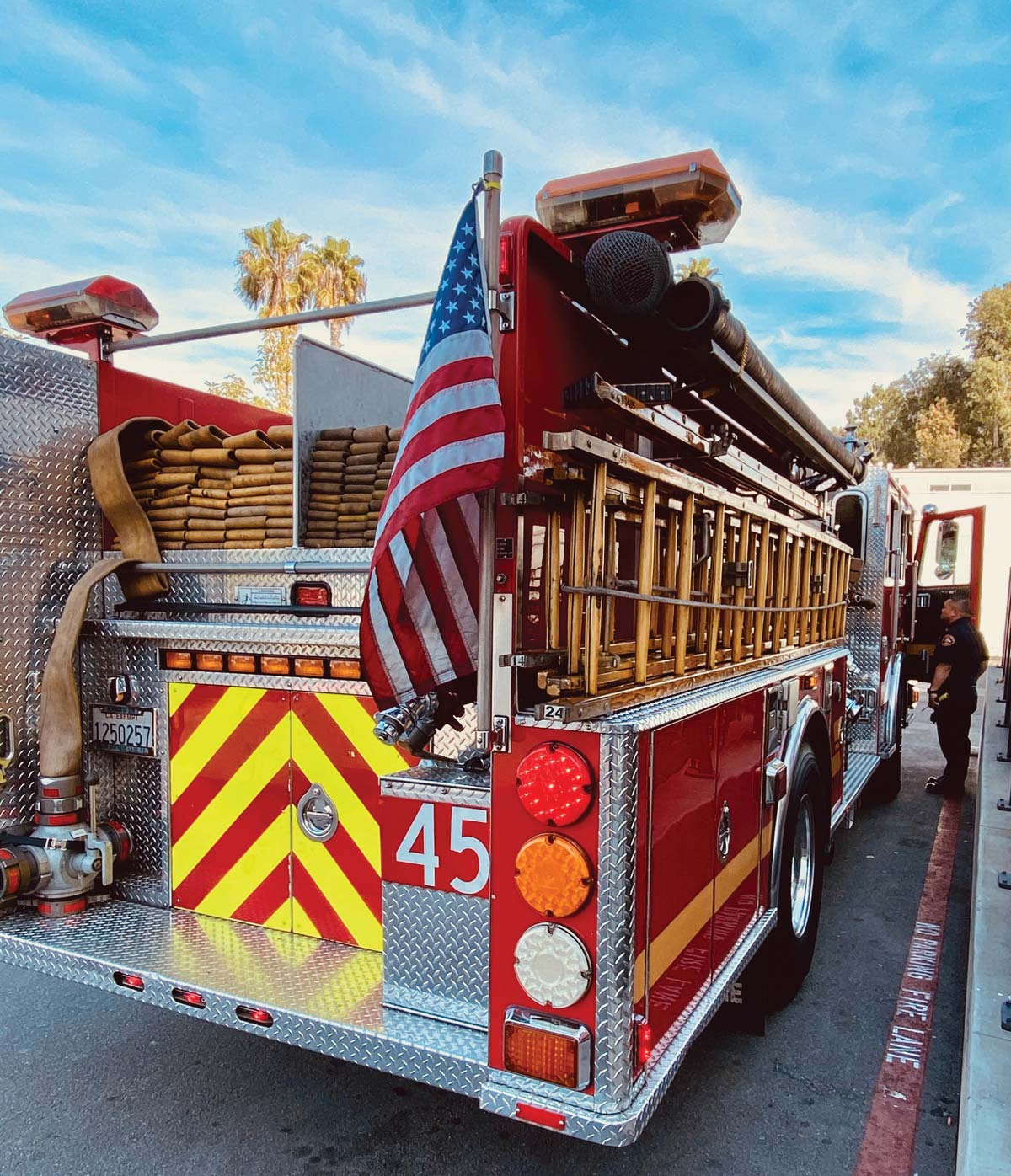 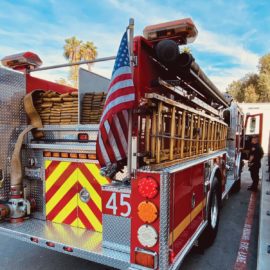 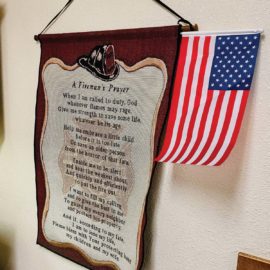 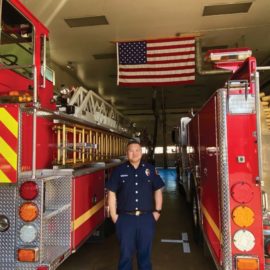 Dantic returns to the fire engine after responding to a call. | AJPress photo by Christina M. Oriel 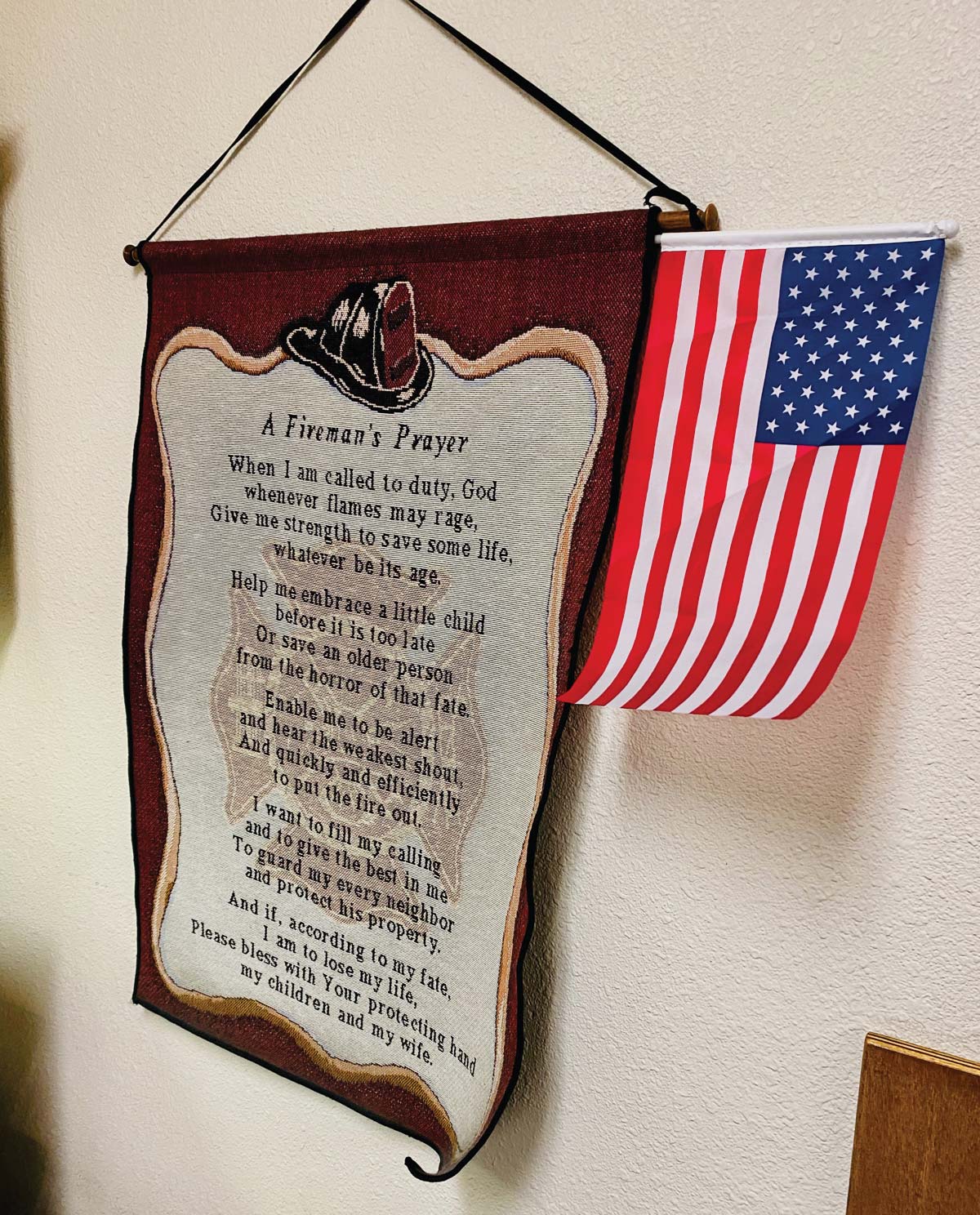 A prayer inside the Station 45 fire house in Lakewood.  | AJPress photo by Christina M. Oriel 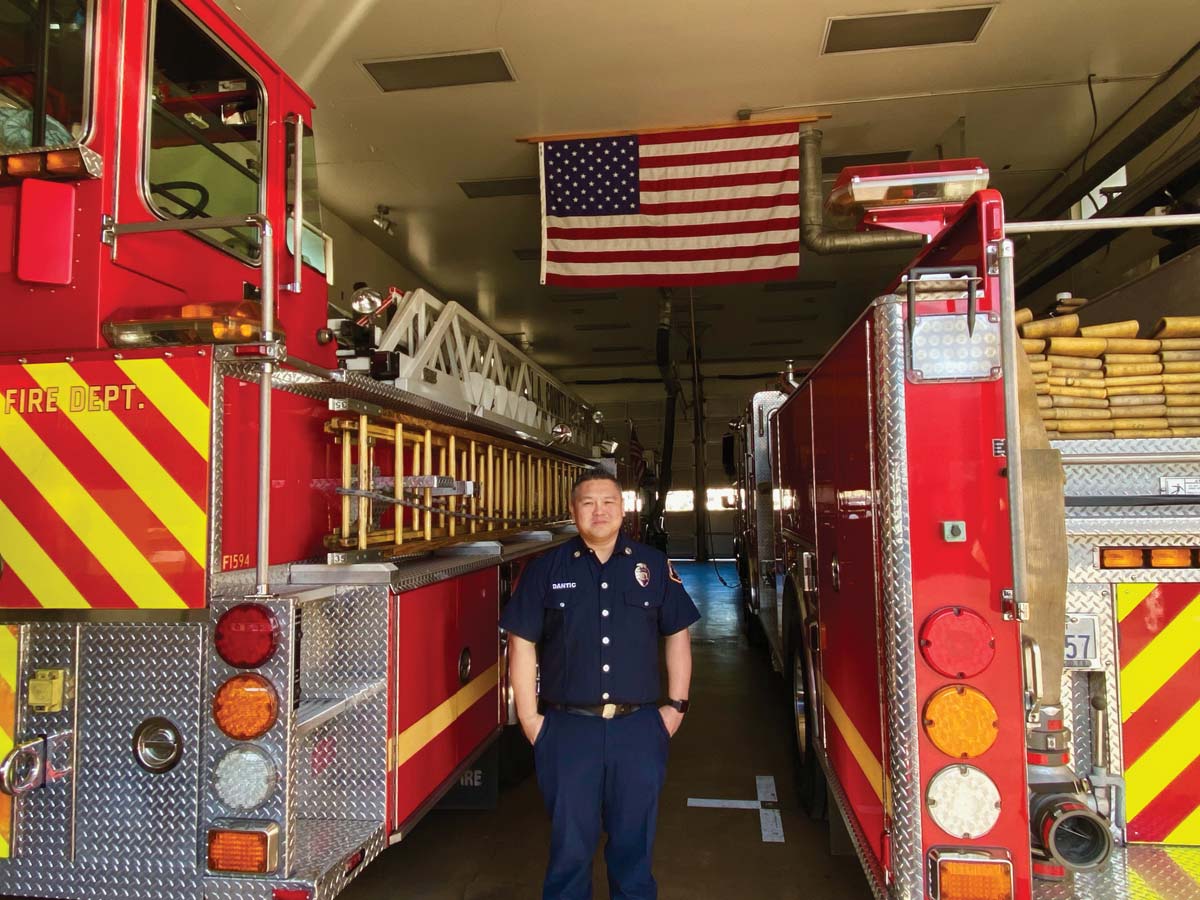 Filipino American fire captain David Dantic of Los Angeles County Fire Department Station 45 in Lakewood, California shows off the station’s two trucks. He is a proponent of Measure FD on the March ballot, which he said will bring updated equipment and communication services to the department. | AJPress photo by Christina M. Oriel

It’s mid-morning on a recent Wednesday and the firefighters at Los Angeles County Fire Department Station 45 in Lakewood, California have returned to home base after conducting safety drills and inspections at the local mall.

When they’re not responding to a 911 emergency, the nine-member fire team trains for possibilities beyond a fire, whether it’s an active shooter or a medical situation.

“People think we just hang out and wait for something to come,” the station’s Filipino American captain David Dantic told the Asian Journal on a ride-along. “We’re always training because we have this saying, ‘Train as if your life depends on it.’”

As the job description of a firefighter goes, they put their lives on the line every single day to save others from danger and disaster. But in order to be safe themselves, planning and having the appropriate resources are key.

“As a captain, my job is to get my guys home safe. I try to look at the bigger picture now, especially during fires. I don’t want to put any of my guys in any dangerous situation. It’s hard to say ‘safe’ when you’re going into a burning building but we want to do it the right way so we train for those scenarios,” Dantic, a 12-year veteran of the department, said. “What gets us into trouble is if we don’t pre-plan anything and we don’t know what we’re going into.”

Located along Candlewood Street, the fire station is on a busy thoroughfare of Lakewood, accessible to nearby schools, public areas and major retailers and establishments. The station houses a dormitory for the firefighters, an office, their lounge and kitchen area, and holds a paramedic squad, one fire engine and one quint, which is the larger truck that has the ladder and jaws of life equipment.

Though the team has been efficient in responding to the various calls they receive daily — ranging from a stroke victim, traffic collision or actual fire — Dantic said their trucks and equipment are still from 2006 and being short-staffed has led them to take on additional shifts.

Firefighters in the county department work 24-hour shifts for a minimum of 10 days a month, which may sound like an ideal situation. However, under any circumstance, especially during heightened fire season in California, they can be recalled and required to work outside of their set schedule.

“It’s not like a regular job where you can take off and they’ll be fine and go on without you. You have to have that body there to help you. That’s a safety issue,” he said.

These are among the reasons why Dantic is pushing for Measure FD — a parcel tax that charges $0.06 per square foot on homes and commercial buildings — on the March ballot, which is expected to generate about $134 million a year to increase staffing and update the department’s equipment and communication systems.

The breakdown of Measure FD

The measure requires approval from two-thirds of local voters.

The LA County Fire Department, which services 4.1 million residents, is the fourth busiest fire department in the United States after New York, Chicago and LA City. It provides emergency medical services, fire and rescue services and safe haven services for 58 cities and unincorporated areas of the county.

In 2017, the county received nearly 400,000 emergency calls and that number has been increasing, according to LA County Fire Chief Daryl Osby. From 2008 to 2018, the fire department reported a 50% increase in emergency medical incidents, while there has been a less than 5% increase in paramedic squads.

The last time voters in the county approved a property tax increase that would benefit LA County Fire was in 2000, so firefighters and paramedics since then have been funded through contracts with 11 of the 58 cities in the county and existing property tax revenue, the Asian Journal previously reported.

The department said it would increase the number of firefighters and paramedics on duty, acquire more emergency tools for car accidents and other medical response situations, repair fire stations, and update its communication systems by using real-time mapping software and other sophisticated technology to improve response times from 911 calls.

The systems would also reportedly make it easier to communicate with emergency rooms and trauma centers to provide information when transporting patients.

Senior citizens, non-profit organizations, and government buildings would be exempt and the tax would be capped at 100,000 square feet. It would be limited to a 2% annual inflation adjustment.

Robert Gutierrez, president of the California Taxpayers Association, wrote an OP-ED for the Daily News, saying that the association opposes Measure FD because it would make it “more expensive to buy or rent a home or business” and “increase the cost of utilities” at a time when housing affordability is a concern for many county residents.

“The average home in Los Angeles County is 1,500 square feet. At 6 cents per square foot that equals $90 per year or 25 cents a day per household. It will cost a family of four a nickel each per day to increase paramedic services, faster emergency services response and up-to-date 911 communications to their community,” Dantic asserted. “Currently our equipment in our dispatch center is 30 years old, which is well before the introduction of mass cellular technology.”

No day is the same as it’s hard to predict what kinds of calls will come in. The firefighters could be in the middle of a workout or cooking a meal, but they must drop that within seconds and get into the truck once the red light in the break room blares. (On this particular day, emergencies within an hour-span included a call from the nearby high school and another medical emergency at Walmart.)

Shifts change around 8 a.m. when the firefighters receive a briefing from the crew they’re relieving, begin checking their equipment, and have a line-up meeting to discuss the day’s agenda led by the fire captain like Dantic.

In between calls, they have chores around the station, such as cleaning the restrooms, vacuuming floors, and preparing dinner for the team — a firefighter is selected each day to cook the meal.

“Another big misconception is people see us out at the market and think they’re paying for our food. We all pitch in like $15 and whatever we have leftover, we’ll bank that for another time,” Dantic said, adding that they also split costs for things around the station, like the TV and cable.

One aspect of Measure FD that Dantic wants to underscore is that funds will be allocated to recruitment efforts to ensure that the fire department reflects the communities it serves and to expand staffing.

Dantic said this would help address some staffing issues observed at the stations he’s been assigned to over the years, especially for the medics who get around 20 calls per shift. Currently, Station 45 has two people handling the medical calls and oftentimes, they have to respond to ones in nearby cities as the closest squads are in Cerritos or Paramount.

“I take pride in patient care. We get a range of calls but it’s still an emergency for them. We say we want to be there in eight minutes, but we aim to be there as soon as possible, especially in a fire,” the Fil-Am fire captain said.

In his time with the department, Dantic started off as a firefighter paramedic and has since held roles as a firefighter specialist inspecting buildings for preventative measures and a public information officer before being promoted to his current role as fire captain.

“You can be driving a fire truck, a paramedic or public information officer. You can say you’re a firefighter your whole career but there are so many options you can go through,” he said.

As Dantic will be moving in the coming month to be captain of South Gate’s Station 54, one of his missions is to get more Fil-Ams to join the department. He estimates less than 100 firefighters are of Filipino descent in the county, though the department did not verify the exact number, as of press time.

“That’s something I’d like to address. People don’t see it as a career option or aren’t exposed to the benefits of being a firefighter. For many Filipinos, they see jobs like nursing and go into that and it gets passed down generations,” Dantic said. “It’s nice to see someone in a profession who looks like you and has a similar background.” (Christina M. Oriel/AJPress)

Not settling for less

What bankruptcy can and cannot do for you