Located near the El Pueblo Historical Monument, the housing located at 711 N. Alameda St. is the first of a series of projects planned for construction across Los Angeles to bring homeless people indoors. To date, dozens of sites across the city are being explored by the City Council.

A Bridge Home sites will offer immediate beds, showers, mental health services, restrooms, storage facilities, and pet accommodations, as well as around-the-clock, on-site care for Angelenos who are sleeping on the street now and awaiting supportive housing or other long-term care. The initiative is a critical piece of the L.A. region’s overall efforts to build a comprehensive system to bring homeless Angelenos indoors.

“We are here to help people in desperate need get themselves on a bridge that goes in one direction — toward housing and healing,” said Garcetti. “Angelenos have freed up more resources than ever before to help our homeless neighbors recover from the trauma and poverty that forces them onto the streets. Today, we have one message for the men and women who will soon move into this facility: Welcome home.”

This site will be occupied by people from existing, high-density encampments in the immediate surrounding area. New residents of the site were identified through unprecedented outreach efforts by specialized teams who walked the streets of the El Pueblo neighborhood every day for the previous three months — to identify homeless Angelenos already living in the community, and prepare them to move indoors.

“In Council District 14, we have and will continue to work with our partners on creative solutions to end the despair of homelessness,” said Huizar, co-author of Measure HHH, and a leading voice on the City Council in addressing homelessness. “Given that we are blocks from Skid Row, the largest homeless encampment in the nation, it is fitting that the City’s first Bridge Home site be located in Downtown. Let hopelessness end here for these residents, and let’s open our City’s collective arms and share that hope with the thousands more who will follow.”

The site at El Pueblo is run by The People Concern, a social services agency that has operated in and around the Downtown LA area for more than 50 years. The facility is furnished with on-site mental healthcare, substance abuse support, connections to permanent housing, career services, and 24/7 security, and staffed by case managers from The People Concern at all times. It will stand for three years — enough time for the City to build supportive housing for the Angelenos living in it. 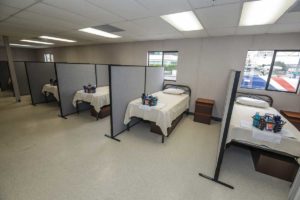 A Bridge Home is the community working together to bring services to those who need it most and empower individuals to rebuild their lives,” said John Maceri, CEO of The People Concern.

After the new bridge housing opens its doors next week, and the first 45 residents move in, City Sanitation teams will work to restore spaces previously occupied by encampments into clean and accessible public passageways.

The site was designed pro bono by M. Arthur Gensler Jr. & Associates, and includes a community garden, a pet relief area, offices for meetings with case managers, and an outdoor community space where meals will be served three times a day.

“As architects it was important for us, as part of the Downtown community, to step up and help make this crucial project become a reality,” said Rob Jernigan, Co-Regional Managing Principal at Gensler. “We’re all affected by homelessness and as Angelenos we are proud to play a small role in helping our fellow citizens battling this issue.”

In total, the mayor’s budget includes more than $450 million in supportive housing, bridge housing, services, and facilities to help homeless Angelenos find their way under a roof and off the streets. That represents a 147 percent increase over last year.

The mayor also fought for — and won — funding from the State’s budget surplus to help cities across California find, build, and expand housing for their homeless populations. Thanks to that effort, Los Angeles County alone will receive $166 million from the State to bring our unhoused neighbors indoors.

In April, Garcetti and the City Council declared an emergency shelter crisis and took advantage of a new state law that enables cities to construct bridge housing — faster than ever before — on any land owned or leased by the city.

Garcetti signed an executive directive in May requiring city departments to fast-track temporary shelter projects from application to construction, allowing those that meet legal and environmental standards to open their doors in as little as 32 weeks. The city will guide these projects from start to finish.

With Garcetti’s support, Huizar is pushing forward with a plan to identify other emergency locations in Downtown LA to house approximately 2,000 unsheltered Skid Row residents in City-owned buildings or available private properties — such as the old Children’s Museum located at the Civic Center near City Hall, and a private lot on Paloma Street, in partnership with LA County. (AJPress)

Los Angeles released its own earthquake-warning app, the first in the US