A Filipina American mother of three in Chula Vista, California has been missing for almost a month, but her family is not giving up hope that she will be found.

May “Maya” Millete, 39, was last seen by family at her home in the San Miguel Ranch area on January 7 and was reported missing two days later.

That Saturday, the family was planning a trip to Big Bear Mountain Resort for her daughter’s 11th birthday, but Millete was never heard from.

Millete, a civilian Navy employee, is described as 5-foot-2 and about 105 pounds with brown hair, brown eyes, freckles and a wrist tattoo. In addition to her 11-year-old, she has children ages 9 and 4, and lives with her husband Larry.

Her husband reportedly thought Millete was asleep in a bedroom, but then he found the room empty, according to various reports.

Her sister Maricris Drouaillet told the Asian Journal that the last time she and her siblings heard from Millete was on Jan. 7 when they were all on a group chat talking about the birthday trip.

“It’s just a shock and it’s been a nightmare since we reported her missing,” Drouaillet told the Asian Journal.

Drouaillet said Millete loved the outdoors and hiking so it is possible she had gone out by foot that day.

Her car has remained at the home’s driveway and her phone has been turned off and has not been located, a GoFundMe page organized by her family said. She appeared to have taken her ID and credit card as well, but no transactions have been recorded.

Over the weekend, police served a search warrant at Millete’s home with the goal of locating any evidence into her whereabouts.

“I can’t give any details as to the investigation but I will say we’ve been actively investigating this case and we’re at the point now where we’re trying to get as much evidence and any clues that we have that it’s possible to find where May is,” said Lt. Miriam Foxx with the Criminal Investigations Division.

Millete’s family has held community searches and vigils, and has posted flyers in the neighborhood and in the greater San Diego area. However, the recent weather conditions have hindered some search activities. 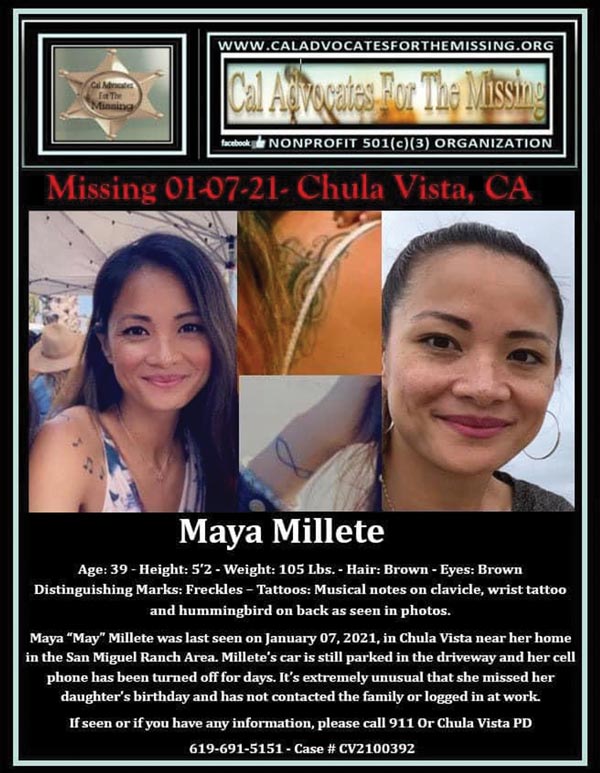 The GoFundMe page, with a $30,000 goal, will be used for the investigation, search efforts and printing fliers.

The family encourages others to say a prayer at 5:01 p.m. — her birthday is May 1 — until Millete is found.

Those who know her say she has a bold personality and is full of life, and that she was a doting mother.

“She’s an amazing mom. She has three wonderful kids and it’s her life…she wouldn’t leave her kids this way,” Drouaillet said.

Anyone with information on Millete’s whereabouts is asked to contact the Chula Vista Police Department at 619-691-5139 or San Diego Crime Stoppers anonymous tip line at (888) 580-8477. (AJPress)