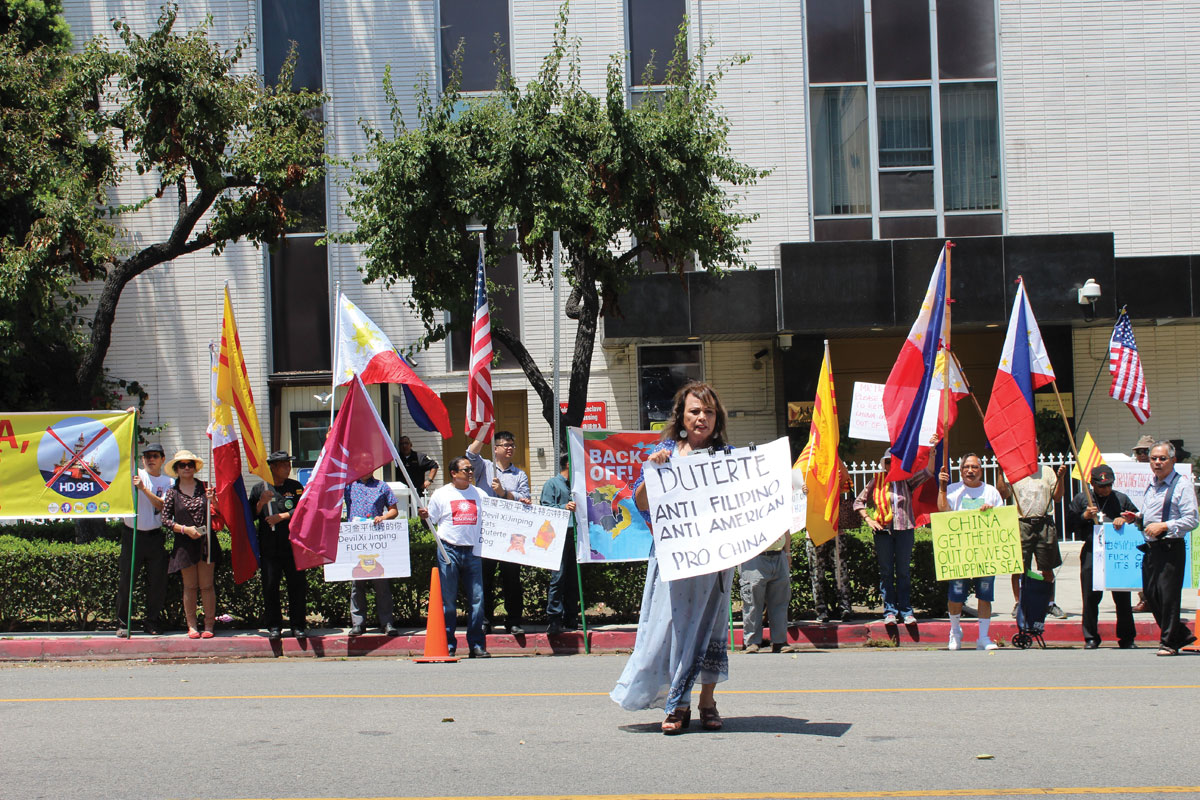 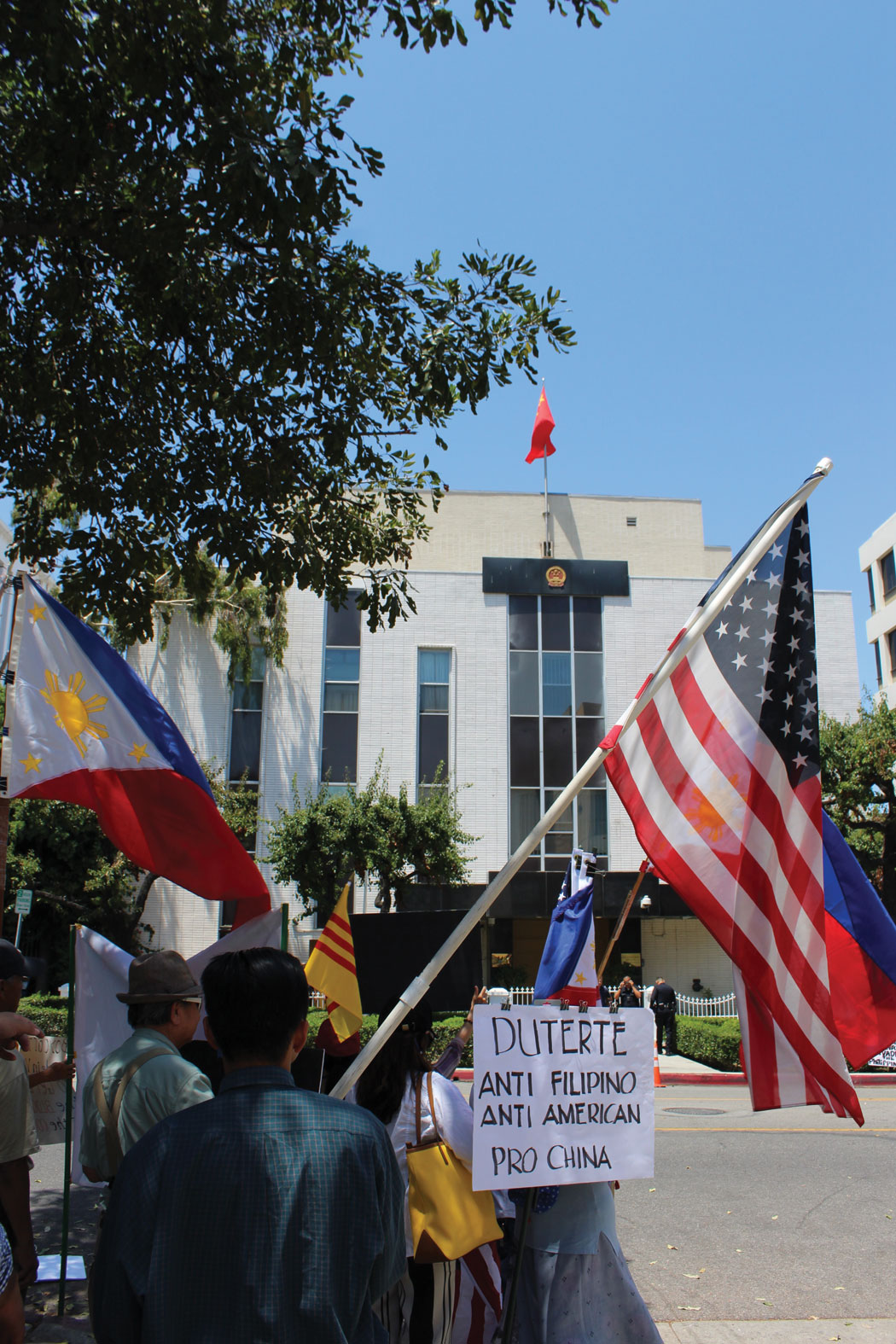 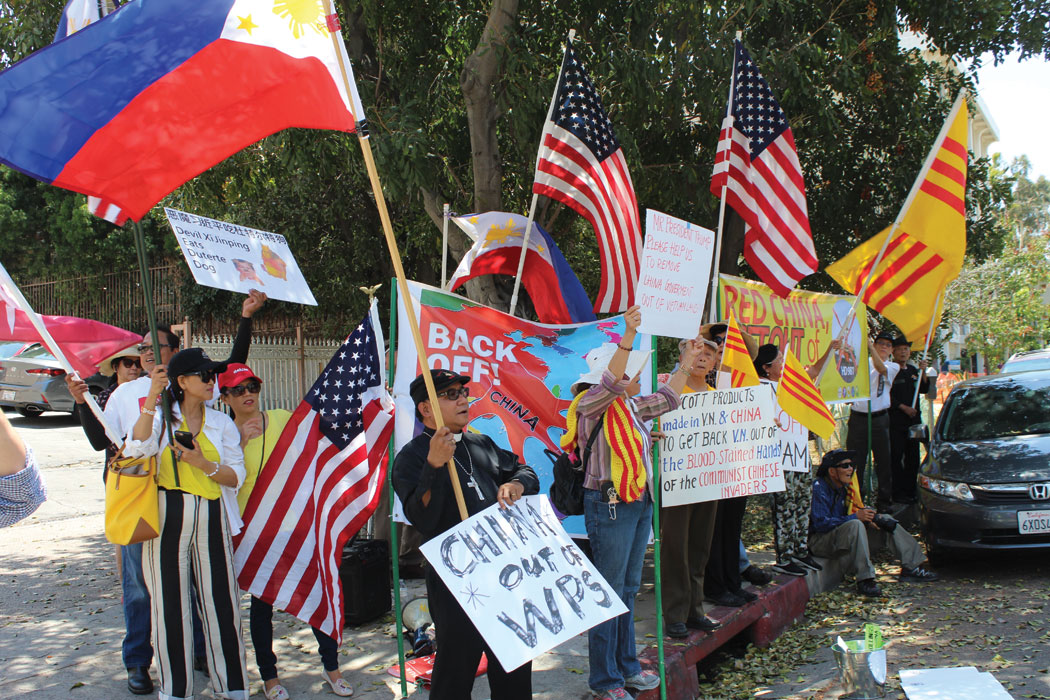 “Get out of the Philippines!” protesters chanted outside the Chinese Consulate, causing a stir along Shatto Place. 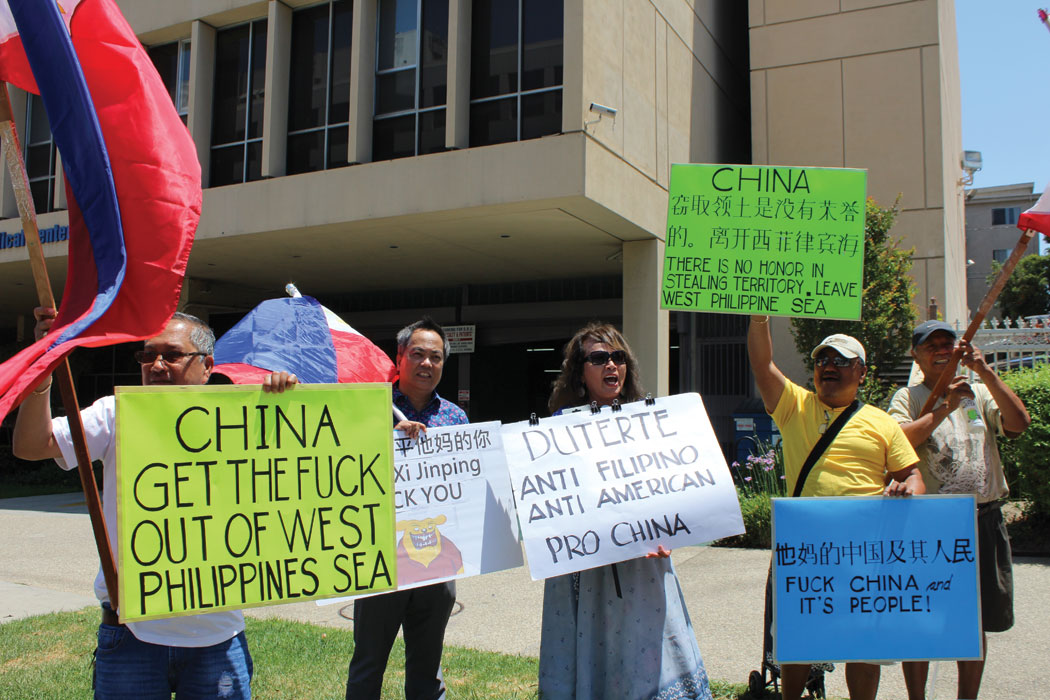 One of the organizers, activist Vange Lara, directs the group of protesters across the street. The Los Angeles rally was one of several global protests against China’s refusal to recognize the 2016 ruling at the Hague that the West Philippine Sea/South China Sea should remain international waters. AJPress photos by Klarize Medenilla

Raucous protest calls for Fil-Ams, US lawmakers to stand with the Philippines on the second anniversary of the tribunal’s ruling

On Thursday, July 12, Filipino activist groups staged a worldwide protest which had three purposes: encourage other Filipinos to rally against China’s claims, urge U.S. lawmakers to assert “freedom of navigation,” and call on Duterte to maintain The Hague’s 2016 ruling.

For years, the Philippines has contended that the body of water — which includes islands, reefs, banks and other maritime features and viable resources like oil and natural gas —  to remain international waters and should not belong to the People’s Republic of China.

The territorial dispute dates back to the 1970s but has escalated in recent years. In 2016, an arbitration tribunal conducted by The United Nations Convention on the Law of the Sea (UNCLOS) ruled against China in Philippines v. China, but that tribunal did not declare ownership or boundaries of the region.

In Los Angeles, a small but determined group of Filipino and Vietnamese protesters gathered in front of the Chinese Consulate in Koreatown garnered much attention from passersby as they ranted and raved well into the street, prompting cops to intervene.

Organized by community leaders Art Garcia and Vange Lara, the group of high-spirited activists demonstrated their contempt on Thursday for the Chinese government’s refusal to recognize The Hague’s July 2016 ruling. Moreover, the protests are a condemnation of the recent spike in militarization of China in the West Philippine Sea region.

“The imminent threat now is the occupation of China of seven islands in Spratly and the Scarborough Shoal, and it is the most potent threat to [the Philippines’] national security,” community leader Art Garcia told the media at the rally, adding that China has “turned islands into missile batteries” which is “a real threat to all Asian countries.”

The July 12 protest exemplifies the global Filipino community’s fervor for China to back off in the dispute and for Duterte to contend for the Philippines’ jurisdiction over the West Philippines Sea.

According to a recent survey from Pulse Asia, 73 percent of Filipinos agree that the “the Duterte administration should assert our rights and protect our territorial sovereignty” in the conflict.

“Now we are Filipino Americans, and we live here, so we have an opportunity to approach the lawmakers of the greatest democracy in the world and hopefully someday they will understand what’s going on in South East Asia because the impact is not only for Asian countries. The impact is global,” Lara shared with reporters at the rally.

The United States government sides with the tribunal ruling and the Philippines on this issue, with a group of U.S. senators — Sens. Marco Rubio (R-Fla.), Cory Gardner (R-Colo.) and Ed Markey (D-Mass.) — recently condemning China’s rapid militarization of the South China Sea.

In May, the senators has been urging the defense and state departments to respond to Beijing on this issue, and have also condemned President Donald Trump’s proposed trade deals with China, in part, because of the maritime conflict.

“By placing weapons on these artificial islands—Fiery Cross, Subi Reef, and Mischief Reef—China has increased the risk of conflict between itself and the five other claimants in the Spratlys,” the senators wrote in a letter to Secretary of State Mike Pompeo and Secretary of Defense Gen. James Mattis on May 25. “Moreover, the missiles that China keeps in the Spratly’s are not solely for defense. Increasing its offensive firepower in the South China Sea gives the Chinese government an additional element of coercion in its disputes with its neighbors, including our allies in the Philippines and our partners in Vietnam and Indonesia.”